Discussions of “stranger danger” can obscure the structures of gendered power, including state and domestic violence. 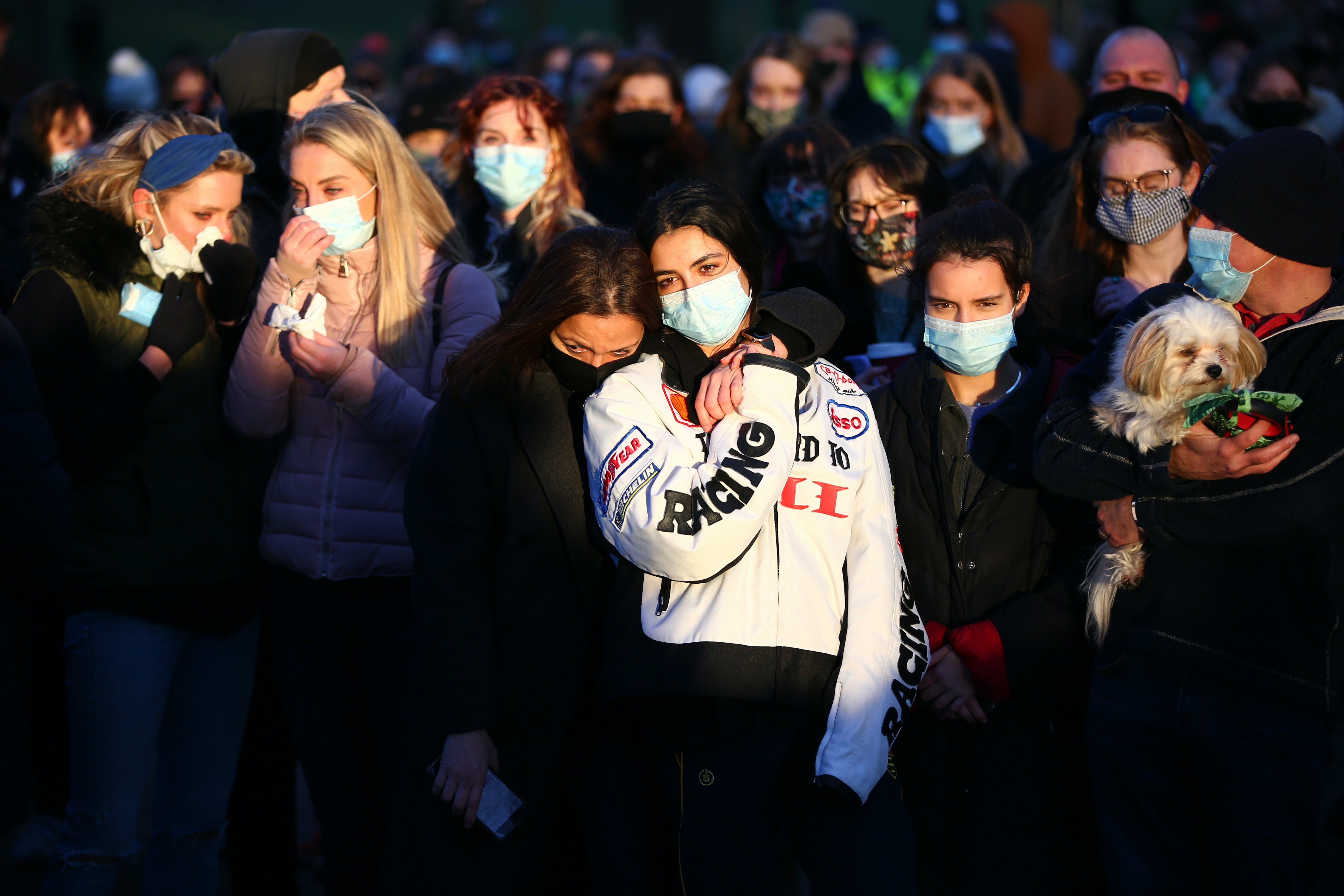 People gather at a vigil for Sarah Everard at Clapham Common in London on March 13, 2021. Metropolitan Police officer Wayne Couzens has been charged with her kidnap and murder.

On Saturday night, members of the London Metropolitan Police aggressively disrupted a vigil held for Sarah Everard, a 33-year-old English woman who was kidnapped and murdered this month. It was on the nose: The mostly young women — gathered in the name of public safety to share anger and grief at the death of a young woman who was killed while walking home alone — were manhandled, shoved, and held down by cops also in the name of public safety.

Before footage of police violence at the vigil began to circulate, the role of cops in the story of Everard’s killing appeared almost as a footnote. The central, hashtag-generating narratives were not about the police but some nebulous “public” and the generalized “streets” as sites of inherent danger to women’s safety: A woman walks home alone at night, only to be snatched and murdered, her remains dumped in woodlands some 50 miles away.

Following news of Everard’s death, conversations about women’s safety, which orbited around archetypes of pernicious strangers in the dark, obscured crucial aspects of how specific systems of patriarchal power, not some outside “public,” endanger women. This is not primarily a story about darkened streets and strangers — the typical reasoning of women who walk home with keys clenched between their knuckles — but one of likely police violence. And it is crucial that any movement for women’s safety encompass the brutality of the state against women’s lives and structural societal ills of violence against women.

Consider the man who has been charged with kidnapping and murdering Everard, 48-year-old Wayne Couzens: a London Metropolitan Police officer. This is not some mere detail, as if the suspected killer could have been a plumber or a chef and just happened to be a cop; it is not an incidental matter that the accused killer was imbued in daily life with the power to assert control and commit violence on behalf of the state.

Gender-based, patriarchal violence is, of course, profligate beyond law enforcement, but that does not make it amorphous: It operates through specific modes of social organization, through structures of power. Everard’s death prompted, in the way that almost only a young white woman’s brutal murder can, international outrage about ubiquitous threats to women’s safety. The state and the home, perhaps the most notable channels of this violence, were conspicuously absent from much of the “stranger danger” narrative built around Everard’s killing.

Yet many of the women who shared online their own perpetual feelings of fear in public spaces — women like the famous British columnist Caitlin Moran, who described herself as “under a curfew” in concern of going out at night — were, quite evidently, not pointing to their fear of police violence.

“The state is the single biggest threat to women’s health and safety.”

I’m not suggesting that because Everard was likely killed by a police officer, we should only discuss police violence in this instance; neither should cops be our sole focus because they once again proved themselves a threat to public safety at her vigil. But the larger conversation is needed as part of this discussion.

“The state is the single biggest threat to women’s health and safety,” writer Charlotte Shane noted in an important intervention against vague appeals to “women’s fear” that followed Everard’s death. It is the state, she wrote, that “administers violence directly through policing and incarceration and indirectly, through relentless deprivations and oppressions that maintain a regime of interpersonal violence against women, that keep women underpaid and isolated, dependent on male partnership or state surveillance to access resources.” 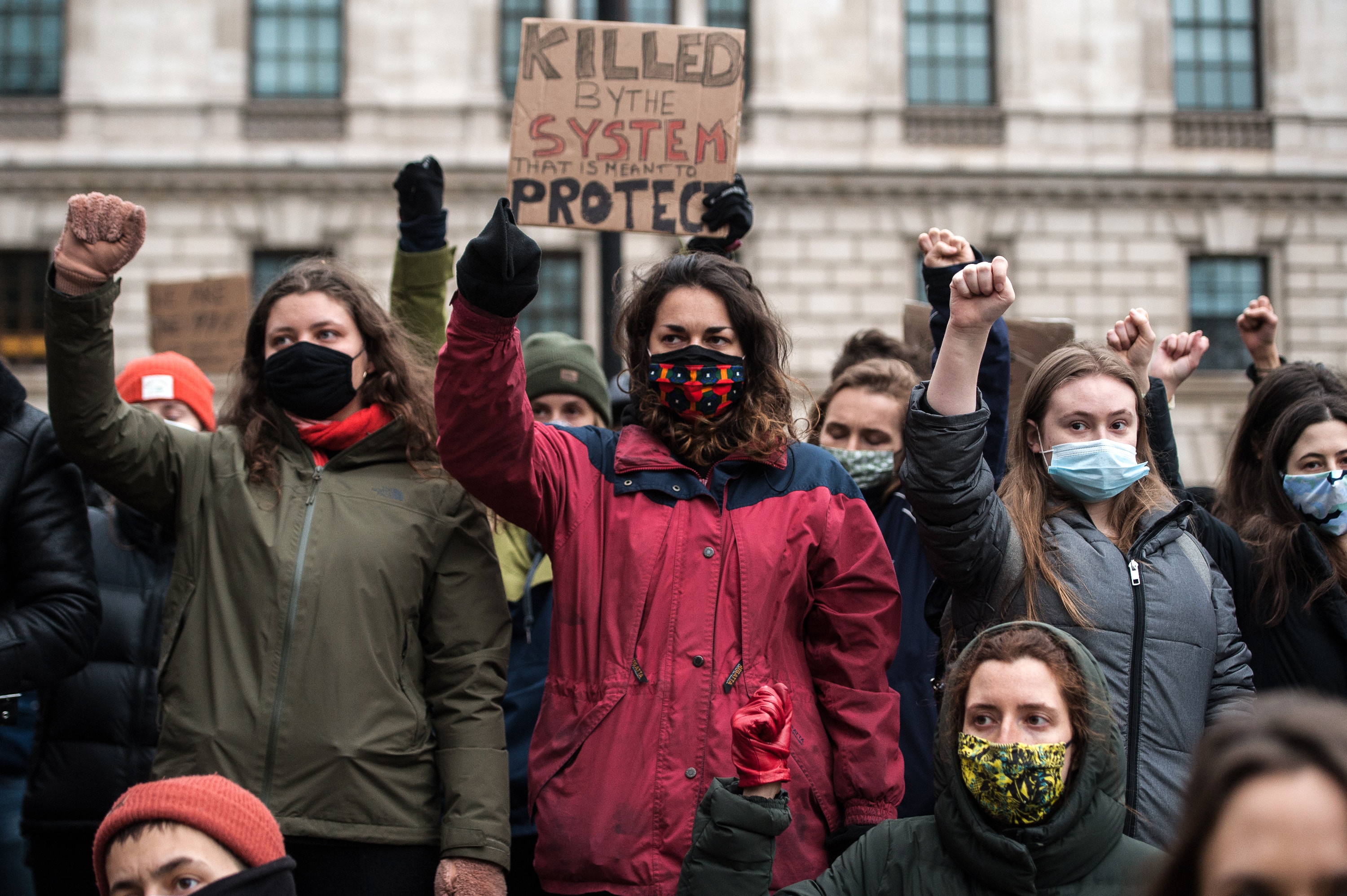 Protesters demonstrate against police brutality in Parliament Square in London on March 14, 2021.

It is well established that gender-based and sexual violence are endemic to law enforcement in both the United States and the United Kingdom, baked into a system of extraordinary power imbalances and impunity.

In 2019, a “super-complaint” was filed against over a dozen British police forces, citing 700 alleged cases of domestic abuse perpetrated by police officers, who faced scant consequences. And despite the difficulties relating to underreporting, two U.S. studies have found that at least 40 percent of police officer families experience domestic violence, in contrast to 10 percent of families in the general population. According to U.K.-based feminist group Sisters Uncut, which helped organize Saturday’s vigil, at least 194 women have been killed by police or in police custody in England and Wales since the 1970s.

Data points like these are why, though Everard’s murder may not be a typical instance of police violence, we should not be shocked that it is a police officer who has been charged with carrying out extreme, gender-based violence. There’s a grim irony in the fact that before Couzens’s arrest, it was his colleagues in the police force who were knocking on doors and warning women to “be careful going out alone” as they investigated Everard’s murder. It will be grimmer still if Everard’s death is used as grounds to endow the police with greater power and resources.

The British “super-complaint” and U.S. studies on police domestic violence point to the other key reason why frameworks of “stranger” violence against women consistently fall short: Attacks by unknown men in public spaces are extremely rare compared to violence committed by a partner or family member.

A woman is murdered every other day in the U.K., with the majority killed by an intimate partner or someone known to the victim. Lockdowns due to the coronavirus pandemic have seen cases of domestic violence skyrocket; in the first month after a lockdown was imposed in the U.K., murders related to domestic abuse tripled compared to the previous year while calls to domestic abuse services jumped by 50 percent. The pattern is global.

Women asserting their right to move freely and without harm in public spaces have played a crucial role in women’s liberation history, but we must reject narratives about patriarchal violence in public that serve to sanctify the primary locus of femicide: the nuclear family and the private home. Sisters Uncut stressed in a tweet that “in a country where 2 women a week are murdered by a partner or ex, home isn’t always the safest place to be.” People shine lights from their cellphones as they gather at a vigil for Sarah Everard at Clapham Common in London on March 13, 2021.

Much of the social media discourse about women’s safety in the wake of Everard’s death has focused on quotidian violations rather than deadly threats. And indeed, the persistent catcalls, verbal threats, and public harassment to which many of us are all too accustomed can have deleterious effects on women’s daily lives; numerous social media posts cited these sorts of misogynist street interactions as grounds for feeling vulnerable. This is understandable: Such harassment reflects the normalized objectification and dehumanization of women. But catcalling is not an inevitable precursor to our facing physical harm, let alone deadly violence, on those same city streets, at the hands of strangers. The likelihood of violence in our intimate lives is far greater; the threat of police violence to the lives of Black and trans women is constant.

The bloody history of white women coding Black men in public as potential purveyors of “stranger danger” should be reason enough for us to tread with extreme care when conversations proliferate about women’s fear in major urban spaces. Street harassment is serious and no doubt a product of the same broad patriarchal context that gives rise to the gravest of gender-based violence, but it can’t be definitive of the threats to women’s safety. As Shane put it, “Specific harm should be the issue, but potential harm and ambient anxiety become the focus.”

Conversations about “women’s safety” too often fail to account for the systems of power and precarity that produce and perpetuate gender-based violence.

Conversations about “women’s safety” in which sentences go unfinished — Safety from what or whom? Safety to do what? — too often fail to account for the systems of power and precarity that produce and perpetuate gender-based violence, let alone the ways it is unevenly distributed along racialized and class-based lines.

Everard’s death catalyzed a mass conversation about “women’s safety”; Breonna Taylor’s death at police hands, a year ago last Saturday, did not. When 21-year-old Blessing Olusegun, a British Black woman, went missing last year, her body was found on a beach and her death ruled “unexplained”; a social media outpouring about women’s safety also did not follow. It is notable who gets to stand for “women.”

It was not until dozens of cops threw young women to the ground at a peaceful vigil that patriarchal violence in policing emerged as focus in the wake of Everard’s murder. Thankfully, a shift toward addressing the specific harms of policing, both racist and gender-based, is underway.

On Sunday, following the spectacular police violence at Everard’s vigil, many thousands of protesters gathered in London’s Parliament Square, anger now rightly focused on the Metropolitan Police and the government to which they report. The demonstration took specific aim at a proposed new bill that would give the police unprecedented powers to disrupt protests but spoke to a broader fury at police violence. Participants joined a “die-in” to name the threat that policing can pose to women’s lives. As Sisters Uncut tweeted, “When thousands of us lay down in Parliament Square this evening, we did so in tribute to the many women who have been killed by police officers, in prison or in state custody.”