Extremist groups joined forces in the weeks after the election to target critical infrastructure and “incite fear,” an NYPD intelligence report said. As the Biden administration turns its attention to an infrastructure system beset with problems, a strange new issue has emerged: conspiracy theorists. That’s according to a detailed intelligence report, produced by the New York Police Department and obtained by The Intercept, which finds that cellphone towers and other critical infrastructure have become an attractive target for conspiracy theorists, especially in the weeks and months following the presidential election.

Conspiracy theorists, joined by far-right white supremacist groups, “increasingly target critical infrastructure to incite fear, disrupt essential services, and cause economic damage with the United States and abroad,” the report states. Blaming “the current contentious domestic political environment,” the document, issued on January 20 by the NYPD Intelligence Bureau and marked as “law enforcement sensitive,” describes a rash of attacks, some of which involved strikingly sophisticated planning. In one case, it says, on December 14, 2020, an individual or individuals broke into a cellphone tower ground station in Fairview, West Virginia, severing the tower’s main power cable and removing the primary and backup generator batteries. The tower had provided wireless coverage throughout West Virginia, Pennsylvania, and Maryland, and the damages totaled over $28,000.

In another instance, an unknown individual is said to have sneaked into a cell tower site in Tennessee on December 19, 2020, by cutting open its perimeter fence. The individual then severed the site’s fiber-optic cables and damaged several other telecommunications components, resulting in a “significant disruption of service for approximately 12 hours.”

A third case describes a neo-Nazi chat group whose “members strongly supported exploiting civil unrest in the United States by attacking the country’s infrastructure.” A member of the chat group, the report adds, wanted to “pursue ‘destruction where the system won’t be able to prepare for it,’ namely through attacks on U.S. bridges, railways and electrical grids.” 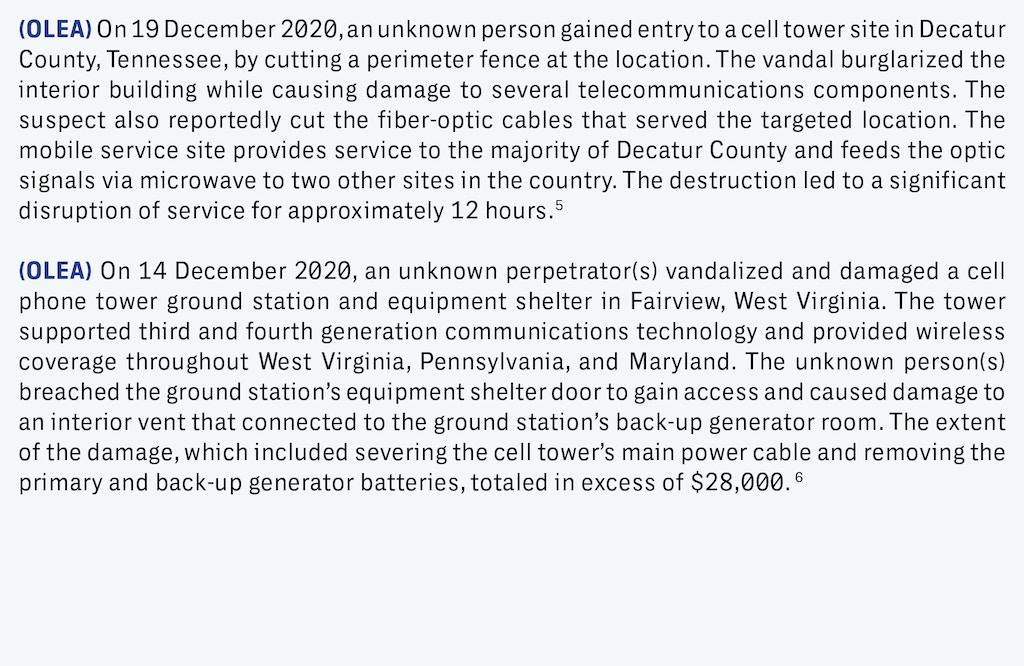 The Intelligence Bureau, which is responsible for gathering intelligence on terrorism and other criminal threats, blames these and similar attacks on individuals motivated by “extremist conspiracy theories aimed at fomenting a general distrust of government” and “racially/ethnically motivated violent extremists.” It stresses the threat of white supremacists to infrastructure in particular: “In recent months, white supremacist extremists, neo-Nazis, far-right Telegram groups, and online conspiracy theorists have all emphasized attacking valuable critical infrastructure targets.” Many far-right groups adhere to the “accelerationist” principle, which maintains that hastening the collapse of society will bring about political change. Targeting critical infrastructure, which impedes the state’s ability to function, is a common insurgency tactic used by militant groups worldwide.

The most detailed case depicted by the report is that of Anthony Quinn Warner, who carried out the bombing in front of an AT&T building in Nashville, Tennessee, on December 25, 2020 — the largest vehicle-borne improvised explosive device attack since the Oklahoma City bombing in 1995. While Warner was not associated with any white supremacist group, the report refers to “initial accounts that Warner was paranoid about 5G cellular networks, an important element which may take on greater significance given the apparent target.”

“Of tactical significance,” the report continues, is the fact that Warner included a prerecorded audio warning that urged passerby to evacuate the area, “indicating a likely intent to cause structural damage rather than mass casualties.”

Similarly, the Department of Homeland Security’s intelligence wing on January 5 and 6 issued three intelligence reports about vandals targeting cell towers in New York, West Virginia, and Tennessee, according to a document obtained by The Intercept. The attacks resulted in disruption of service, including to law enforcement and first responder communications.

While reports about threats to infrastructure security are not uncommon, it was unusual to see three produced in a single week, a federal law enforcement official said, especially on and before January 6, the day of the Capitol riot. The official requested anonymity to avoid professional reprisal. A Department of Homeland Security list of intelligence reports, reproduced by The Intercept.

5G conspiracy theorists believe that the new technology gave rise to the coronavirus pandemic, with many convinced that the electromagnetic waves put out by 5G towers harm the human immune system. As a result, there were reportedly over 30 attacks on cell towers in London in April 2020 alone. Last May, the Department of Homeland Security issued its own intelligence report warning of “calls for violence against telecommunications workers” due to conspiracy theories tying the spread of Covid-19 to 5G technology, according to ABC News.

In December, the Department of Defense issued a threat assessment identifying “Anti-5G conspiracy theories” as a threat, which The Intercept reported on last month. “Individuals motivated by anti-5G conspiracy theories have set fire to dozens of cell phone towers in the United Kingdom, Canada, and New Zealand,” the assessment states. “These individuals are likely motivated by misinformation which claims that 5G networks cause COVID-19, among other claims.”

Other examples of 5G-related attacks have been documented in the local press and by other agencies. For example, a Homeland Security intelligence briefing from May about infrastructure threats obtained through an open records request describes an individual who traveled from Montana to Orinda, California, and entered a restricted area in the Sibley Volcanic Regional Preserve, posing as a critical communications worker with a Covid-19 national emergency letter from the Department of Homeland Security’s Cybersecurity and Infrastructure Security Agency. The report goes on to note that the suspect’s social media revealed content “conspiratorial toward 5-G towers.”