Central American families arrived in Mexico’s Ciudad Juárez disoriented and disconsolate; many didn’t realize they were being expelled from the U.S.

“Bienvenidos a Miami,” the woman in the black jacket mouthed bitterly. Welcome to Miami. An official said this mockingly to her and her fellow passengers, she recalled — all Central American parents with young children — as the U.S. Immigration and Customs Enforcement plane descended. They had departed from Brownsville, Texas, but they knew they weren’t in Miami, she said. Instead of a coastal city, they saw mountainous terrain.

Three hours later, huddled on a dirty, noisy street by a bridge, most still seemed disoriented. Some thought they were in the United States.

“What’s it called here?” a skinny man with a 4-year-old asked me.

“Ciudad Juárez,” I said. “The state of Chihuahua.” Mexico.

Around us, toddlers wailed, older children stared, and mothers quietly wept. The skinny man summed things up: They’d each been “engañado” by the U.S. government. “Deceived,” he said. His verb choice might have seemed strong, but it wasn’t just migrants who were misled. So were Americans just north of the border.

In February, just after Joe Biden took office, Border Patrol agents on the southwest border encountered about 19,000 people traveling in families with children. Of those, 41 percent were immediately returned to Mexico, including to dangerous border cities. They were returned under Title 42, a health law activated in March 2020 by the Trump administration, nominally to help prevent the spread of Covid-19.

The unprecedented application of Title 42 against asylum-seekers was seen by many public health experts and human rights organizations as having nothing to do with public health and everything to do with anti-Latinx racism. Immigrant rights proponents hoped that Biden would immediately retire the policy. He didn’t.

Still, most people traveling in families were initially let in. They were held for a few days by Border Patrol and then often taken to church-affiliated shelters where they could call family members already in the U.S. From there, they went to bus stations and airports, especially in far South Texas cities like McAllen and Brownsville. They got tickets and started their trips into America.

Not surprisingly, word spread in Central America — which has been wracked by hurricanes, in addition to coping with poverty and violence — that parents with children could turn themselves in to officials at the U.S. border and have a decent chance of acceptance into the asylum process. More families started coming.

In March, the Biden administration started to backpedal. Border Patrol stations were too crowded with families, the government said. Shelters in South Texas were overwhelmed. On March 8, an overflow plan was announced: Beginning that day, families seeking asylum would be flown west to El Paso, where they would be taken in by Annunciation House, a venerable Catholic organization with multiple shelters that has long offered respite to refugees. The group issued a call for El Pasoans to volunteer at “A-House,” as the shelter network is affectionately known. The city felt proud that it could do its humanitarian bit for the people doing what they have a right to do under international law: seek asylum.

Meanwhile, the new head of the Department of Homeland Security, Alejandro Mayorkas, repeatedly announced to would-be migrants that they should stay away. “The border is closed,” he said.

I got vaccinated and by late February was primed for a more normal life. For me, “normal” means once again visiting El Paso’s sister city in Mexico, Ciudad Juárez. On March 15, I walked south across the international bridge to take a stroll downtown. I went to haunts I hadn’t visited since before the pandemic: the sing-song outdoor fruit market, the cheese vendor who slices tasting samples, the plaza where two old men in zoot suits dance to a boom box blaring Pérez Prado. It was a glorious day until I walked back over the bridge. There I saw two Border Patrol agents herding dozens of young adults stumbling disconsolately toward Mexico, toddlers clunking from their chests.

Over the next few days, journalists started reporting that some families flying from Brownsville to El Paso were subsequently being expelled. But, they said, Annunciation House had also received families from the airplanes. On March 16, I went to a remote part of the airport and peered through holes in a burlap-covered fence to watch a plane land. A Reuters photographer was there, and we saw mothers and tiny children disembark before the cops shooed us away. The photographer then went to Juárez. Two hours later, he saw the same families. 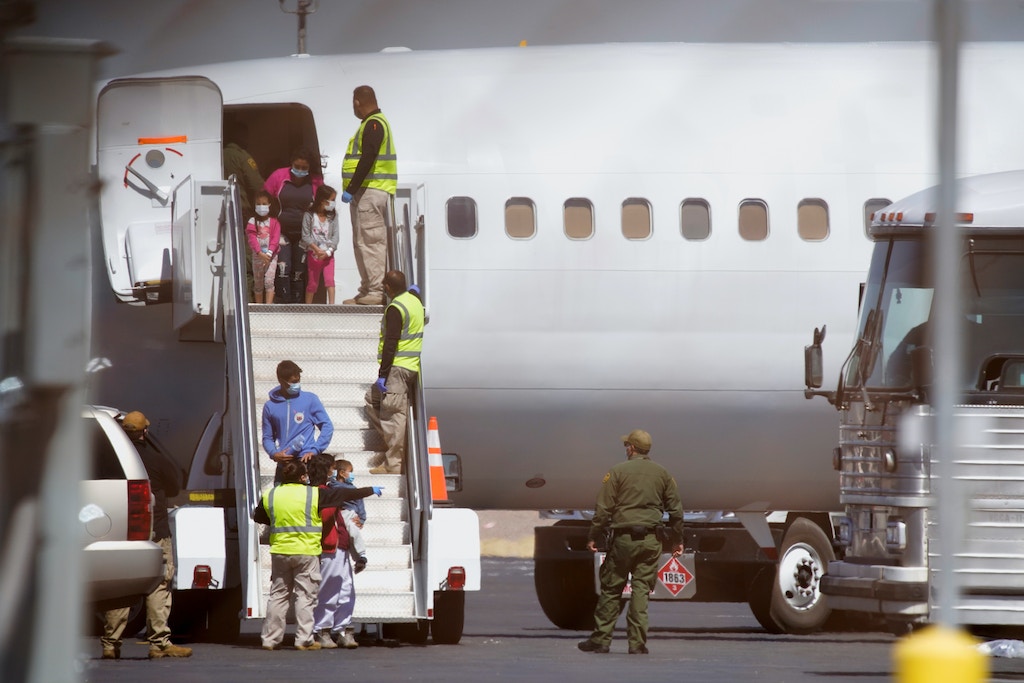 Migrants arrive in El Paso, Texas, on a chartered flight from Brownsville on March 17, 2021.

Local and national press visited Juárez, but the media continued to report that a fraction of families — no one said how many — were still being processed into the United States.

On Sunday, I learned a plane was coming in from Brownsville at noon, so two hours later, I again walked south on the bridge. That’s when I saw the weeping people who’d been told they were landing in Miami.

A group of Mexican government workers usually comes to offer the families help. They provide information about shelters, though Mexican officials have told the press that capacity has been overwhelmed and a gymnasium is being refurbished to make more space.

The woman in the black jacket, as well as others who’d been on the plane, told me they feared Mexican shelters because they might be funnels for deportation back to Central America. The streets are dangerous, the government officials warned. She said she had no idea how to get off of the street. I asked them how many families were still being processed in El Paso. They said they had no idea.

“No one,” said some of the expelled people. We didn’t see anyone chosen to stay in El Paso. We all got sent over the bridge.

Back in El Paso, I asked around. I heard from an activist that when the flights first started coming from Brownsville, some passengers were immediately removed to Juárez, while some were released to Annunciation House. But lately, I was told, every single family was immediately being expelled.

I asked the Border Patrol to confirm this, and El Paso Sector Chief Gloria Chavez responded by email. “Our priority is to process them and expel them into Mexico under Title 42,” she wrote of the families being sent to El Paso from the South Texas Rio Grande Valley region. While the agency had been working with local officials and NGOs to house families in El Paso, she explained, as of a little over a week ago, “the government of Mexico has been able to receive all family units from RGV under Title 42. Therefore, limiting the amount of individuals released to Annunciation House.”

El Paso’s respite facilities have their beds, yet asylum-seekers are being sent back to Mexico. Across the bridge, meanwhile, the good people of El Paso — the local officials and volunteers ready to welcome the families — can do nothing to help.