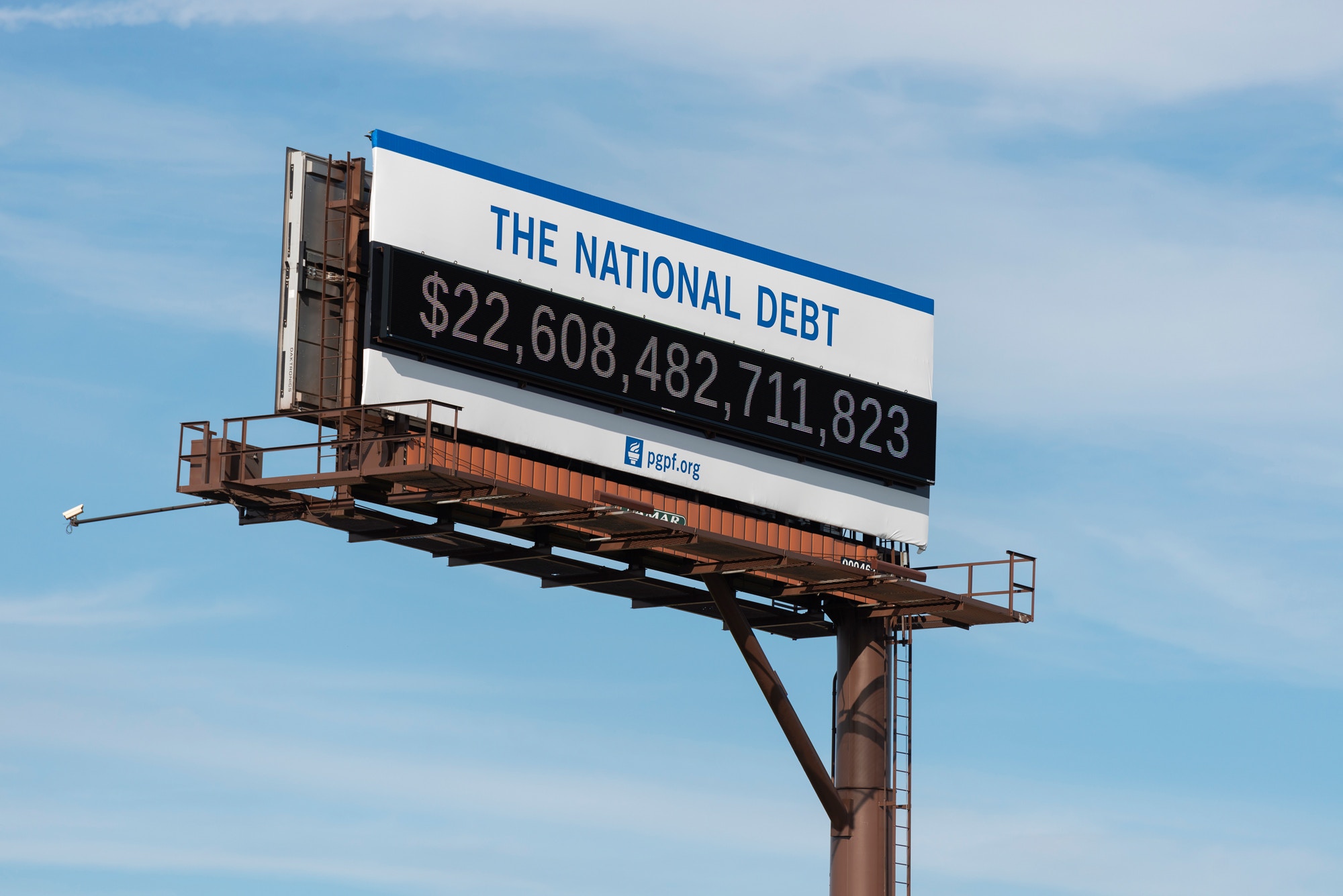 A billboard showing the national debt and each American’s share is displayed on Sept. 24, 2019, in downtown Cleveland.

For decades, the Washington, D.C., political class has condemned deficit spending as an act of selfishness. We’re profligately throwing ourselves a party, they say, but paying for it with our credit cards, leaving our descendants to pick up the tab.

This rhetoric subsided during the Trump administration. But with a Democrat in the White House who’s proposing significant new spending, it’s returned with a vengeance. “We should use every tool we have to stop bankrupting our kids and grandkids,” Sen. Ted Cruz, R-Texas, recently declared. Republican Sen. Marsha Blackburn of Tennessee has decried the coming “debt burden on our children and grandchildren”:

What has Biden achieved in his first 100 days?

Trillions in government spending funded by a tax hike and a debt burden on our children and grandchildren. #JointAddress pic.twitter.com/j2oqglI9yL

In USA Today you can find Wisconsin GOP Sen. Ron Johnson warning about “the debt burden we are placing on our children.” Independent Sen. Angus King of Maine — he caucuses with the Democrats — is anxious about “increasing the national debt we will leave to our children and grandchildren.”

And this goes far beyond politicians: It’s soaked into American culture. The AARP Bulletin once featured two newborns on its cover with a headline declaring them to be “$156,000 in debt.” An article in the Christian Post instructs us that “we used to take pride in paying our own way. Now we have no problem sponging off anyone, including our grandchildren.”

This sounds awful, until you think about it for five seconds. Instead of panicking about the blighted future we’re leaving to our progeny, ask whom our children are going to have to repay.

The answer is … our children.

Every time the federal government sells a bond, it creates a liability for the government. But it also creates an asset for those who bought the bond, in exactly the same amount. For American society overall, the entire process is, financially speaking, largely a wash. (For details on why it’s not completely a wash, see below.)

It is true that this could create problems with inequality. Government bonds, like financial assets in general, are disproportionately owned by the wealthy.

To understand what this means in concrete terms, consider Blackburn, and all of her anxious statements about the danger of government debt. Blackburn’s financial disclosure report states that she and her husband have hundreds of thousands of dollars invested in various mutual funds. Most mutual funds invest to various degrees in U.S. government bonds.

While Blackburn frets in public about “a debt burden on our children and grandchildren,” her children will likely be benefiting from this debt burden.

Blackburn has a son and daughter. And if they inherit these mutual funds, part of that inheritance will almost certainly be indirect ownership of government bonds. In other words, while she frets in public about “a debt burden on our children and grandchildren,” her children will likely be benefiting from this debt burden. In the future, money will flow from the U.S.’s children in general to her kids specifically.

Of course, it doesn’t have the same ring to it to say, “I’m desperately worried that deficit spending today will force everyone else’s kids to pay my kids in the future.” This would raise the question of why, if future Americans see this as a problem, they won’t be able to just raise taxes on Blackburn’s children. The answer, of course, is that they will be able to do that if they want — thereby extinguishing most issues regarding deficit spending in the present.

There is somewhat more to it, though not a lot. Not all government bonds are purchased by Americans. Right now about one-third of U.S. government debt is held by foreigners. The Treasury Department updates who has how much every month; right now Japan and China both have a little over $1 trillion in U.S. treasury securities.

The U.S. has been running a trade deficit since the 1980s.

For complex and confusing reasons, however, this is almost certainly a good thing.

The U.S. has been running a trade deficit since the 1980s. That is, we’re buying more from other countries than we’re selling to them. In order to finance the difference, we have to give foreigners American assets. These assets can be anything: cash, or government bonds, or stock in American companies. At the same time, the U.S. has also been accumulating foreign assets.

Foreigners now own $46.25 trillion in such U.S. assets, while the U.S. owns $32.16 trillion in foreign assets. The gap between these two amounts, $14.09 trillion, is essentially the accumulated difference between what we’ve bought and what we’ve sold.

On its face, this would seem to be a significant problem for the U.S., inexorably leading to large outflows of money to other countries. Strangely, though, this is not happening. Investments in stock generally earn higher returns than investments in bonds, particularly government bonds. And the U.S. assets are disproportionately in foreign stock, while foreigners invest more in U.S. bonds.

Because of this, the U.S.’s smaller amount of foreign assets consistently earns a greater return than the larger amount of U.S. assets held by foreigners. Thus rather than money flowing out of the U.S., it’s still flowing into the country. More detail about this strange state of affairs can be found in a recent report from the Brookings Institution.

The upshot is that, if anything, we should want foreigners to be investing more in low-yielding U.S. government bonds, because this means that they’re not buying higher-yielding American stocks.

So Cruz, Blackburn, Johnson, King, and the rest of the huge anti-deficit spending army can stand down. Government debt simply is not a terrifying boogeyman for our descendants to fear, or even much of a problem at all. If our grandchildren end up hating us, it’s much more likely to be because we failed to give them excellent educations, or create a functioning health care system, or prevent global warming from destroying a livable biosphere. Those will be true burdens on them, ones that we can prevent by wisely spending lots of money today.