Kelly is in the minority of Senate Democrats who have sponsored neither the sweeping labor reform legislation nor a crackdown on forced arbitration. 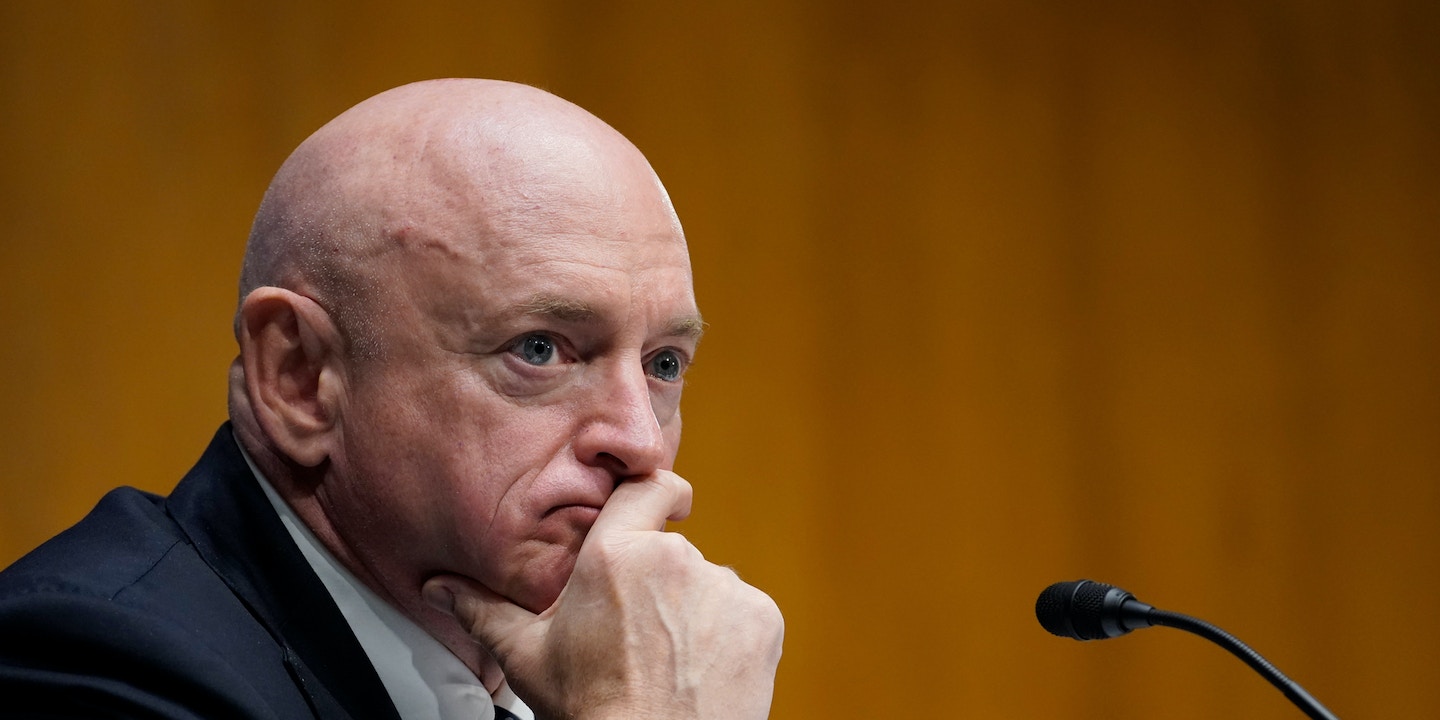 Before being elected to the Senate, Mark Kelly, one of just three Democrats yet to co-sponsor the PRO Act, the party’s sweeping labor reform legislation, enjoyed a nearly five-year paid seat on the board of the restaurant franchise company Landry’s, which owns eateries like Morton’s The Steakhouse and Bubba Gump Shrimp Co.

Kelly served on the Landry’s board from February 2013 to August 2017 and disclosed compensation of more than $5,000. There are no public records indicating exactly how much he was paid, but Securities and Exchange Commission filings show that in 2009, the last year Landry’s filed SEC disclosures, board members had been paid $120,000 annually in stock and cash, which would put Kelly’s total compensation north of $500,000 for the part-time work. (Records from Kelly’s tenure are not available because the company was taken private in 2010, before he joined the board.)

In 2015, in the midst of Kelly’s board service, Landry’s rolled out a forced arbitration agreement to its workforce, requiring them to sign away the ability to unite as a class in a lawsuit and agree to have any disputes handled by arbitration. This sort of agreement would be illegal under the PRO Act, which seeks to prohibit contracts that waive employee class-action rights.

Landry’s is run by Kelly’s longtime, close friend: celebrity billionaire Tilman Fertitta. Author of the 2019 book “Shut Up and Listen!: Hard Business Truths That Will Help You Succeed,” Fertitta is a regular presence on CNBC and star of the network’s reality TV show “Billion Dollar Buyer.” He has also been a particularly outspoken opponent to the $15 dollar minimum wage and to the wealth tax proposed by Sen. Elizabeth Warren, D-Mass.

Kelly did double duty with Fertitta, also serving from May 2016 to November 2018 on the board of a firm the latter founded called Landcadia Holdings LLC, according to Kelly’s financial disclosure. Landcadia is organized as what’s known as a SPAC, or a “special purpose acquisition company.” Otherwise called “blank check” companies, the firms look to take over businesses they can flip, liquidate, or run more efficiently at a higher profit.

In November 2018, the same month Kelly exited, Landcadia Holdings announced it had completed an acquisition of a food delivery gig company called Waitr Incorporated. The companies combined and went public on the NASDAQ exchange under the banner Waitr Holdings. After opening around $10 per share, its stock value plummeted to just 28 cents a year after the acquisition, and the company was hit with a class-action suit from wiped-out investors who say Fertitta misled them. In February 2019, delivery drivers sued Waitr as well, alleging that they had earned sub-minimum wages; the company offered to settle in August 2020 by dividing up to 1.5 million shares, instead of cash payments, among the drivers.

Before its acquisition by Landcadia, Waitr treated many of its drivers as hourly employees. But since forming the combined company, it has laid off employee drivers or converted them to independent contractors, an approach that illustrates the fight over classification at the heart of the PRO Act. Gig companies have been the most aggressively hostile to the legislation, spending more than $1 million lobbying just in the first three months of this year.

“Senator Kelly continues to evaluate the legislation and speak with Arizonans about it, and as always, he will make a decision based on what is best for Arizona,” said Jacob Peters, a spokesperson for Kelly.

Another leading industry opponent is the National Restaurant Association, of which Landry’s is a member. When the PRO Act was introduced in February, the association met it with a blistering statement, warning of “chaos” under “radical changes to settled workplace policies.” The group also leads the effort against raising the minimum wage to $15.

Kelly voted with 41 other Democrats and independents in March to raise the federal minimum wage to $15 an hour, a measure that failed. He is not among the 38 co-sponsors of the Raise the Wage Act, which would gradually increase the wage to $15 by the year 2025 and index it to median wages thereafter.

Amid the minimum wage fight, the right-wing outlet the Washington Free Beacon reported on Kelly’s ties to Landry’s, noting the company had fought such an increase. Peters told the outlet at the time that Kelly “had no role in business decisions, including the one you reference.” (Board directors generally have significant responsibility for oversight of a company.)

Landry’s also owns Mastro’s Steakhouse, McCormick & Schmick’s, Rainforest Cafe, and Oceanaire, among its 500-plus locations. The company made news in 2017 for a passive aggressive political statement appended to its receipts in Washington, D.C., restaurants after the city hiked the minimum wage. “Due to the rising costs of doing business in this location, including costs associated with higher minimum wage rates, a 3% surcharge has been added to your total bill,” the note read.

The following year, a server at a Washington, D.C., restaurant sued for wage theft, and Landry’s attempted to have it thrown out due to the arbitration agreement. But the company couldn’t find the paperwork the server had allegedly signed, so the courts let the suit go forward. The case surfaced internal documents in which restaurant managers were told to explain to staff that the arbitration agreements were in everybody’s best interests because class-action suits are “about enriching lawyers” and that arbitration is an efficient way to resolve workplace disputes.

The arbitration agreement covered disputes over “wages, overtime, premiums, gratuities, tips, service/administrative charges, or any other compensation due,” according to court documents.

Beyond Landry’s and Landcadia, Kelly had a busy board life before his election to the Senate. He served on the safety advisory board of Elon Musk’s SpaceX from 2012 to 2019, where he was paid as a consultant. (His disclosure only reveals it was an amount greater than $5,000.) His 2020 filing listed a total income of $1.5 million to his consulting firm.

Kelly also reported earning $50,000 in board compensation from the investment firm Vistria Group, with holdings in home health care companies, pharmaceuticals, financial service companies, and for-profit educational firms. Home health care companies in particular have been on the leading edge of the fight against raising the minimum wage and are often locked in confrontation with unions attempting to organize workers.

Fertitta, for his part, is an active and major political campaign donor, spending over $600,000 in the 2019-2020 cycle, which included $35,000 to the “Trump Victory” fund and more than $100,000 to committees supporting Republican Sen. John Cornyn’s effort to hold on to the majority. But he also gave the individual maximum contribution to Kelly, along with $10,000 to the Arizona Democratic Party.

In addition to the PRO Act and the Raise the Wage Act, the Senate is also considering the Forced Arbitration Injustice Repeal Act, or FAIR Act, which would ban forced arbitration. It was introduced in March with 40 co-sponsors. Kelly is not among them.