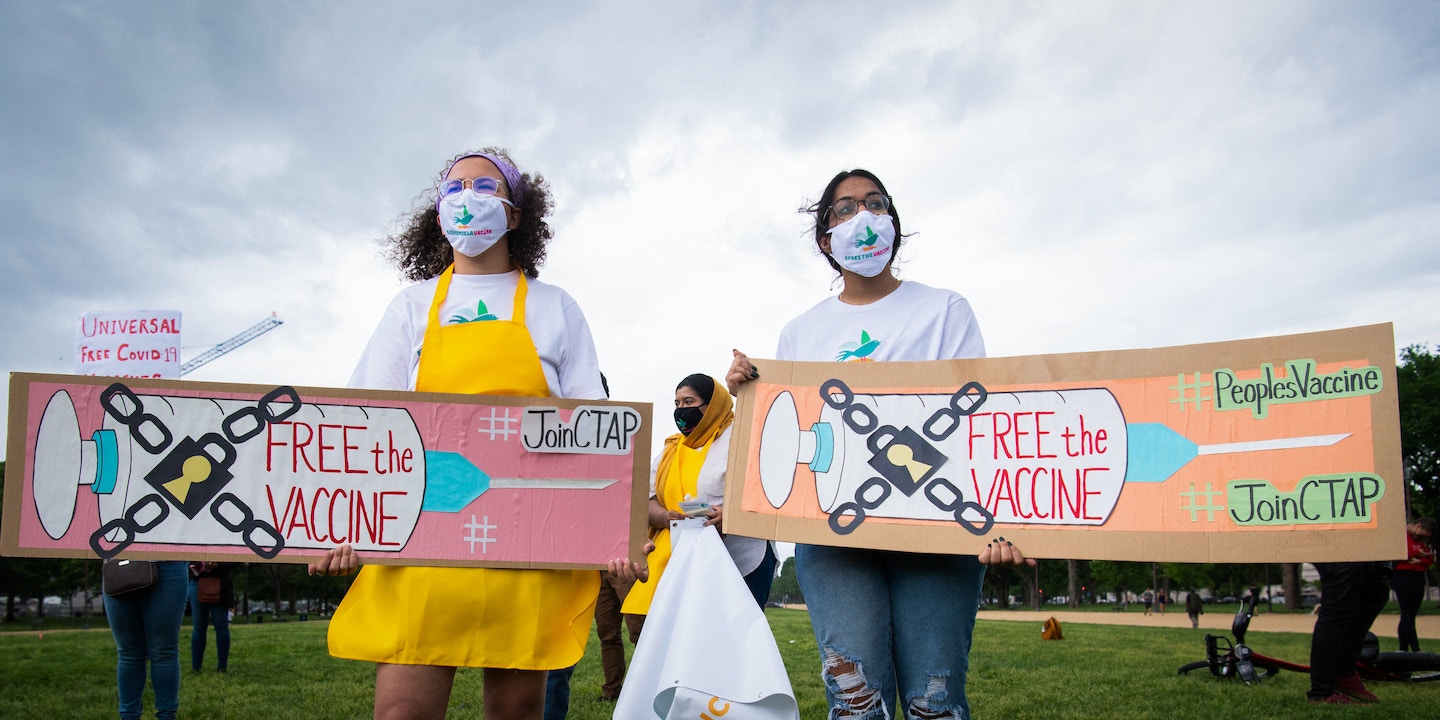 Just before going live on Al Jazeera last week, Achal Prabhala, an activist for equitable access to medicine, performed a quick internet search on his sparring partner in a debate on the proposal to share vaccine technology with low-income countries.

It didn’t take long before Prabhala found that his opponent, an academic who favors pharmaceutical monopoly rights, leads an institute at Duke University funded by Pfizer and AstraZeneca. He pointed this fact out to the producers on air.

The apparent conflict of interest is hardly a rare occurrence.

Across newspapers, online outlets, and broadcast media, prominent experts and organizations backed by the pharmaceutical industry are weighing in against the global push to temporarily waive enforcement of certain patent and intellectual property rights on vaccines and other pandemic-fighting technologies, a proposal designed to allow the creation of generic coronavirus vaccines and therapeutic medicine to meet global demand. Despite their relevance for many opponents of the waiver, financial ties to the drug lobby are rarely disclosed.

The Biden administration’s announcement earlier this month that it would back the waiver at the World Trade Organization has escalated the fight.

Dr. Krishna Udayakumar, the pundit Prabhala faced on Al Jazeera, leads the drug industry-backed Duke Global Health Innovation Center and appears frequently in major media outlets to discuss vaccine issues without any mention of his drugmaker ties. He did not respond to The Intercept’s request for comment. Ayoade Alakija, left, Krishna Udayakumar, center, and Achal Prabhala, right, speak on an Al Jazeera “The Stream” segment titled, “What will it take for rich nations to stop hoarding COVID vaccines?” on May 11, 2021.

“The doctors in the media come with this scientific imprimatur, who come with good hearts and a lofty sense, but it’s completely absurd,” said Prabhala, the coordinator of the AccessIBSA project, which campaigns for access to medicines. “They say the waiver doesn’t matter, that it will make no difference, they are so sure despite the fact they have no experience in large-scale vaccine manufacturing.”

Prabhala noted that technology transfer could allow factories in the developing world to quickly scale up production of more vaccines. One major problem, he added, is that companies need to share vaccine formulas with firms willing to step up to radically increase supply.

Another potential conflict Prabhala noted is that of Dr. Ashish Jha, a prominent physician and dean of Brown University’s School of Public Health, who appeared on a New York Times podcast to dismiss the waiver. Jha, who did not respond to a request for comment, also works as an adviser to the Albright Stonebridge Group, a consulting firm that helps drugmakers with international patent issues. Disclosures obtained by The Intercept show that the firm recently counted Pfizer as a client.

“Academics should disclose conflicts in their Twitter bios,” tweeted Amy Kapczynski, a Yale Law School professor, pointing to Jha’s dual roles. In a response to the social media controversy, Jha wrote on Twitter that he was an unpaid volunteer for the consulting firm.

But the conflicts span a variety of voices with credibility to viewers, from think tank economists and former lawmakers to Christian conservatives and minority advocacy organizations.

Ron Klink, a former Democratic congressman from Pennsylvania, responded sharply to President Joe Biden’s support of the temporary waiver. “Anyone who supports such a silly notion is dangerously wrong on the facts. Intellectual property rights are not getting in the way of global vaccination,” Klink wrote in the Pittsburgh Post-Gazette.

The newspaper identified him as a “senior policy adviser” to a law firm and former legislator, leaving out Klink’s status as a registered patent lobbyist for the Pharmaceutical Researchers and Manufacturers of America, the trade group that represents Johnson & Johnson, Pfizer, and AstraZeneca.

The group, known as PhRMA, has distributed talking points to consultants to vigorously push back against the waiver request. PhRMA’s tax return shows that the group provides funding to a dizzying array of advocacy organizations, many of which are now stepping up against the waiver.

Several groups devoted to increasing the visibility of minority voices, including the Latino Coalition and the National LGBT Chamber of Commerce, signed onto a letter claiming that “the waiver would undermine the global response to COVID-19 and would not achieve its stated goal to rapidly expand vaccines production.” The LGBT Chamber lists Pfizer and PhRMA as corporate sponsors, and the Latino Coalition receives support from several drug companies.

Eagle Forum, the Christian conservative pressure group founded by the late Phyllis Schlafly, similarly tried to shape the debate, charging that the waiver request represents an effort by India and South Africa to use the “COVID-19 pandemic as a pretext to raid intellectual property through the World Trade Organization.”

The Missouri-based organization, which is generally known for its opposition to LGBTQ rights, abortion access, and gun control, echoed the drug lobby’s arguments in a series of publications. The group has received at least $90,000 in contributions from PhRMA over the last six years.

The Small Business and Entrepreneurship Council, a nonprofit purportedly devoted to helping small businesses, has loudly protested the waiver, despite the fact that it would largely impact a small number of transnational mega-pharmaceutical companies.

“One has to wonder, therefore, why these calls for rolling back intellectual property protections are even being made. Is it more about advancing a political agenda? Government undermining property rights will not magically translate into others quickly ramping up production,” said Raymond Keating, the chief economist of the SBE Council, in a statement. The group, notably, is also a recipient of funds from PhRMA.

One of the most-cited voices in the debate is the Information Technology and Innovation Foundation, or ITIF. The group, which is funded by Pfizer, Merck, and the two largest lobbying groups for vaccine makers — the Biotechnology Innovation Organization and PhRMA — has blasted the waiver in a series of press statements and reports, though its affiliation with the drug lobby is rarely noted.

The Washington Post, for instance, cited the group to note that some believed “endorsing this waiver petition succumbs to the fundamental fallacy that IP rights represent any kind of significant barrier to access and manufacturing of the medicines needed to overcome this crisis.” ITIF experts have been published or cited in anti-waiver pieces published by the Post and Courier, Business Day, and the Epoch Times, among other outlets.

In some cases, media outlets have gone back to clarify conflicts. Scott Gottlieb, the former head of the Food and Drug Administration under President Donald Trump, has appeared in the media several times in recent weeks to argue against issuing the patent waiver. In some cases he has been clearly identified as a Pfizer board member — a position that awards over $380,000 in annual compensation — and in other cases, he has not.

Axios, after publishing his comments opposing the waiver, updated its story to note Gottlieb’s board position.

Last week, The Intercept published internal talking points distributed by PhRMA to its consultants working to drum up opposition to the waiver. The group has advised lawmakers and others to argue that the waiver is not necessary, that sharing vaccine technology would embolden China, and that any loss of pharmaceutical monopoly power over patents and IP could cost crucial American jobs.

But the drug lobby rarely shows its hand publicly, frustrating activists and others seeking more equitable access to vaccines.

When they appear as industry-backed pundits, “doctors argue, ‘Vaccines are complex.’ It’s said with people with a straight face like it’s something profound. OK, so are croissants,” said Prabhala. “I would prefer to debate actual pharmaceutical representatives so I know who I am talking to and the audience actually knows who they are listening to.”