A Palestinian member of Israel’s Knesset writes that dispossession, discrimination, and occupation cannot be swept under the rug. Israeli Prime Minister Benjamin Netanyahu speaks during a meeting with Israeli border police in the central city of Lod, near Tel Aviv, on May 13, 2021.

Several mixed towns in Israel looked like war zones over the past two weeks. In these communities, such as my hometown, Akka, Jewish Israelis and Palestinians like me live near each other. Recently, small numbers of young Palestinians, enraged by Israeli provocations at Al-Aqsa Mosque and plans to evict Palestinian families from their Sheikh Jarrah homes, clashed with police and attacked local businesses. Hundreds of other Palestinians, myself included, attempted to calm the situation down.

The clashes were part of a much larger picture: Thousands took to the streets protesting against Israeli aggression, but the violence was what captured international — and Israeli — attention.

In the days that followed, as Israel began bombing the besieged Gaza Strip, extreme right-wing Jews called on their supporters to come armed to mixed towns. Unlike the spontaneous outbursts of Palestinian rage, these fascist thugs came with a clear political agenda, organized lynch mobs, and assaulted Palestinian civilians. They were emboldened by Prime Minister Benjamin Netanyahu’s brazen assault on civil liberties and human rights, as well as his wanton racist incitement against Palestinians.

Netanyahu ignited this latest round of violence with deliberate provocations in Jerusalem — at the height of Ramadan — in what can only be seen as a bid to remain in power. Israel has been stuck in a political gridlock and, after several elections, Netanyahu had been unsuccessful at forming a government during a monthlong mandate, which expired May 4. His rivals among the Jewish parties were in the process of trying to put a coalition together.

Sadly, though not atypically, when Israel began shelling Gaza, many in the purported opposition to Netanyahu actively supported the campaign. Netanyahu’s cynical ploy to hold on to power might prove politically successful, but Jewish and Palestinian civilians are paying the price.

Bleak as the current situation might seem, we simply don’t have the luxury of giving in to cynicism and despair.

It is incumbent upon us all to do everything within our power to prevent intercommunal violence from rearing its ugly head again. Overcoming the dark forces of bigotry and hatred that Netanyahu and his extremist allies have deliberately unleashed will be a daunting task, but I do not accept that things cannot be different. Bleak as the current situation might seem, we simply don’t have the luxury of giving in to cynicism and despair. Instead, we must examine how we got here and where we need to go.

In light of the unprecedented wave of intercommunal violence, many have in recent days bemoaned the loss of Jewish-Arab coexistence in Israel’s mixed towns, urging a return to the “status quo.” Yet we should remember that the status quo in places like Yaffa and Lydd — towns whose majority Palestinian population were made refugees in 1948, forming a large portion of Gaza’s population today — includes settler-backed organizations “Judaizing” neighborhoods. The remaining Arab populations in these towns suffer from deliberate abandonment, crumbling infrastructure, and poverty.

There cannot be true coexistence under the nation-state law, which codifies a racist doctrine of “separate and unequal,” and as long as Palestinian citizens of Israel — a fifth of the country’s citizenry — are treated as second-class citizens, their very existences threatened by forced expulsions, police violence, and discriminatory legislation. 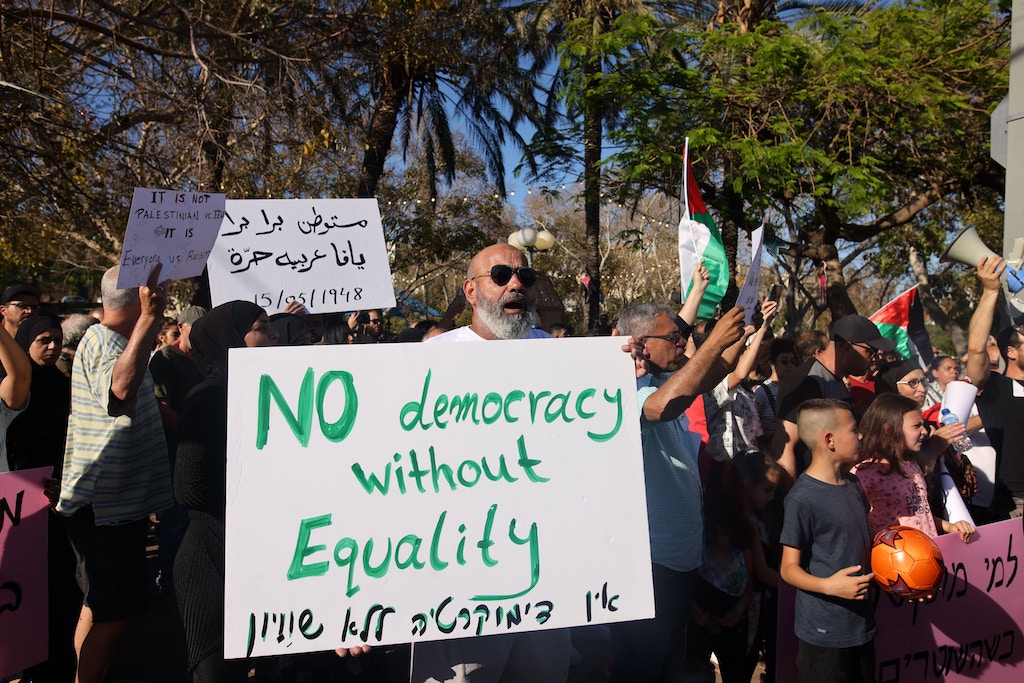 Palestinian and Israeli residents of the coastal city of Yaffa, near Tel Aviv, raise placards as they take part in a rally on May 15, 2021.

As a recent report by Human Rights Watch meticulously documents, aiming to maintain “Jewish Israeli control over demographics, political power, and land,” Israel has systematically — on both sides of the Green Line that demarcates the occupied Palestinian territories — “dispossessed, confined, forcibly separated, and subjugated Palestinians.” It is an attempt to curb the so-called demographic threat that the very existence of Palestinians poses to Jewish supremacy.

We cannot ignore Israel’s state-sanctioned violence and hypocritically condemn violent Palestinian resistance to occupation, segregation, and discrimination. No one should act surprised that people whose voices are systematically silenced — whose mass protests are met with silence from the international community and brutal repression by Israel — resort to violence in their desperation. As Rep. Ayanna Pressley, D-Mass., said on the floor of the U.S. House of Representatives, “Palestinians are being told the same thing as Black folks in America — there is no acceptable form of resistance.”

Consider the unrecognized Bedouin village of Al-Araqib, inside Israel. Amid attempts to expropriate their lands, the villagers’ homes were destroyed — razed, and rebuilt, 186 times. When the people protested, they were beaten and jailed by a militarized police force, sent to terrorize an Indigenous community into submission. When Sheikh Jarrah residents protested against the ethnic cleansing of their neighborhood, they were met with tear gas, water cannons, and rubber bullets. When Gazans protested by marching toward the barrier that holds them in an open-air prison, Israeli forces shot and killed 214 demonstrators.

As Sen. Bernie Sanders, I-Vt., recently asked: “[W]hy do we seem to take notice of the violence in Israel and Palestine only when rockets are falling on Israel?”

Equality Is the Answer

As Israel continues its brutal bombardment of Gaza, with clashes raging in the occupied Palestinian territories and Israel alike, the atrocious violence of the past two weeks reminds us of the tragic price civilians pay. There is a festering frustration over decades of humiliation and discrimination that boils over and ignites both our communities — to everyone’s detriment.

These events are a sobering wake-up call for anyone working under the delusion that the Palestinians’ decadeslong dispossession can be comfortably ignored and “managed,” that a colonial occupation can be swept under the rug, and that international efforts like the “Abraham Accords” with Gulf petro-monarchies that don’t address Palestinians’ grievances will bring about peace.

The violence of these past weeks should serve as a stark warning that things cannot go on as they have.

We have also learned that Palestinian citizens of Israel will not silently stand by as the occupation deepens, the siege of Gaza continues unabated, and Palestinians on both sides of the Green Line are displaced, only to be replaced by Jews.

Above all, the violence of these past weeks should serve as a stark warning that things cannot go on as they have.

We must do everything possible to secure a ceasefire and bring security to our communities. Yet we must not return to the status quo, for a return to so-called normalcy means normalizing occupation, siege, and segregation. It will only serve as a Band-Aid on a deep wound that is bound to, sooner or later, reopen again with yet more bloodshed.

For far too long, the world has turned a blind eye to Israel’s crimes against the Palestinian people. To prevent continued bloodshed, the international community must act decisively to end Israeli impunity, ensure Israel meets its obligations under international law, and respects the human rights of all people, irrespective of their nationality or religion. A true democracy will only be achieved when Jewish supremacy is replaced with full equality for all of us.

Today, as we mourn the unimaginable loss of civilian lives, it is a moral imperative and a political necessity to hold Israel to account, end the occupation, and establish an independent Palestinian state alongside Israel on the 1967 borders. We must continue to work shoulder to shoulder — Jews and Arabs alike — to build the just and equal society we all deserve. There is no other choice.