After a ceasefire on Thursday, Palestinians took stock of damage wrought by airstrikes that left doctors dead and at least 19 health care facilities destroyed. 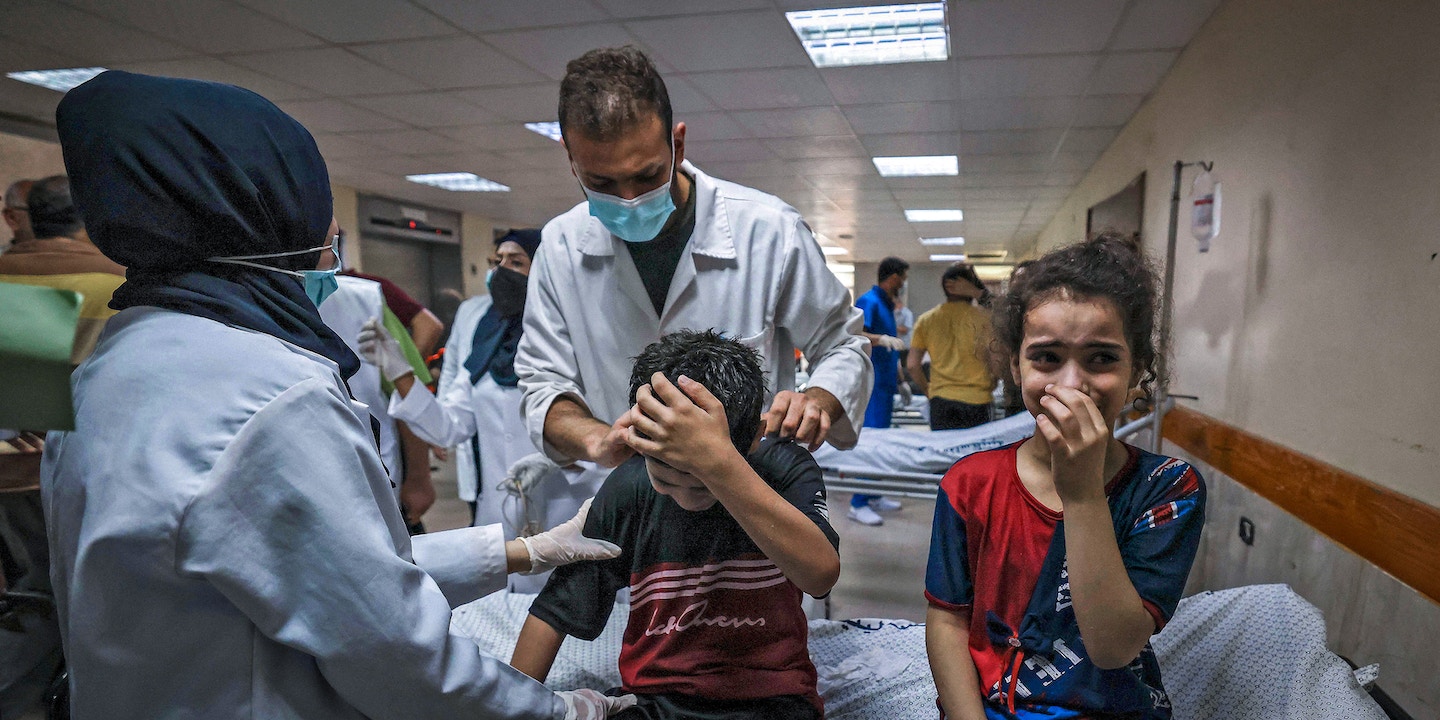 “We are already working within extreme limitations and now we face dozens of victims at a time,” he told The Intercept. “We try our best to triage the cases, but there are so many wounded. The end result is a lot of deaths and an unbearable load on the medical staff.” Harazeen added, “We are shattered.”

Leading up to the ceasefire announced on Thursday evening, the medical professionals of Gaza’s main hospital had worked around the clock for more than a week to treat the soaring number of war injuries inflicted by Israeli airstrikes — nearly 2,000 in only 10 days. Medical workers and their facilities have not been exempt from the attacks: Israeli airstrikes have killed doctors and damaged at least 19 health clinics, drawing increasing international outcry and condemnation.

The swelling number of patients, casualties among medical staff, and attacks on infrastructure surrounding medical facilities all compounded a longstanding crisis in the Gaza Strip, which has been besieged by Israel for a decade a half.

“The war injuries are the most brutal additional burden on a health care infrastructure that was already on its knees because of the occupation’s systematic ‘de-development’ of Gaza’s health care sector,” said Dr. Osama Tanous, a Palestinian pediatrician with Physicians for Human Rights–Israel. “Gaza’s doctors and staff are absolutely inspiring, hardworking professionals, but they’re working in an intentionally broken system by the occupation, always pushed to its most extreme limits.”

Harazeen said he and his colleagues have only slept “a few hours here and there” during the hostilities because “the need is nonstop.” The few times he had reached his home through the Israeli shelling, he was physically and emotionally exhausted, “barely able to open my eyes or have a good chat with my family.”

He and his colleagues are “haunted by the sound of screaming children and all the shredded bodies.”

Since last Monday, at least 243 Gazans, including 66 children, were killed by Israeli airstrikes, using U.S.-made warplanes and bombs. Twelve Israelis have been killed by rockets fired by Gazan militants.

This week, in response to the alarming scenes of civilian devastation emerging from Gaza, several U.S. lawmakers launched efforts to block the transfer of more U.S. weapons to Israel. Last week, Rep. Rashida Tlaib, the first Palestinian American member of Congress, delivered an impassioned speech on Palestinian human rights on the House floor, and 25 lawmakers condemned Israel’s forced displacement of East Jerusalemite Palestinians from their homes.

This movement in Washington follows weeks of online organizing around disturbing scenes of Israel’s disproportionate violence against Palestinians on the ground across the Holy Land. In recent weeks, Palestinian activists mobilized demonstrations, strikes, and viral social media campaigns providing new entry points to Israel’s longstanding human rights abuses against Palestinians. The unfolding violence and resistance has opened new conversations about the U.S.’s unconditional military support for Israel, even as congressional resolutions on the issues are unlikely to advance.

A shifting conversation thousands of miles away stands to be cold comfort in Gaza, where 11 days of war imposed a massive cost on civilians, straining medical care resources.

By Monday, Gaza’s al-Shifa Hospital issued a desperate plea for volunteers to donate blood and warned that shortages of critical supplies, including water, electricity, and fuel, were already jeopardizing its patient care. By Wednesday, Gaza’s Ministry of Health released an emergency $46 million appeal in response to the infrastructure damages and shortages within the Gazan health care sector. The escalating war casualties, paired with the pressures of the coronavirus pandemic, threatens to collapse a health care system that human rights groups say was already overwhelmed and its capacity deliberately degraded by the Israeli siege.

“When we see these images of war in Gaza, people often forget that this is a territory that has been under siege for nearly 15 years. What that means is that the Palestinians inside the territory have been drip fed everything from food to medicine,” Amnesty International’s Sherine Tadros told The Intercept. “When a war hits, the Gazans are starting from a situation that is already dire, a situation that is already inexcusable.” A nurse holds a Omar al-Hadidi, who was pulled alive from under the rubble while seven other family members perished, at al-Shifa Hospital, after an Israeli airstrike struck al-Shati Refugee Camp without advance warning during the night, in Gaza City early on May 15, 2021.

Israel has been accused of targeting health care workers and facilities in each of its three previous military campaigns in Gaza. Yet, in this war, it is Israel’s bombing of the major streets around al-Shifa Hospital that represented a new low for the doctors and paramedics trying to provide emergency care.

“It is a basic right of a person to be able to seek medical help when they need it, let alone in Gaza during the war,” said Tadros. “And the targeting of civilian infrastructure, including roads that civilians use to go to a hospital, is inexcusable and will, no doubt, lead to even more death.”

Hazareen, the doctor at al-Shifa, described such scenes. “Victims lost their lives at the last minute before reaching the hospital because of the bombing of the roads,” he said. “That is devastating for all of the health care workers.”

“The last war” — in 2014 — “was unbelievable because it lasted almost two months, and there were so many massacres,” Hazareen said. “But this war is different and difficult because most of the targets are houses and towers and roads, so no one understands why they are hitting these targets, and we are just living with an obsessive fear of these strikes.”

“The killing of doctors is a brutal act of warfare, indescribable in the context of Gaza.”

It was one of these chaotic airstrikes that delivered a further blow to Gaza’s health care professionals. Last Sunday, in what became the deadliest day in Gaza so far during this bombardment, 42 people were killed in a series of airstrikes in a neighborhood near al-Shifa Hospital. Among the many civilian casualties, two doctors, Ayman Abu al-Ouf and Mooein Ahmad al-Aloul, were killed within hours of each other at home with their families. It took rescue teams days to pull civilians from the rubble, and the airstrikes on the road delayed paramedics’ access to the hospital.

Both prominent doctors lived in the neighborhood precisely because of its close proximity to al-Shifa Hospital. Al-Aloul was one of Gaza’s only neurologists, and al-Ouf led al-Shifa’s coronavirus response as well as its Department of Internal Medicine.

“Dr. Ayman Abu al-Ouf was a pioneer of internal medicine here in Gaza, also a pioneer of free treatment for patients and just beloved by his patients and colleagues. Many Gazan doctors and students studied at his hand,” Harazeen said of his al-Shifa Hospital colleague. “He was distinguished by his love for his work and his patients.”

Outside al-Shifa Hospital, doctors and staff held a grim impromptu funeral for al-Ouf. It took more than 10 hours to recover his body from the bombing site, where other members of his family were also killed.

“This is a tragedy for his family and his colleagues, but it is also a loss of a medical professional who was saving lives and educating future generations of Gazan doctors,” said Tanous of Physicians for Human Rights–Israel. “It’s so important to understand that the occupation has limited the workforce of Gaza, preventing medical professionals from leaving to get specialized training, so it’s not like there are 10 other doctors who will come the next day or a massive list of specialists. So beyond the devastation his death means for our colleagues, the killing of doctors is a brutal act of warfare, indescribable in the context of Gaza.”

Gaza has not been spared from the pandemic. On Monday, an Israeli airstrike nearby Gaza’s only Covid-19 laboratory rendered it inoperable. Two weeks ago, a deadly surge in cases had finally begun to decline. With the hospitals now overwhelmed by war injuries and nearly 60,000 Gazans evacuated to crowded temporary shelters, United Nations officials warned that coronavirus cases could spike again.

“Whether attacks on doctors or coronavirus, we need to stop treating these emergencies as ‘the red line’ that is finally crossed in Gaza,” said Tanous. “Yes the Israelis were preventing vaccines, they targeted medical facilities, they’ve killed medical workers. But they crossed the red line years ago, we are so far past the red line. We need to look at the whole architecture of occupation that forces our colleagues to work in an impossible, absurd system and denies Gazans their health care and human rights.”

At al-Shifa Hospital, Harazeen said his colleagues are living minute by minute, patient by patient, praying Thursday’s ceasefire will hold, preventing further war injuries or additional damage to Gaza’s medical facilities. This is how they will honor their fallen colleagues, he said: through their service to Gazan patients and by training the next generation of Gazan health care professionals.

“Gaza will rise again as we always do. It is pure misery here, but we are working unstoppably to save the lives of the injured,” said Harazeen. “Doctors, nurses, paramedics, and our neighbors defend our people with our souls, hand in hand, and we will remain steadfast until our last breaths, cursing the occupation all the time.” 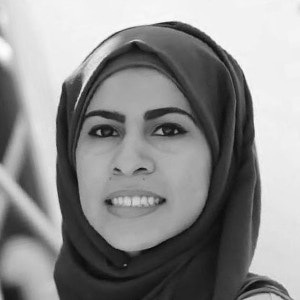