Emily Wilder’s Firing Is No Surprise: AP Has Always Been Right-Wing

From its founding during the Mexican-American War to its reporting on Latin America today, AP’s always been quietly conservative. 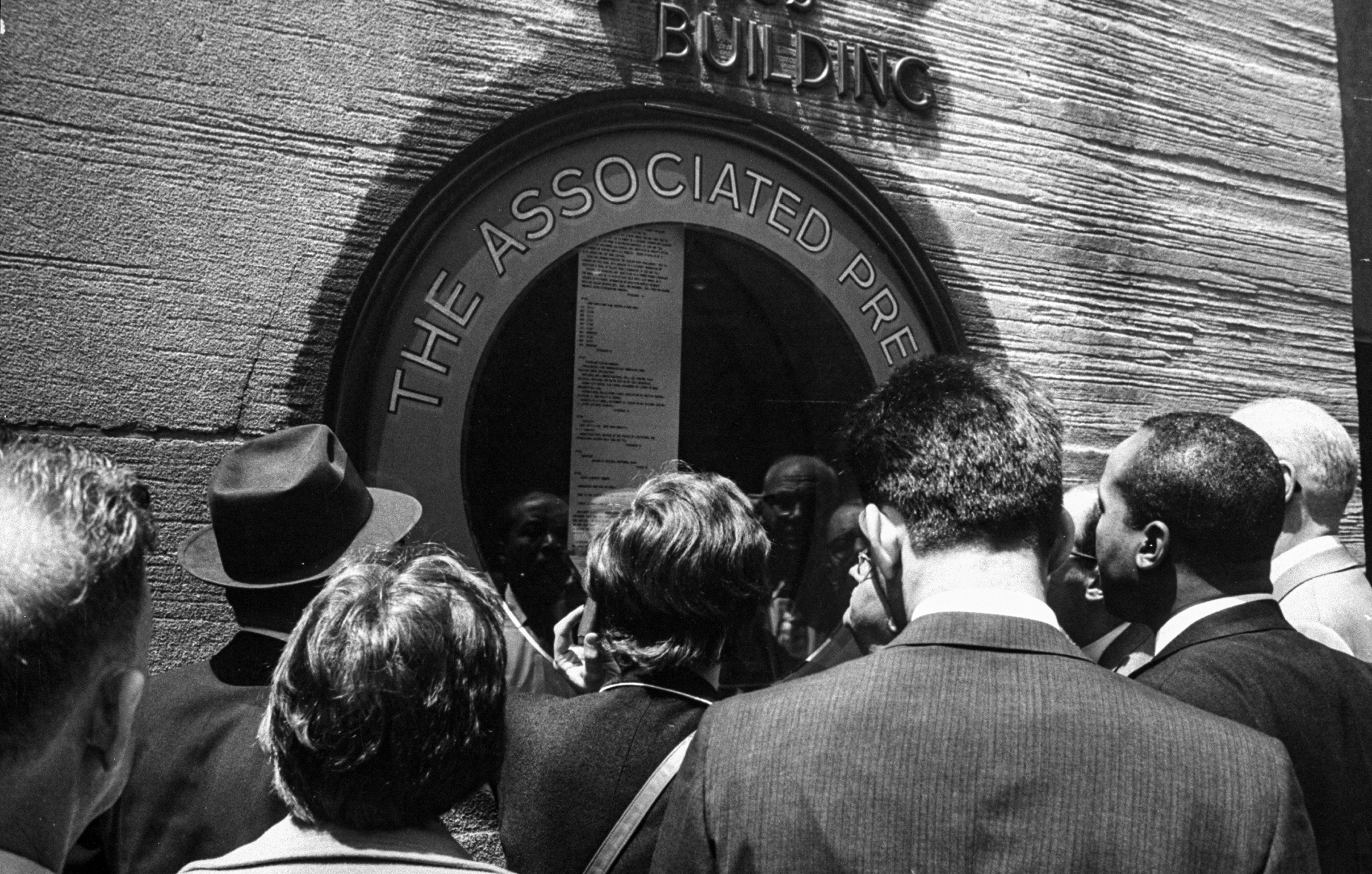 New Yorkers stop to read the news on the Associated Press ticker in New York on May 1, 1960.

The Associated Press has received an enormous amount of criticism, including from its own staffers, for firing Emily Wilder, 22, after hiring her as a news associate just 17 days before. According to AP, Wilder was let go for “violations of AP’s social media policy.” AP’s action was clearly in response to a right-wing pressure campaign targeting Wilder for her activism in college supporting Palestinian rights.

Though appalling, however, none of this should be a surprise. AP has been notably conservative since its founding in 1846, with a long history of bowing to the demands of the powerful — with its many talented journalists often forced to fight its management to get the news out. While other wire services such as United Press International and Reuters have not always covered themselves in glory, AP’s history demonstrates significantly more bias.

AP has long been one of the most important news organizations in the world. A nonprofit cooperative with over 1,000 member papers, it produces 2,000 stories per day, with its reporting often the main or only coverage of many stories. According to AP itself, over half the world’s population regularly sees its work. Mahatma Gandhi once joked, “When I get to the Hereafter and stand at the Golden Gate, the first person I shall meet will be a correspondent of the Associated Press.”

That’s why it’s crucial to understand AP’s perspective. It’s arguably baked into its DNA: AP was created by Moses Yale Beach, the publisher of the New York Sun, who arranged for five New York newspapers including the Sun to share the cost of covering the Mexican-American War. In retrospect, the war was a straight-up theft of Mexican territory, including all of California, by the U.S. It was justified by shameless deceit by President James K. Polk, as both Presidents Abraham Lincoln and Ulysses S. Grant accurately said. Yet it was covered by AP as the fulfillment of America’s manifest destiny, reflecting Beach’s fervent belief that the U.S. should seize as much territory as possible. Beach even traveled to Mexico as an agent of the U.S. government, using a false British passport, in an attempt to undermine the Mexican war effort. This would not be seen today as a stellar example of media objectivity.

This general point of view continued with AP’s coverage of the wars between Indigenous people and the federal government after the U.S. Civil War. When AP correspondent Mark Kellogg left to cover the Battle of Little Bighorn in 1876, his final dispatch read, “By the time this reaches you we would have met and fought the red devils, with what result remains to be seen. I go with Custer and will be there at the death.” The phrase “at the death” did not mean that Kellogg expected that he and Custer would die. On the contrary, it’s language borrowed from fox hunting that means being present when the animals are run to ground and killed. Instead, to Kellogg’s surprise, both he and Custer died during the fray.

As union organizing and worker revolts burgeoned in the early 1900s, AP became notorious among progressives for its reactionary coverage. After a huge 1913 mine worker strike in West Virginia, the socialist magazine The Masses pointed out that AP’s local representative was a member of a military tribunal judging the strikers. This was accompanied by a cartoon depicting AP’s president dripping poison into a reservoir labeled “The News,” filling it with “lies,” “suppressed facts,” and “slander.” In response, AP managed to have the editor of The Masses arrested for criminal libel.

A 1913 political cartoon, titled “Poisoned at the Source” and published in The Masses, shows a man representing the the Associated Press poisoning the well of “the news” with lies, prejudice, suppressed facts, slander, and hatred of labor organization.

Illustration: Art Young for The Masses

AP’s slant during this period is extensively documented in “The Brass Check,” a 1919 book by the famed muckraker Upton Sinclair. A study of the American press, “The Brass Check” was once almost as famous as “The Jungle,” Sinclair’s novel about the meatpacking industry. In it Sinclair writes, “By far the greater part of the news which the American people absorb about the outside world comes through the Associated Press … There is no more important question to be considered by the American people than the question, Is the Associated Press fair? Does it transmit the news?”

Sinclair goes into great detail about AP’s coverage of one incident during the large-scale 1913-1914 strike in Colorado’s coal fields that led to the notorious Ludlow Massacre, in which 21 people were killed, including not just miners but their wives and children. President Woodrow Wilson had sent a telegram to Colorado’s governor demanding to know why he hadn’t taken action to settle the strike. The governor wrote back that “a committee on mediation on the present strike has been provided for and appointed,” and Wilson accepted this as sufficient. But the governor was lying to Wilson: No such committee existed. Sinclair repeatedly attempted to get AP to cover this. The organization explicitly refused.

“There is no more important question to be considered by the American people than the question, Is the Associated Press fair? Does it transmit the news?”

Sinclair was later arrested during a silent vigil in New York City for the Ludlow victims. AP falsely reported that Sinclair’s wife had been arrested with him and then refused to correct it. His wife’s right-wing father saw the story and threatened to disinherit her.

AP’s conservatism continued for the rest of the century. Seymour Hersh, who worked for AP from 1962 to 1967, later said editors there were “timid on Vietnam” and that he could not have written his 1970 exposé of the My Lai Massacre for the wire service. In 1984, at a time of great fear of nuclear war with the Soviet Union, President Ronald Reagan “joked” before a radio address that “I’m pleased to tell you today that I’ve signed legislation that will outlaw Russia forever. We begin bombing in five minutes.”An AP reporter filed an article on this, but editors didn’t publish it — until other news outlets ran the story. That same year, Secretary of Defense Caspar Weinberger asked AP not to run what it knew about the launch of a military satellite. AP happily obeyed.

But probably the most egregious behavior by AP during this time involved its coverage of the U.S.-backed Contras, who were attempting to overthrow Nicaragua’s Sandinista government. Two AP reporters, Robert Parry and Brian Barger, worked for nine months on a story about the involvement of Contra leaders in cocaine smuggling. After what Barger later described as “excruciating” editing, AP killed the article. It only saw the light of day thanks to strange happenstance, when an editor on the AP Spanish language wire saw it in the computer system, didn’t realize it had been spiked, and ran it in translation. It was later reported that AP’s Washington bureau chief was regularly meeting during this period with Oliver North, then a staffer on Reagan’s National Security Council, who was well aware of the Contras’ drug running and was doing everything possible to cover it up. Parry and Barger both later quit AP in frustration.

AP’s more recent performance has been much the same. Domestically it often espouses standard right-wing economic nostrums proven wrong by history: In 2008, AP said presidential candidate Barack Obama wasn’t being honest about “the crushing budget pressures he would face in office.” In reality, Obama’s key mistake would be not pushing Congress to spend enough money to bolster the economy. When Eric Garner was killed by New York police, AP gave full-throated voice to the perspective of the New York Police Department, beginning an article by stating, “Garner was overweight and in poor health. … When police came to arrest him, he resisted. And if he could repeatedly say, ‘I can’t breathe,’ it means he could breathe.”

In its overseas coverage, AP often appears still stuck in the Cold War. In 2009, a group of Latin American scholars bought a full-page ad in the Columbia Journalism Review to point out two glaring factual misrepresentations by AP in its Venezuela coverage. According to AP, the country’s then-president Hugo Chávez had claimed that an attack on a synagogue “might have been carried out by Jews eager to portray his government as anti-Semitic.” Chávez had never said this and in fact had strongly condemned the attack. Chávez also had not, as AP claimed, urged “world leaders to back [Colombia’s FARC’s] armed struggle.” In 2013, after Chávez died, AP criticized him for investing “Venezuela’s oil wealth into social programs including state-run food markets, cash benefits for poor families, free health clinics and education programs.” The results from this, AP bizarrely wrote, were “meager compared with the spectacular construction projects that oil riches spurred in glittering Middle Eastern cities, including the world’s tallest building in Dubai and plans for branches of the Louvre and Guggenheim museums in Abu Dhabi.”

Seen in this 175 year-long context, it makes perfect sense that AP would immediately get rid of Wilder at the first sign of trouble. AP has sometimes produced great journalism, but often despite rather than because of its natural inclinations. Time and again, the organization has rushed to propitiate the powers that be — even when it comes at their reporters’ expense.