Some of the top Defense Department officials — including Defense Secretary nominee Lloyd Austin — have deep ties to the private sector. The prospect of another retired general becoming secretary of defense before finishing the mandatory seven-year, post-service waiting period wasn’t the only problem looming over President Joe Biden’s nomination of Lloyd Austin for the Cabinet position. The former four-star head of U.S. Central Command also sat on the board of Raytheon, a multibillion-dollar defense contractor that would be vying for the Pentagon’s most lucrative deals, raising questions about the military’s impartiality when issuing awards.

Austin’s nomination arrived on the heels of a corporate-ridden Defense Department under the Trump administration. Before Austin, another person with ties to Raytheon, the contractor’s chief lobbyist Mark Esper, held the reins of the Pentagon. Esper’s predecessors, Patrick Shanahan and James Mattis, had respectively been a senior vice president at Boeing and a board member of General Dynamics. Ellen Lord, the former president and CEO of Textron Systems, oversaw the Pentagon’s weapon acquisitions.

After the abundant conflicts of interest in Trump’s White House, some in Biden’s party pushed for someone without industry ties to lead the Defense Department.

“Despite President Trump’s boast that he would ‘drain the swamp’ and hire only ‘the best people,’ he has continuously failed to do so,” Reps. Mark Pocan, D-Wis., and Barbara Lee, D-Calif., wrote in a November 2020 letter to Biden. “We strongly encourage you to reject the mistaken nominations of the Trump era; and, again, commit to appointing Secretaries of Defense with no previous ties to defense contractors.”

Biden ignored their call. Whatever differences he has from Trump, a rejection of the revolving door between industry and the Pentagon is not one of them. In addition to Austin, the new White House has nominated or appointed a slew of corporate executives to serve at the upper echelons of a federal department whose enormous budget funnels billions of dollars to private companies every year.

Jack Poulson, executive director of the accountability nonprofit Tech Inquiry, which tracks tech and defense contractor influence in government, noted that there seemed to be a bipartisan consensus on the cozy relationship between the private and public sectors.

The pattern of Biden appointments of high-level Pentagon officials straight from consulting firms and corporations seeking influence with the government, said Poulson, risks “something close to pay-to-play in the tech national security arena.”

Ronald Moultrie, Biden’s pick to serve as Under Secretary of Defense for Intelligence and Security, comes from at least a dozen consulting firms and contractors, which he joined after holding positions in the National Security Agency, Central Intelligence Agency, and Navy.

He notably was a board member of Altamira Technologies, a defense contractor that recently won an award worth up to $950 million to support the Air Force’s Advanced Battle Management System program that’s creating a high-speed network for military personnel to share information as they’re taking potentially lethal action.

For what differences Biden has from Trump, a rejection of the revolving door between industry and the Pentagon is not one of them.

Moultrie has a background that involves overt influence peddling, including work as a paid adviser to Resolute Public Affairs, a lobbying shop that touts its ability to intervene on behalf of clients on sensitive matters such as controls of foreign investments. Moultrie reported earning $350,000 since 2020 from the firm on his disclosure forms.

Moultrie also sat on the board of Pallas Advisors, a “strategic advisory firm specializing in navigating complex national and international security dynamics” founded by Sally Donnelly, a senior adviser to Mattis during his tenure as defense secretary. Donnelly, a former Amazon consultant, notoriously facilitated a private dinner between Mattis and Amazon CEO Jeff Bezos while the Pentagon was developing a solicitation for a $10 billion Joint Enterprise Defense Infrastructure cloud services contract. That contract is now entangled in a lawsuit Amazon filed after Microsoft won the award.

Silicon Valley-based corporations like Amazon have had growing influence inside the Department of Defense as the military embraces big data. The Pentagon has launched outreach initiatives like the flagship Defense Innovation Unit, whose managing director, Michael Brown, is now Biden’s choice to serve as Under Secretary of Defense for Acquisition and Sustainment, the position Lord previously held.

Brown leads the Pentagon’s primary outreach to California’s technology giants — and was himself formerly CEO of Symantec Corporation and Quantum Corporation, multibillion-dollar companies in the cybersecurity and computer storage industries.

In a recent “virtual fireside chat” with Eric Schmidt, the former Google CEO who previously served as the founding chair of the Department of Defense’s Innovation Board, Brown expounded on the success of DIU for facilitating military partnerships with Silicon Valley. He emphasized that there was much more to be done.

“We need more cross-pollination, so there needs to be more folks from the tech world who get into government and going back out,” said Brown. 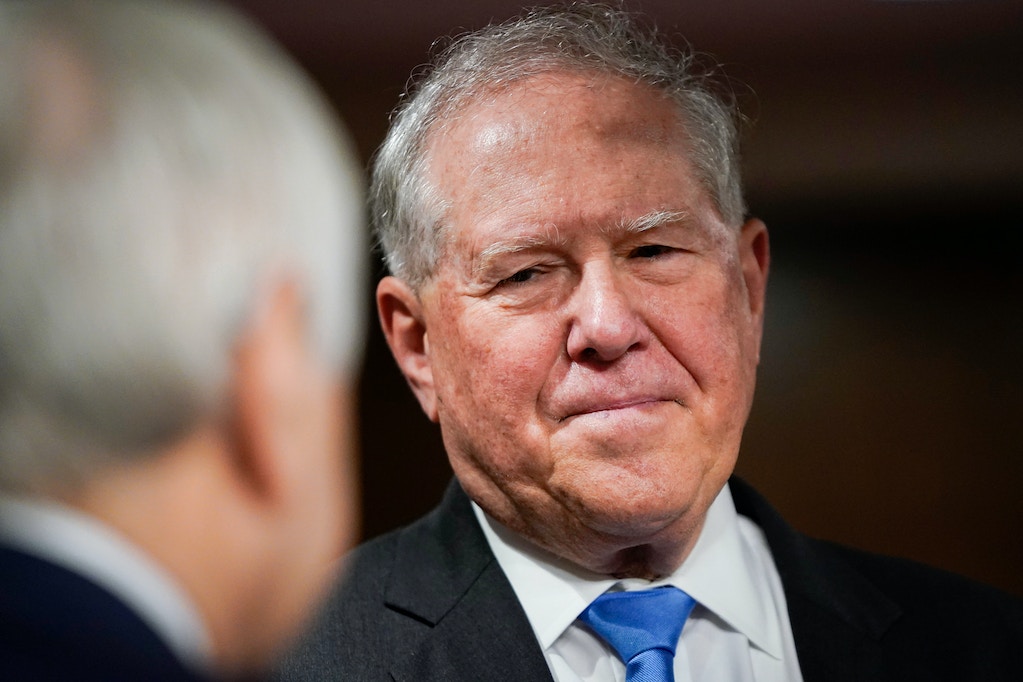 Frank Kendall talks before the start of his confirmation hearing to serve as secretary of the Air Force before the Senate Armed Services Committee in Washington, D.C., on May 25, 2021.

This week, the Senate Armed Services Committee reviewed the nomination of Frank Kendall, chosen by Biden to lead the Air Force. Kendall, a former vice president at Raytheon who served as Under Secretary of Defense for Acquisition, Technology, and Logistics for President Barack Obama, has spent the last few years as an adviser and consultant to defense contractors. Kendall’s disclosures show that the bulk of his income has come from advising Northrop Grumman, followed by income from Renaissance Strategic Advisors, an investment firm that arranges mergers and acquisitions in the defense sector.

Shawn Skelly, nominated as the assistant secretary of defense for readiness, comes to the Pentagon from CACI International, the sprawling contractor that serves military bases around the world.

The Biden administration is embracing corporate executives at a time when the Defense Department is acknowledging the disastrous effects of the neoliberal outlook that has dominated the corporate world since the 1980s.

“Together, a U.S. business climate that has favored short-term shareholder earnings (versus long-term capital investment), deindustrialization, and an abstract, radical vision of ‘free trade,’ without fair trade enforcement, have severely damaged America’s ability to arms itself today and in the future,” a January report from the Pentagon’s industrial policy office states.

Biden’s appointee to oversee this office, Jesse Salazar, comes from none other than management consulting giant McKinsey, responsible for facilitating mergers, acquisitions and offshoring that have consolidated industries and supply chains and moved manufacturing overseas.

While not working inside the Pentagon, Pete Buttigieg’s leadership of the Transportation Department is likely to bring another McKinsey alum in close proximity to the Defense Department, as the two set eyes on emerging aerospace technology. Buttigieg’s predecessor Elaine Chao, for example, participated in an industry event hosted by the Air Force last year to engage makers of electric vertical take-off and landing vehicles, or flying cars. Heidi Shyu speaks during her confirmation hearing to be Defense undersecretary for research and engineering before the Senate Armed Services Committee in Washington on May 25, 2021.

Heidi Shyu, nominated to be the Under Secretary for Defense Research, runs an aerospace and defense consulting firm, through which she advises a range of contractors as a consultant and a board member to several companies. Shyu advises traditional defense giants, such as Boeing, General Electric, Raytheon, and Northrop Grumman, according to her recently filed ethics disclosure.

Shyu, a former Pentagon official in the Obama administration, also serves on the board of several drone-focused ventures, including Auterion Government Solutions, a start-up that provides artificial intelligence software for drones to the Pentagon, and Levitate Capital, which invests in autonomous aerial vehicles.

The Office of the Secretary of Defense, notably, will be staffed by many officials with close ties to contractors. Elizabeth George, the deputy general counsel for the Pentagon, is a former outside Google attorney through the firm Wilson Sonsini Goodrich & Rosati. Ahmad Khan, a special assistant to the secretary, comes from Govini, a start-up that won a $400 million contract in 2019 to help the Pentagon analyze data. Ely Ratner, also appointed as an adviser to the secretary, previously consulted for the defense IT firm SAIC and for WestExec Advisors, a firm founded by former Obama administration officials to help Silicon Valley firms win contracts with the government.

“Much of Biden’s policy circles are already strongly vying for increases to the Pentagon budget under a ‘great-power competition’ framing, especially with respect to integrating AI into U.S. battle networks,” said Poulson, the executive director of Tech Inquiry. “The recent wave of industry appointments certainly raises concern.”