The Biden Administration Is Routinely Sending Mexican Children Back to Danger, Report Finds

While the administration vowed to end Trump’s practice of expelling unaccompanied minors, the practice persists for children from Mexico. 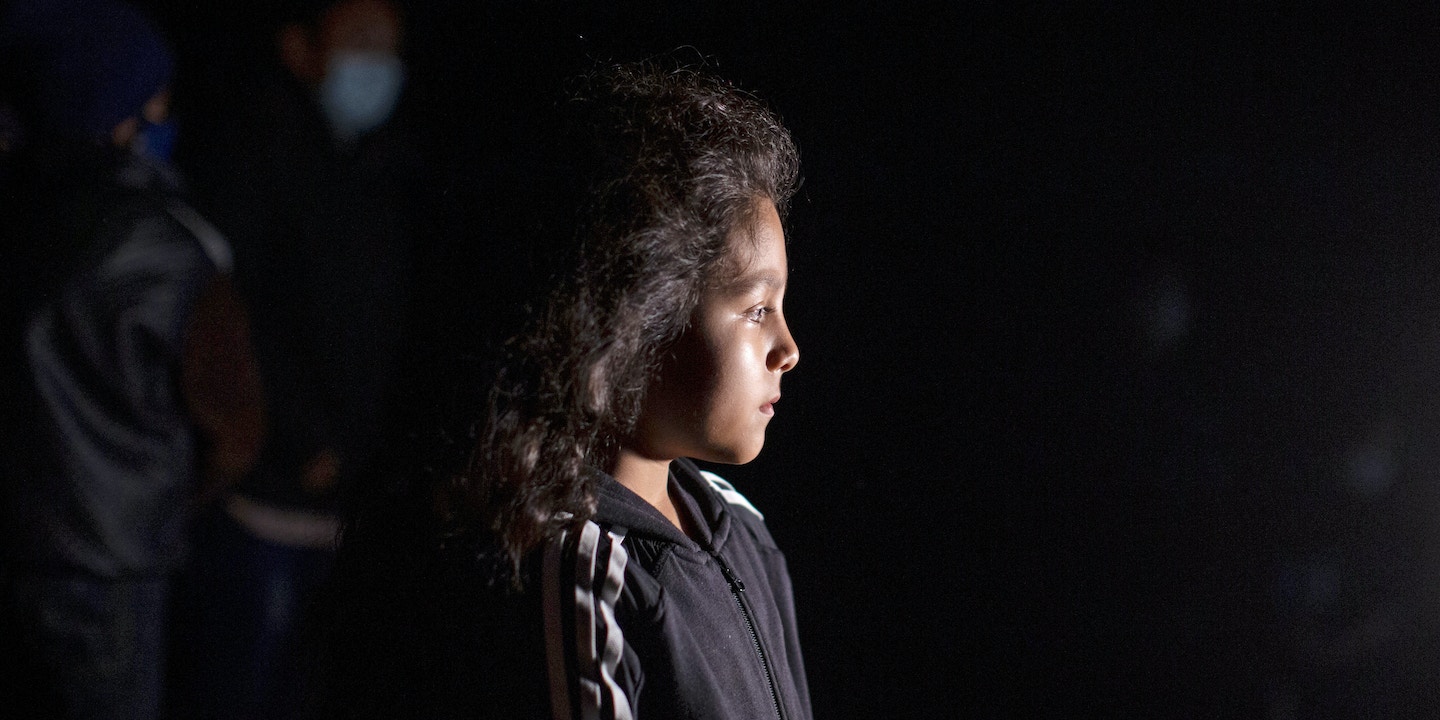 The Biden administration is presiding over the systematic and illegal removal of unaccompanied Mexican children seeking asylum at the border, according to a new report, with thousands of vulnerable young people returned to a country that has experienced staggering levels of violence in recent years.

The report, published by Amnesty International on Friday, comes just days after Vice President Kamala Harris, in her first foreign trip since entering office, visited Guatemala and Mexico, where she told would-be migrants and asylum-seekers not to come to the U.S. and that they would be turned back if they did. As legal experts and immigrant rights advocates were quick to point out, seeking asylum is a right protected under international and domestic law.

According to interviews and data obtained by Amnesty, the U.S. and Mexico have engaged in the systematic violation of those laws in their treatment of unaccompanied Mexican children, 95 percent of whom were returned to Mexico over a six-month period, often without screening to determine whether they faced threats in their home country. Brian Griffey, the author and lead researcher on the report, said that when his team began working on the project in early 2020, the plan was not to focus on unaccompanied Mexican children.

“One of the things that surprised us when we were down there speaking with Mexican authorities, was to find out that the vast majority of unaccompanied kids that they were processing in shelters and such were actually Mexican kids being returned by the U.S.,” Griffey told The Intercept. “This is clearly a protection gap, through which the U.S. Border Patrol is pushing tens of thousands of unaccompanied Mexican kids back potentially into harm’s way.”

In Ciudad Juárez, the sprawling border city opposite El Paso, Texas, Customs and Border Protection returned 750 unaccompanied Mexican children from January to May of this year. “This compared to 744 in all of 2020, and 1,283 in all of 2019,” the Amnesty report said. Juárez was experiencing nearly 100 murders a day during that same period, with May marking the deadliest month of the year in the city. Shelter managers in Juárez told Amnesty researchers that they had resorted to putting some of the children returned by the U.S. into hiding, given the threats they faced in Mexico.

Since 2006, when the so-called war on drugs became a military campaign in Mexico, more than 400,000 people have been killed. Large regions of the country are frequently home to rampant violence and impunity. Many border cities in the north of the country, the localities where the U.S. removes people to on a regular basis, are among the most dangerous, particularly for migrants and asylum-seekers who are often targets of extortion and kidnapping.

“One in every three migrants and asylum-seekers from Central America and Mexico is a child, and half of them are unaccompanied by family members or other adults,” Amnesty noted in its report, adding that Department of Homeland Security Secretary Alejandro Mayorkas has said that more than 80 percent of those children have family members waiting to receive them in the U.S. “The fact that almost none of the tens of thousands of unaccompanied children being processed by” the Office of Refugee Resettlement, or ORR, “have been Mexican nationals showcases the Biden administration’s failed promise not to turn away unaccompanied migrant children to the same threats of harm that they fled,” the report said, referring to the Department of Health and Human Services office responsible for unaccompanied children who cross the border.

Since March 2020, the U.S. has enforced Title 42, a Centers for Disease Control and Prevention rule pushed through by Stephen Miller, Donald Trump’s hard-line, anti-immigrant adviser, with the onset of the coronavirus. Under the rule, border authorities have assumed the power to rapidly “expel” individuals encountered between ports of entry in the borderlands without any semblance of due process or a hearing and regardless of whether they are exercising their right under domestic and international law. More than 867,000 expulsions and counting have been carried out since the rule went into effect, raising the possibility that the Biden administration could preside over the millionth expulsion to result from the most sweeping border enforcement initiative of the Trump era.

Unlike the Trump administration, which booted at least 13,000 children back across the border under Title 42, the Biden administration has largely stopped using Title 42 to expel most unaccompanied children. Yet Amnesty found that Mexican children seeking asylum are facing a different reality, with border officials using a separate law — one ostensibly designed to protect vulnerable youth — to systematically remove unaccompanied Mexican children from the U.S.

The administration does not deny the policy. On the contrary, in an interview with an El Paso television station last month, President Joe Biden’s assistant White House press secretary and immigration adviser Vedant Patel said, “The policy right now for Mexican unaccompanied minors is for them to be repatriated through that process.” As Amnesty noted, the policy was further confirmed in a joint HHS-DHS report documenting the number of unaccompanied youth in government custody. In a footnote, the document said: “This number does not include children from Mexico, most of whom will be repatriated and will not remain in CBP custody.”

From November through April, roughly one in five of all unaccompanied children apprehended by the Border Patrol were Mexican. In May, CBP informed Amnesty that it had returned more than 10,000 of those children to Mexico, while referring “only a few hundred” to ORR.

“In total, unaccompanied Mexican children were returned to Mexico more than 22 times as often as they were transferred to ORR after being apprehended by the US Border Patrol,” Amnesty found. “Unaccompanied Mexican children were therefore returned to Mexico in approximately 95 percent of cases after being apprehended by US Border Patrol.” The report added that the “systematic forced returns of Mexican children by US authorities often happened without the legally required screenings of the children for fear of return to Mexico, which are supposed to ensure they are not being returned to harm or are victims of human trafficking.”

Amnesty says that border authorities are “misusing” a provision in the Trafficking Victims Protection Reauthorization Act that applies only to Mexican and Canadian children and prohibits the U.S. from sending them to dangerous conditions. The anti-trafficking legislation requires that CBP officials screen children to confirm they are not afraid to return to Mexico and do not require protection, that they are not victims of human trafficking, and that they are returning voluntarily. However, a 2020 study in the Journal on Migration and Human Security found that CBP officials failed to screen approximately half of the unaccompanied Mexican children whom they encountered and that a majority of the children interviewed for the study “had no idea they were signing forms consenting to their returns to Mexico.”

“CBP is … perverting a protection system in order to unlawfully turn away almost 100 percent of Mexican children.”

A Tijuana-based social worker, speaking to Amnesty in April and May of this year, said unaccompanied children returned to the border city “were almost never informed of their rights or asked if they feared return, prior to their being repatriated.” Once in Tijuana, the Amnesty report added, unaccompanied children often face “abuses by municipal police, who discriminated against and targeted the children due to their vulnerability, subjecting them to arbitrary arrests, robbery, and excessive use of force.”

The TVPRA also requires U.S. border agents to adhere to binational repatriation agreements that stipulate when and where people can be returned to Mexico. Here, too, Amnesty found unaccompanied Mexican children exposed to danger, with U.S. officials returning children at locations and times not included in agreed upon repatriation accords. As The Intercept reported in March, CBP has expanded the ports through which it returns people to Mexico since Title 42 went into effect to include locations controlled by organized crime where migrant resources are largely nonexistent.

Griffey, the Amnesty researcher, said that “CBP is the clear villain of this abusive behavior because they’re perverting a protection system in order to unlawfully turn away almost 100 percent of Mexican children.” Remarking on Harris’s statements in Guatemala and Mexico earlier this week, he added, “But to hear Biden administration officials defend and implicitly authorize that abuse is equally alarming and damning.”

It is true that there are people who would seek asylum but do not qualify, Griffey said, “but to suggest that the thousands who do qualify for asylum protection should nonetheless stay in deadly situations at home, or be unlawfully sent back to that harm by the U.S. if they do run for their lives is, in my view, an abrogation of U.S. legal commitments and just basic humanity in the treatment of people in need — and that especially applies for the situation of children who are at risk every step along the migrant trail.”