From London’s Grenfell fire to Miami’s Champlain Towers South, politicians need to be held to account for gutting regulations that could mitigate disasters. Four years ago in London, a fire sparked by a malfunctioning appliance tore through the entirety of a 24-story residential tower block, leaving 72 people dead and over 200 hundred without a home. While situated in one of the city’s richest neighborhoods, the high-rise building was part of a public housing complex, home to low-income, working-class Londoners.

The tower block’s name — Grenfell — is now synecdoche for a tragedy borne of government austerity, property sector avarice, and disregard for human life. Residents who had complained that the building was unsafe had been ignored or even threatened with lawsuits; the government body that oversaw the complex was found to have chosen cheaper, more flammable insulation materials for its walls, which accelerated the blaze. The country’s Conservative government had championed deregulation and neoliberalization, enacting vicious cuts to social services. Grenfell was the result.

As about 150 people remain unaccounted for following the collapse of the Champlain Towers South condominium complex near Miami, with 11 found dead so far, I could not help but think of Grenfell.

With more robust regulation, prioritizing human life over property and profit, these deadly events could have been mitigated.

The analogy is not perfect. For instance, the condo residents are wealthy property owners; Grenfell residents were some of the poorest in London, relying on the state to house them safely. And the time elapsed since the horrors of Grenfell have given us insight into the multifaceted failures, whereas we do not yet know the precise cause of the Miami building collapse.

Yet the tragedies share a crucial commonality. Irrespective of the particular causes, with more robust regulation, prioritizing human life over property and profit, these deadly events could have been mitigated, perhaps even avoided. Grenfell and Champlain Towers South are what can happen when the vagaries of the market determine how we live: when housing is first and foremost seen as property and asset, and not as dwelling for human beings. The latter view opens the door to the sort of regulations that could have potentially averted these disasters — basic efforts like regular, timely inspections and high-grade building materials — by catching them in early, even nascent stages.

Such change is infuriatingly unlikely because there is so little accountability for the authorities responsible for imposing such regulatory regimes and dealing with the fallout of subpar housing.

I would like to say that Grenfell changed everything — that this catastrophe of austerity and corporate governance served to reshape the British government’s treatment of housing to serve people over profit. It did not. Boris Johnson is prime minister and his Tory government has overseen a death-dealing pandemic with the same discriminatory disregard as his colleagues and predecessors in Parliament oversaw Grenfell.

Sajid Javid, secretary of state for housing, communities, and local government at the time of the Grenfell fire, has now been awarded the role of secretary of state for health and social care, which includes overseeing Britain’s Covid-19 response. Following the fire, Javid consistently failed on promises to swiftly rehouse surviving residents and would not commit government funding to something so crucial as sprinkler systems in tower blocks.

One of the grimmest lessons of Grenfell, then, is that even the most terrible of mass death events do not ensure necessary political change. The powerful are all too happy to weather the tragedies of their own making, from which, on the whole, they do not suffer. 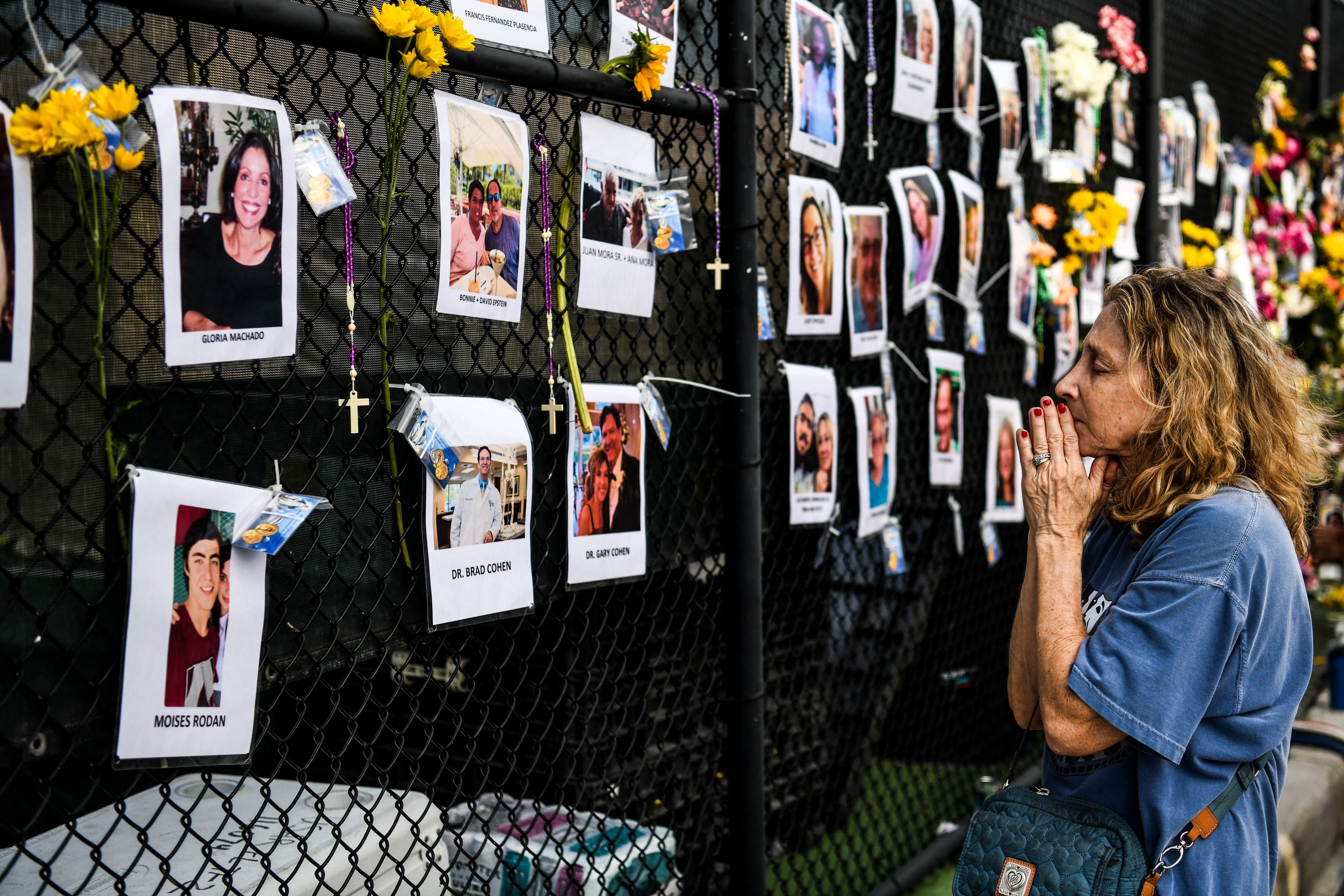 A woman prays in front of photos at the makeshift memorial for the victims of the Champlain Towers South condo collapse, near the site of the accident in Surfside, Fla., on June 27, 2021.

Despite the differences between Champlain and Grenfell, that tighter regulations could have mitigated the tragedies is as evident in the early Miami news as it was when the cheap, highly flammable insulation made headlines in London.

In 2018, a report by an engineer on the Miami condo found evidence of “major structural damage” to the concrete slab below the pool deck and “abundant” cracking and crumbling of the columns, beams, and walls of the parking garage. A major repair project was beginning on the building, but only three years after the fact — tragically too late. Residents had complained of cracks and water leakage in their apartments too. Blame has understandably been laid at the feet of the condo board, which was responsible for building repairs.

Unlike Grenfell, the Miami building was not under the government’s remit, but rules governing safety checks and audits are very much the purview of politicians and public officials. “Florida law only requires that buildings and properties be structurally inspected every 40 years, which is the process the fallen condo was undergoing before the collapse,” wrote Fabiola Santiago in the Miami Herald. “That is far too long to go without an audit of conditions that affect hundreds of people, as this horrific collapse has demonstrated.”

Santiago also cited Democratic Florida state Sen. Annette Taddeo, who tweeted that “buildings need to be inspected much sooner than 40 years, especially in a county where sea level rise can affect a foundation.”

If the lesson from the condo collapse is that regulations must shift toward more frequent checks, that would be something. The horror of the event will no doubt prompt other condo boards to act with swift concern for their own buildings. Residents in public and low-income housing, however, may not have the resources to ensure their blocks — built on imperiled terrain — are protected.

“Assuming we continue letting the neoliberal approach of money mattering most guide our public policy efforts, we will choose to protect the most expensive real estate first, and best,” noted Desmog Blog two years ago in a post on the Miami real estate industry. “Those who can afford to lobby policymakers to protect their prized property with sea walls and raised sidewalks will be fine, and communities who can afford to buy and install new pumps might not be too upset, at least in the first few decades.”

The Champlain Towers South collapse has highlighted how a neoliberal approach to regulation can make victims of the wealthy too. There can be little doubt, however, that it is the poor who will suffer most if this disaster does not prompt politicians to act to ensure safer housing for all.

There certainly needs to be government support for buildings whose owners themselves cannot cover timely checks and audits. And even this will be insufficient in a part of the country threatened by climate devastation, where property developers nonetheless build and sell waterfront properties as if the world were ending — and it is. Instead of a structural reckoning with the livability of the land and the protection of all residents, pumps are installed, and roads and buildings are raised in piecemeal efforts.

“I think we know enough right now to say that there is a material and physical crisis facing buildings in Miami,” wrote Susan Matthews in Slate, urging a focus on climate decimation. “We know that we should feel more urgency to do something about the problem facing the people who live there.”

Shortly after the Grenfell fire, as the building’s charred remains still stood, author Youssef El-Gingihy wrote that “Grenfell has become a grim monument, a ghastly tomb symbolising the Tory austerity regime; arguably it is bigger than that — a proxy for the unmitigated folly of the neoliberal ideology of deregulated free market orthodoxy favoured by successive governments.”

Nowhere is that ideology as entrenched as in the U.S., and the Miami building collapse may, too, become a symbol of its unmitigated folly. This will not, however, be sufficient to establish a politics for people over profit. Yet it is a reminder that we must.