A new law banning “vulgar” vanity plates sets the stage for a free speech showdown in the Pine Tree State. 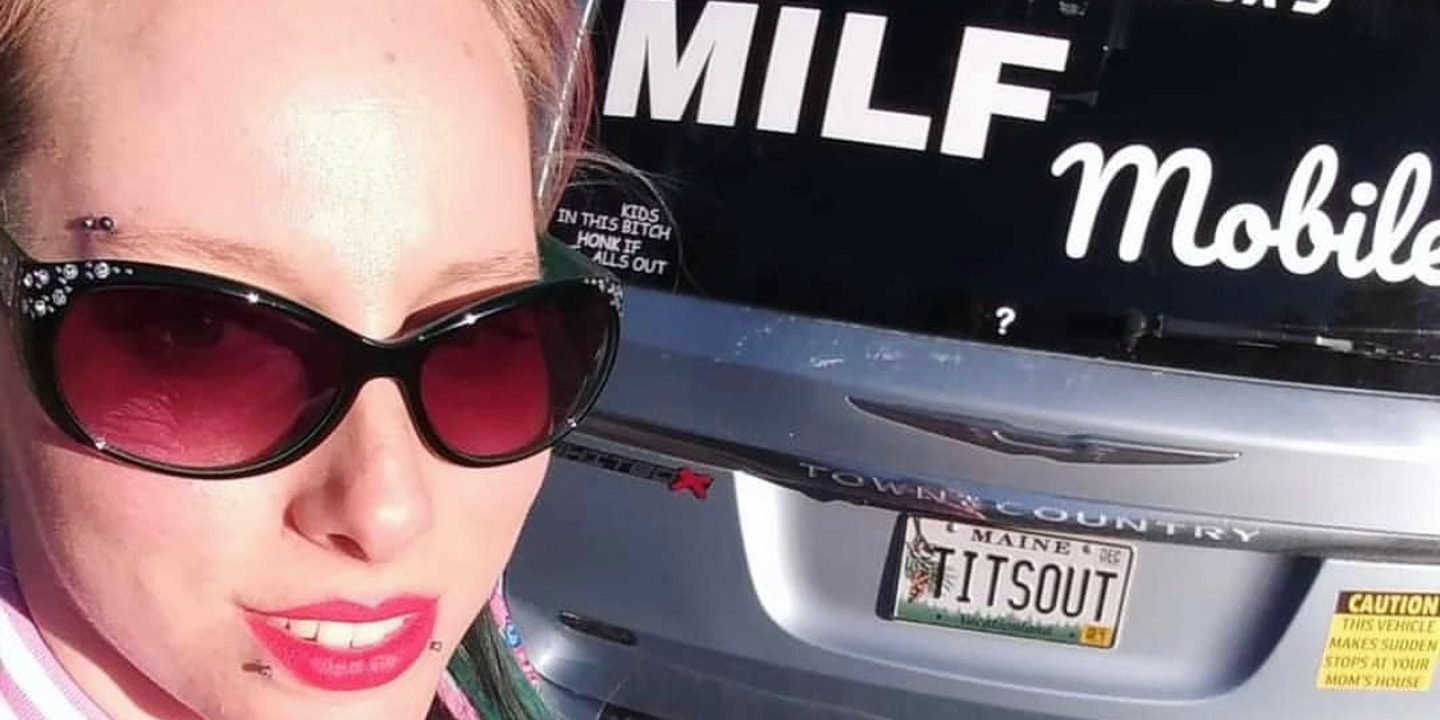 “Everyone loves my van, except for Karens,” Glidden said, referring to a pejorative term for entitled white women. “Karens hate it.”

“The plate references the fact that I exclusively breastfed all four of my children,” Glidden said. “And that I frequently drive topless. Maine is in fact a topless state.”

On January 19, a new bill aimed at banning “vulgar and obscene” vanity plates was introduced by state Sen. William Diamond, D-Windham. He previously served as Maine’s secretary of state during the vanity plate program’s creation in 1989.

The program’s founding purpose was to create “fun and creative” tourist attractions that make money for the state. By those standards, the initiative has been a success. There are currently over 119,000 registered vanity plates in Maine, and the program generates $2 million annually.

In 2015, however, a new law was passed in Maine eliminating the secretary of state’s power to reject vanity plates containing “obscene, contemptuous, profane or prejudicial” messages. Diamond now wants to change that.

“I’m no prude or interested in letting Big Brother run our lives, but what we are now allowing has gone way beyond the original intent of the vanity plate program,” Diamond said. “This is not an attempt to implement strict puritan guidelines. … There are plenty of opportunities for free speech.”

Diamond’s proposal asserts that vanity plates are “state property” and can be recalled at any time. It also allows the secretary of state to reject “vulgar and obscene” plate applications.

Maine’s current secretary of state, Shenna Bellows, strongly supports Diamond’s proposal. She testified in favor of his vanity plate bill at a public hearing before the state Legislature’s Joint Standing Committee on Transportation on May 4.

“One of my favorite games on road trips as a kid was the license plate game. But sadly, this is not a game I’d recommend to kids on Maine’s roadways today,” Bellows said during her testimony. “You just can’t escape the proliferation of the F-word or worse. And that’s because we have witnessed a rise in offensive plates.”

Bellows said about 420 plates are currently vulgar enough to be banned. Examples include thinly veiled profanities like “PHUK U2,” “IEATA55,” “L8RBTCH,” and “PPL SUC.” Online acronyms like “OMWTFYB,” which means “On My Way To Fuck Your Bitch,” and “OMGSTFU,” or “Oh My God Shut The Fuck Up,” were also included on Bellows’s target list.

“I’m not worried about vanity plates at all. My children hear and see much worse than that every day in TV, books, news and video games,” Glidden said. “I have four children; they are 14, 11, 7, and 5. All of them love my vehicle. My older kids have experienced increased popularity because of it, which is pretty funny.”

On May 5, Diamond’s bill was advanced from the Transportation Committee with a 7-4 vote in favor of its passing. Maine’s Senate and House subsequently approved Diamond’s bill on June 8, and Gov. Janet Mills signed it into law a week later.

Glidden, who voted for Bernie Sanders in 2016 and libertarian Jo Jorgenson in 2020, wasn’t happy with the outcome. She says the new vanity plate law is a First Amendment violation and is now planning a vehicular free speech protest.

“I’m working on a design for a large vinyl wrap for my van. It’ll say ‘TITS OUT’ in huge letters with a diagonal red streak with swear words filling the whole thing,” Glidden said. “Like if the lyrics to the song ‘Shit Piss Fuck’ by Blink-182 were made into a giant, obnoxious decal. It might just make the state wish they hadn’t even worried about offensive vanity plates.”

Vanity plate protests aren’t the state’s only problem. They’ll also likely face First Amendment-related appeals and lawsuits, for which license plates have been used as cudgels for over 40 years.

In 2014, for instance, David Montenegro, whose legal name is “Human,” successfully sued the New Hampshire Division of Motor Vehicles after officials rejected his application for a “COPSLIE” vanity plate but agreed to issue him “GR8GOVT” instead.

New Hampshire’s Supreme Court ultimately struck down the DMV’s “offensive to the good taste of a reasonable person” vanity plate standard as a result of Human’s suit, citing its violation of the state constitution’s free speech clause in the 5-0 decision.

Dave Wardamasky of Blue Hill is one example of upcoming free speech conflicts in the Pine Tree State. Wardamasky has amyotrophic lateral sclerosis, or ALS, also known as Lou Gehrig’s disease. His license plate currently reads “FUCKALS.” Under Maine’s new law, Wardamasky’s message would technically be interpreted no differently than a plate that says “FUCKYOU.”

“I rarely get negative feedback from anyone about my plate, but frankly, I welcome it when I do,” Wardamasky said. “I tell them to take your outrage at a single-syllable word and turn that outrage to this horrible disease, ALS. People are dying from this, and nothing is getting done.”

Wardamasky says the vanity plate is an homage to those fighting ALS and his own frustration dealing with the illness. He has battled the disease for almost two years and considers himself “lucky” to have had such a slow progression — one of his friends recently took the “forever dirt nap” just six months after being diagnosed.

“I used to love hiking, being outdoors. Now, because of ALS, I can’t even walk to the bathroom,” Wardamasky said. “I can’t empty the dishwasher or put the plates away. I can’t grab coffee mugs from the top shelf. Fuck ALS. I try to button my pants or tie my shoes? Not going to happen. Fuck ALS.”

Glidden and Wardamasky believe that the new vanity plate law and recall effort are a waste of the state’s time, money, and resources. They both plan on appealing the state’s decision to recall their plates.

“We got what, five years of being able to have whatever we want on license plates because of ‘freedom of speech,’” Glidden said. “And now suddenly someone whined like a spoiled brat, can you say Karen, so ‘freedom of speech’ no longer applies?”