From its headquarters just blocks from the White House, a small, high-powered team of former ambassadors, lawyers, and Obama appointees has spent the past few years solving problems for the world’s biggest companies.

Less than six months into the Biden administration, more than 15 consultants from the firm WestExec Advisors have fanned out across the White House, its foreign policy apparatus, and its law enforcement institutions. Five, some of whom already have jobs with the administration, have been nominated for high-ranking posts, and four others served on the Biden-Harris transition team. Even by Washington standards, it’s a remarkable march through the revolving door, especially for a firm that only launched in 2017. The pipeline has produced a dominance of WestExec alums throughout the administration, installed in senior roles as influential as director of national intelligence and secretary of state. WestExec clients, meanwhile, have controversial interests in tech and defense that intersect with the policies their former consultants are now in a position to set and execute.

The arrival of each new WestExec adviser at the administration has been met with varying degrees of press coverage — headlines for the secretary of state, blurbs in trade publications for the head of cybersecurity — but the creeping monopolization of foreign policymaking by a single boutique consulting firm has gone largely unnoticed. The insularity of this network of policymakers poses concerns about the potential for groupthink, conflicts of interest, and what can only be called, however oxymoronically, legalized corruption.

“The private sector can in essence co-opt the public sector.”

WestExec does not affirmatively share its clients, and public financial disclosure forms only offer broad outlines. Kathleen Clark, a law professor at Washington University in St. Louis, says that government ethics laws written decades ago aren’t equipped to handle a situation in which a single firm launches 15 senior officials. “Yes, they’re employed by the government, I’ll grant you that. But are they actually working for the American people or not? Where does their loyalty lie?” said Clark. “The private sector can in essence co-opt the public sector.”

“These White House officials are experienced government leaders whose prior private sector experience is part of a broad and diverse skill set they bring to government service,” said a White House spokesperson in a statement. WestExec did not reply to a detailed list of questions for this story.

The firm describes one of its chief selling points as its “unparalleled geopolitical risk analysis,” now confirmed by the saturation of its employees in positions of power. WestExec has also succeeded in getting tech startups into defense contracts and helped defense corporations modernize with tech; it worked to help multinational companies break into China. One of its collaborators is the defense-centered investment group Pine Island Capital Partners, which launched a SPAC, or “blank check” company,” last year. Tony Blinken advised Pine Island and was a part owner. (Michèle Flournoy, another WestExec co-founder, had her nomination to be secretary of defense nixed. President Joe Biden instead nominated Lloyd Austin, himself a former Pine Island partner but not a WestExec consultant.)

What makes WestExec “boutique” is the promise that its executives would have face time with its seasoned policymakers. “We felt other firms brought people in for big names and never got to see the big names,” said one WestExec co-founder in 2020. “Tony is on client calls.” 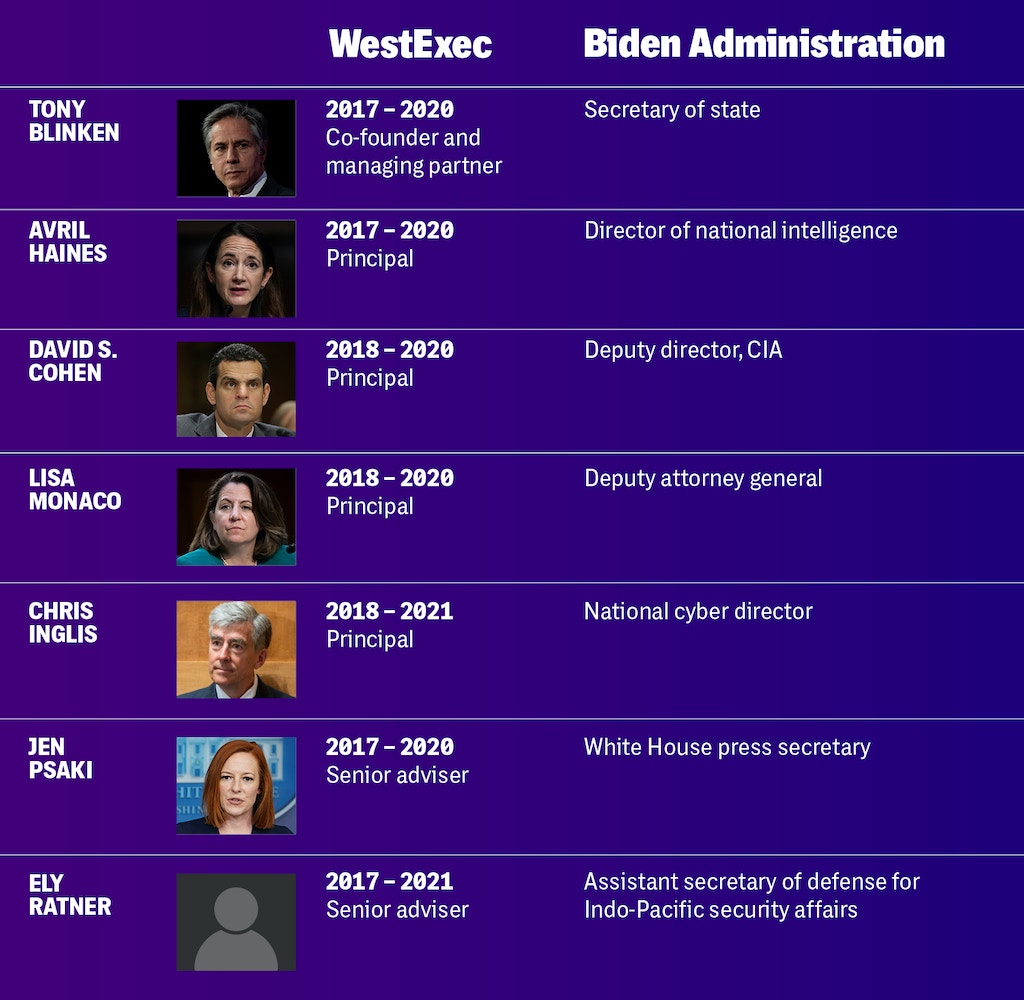 The WestExec to Biden administration pipeline, part one.

Blinken, now secretary of state, advised household names like telecommunications giant AT&T, defense contractor Boeing, shipping magnate FedEx, and the media company Discovery as a WestExec founding partner. He worked for Big Tech pillars Facebook, LinkedIn, Microsoft, and Uber. He helped niche companies like speakers bureau GLG, art seller Sotheby’s, and biopharmaceutical company Gilead Sciences. Blinken also lists clients that are global investment firms and asset managers, like Blackstone, Lazard, Royal Bank of Canada, and the multinational conglomerate SoftBank — which does extensive business with the Kingdom of Saudi Arabia. He even advised the consulting group McKinsey & Company. Though Blinken left WestExec in July 2020 — after The American Prospect inquired about the relationship — each of these businesses has an international profile that may impact his calculations as he implements Biden’s foreign policy.

Blinken also brought several of his key staff members at the State Department with him from WestExec. His senior adviser Julianne Smith, who listed Boeing and SoftBank as clients, earned $34,000 as a WestExec consultant while holding down a full-time role at the think tank German Marshall Fund. Smith has been nominated to be permanent representative to NATO. (Blinken also brought WestExec executive assistant Sarah McCool to the State Department as his director of scheduling.) Barbara Leaf, a former ambassador to the United Arab Emirates, worked for the firm and advised the National Basketball Association. She went on to serve as Biden’s senior director for the Middle East at the National Security Council. Leaf awaits a vote to be the State Department’s assistant secretary for Near Eastern affairs. Meanwhile, consultant Daniel B. Shapiro, Obama’s ambassador to Israel and a “very busy” early member of the firm, according to his colleague, is being floated as a Middle East envoy. The Prospect revealed last summer that one of WestExec’s clients was Windward, an Israeli artificial intelligence company that specializes in ship tracking.

The firm also provided a comfortable place for Biden’s most powerful intelligence chiefs to wait out the Trump administration. Director of National Intelligence Avril Haines had her name scrubbed from WestExec’s website early on, but she worked with the firm from October 2017 to July 2020, when she joined Biden’s transition team as foreign policy lead. According to a questionnaire completed before her confirmation hearing, she delivered “strategic advice” on “cyber norms; national security threats; and testing, evaluation, validation and verification of machine learning systems by the Department of Defense” to clients like Facebook, JPMorgan Chase, Microsoft, and Open Philanthropy. Deputy Director of the CIA David S. Cohen was an early member of WestExec’s “core team” alongside Haines and Blinken. But it’s impossible to know who his clients were, because an exemption for the spy agencies’ officials means that his disclosure is not publicly available.

“That exempts them from public accountability,” said Clark, the ethics expert at Washington University, “and that’s a problem because we can’t necessarily rely on internal controls and external, public disclosure.” A CIA spokesperson declined to share the companies Cohen worked for at WestExec.

Then there’s Chris Inglis, who the Senate recently approved as national cyber director. He earned $15,000 from the firm and worked for internet security outfit CrowdStrike and email encryption company Virtru.

Since its founding in 2017, WestExec’s focus has been to enhance the capabilities of defense, intelligence, and law enforcement agencies. It partners with the Silicon Valley venture firm Ridgeline, which describes itself as “mission-driven” —  meaning that unlike some tech investors, which avoid working with the military, Ridgeline seeks out military products. Both Cohen and Inglis appeared on Ridgeline’s website, and through that partnership, Blinken invested in the venture group’s many portfolio companies. The obscure startups have kooky names (Agolo, Doodle, Wallaroo, etc.) but are innovating advanced technologies like drones, artificial intelligence, and robots. The alumni of WestExec are deeply engaged in emerging tech, which could lead to conflicts of interest as they take on policymaking roles that affect the contracts the government greenlights.

One of the administration’s most visible faces also worked at the firm. Jen Psaki, now the White House press secretary, was a senior adviser to WestExec, where she did crisis communications for the Israeli facial recognition software company AnyVision and advised the nonprofit Spirit of America. 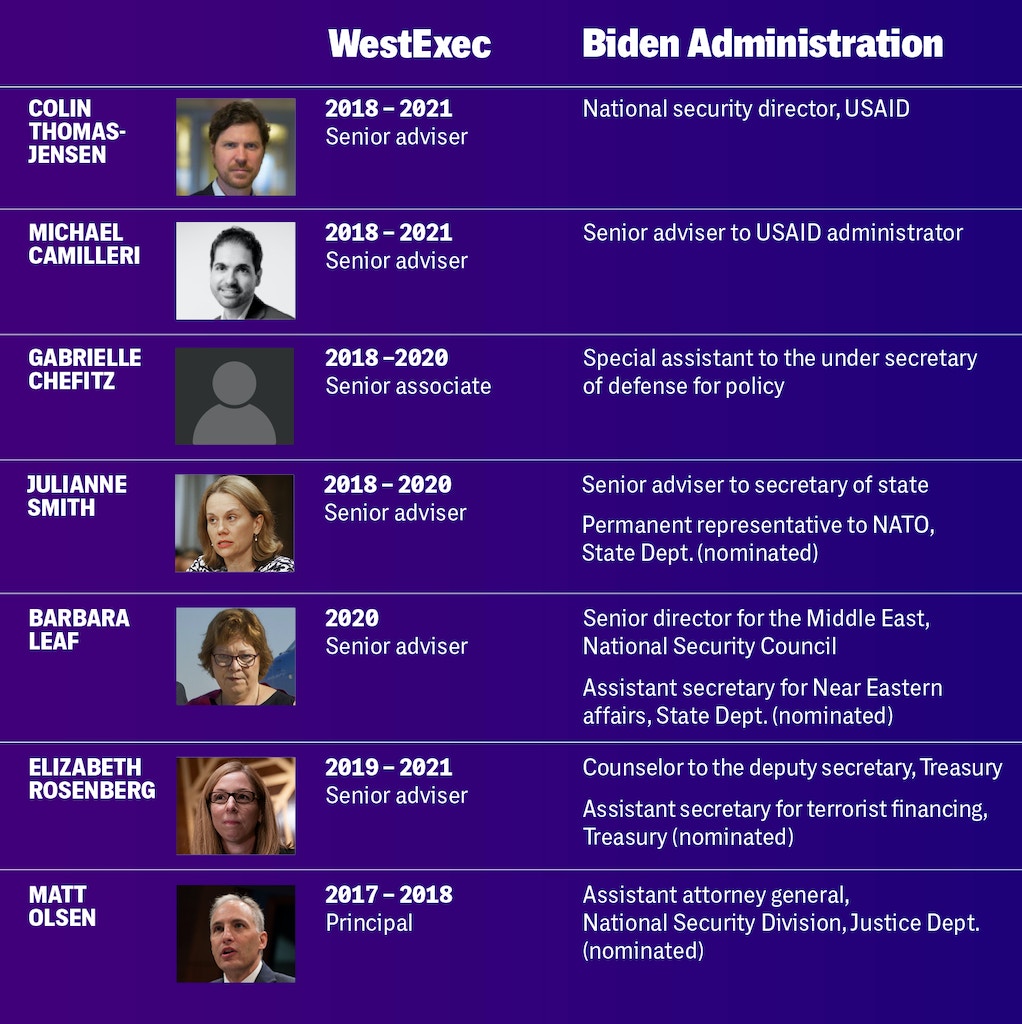 As companies faced the Covid-19 pandemic’s massive challenges, Lisa Monaco joined Blinken on client calls. As a WestExec adviser, she worked for Boeing and SoftBank. Now Monaco is the U.S. deputy attorney general. Before Matt Olsen earned millions of dollars as a senior official at Uber, he worked early on as a principal for the firm. Biden has nominated Olsen to be assistant attorney general in the National Security Division.

Ely Ratner is developing China policy for the Defense Department as assistant secretary for Indo-Pacific security affairs. At WestExec, according to his Office of Government Ethics forms, “Billable hours were for background white papers without identified clients and most income was passive retainer.” Though he only earned $11,450 at WestExec, he did so while making more than $400,000 at the think tank Center for a New American Security.

WestExec’s consultants are so connected and pedigreed that they often hold down multiple jobs, appointments, and titles. That’s how someone like Elizabeth Rosenberg, a former WestExec senior adviser, can join the Treasury Department as a senior official without much notice. At the end of May, Biden nominated Rosenberg to be Treasury’s assistant secretary for terrorism financing. In her LinkedIn profile, she says she has managed federal initiatives to “promote financial transparency.” Her role at WestExec fell off the bio that the White House released publicizing the nomination.

And it’s not just international policy that will be shaped by the firm. Erin Pelton, who works in the White House as a senior adviser on domestic policy, provided advisory services to WestExec. And the nominee to be the Department of Commerce’s assistant secretary for industry and analysis, Grant Harris, has a connection to the firm. His personal consulting firm Connect Frontier, which advises companies and organizations working in developing markets, hired WestExec.

“West Exec’s advisors have worked together at the highest levels of government, navigating and anticipating the impact of international crises on decision making — we can provide the same insights and strategies to business leaders around the world,” Blinken said in an early pamphlet advertising the firm.

A half-year after Blinken’s return to government, the pamphlet is still featured on WestExec co-founder and managing partner Nitin Chadda’s LinkedIn profile. It’s a reminder to potential clients about the firm’s enduring proximity to power.