Nick Taurus — the homophobic and antisemitic racist who tried to hijack the California representative’s town hall — is not popular, but he is dangerous. Rep. Katie Porter, the progressive California Democrat, came face to face on Sunday with one of her potential rivals in next year’s midterm election: a young white supremacist, homophobe, and anti-vaxxer who boasts of engaging in street fights with racial justice protesters.

The far-right candidate for the Republican nomination in Porter’s CA-45 House district, Nick Taurus, disrupted Porter’s first in-person town hall since the pandemic began, at a park in Irvine. Taurus, wearing a blue “American First” cap and flanked by his father and a handful of fellow Trump supporters, brought the online tactic of trolling to life by heckling Porter aggressively enough to provoke a fight with other members of the crowd. 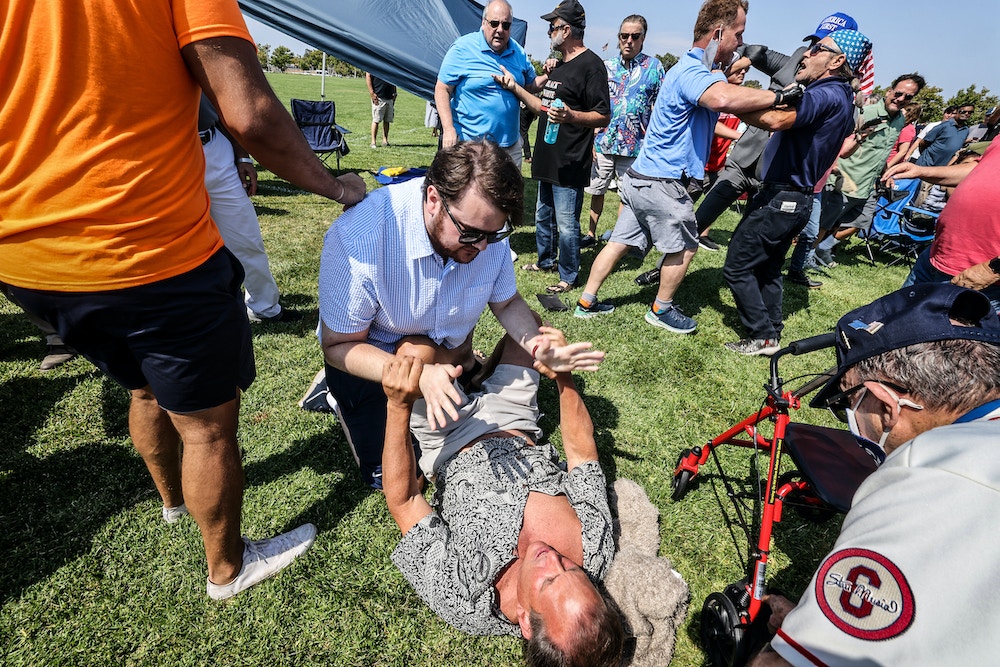 Joe Camera, a Trump supporter who promotes the conspiracy theory that Israel staged the 9/11 attacks, was knocked down during a brief skirmish in Irvine, Calif., on Sunday, after Nick Taurus disrupted Rep. Katie Porter’s community event.

After at least one Trump supporter standing near Taurus was knocked down, and a small canopy collapsed, Facebook video of the incident recorded by a witness, Bethany Gilboard, showed that Porter rushed toward the conflict, and put her arms around an elderly woman and a Navy veteran who were seated near the hecklers. 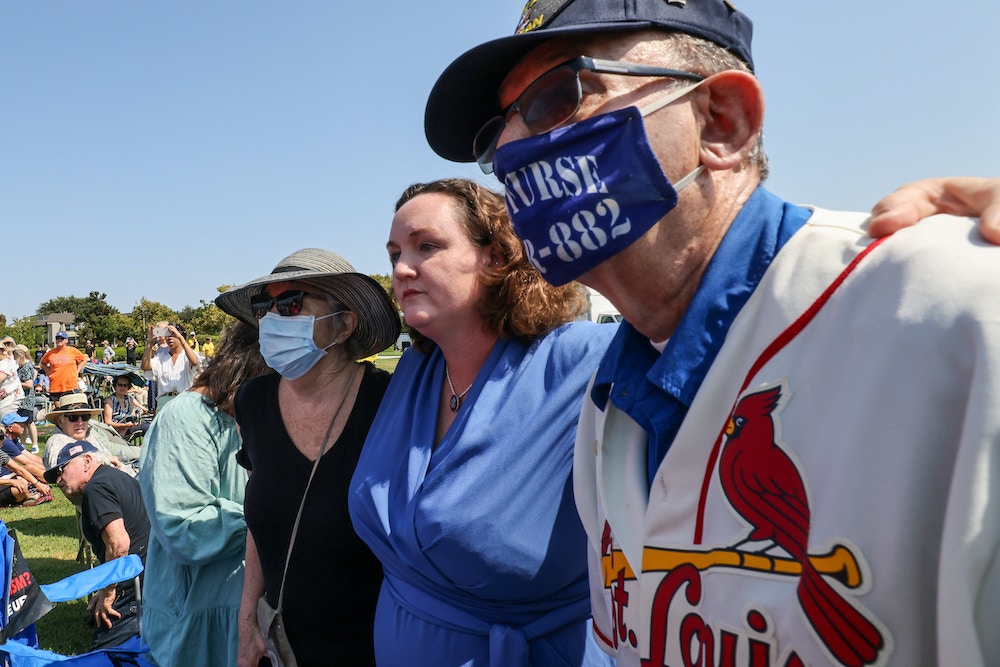 Rep. Katie Porter, the California Democrat, shielded two supporters from a physical confrontation provoked by supporters of a far-right Republican who hopes to replace her.

Taurus was then seen on video calling for the police to arrest a man who had shoved his father. A man identified by Irvine police as a Porter supporter was given a citation and released, and officers took a report of assault and battery.

An altercation ensued and punches were thrown at Katie Porter’s Town Hall event when her ‘America First’ challenger Nick Taurus showed up to confront her with some of his supporters. pic.twitter.com/Wiq6qwInx7

After the event, the Los Angeles Times reported, Taurus badgered members of the audience to say if they were from America. One Porter backer, Alex Mohajer, a political activist and commentator, wrote on Twitter that the Taurus contingent “called me a faggot and told my 72-year-old Iranian American mother that she wasn’t a real American and should go back to Iran.”

While Taurus’s stunt failed at its original purpose — since he had hoped to get viral video of himself railing against Porter during the Q&A section of the event — the physical altercation did succeed in getting the Los Angeles Times to quote directly from an unhinged rant against Porter he had posted on Instagram and to report the anti-Porter slogans chanted by the hecklers, which were prepared by his campaign.

Porter told “Pod Save America” on Monday that the fact that Taurus said he had crashed her event to “confront” her was a clue that he and Republicans who failed to condemn the provocation were not interested in “civil dialogue” or debate. “Confronting someone is an aggressive act, it’s not an act of mutual respect,” Porter added, “it’s inconsistent with democracy.”

Taurus, 29, is a rabid Trump supporter but also an acolyte of Nick Fuentes, the founder of the openly white supremacist America First movement who has been kicked off social networks but embraced by Rep. Paul Gosar, the far-right Arizona Republican whose objection to certifying his state’s vote in the 2020 presidential election on Jan. 6 helped provoke the storming of the Capitol. Fuentes, who took part in the 2017 white power rally in Charlottesville, Virginia, was outside the Capitol on January 6 and encouraged the crowd to block the transfer of power.

A legend and inspiration to us all! Thanks for stopping through SoCal @NickJFuentes a true patriot! pic.twitter.com/bbBB2o30gn

Taurus met Fuentes last month, days after the racist influencer had called the raid on the Capitol “awesome,” as Zachary Petrizzo reported for Salon. “Trump was awesome because he was racist. Trump was awesome because he was sexist,” Fuentes told viewers of his “America First” streaming show. “The only thing Trump wasn’t awesome for was being antisemitic; he wasn’t antisemitic.” (Fuentes appears unwilling to read between the lines of Trump’s speeches and offhand remarks.)

When he stepped forward to confront Porter on Sunday, Taurus was wearing the blue “America First” cap Fuentes sells to dedicated fans, who are united, in part, by their deep antisemitism.

After he disrupted Porter’s event, Taurus recorded a rambling Instagram live account of the incident in which he referred, again and again, to the fact that employees of J Street, a pro-Israel advocacy group for liberal Zionists, or their family members, are among Porter’s leading donors. Rather than explain clearly that all of these individual donors are Americans who support Israel, Taurus incorrectly referred to J Street as “a foreign lobby” and, with scarcely concealed antisemitism, accused Porter of being “concerned more about what’s going on in Tel Aviv” than in her district.

Taurus, who announced his candidacy last month with a statement claiming that Americans are currently oppressed by “anti-White extremists and the GAY mafia,” is also a fervent supporter of the racist, homophobic leader of Hungary, Viktor Orbán. During a stint teaching English in rural Hungary after college, Taurus got his young students to pose for a photo he posted on Facebook flashing the “OK” hand gesture, used by online white supremacists to signify white power.

This photo of Nick Taurus in a Hungarian classroom still gives me weird vibes. Wonder what subject he taught… pic.twitter.com/V8eEbQaOTt

Taurus and his father Marcae have been intentionally provoking conflict for years. In 2017, they started at least two fights when they appeared on the campus of Cal State Fullerton in MAGA hats holding signs that read “Islam is rape culture” and “Muhammad is a terrorist.”

“I came here to be purposely provocative,” Taurus told Ashlyn Ramirez of the Daily Titan college newspaper at the time, claiming that his pro-Trump, anti-Islam display was just about free speech.

At a right-wing rally in Huntington Beach in February, Taurus loudly, and mistakenly, accused a far-right videographer, Kalen D’Almeida, of being “antifa” because he was dressed in black and wearing a mask.

At the Tito Ortiz protest, a conservative journalist got accused of being Antifa by other conservatives ? pic.twitter.com/vJM4msPofe

When D’Almeida — who had spent most of the previous year trying to undermine left-wing activists, by gathering video of violence on the fringes of racial justice protests — claimed to be a “nonpartisan” reporter, Taurus replied, “Nonpartisan? What does that mean?”

More recently, Taurus harassed the son of a local official during a deranged anti-vaccine protest outside her home in May. “Your mom sucks!” Taurus chanted at Orange Country Supervisor Katrina Foley’s son, after he had retreated into his house.

“Your mom is a big pharma wh0re,” OC anti-Science protester Nick Taurus yelled from his megaphone as Orange County Supervisor Katrina Foley’s son arrives home during a “peaceful protest” out front of his house. pic.twitter.com/I7TAUTqsnS

Taurus and other megaphone-wielding protesters had descended on Foley’s home in Costa Mesa after she voted in favor of voluntary digital vaccine passports, which would document covid-19 vaccination status. Foley, a Democrat, told the LA Times that she regretted that her Republican colleagues had caved to pressure from anti-vaccine activists and decided to shelve the use of an app that would have offered local businesses “a convenient, opt-in, voluntary” way to confirm that patrons had been vaccinated. “We are appeasing a very small faction of our community who actually are not going to get vaccinated,” she said.

While Taurus’s toxic political views appear to have generated little support in the district, at least so far — as evidenced by the fact that he has just 18 Twitter followers, and barely 500 people, not all of them fans, have subjected themselves to his Instagram rant about the Porter event — there is something chilling about his presence in the race, no matter how marginal, given his history of engaging in violence at racial justice protests.

After he provoked the fight at Porter’s event, antifascist activists in Southern California worked to draw the attention of political reporters to clear visual evidence of Taurus attacking protesters last year. But what’s perhaps more disturbing is that Taurus himself seems proud of his violent track record.

Two weeks after he announced his candidacy, Taurus posted video of a speech he gave in which he called on right-wing activists to take action to stop left-wing protesters. “We shouldn’t be letting them come out and protest,” he said. “They’re not here to protest; they’re here to provoke us. Never forget that. Their very presence is a provocation.”

This video, posted on social networks by @NickTaurus45 - the white supremacist who provoked a fight at @RepKatiePorter's event on Sunday - appears to show that he is proud to have been filmed attacking racial justice protesters (via @donna_susan12)pic.twitter.com/J239wXLhYX

The video closes with a brief montage of political violence carried out by Taurus set to the soundtrack of Barry Goldwater’s infamous 1964 speech accepting the Republican nomination for president. As Goldwater intones, “I would remind you that extremism in the defense of liberty is no vice!” the video cuts to a clip of Taurus stealing a “Black Lives Matter” sign from a protester in Yorba Linda, California, in September, and ripping it up. Then, as we hear Goldwater say, “And let me remind you also that moderation in the pursuit of justice is no virtue!” we see video from his father’s Facebook page of Taurus punching a man he had badgered and provoked at a pro-Trump election protest organized by the family in Laguna Hills in December.

Updated: July 13, 9:40 p.m. EDT
This article was updated to add information about belligerence by Nick Taurus at protests in Huntington Beach in February and Costa Mesa in May.

Correction: July 17, 6:47 p.m. EDT
An earlier version of this article incorrectly described the man who was knocked down during the disruption of Rep. Katie Porter’s town hall event as a supporter of Nick Taurus. The man, Joe Camera, claims that he was not a supporter of Taurus before the event, although he posed for a photograph with him that day, in which the two men had their arms on each other’s shoulders. According to Camera, the photograph was taken after the event, not before it.