The city has given little room for public input ahead of a vote to approve the $90 million center that activists have dubbed “Cop City.” 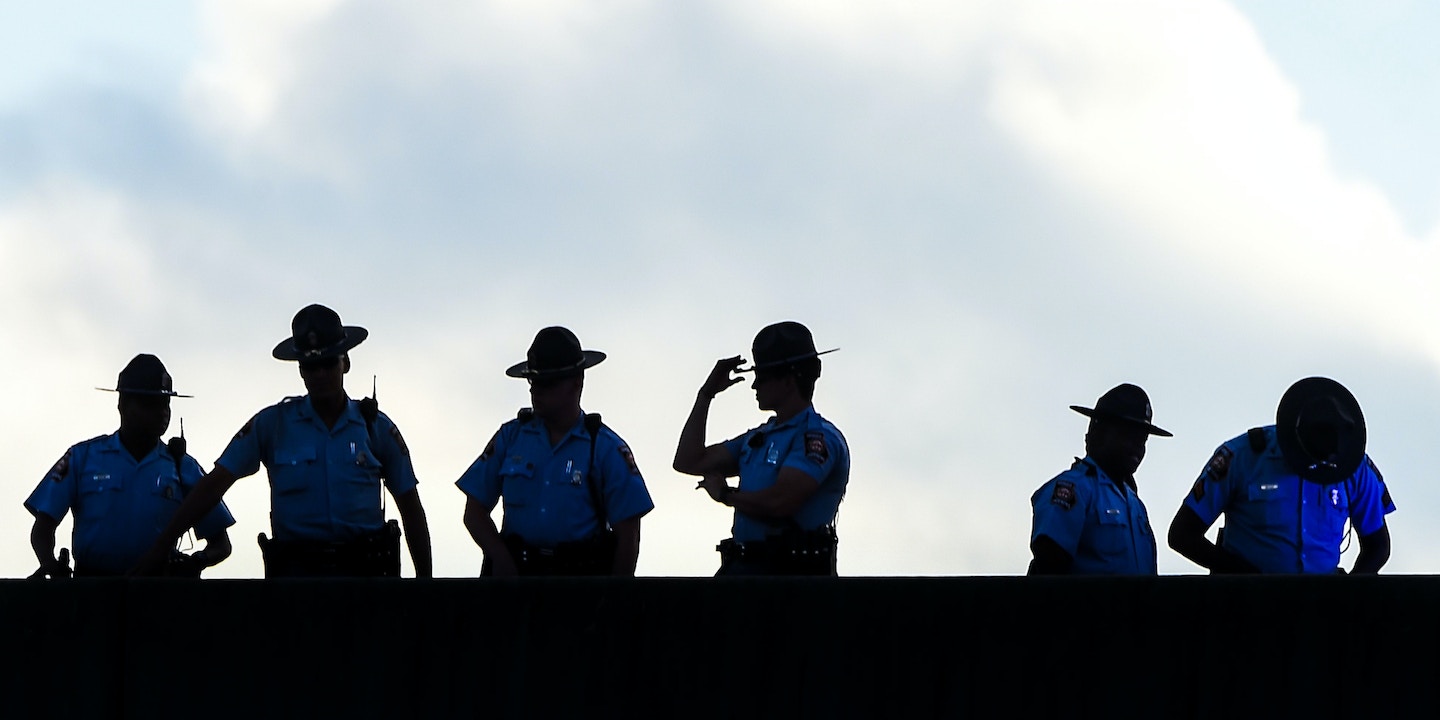 On a recent evening in Atlanta, a group of over 100 residents gathered in the sanctuary of a local church, spaced out and wearing masks to follow pandemic precautions. “We are dealing with a very important issue tonight that the city has not dealt with,” said Kamau Franklin of Community Movement Builders, a local Black-led collective that organizes against gentrification in the city, kicking off a town hall as the setting sun peered in through large pastel, stained-glass windows. “What we have here is a city dedicated to protecting the police while pushing out poor, working-class residents — particularly Black, poor, working-class residents — under the guise it’s helping to protect people.”

For the next two hours, residents and activists took turns commenting on the city’s latest development plans that have caused a stir among locals: a $90 million police training facility in the city’s last large remaining green space known as the Old Atlanta Prison Farm. On June 7, City Council Member Joyce Sheperd introduced legislation that would authorize a ground lease to the Atlanta Police Foundation for the full 381 acres. That ordinance is moving through City Council committees this week and is expected to come up for a vote by the full council next Monday, August 16. So far, only two members of the 16-person council, Antonio Brown and Carla Smith, have publicly said they would vote against approving the project.

In the lead-up to the vote, some Atlanta residents have raised concerns about the proposed training center, which activists have dubbed “Cop City” since APF plans to build a mock city for first responders to train in. Top of mind to the “Stop Cop City” coalition are the potential environmental and public health impacts of building the training center, along with investing so much money in police amid the city’s police brutality issues and housing crisis.

Following last summer’s historic protests against police violence, the city responded by striking down any police reform measures and limiting opportunities for public comment while increasing the police budget and upping citizen surveillance. Atlanta Police have killed at least three people since the demonstrations, most recently in late July, while the long battle to close the city jail appears to have reached another stalemate. In total, the Georgia Bureau of Investigation has been called to investigate 59 officer-involved shootings throughout the state this year; they launched 96 investigations in 2020.

The People’s Town Hall, which was organized by the Atlanta Democratic Socialists of America and was attended by two city council members, came after the city and APF hosted two virtual “public input sessions,” in which police representatives presented a slideshow and responded to questions that had been submitted ahead of time. Residents weren’t given any time to speak and the chat function was disabled, so some people held up written messages to their screens instead.

“Community members did not have a say whatsoever in the creation of the plans or in the selection of the site,” Brad Beadles, a resident of DeKalb County, where the proposed facility will be located, told The Intercept in an email. APF, he added, “saw no need for public input despite the fact that the police deal with the public each and every day as part of their job. When private corporate donors are able to fund militarized training facilities for the police, they are essentially buying off the police. They are making it clear who the police work for.” Top/Left: Police officers brutalize protesters near the CNN Center in Atlanta on May 29, 2020. Bottom/Right: Qri Montague holds a sign while marching, following the guilty verdict in the trial of Derek Chauvin, in Atlanta on April 20, 2021.Photos:Photo: Mike Stewart/AP; Elijah Nouvelage/AFP via Getty Images

The Atlanta Police Foundation is a nonprofit organization that claims to have “united the business and philanthropic community with the Atlanta Police Department.” It is backed by an array of corporate donors, including Delta, Coca-Cola, UPS, and Cox Enterprises, which owns the Atlanta Journal-Constitution. The foundation has proposed funding the training center through a public-private partnership that will leave taxpayers to pay an estimated $30 million, one-third of the estimated cost. Sheperd’s ordinance seeks to lease the land to APF for $10 a year for up to 50 years.

“When private corporate donors are able to fund militarized training facilities for the police, they are essentially buying off the police.”

The renderings of the facility include plans to burn towers, install new firing ranges, launch explosives, and a cop academy APF calls the “Institute of Social Justice.” It will be much larger than facilities used by police departments in other major cities. New York City’s police department, for example, uses a 32-acre training facility in Queens, while the Los Angeles Police Department’s facility sits on 21 acres. The NYPD and LAPD are two of the top three largest police departments in the country, while Atlanta’s ranks 19th.

APF CEO and President Dave Wilkinson has repeatedly touted to council members that 95 percent of Atlantans “overwhelmingly approve this project” but has not produced any evidence for this statistic. Neither Wilkinson nor the APF communications office responded to requests for comment. City Council President Felicia Moore told The Intercept that she had passed questions about public support and other concerns on to APF and had not yet received a response. Other council members either denied comment or did not respond to The Intercept’s inquiries.

Wilkinson has been dismissive of residents’ concerns. In an email to a city council member who had passed along questions from a resident about the deal’s unpopularity among constituents and environmental concerns, Wilkinson accused activists of spreading misinformation to delay the vote. “However, a delay in the vote could be catastrophic as the funding could be withdrawn,” he wrote. “Every CM that I have briefed on the project has committed their support and committed their vote for the project. Therefore, this should be voted thru with no problem.” A man walks across a street painted with “Defund Police” in front of the Atlanta Police Department headquarters in Atlanta on June 10, 2020.

Atlanta, known as a “City in the Forest,” has the greatest amount of tree canopy of all urban areas in the country, which scientists say is the city’s defense against climate change. The police facility would be built in the center of that area, on land that originally belonged to the Muscogee Creek tribe before it was sold in a land lottery and used for chattel slavery and forced imprisoned labor. While APF has said that construction would cause little damage to Intrenchment Creek, independent environmental researchers worry that historic and ongoing munitions testing in the area may have already contaminated soils and waters. Residents have found police grenades, which contain toxic chemicals such as lead, on an old firing range, in the forest, and on the bank of the creek. Environmental and archaeological studies need to be conducted to learn more details about the impacts of the construction and deforestation, said Scott Peterson of Save the Old Atlanta Prison Farm.

Such a study is not a prerequisite for the city approving the lease of the land, though it would be required prior to breaking ground. During a public input session, an APF representative said there was an environmental study in progress but did not provide additional information. Neither the Georgia Environmental Protection Division nor EPA Region 4, which oversees the Southeast region, have begun an assessment, spokespersons for the agencies told The Intercept. Though the project has not yet been officially approved, residents say they have witnessed activity in the area, including what Peterson described as “joyride bulldozing.”

In APF materials that Moore shared with The Intercept, the foundation lists the environmental organization Nature Conservancy as a group it has engaged with to solicit input on the project. In an interview with The Intercept, Deron Davis, the executive director of the Nature Conservancy in Georgia, described the reference to his group as “definitively disingenuous” and said they are “unequivocally opposed” to a facility being built on the Old Atlanta Prison Farm.

During the town hall, to which police officers were dispatched to stake out, Council Member Antonio Brown said that not one of the 12 activist organizations he spoke to “supports this development. That, to me, spoke volumes. We call ourselves a ‘city in a forest,’ but we don’t even protect the forest in our city.”

Kelsea Bond — a lifelong Atlanta resident and core organizer with an Atlanta DSA working group known as Defund APD, Refund Communities — has been canvassing since June in districts near the proposed site, which is city-owned and sits in a predominantly low-income Black neighborhood of unincorporated DeKalb County.

“Nearly no one we’ve talked to is for Cop City,” said Bond. “As of right now, 363 people have signed our petition.” Bond cited various reasons for residents’ opposition, including negative experiences with police and fears of more gentrification in a city that has the country’s worst income inequality.

Residents, they said, seem equally opposed to the destruction of the green space as they were to the “sheer size of the proposed facility.”