Investigators are probing Prince’s involvement in the attempted sale of Jordanian military equipment as part of a 2019 plan to help self-declared Libyan leader Khalifa Hifter. 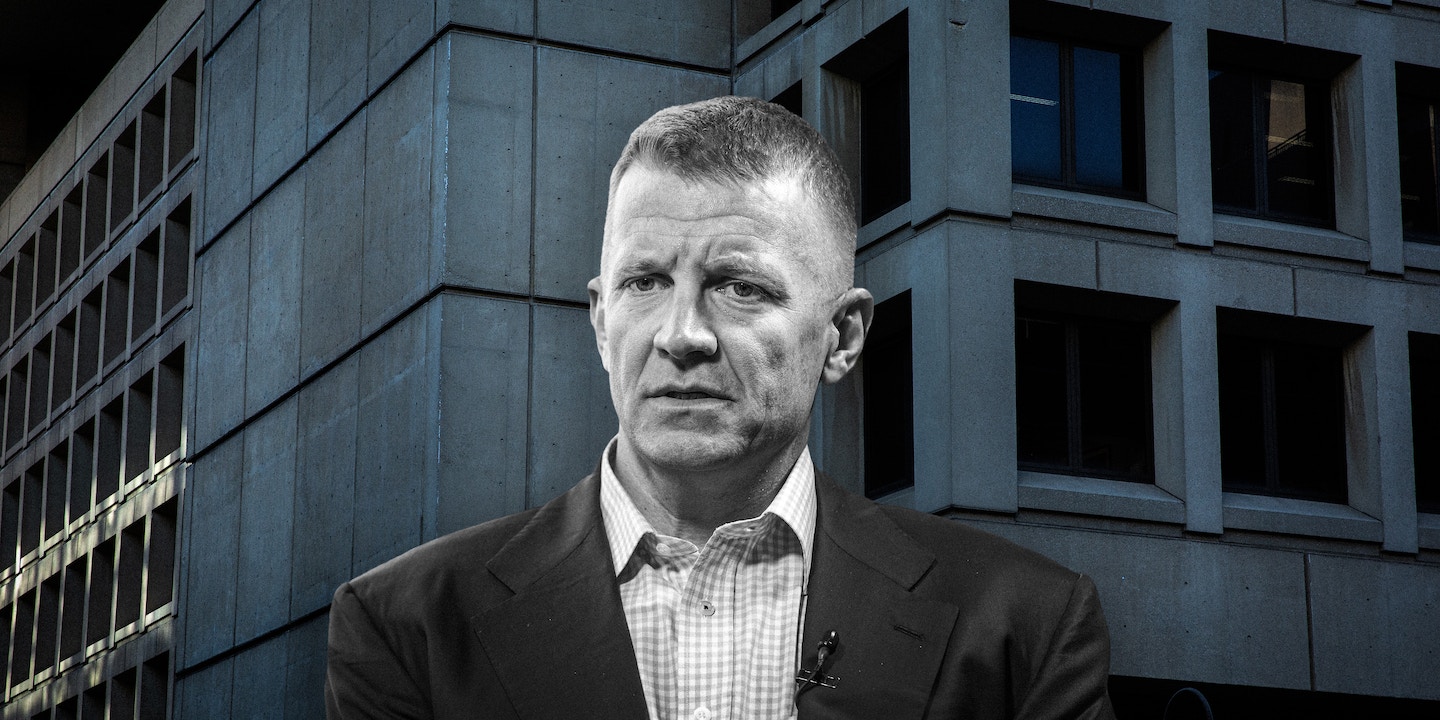 The FBI is investigating a failed 2019 mercenary plot related to the civil war in Libya and has sought to determine what role, if any, private military contractor Erik Prince had in the undertaking, according to six people with knowledge of the investigation. Prince has not been charged with a crime.

Federal investigators last summer began probing Prince’s involvement in the attempted sale of Jordanian military helicopters and arms as part of the 2019 plan to help self-declared Libyan leader Khalifa Hifter overthrow the country’s United Nations-backed government, according to four of the people familiar with the investigation.

In February, a U.N. investigation concluded that Prince and others violated the arms embargo on Libya, detailing parts of the secret effort to provide a team of mercenaries and aircraft for an assassination unit in support of Hifter. Prince has denied any involvement in the undertaking, dubbed Project Opus, and told the New York Times that he had never met or spoken to Hifter.

Matthew Schwartz, a lawyer for Prince, said that his client had nothing to do with the mercenary plot. “As Mr. Prince has said repeatedly, he had absolutely no involvement in any alleged military operation in Libya in 2019, and the report which insinuated otherwise was based on an incomplete investigation and relied on biased sources.”

In particular, FBI agents from the Washington Field Office have inquired into Prince’s role in creating and then trying to market a modified crop duster as a military aircraft for use in conflicts around the world. The airplanes were meant to be used in a larger effort to help the renegade Libyan military commander take control of Libya’s capital, Tripoli.

The Intercept detailed Prince’s repeated efforts to help move aircraft and other materiel from Jordan to Libya, which included arranging meetings with a member of then-President Donald Trump’s National Security Council, but Jordanian government officials stopped the deal. Prince worked with Jordanian royal Feisal ibn al-Hussein to arrange the sale and transfer of weapons, according to three people with knowledge of the arrangement. This summer, FBI agents sought to interview Feisal and several others who work with him, according to two people with knowledge of the FBI’s activities in Jordan. Feisal, through the Jordanian Embassy in Washington, previously denied that he had any involvement in the plot or any relationship with Prince.

The U.N. report traced the rapid sale and transfer of three aircraft owned or controlled by Prince to a close associate for use in the Libya plot. The planes included a modified crop duster Prince created while he was CEO of Frontier Services Group, the Chinese security and logistics company he founded. Only Prince “was in the position to approve the sale and/or transfer of all three aircraft to support the operation in such a short time frame,” according to the U.N. report. The U.N. also traced the planes’ transfer from Prince-controlled companies, including Frontier Services Group, to a mercenary firm based in the United Arab Emirates and connected to Prince. “One quick transfer could be explained,” the U.N. report stated, “but not three from different companies, all under the effective control or influence of one individual.” The U.N. is cooperating with the FBI investigation.

In April, two months after the U.N. documented the change in ownership of the Frontier Services Group planes, FSG announced that Prince had resigned from the company “due to his other business arrangements.” Schwartz, Prince’s attorney, said in an email that his client resigned over “disagreements with the management performance and direction of the company. Any suggestion that his resignation had anything to do with the UN Panel’s report is false.”

After the plan to transfer the aircraft to Libya and the larger mercenary effort fell apart, one of the planes was moved to Cyprus. Earlier this month, FBI agents traveled to the Mediterranean island to inspect a modified American-manufactured crop duster, according to a person with knowledge of the probe. The FBI inspection of the aircraft was previously reported by Kathimerini, a Cyprus-based news organization. The Intercept had earlier reported on Prince’s secret effort to develop crop dusters into military aircraft and market them for use in multiple wars.

Prince, the founder of Blackwater, is the brother of Trump Education Secretary Betsy DeVos and was one of the former president’s most ardent supporters. The scion of a wealthy and politically connected family, Prince has courted controversy since the war in Iraq, when Blackwater won major contracts to support the U.S. occupation. Blackwater was banned from Iraq in 2007 following the Nisour Square massacre, in which its contractors killed 17 Iraqis and wounded 20 more. Prince later sold Blackwater and moved to the UAE, where he built a secret mercenary force for the de facto ruler of the federation of seven Arab Gulf states, Mohammed bin Zayed, known as MBZ. A man rides a bicycle past the site of the Nisour Square massacre by Blackwater private contractors in Baghdad, Iraq, on Sept. 20, 2007.

During the Trump administration, Prince lobbied the White House to privatize the Afghanistan War as well as to create a secret intelligence unit for the president. Both proposals were rejected. Prince has denied that he advised the White House, but three people familiar with his role said that in recent years, Prince worked closely with Trump’s son-in-law Jared Kushner and MBZ, as the two negotiated policies in the Middle East and Africa. Kushner has denied working with Prince.

The FBI has been scrutinizing Prince’s global network of businesses and operations since at least 2020, according to three of the people familiar with the probe. During the Trump presidency, FBI agents sought witnesses and documents to help them understand Prince’s role in the Libya arms deal involving surplus military aircraft and weapons from the Jordanian military, according to the three sources with knowledge of the investigation.

More recently, the FBI sought permission from the British government to interview a U.K. army general who, while working as an adviser to Jordan’s king, investigated and ultimately helped stop the weapons sale and shipments to Libya, according to one of the people familiar with the FBI investigation. It is unclear if the U.K. approved the request or if the FBI has conducted the interview. The role of the British general, Alex MacIntosh, was disclosed by The Intercept in February.

“The Ministry of Defence cooperates fully with law enforcement bodies when engaged by them,” a spokesperson for the ministry told The Intercept via email. “Brigadier Macintosh is a respected British Army officer who served with distinction alongside the Jordanian Armed Forces during his time in post.”

The latest FBI inquiry is one of several government probes into Prince since his days running Blackwater. As part of his sale of that company, Prince negotiated a deferred prosecution agreement over weapons and export violations Blackwater committed while Prince was the sole executive overseeing the company. Blackwater paid nearly $50 million to settle charges as part of the agreement, but Prince was never personally charged with a crime.

After Prince established his Chinese company, FSG, the FBI investigated multiple mercenary proposals to countries in Africa and the Middle East. In 2015, the FBI opened a counterintelligence investigation after Prince met with the Chinese intelligence service in an effort to open a bank account in China. That same year, after Prince secretly modified the two Thrush crop dusters and tried to sell them, American executives of FSG reported the possible export violation to the Justice Department.

During Trump’s first year in office, Prince again faced federal scrutiny, this time from special counsel Robert Mueller, who sought to understand Prince’s role at a January 2017 meeting in the Seychelles with a Russian banker and top Kremlin emissary. The meeting, which was arranged by an aide to MBZ, included discussions around Prince’s mercenary business ambitions in Libya and the Middle East, according to FBI documents. Prince also testified under oath to a congressional committee about the Seychelles meeting. FBI interview notes of Prince and MBZ’s aide show that Prince used his trip to try to pitch the UAE crown prince on both his mercenary ambitions in Libya and the use of his modified crop dusters as military aircraft.

After the Mueller report was released in 2019, both the House and Senate intelligence committees referred Prince for charges for possible false or misleading testimony in connection with their investigations into Russian interference in the 2016 presidential election. None of the federal investigations has resulted in charges.