The Turkish Democracy Project, a political advocacy group launched this summer with the stated goal of promoting democracy in Turkey, has the surprising characteristic of having no Turkish members on its leadership board. In a press release announcing its creation, the organization said that it was “committed to encouraging Turkey to adopt more democratic policies.” The two Turkish people publicly involved with the project — former Turkish politician Aykan Erdemir and academic Suleyman Ozeren — were removed from its website’s list of advisory council members not long after its launch.

The Turkish Democracy Project boasts a roster heavy with hawkish former U.S. public officials and diplomats with close ties to Israel and the Gulf Arab states.

Under its heavy-handed ruling AK Party, democracy in Turkey has faced serious setbacks in recent years, but what the Turkish Democracy Project specifically does to address that problem is unclear. The organization does, however, have links to a network of well-funded dark-money groups promoting U.S. foreign policy positions in the Middle East that dovetail with Saudi, Emirati, and Israeli security interests.

At the center of it all is Mark Wallace, a former George W. Bush administration ambassador to the United Nations. Wallace is presently the head not just of the Turkish Democracy Project, but also the anti-Iran organization United Against Nuclear Iran, or UANI; the counterterrorism advocacy group Counter Extremism Project, or CEP; and even an arts-based nonprofit focused on human rights in Iran called PaykanArtCar. Eight out of 11 of the Turkish Democracy Project’s senior leadership and advisory board members hold positions with UANI, CEP, or both.

UANI and CEP have had questions raised about their aims and sources of funding, including whether they receive financial support from foreign governments and political figures. The Turkish Democracy Project did not respond to a request for comment about its own funding and sources of support.

The Turkish Democracy Project has yet to publicly file information about its funding. But the closely linked organizations UANI and CEP both fall under an umbrella organization known as Counter Extremism Project United. While never disclosing any of its funding sources, this network of organizations brought in over $101 million between 2009 and 2019, according to a review of tax filings, making it one of the biggest dark-money U.S. foreign policy pressure networks in operation today.

A July 2021 article on the corporate and government news site Intelligence Online about the creation of the Turkish Democracy Project noted Wallace’s extensive ties with Thomas Kaplan, a billionaire investor who is known to be a funder and vocal supporter of Wallace’s Iran-related advocacy groups.

Kaplan also employs Wallace as a senior adviser at his Electrum Group, a firm that invests in “public equities in the metals and mining sector” — commodities that both Kaplan and Wallace have marketed to investors as retaining or appreciating in value if there is political instability in the Middle East.

The article in Intelligence Online also referred to Kaplan’s extensive ties to Gulf Arab royals, something he has referred to enthusiastically in past public appearances. In particular, Kaplan maintains extensive business and philanthropic ties to the United Arab Emirates.

Efforts to examine the finances behind the web of Kaplan-linked foreign policy pressure groups have found an unusual obstacle: the U.S. government, which quashed a 2013 lawsuit against Kaplan and UANI. The suit claimed that Kaplan and UANI were financed by undisclosed foreign interests. The government, in an unusual invocation of state secrets as a third-party intervenor in a civil suit, cryptically claimed that permitting the case to move forward would jeopardize U.S. national security.

Despite the availability of public filings providing total figures about the funding of this network of Wallace-led organizations, specific information about donors remains opaque. There have been periodic clues, however, pointing to a generous role for Kaplan in bankrolling these activities. UANI donor rolls published in 2015 on the investigative news site LobeLog revealed that trusts controlled by Kaplan contributed $843,000 to UANI in 2013, accounting for roughly half of the organization’s revenue that year. 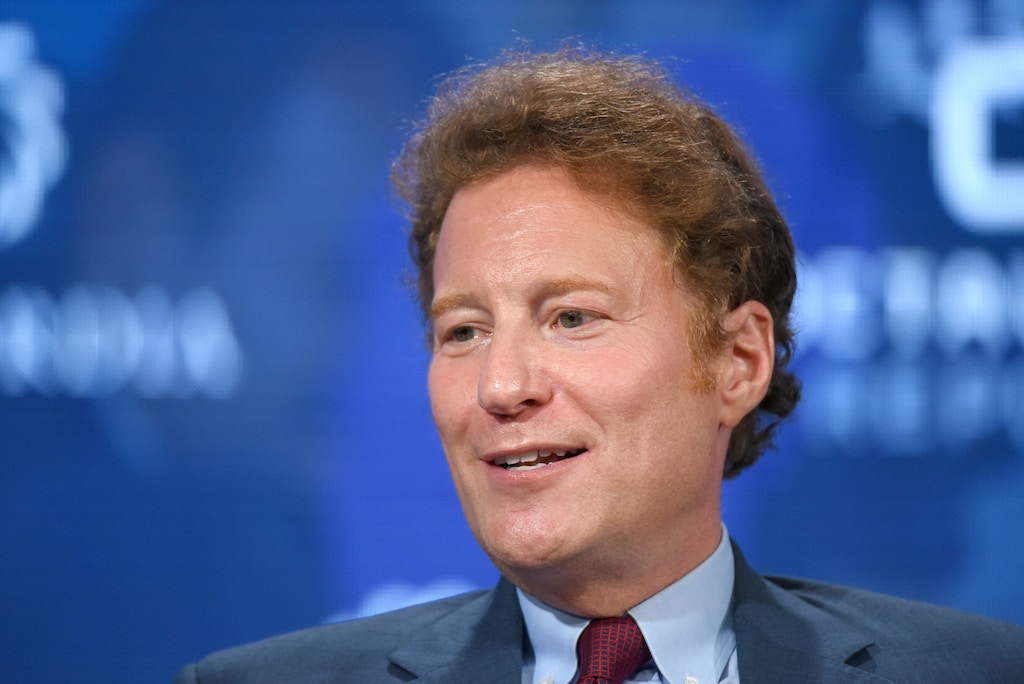 In 2015, Wallace filed a “truth in testimony” disclosure with the House Foreign Affairs Committee before serving as a witness in his capacity as head of the Counter Extremism Project. Wallace wrote: “We have only received to date individual and private contributions. CEP has received no monies from foreign governments. We have discussed funding of CEP with both the U.S. government (Dept. of State) and various foreign governments in the future.”

A trove of leaked emails released several years ago — believed to be from the account of UAE Ambassador to the U.S. Yousef al Otaiba — appeared to show the network’s pursuit of foreign funding, particularly from the UAE and Saudi Arabia. An email from Wallace to Otaiba from September 3, 2014, referenced “cost estimates” for an upcoming “forum,” though it was unclear the event being referenced was a UANI event or the launch of CEP, which took place later that month.

Another leaked email exchange from January 2015 mentioned UAE support for CEP, with Townsend soliciting Otaiba’s assistance in arranging meetings with Mohammed bin Zayed, the crown prince of Abu Dhabi. Townsend concluded her email by thanking Otaiba for his “support of the CEP effort!”

Again in August 2016, former Republican Sen. Norm Coleman, now a Saudi lobbyist, wrote to Otaiba at the direction of Saudi Foreign Minister Adel bin Ahmed Al-Jubeir to provide CEP’s tax status. As Coleman wrote to the UAE ambassador: “Foreign Minister Al Jubeir recommended that I follow up with you on the attached matter. The Counter Extremism Project is a 501c4. Let me know if you have any questions.”

“You can do all these types of work if you’re a U.S. citizen and funded by U.S. citizens, but FARA comes into play if you’re funded or taking actions at the behest of a foreign government or entity.”

If CEP and UANI receive foreign funding, their activities may require registration under the Foreign Agents Registration Act, or FARA, a law requiring registration for entities within the United States engaging in “political activities.”

None of the groups have registered under FARA, though, despite the suggestions, no hard evidence has emerged of foreign funding.

“These groups all engage in activities that would qualify under FARA’s definition of political activities,” Ben Freeman, director of the Foreign Influence Transparency Initiative at the Center for International Policy, said of UANI, CEP, and the Turkish Democracy Project. “They have very explicit aims related to U.S. foreign policy, and they are actively trying to influence sections of the public — and in some cases policymakers themselves — towards these policy objectives.”

“You can do all these types of work if you’re a U.S. citizen and funded by U.S. citizens, but FARA comes into play if you’re funded or taking actions at the behest of a foreign government or entity,” Freeman added.

The launch of the Turkish Democracy Project this summer predictably infuriated pro-government media in Turkey, which have characterized the organization as part of a plot by an array of the country’s enemies to undermine its stability.

Over the past decade, Turkey has been locked in an internal struggle between supporters of the ruling AK Party and the Gülen Movement, a banned political network that Turkish President Tayyip Erdogan accuses of masterminding a 2016 coup attempt. Turkey also has had hostile ties in recent years with Gulf Arab nations like the UAE and Saudi Arabia, as well as Israel.

For their part, Wallace and Kaplan remain at the center of a growing network of well-funded organizations whose foreign policy objectives coincide with the stated security interests of governments in Abu Dhabi and Tel Aviv. Despite the high-minded words contained in its mission statements, observers said that the launch of the Turkish Democracy Project seems to be more about furthering the interests of Turkey’s regional rivals than defending liberal democracy.

Sarah Leah Whitson, the executive director of Democracy for the Arab World Now, also known as DAWN, a Middle East-focused, Washington-based think tank created in the aftermath of the murder of Jamal Khashoggi, said that the background of those behind the organization points to a political purpose rather than a humanitarian one.

“To target a flawed democracy in the Middle East,” Whitson said, “while its board members defend and promote the absolute monarchies of Saudi Arabia and the United Arab Emirates, the apartheid state of Israel, and the dictatorship in Egypt suggests that this group’s focus is political rather than based on values.”