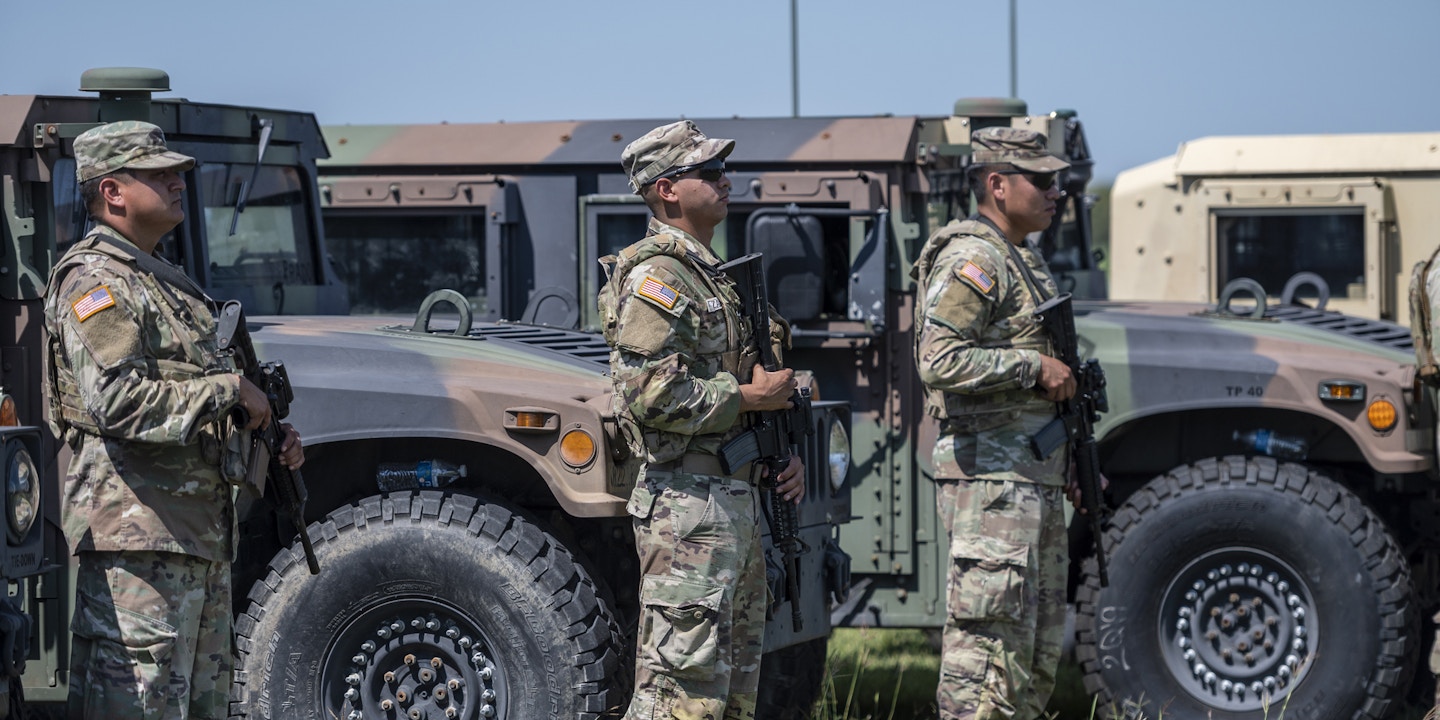 It was early November when Marianna Treviño Wright saw a convoy of National Guard members in Humvees speed past the National Butterfly Center in Mission, Texas. Shortly thereafter, Treviño Wright, the center’s director, began to see soldiers with assault rifles patrolling nearby and along the banks of the Rio Grande.

“They have this aggressive posture with the rifles across their chests,” Treviño Wright said. “We cruise the river four or five times a week on our boat and have not seen anything that would indicate an increase in [migrant] traffic or any sort of increased threat. … So the question is, What are they doing here?”

On Monday, a wildlife camera recorded three armed soldiers on a private road inside the butterfly center, which alarmed Treviño Wright and other employees. The privately owned nonprofit nature preserve hosts several thousand schoolchildren and visitors every year to experience the flora and fauna, which includes several hundred species of butterflies.

“I worry that these young, deployed soldiers, who find themselves in a situation that is not their home and their heads filled with Lord only knows what, could act impulsively or recklessly or even accidentally with tragic consequences,” she said. National Guard members captured by a wildlife camera at the National Butterfly Center in Mission, Texas, on Dec. 13, 2021.

Rick Perry, who was Texas governor from 2000 to 2015, also deployed the state National Guard to the border to assist Border Patrol in surveillance and other support functions. But Abbott is the first Texas governor to send armed soldiers to arrest migrants as quasi-immigration officers.

Over the summer, soldiers and state police from the Texas Department of Public Safety, or DPS, began arresting migrants for criminal trespassing in Val Verde County and neighboring Kinney County. Instead of being turned over to Border Patrol, some are being charged with state misdemeanors and prosecuted by Texas counties.

Since much of the Texas border is privately owned, DPS has sent teams to ask landowners to sign agreements allowing them access to their land. The landowner is then listed as the “complainant” on the trespassing charges against migrants. DPS said it plans to extend these arrests to other counties but has yet to expand the initiative.

Treviño Wright said the butterfly center, which is in Hidalgo County, has not signed an agreement allowing soldiers or DPS officers to patrol the center’s land. After discovering that someone had cut through the center’s barbed wire fence, Treviño Wright placed wildlife cameras at the location. Soon after, the center recorded footage of a soldier with a rifle appearing to examine the spot where Treviño Wright said the fence had been cut. Since then, she’s recorded footage of soldiers at the center several times, despite the “No Trespassing” signs posted.

At press events, Abbott has said the flooding of border communities with police and military is necessary due to “the Biden administration’s open-border policies.” But Biden continues to enforce Title 42, an obscure public health regulation the Trump administration invoked to bar asylum-seekers from crossing during the pandemic. And this month, the Trump era’s “Remain in Mexico” program, which forces asylum-seekers to wait in Mexico for their U.S. immigration court dates, was reinstated due to a federal court order.

In September, thousands of Haitian asylum-seekers arrived at the port of entry in Del Rio, Texas; two months later, Abbott announced further militarization of the border. The state launched Operation Steel Curtain to “surge personnel, equipment, and capabilities to anywhere in the state of Texas … so we can repel and block any large caravans and illegal activity coming across,” according to Maj. Mike Perry, the National Guard’s border public affairs officer. Perry said in a November press briefing that DPS and the National Guard were training at the port of entry in Eagle Pass, bringing in Black Hawk and Chinook helicopters and military police with “a contingency reaction force that have non-lethal force and riot gear.”

The Intercept and Type Investigations asked Abbott’s office whether a new threat had been determined that required soldiers to patrol with assault rifles in border communities. A spokesperson for the governor directed questions to the Texas Military Department, which oversees the National Guard. “There’s no new threat on the OLS mission,” a spokesperson for the military department wrote in an email. “Abbott has the authority to arm us at any time should the situation arise.”

When asked about the protocol that soldiers follow for use of lethal force, the spokesperson wrote, “Rules for self-defense are in place … all service members receive training on these rules prior to their deployment on the mission.” The spokesperson said that they could not release detailed information about the rules, however, because “it could endanger our service members and law enforcement officials on the border.” 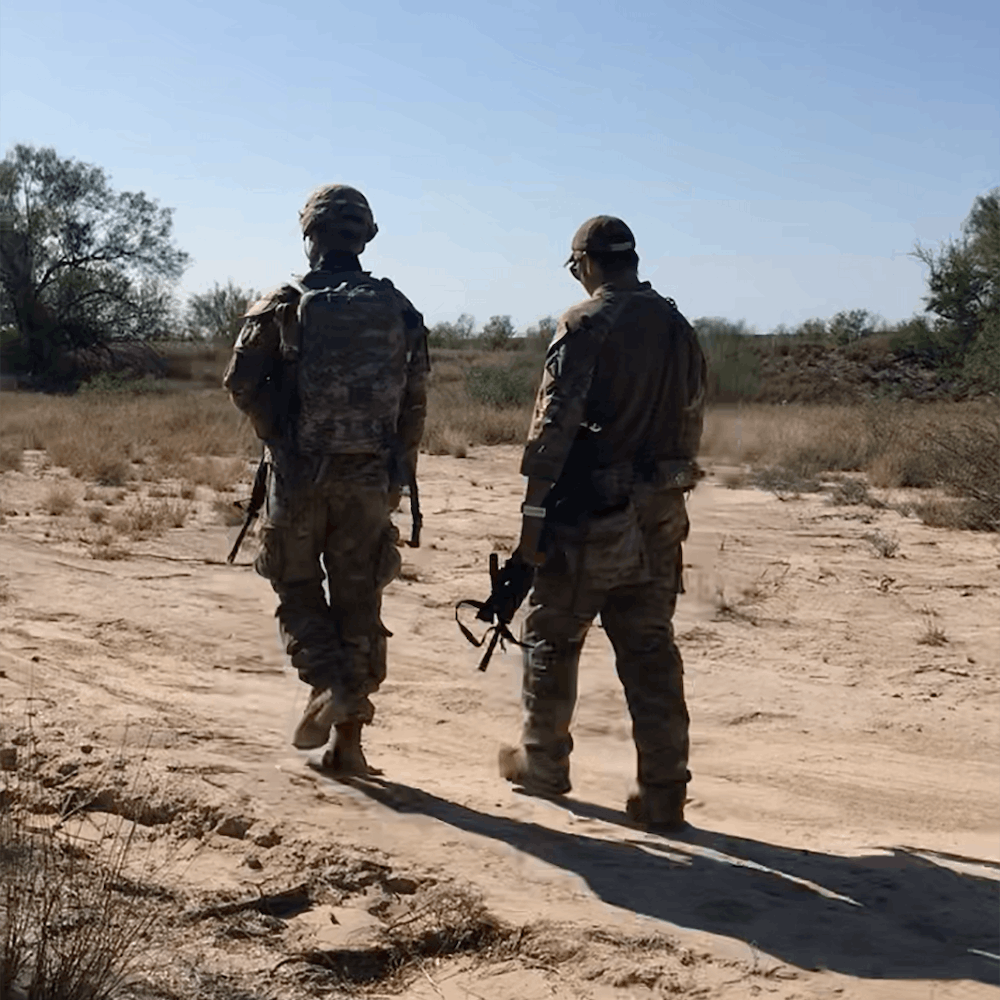 A video Elsa Hull recorded on her phone on Dec. 12, 2021, outside her home in Zapata County, Texas.

Treviño Wright is not the only Texan noticing the change. Last Sunday, Elsa Hull, who lives near the Rio Grande in Zapata County, was startled by two armed men in uniform who she says followed her as she walked home from the river. In the encounter, which she filmed on her phone, the two men said they were just checking on her after reports that an individual had come up from the river.

“It just totally freaked me out,” Hull said. “I mean, who are these guys? And what are they doing at my gate? They didn’t have any patches or anything identifying them. One of them was wearing a helmet. Is he expecting bombs to drop from the sky?”

The Intercept and Type Investigations sent Hull’s video and footage from the butterfly center to the Texas Military Department, asking why armed soldiers were on private property and what precautions they’d take in a public setting with schoolchildren and visitors present. We also asked them to confirm that the two men who approached Hull were National Guard members.

The spokesperson responded, “The Texas Military Department has used federal property co-located near the National Butterfly Center while working in support of missions along the Texas-Mexico border. Our service members are under strict guidance to remain on federal property while working in this area.” The spokesperson did not confirm whether the men in Hull’s video were part of the National Guard or explain the presence of soldiers at the privately owned nature preserve.

Treviño Wright and Hull are especially concerned about the lack of information around the protocol governing soldiers patrolling communities and their reasons for being armed. There has been little detail from state officials outside of information they provided to the Center for Immigration Studies — designated an anti-immigrant hate group by the Southern Poverty Law Center — for an article the group published in late October.

“Give me a break. This is all fabricated by Abbott for personal and political gain.”

DPS Director Steve McCraw explained to CIS that soldiers would receive 40 hours of police training in Fourth Amendment rights and use of deadly force. The training was being given by DPS officers at military bases and in the field along the border, officials said. “Under the new initiative,” according to CIS, “soldiers who have undergone the deadly force training will be fully armed and, while trained to understand restrictions on use of force, will be authorized to use it if directly threatened.” The soldiers will not be allowed to pursue fleeing suspects in vehicles, according to the article.

Some Texas Democrats, including Rep. Joaquin Castro, have asked Homeland Security Secretary Alejandro Mayorkas and Attorney General Merrick Garland to investigate Operation Lone Star. “Abbott’s continued misuse of the Texas National Guard has led to an excessive militarization of our border communities,” Castro told The Intercept and Type in an email. “It’s unwarranted, can lead to real consequences and trauma, and is a dangerous way for the governor to try and score political points.”

In a letter sent to Mayorkas and Garland, Castro and several other Democratic members of Congress said Operation Lone Star establishes “a separate state immigration policy … which is wreaking havoc on Texas’s judicial system.” Flooding the border with military and state police has “continued to militarize Texas’s border communities and interfered with the federal immigration system,” the letter went on. “Even more egregiously, these programs have directly led to a violation of state laws and constitutional due process rights.”

Border Patrol Chief Raul Ortiz also voiced concerns about the state’s operation in an interview with Texas Monthly. “I really would prefer to see border security left to the border-security experts,” he said. “I want other agencies’ help; I certainly need it at this time, but coordination has to happen.”

Treviño Wright said she’s more concerned about the conduct of armed soldiers and police in her community than she is about any migrant caravans. “We were just voted one of the best botanical gardens in the state and now we’re crawling with National Guard soldiers,” she said. “Give me a break. This is all fabricated by Abbott for personal and political gain.”

Hull said she’s afraid for her family after coming across the armed soldiers near her home. “I’ve lived here for 20 years,” she said. “And I’ve never had any problems with people crossing, breaking in, or vandalizing anything. This is a peaceful area. But now I’m worried. I don’t want to get shot. I don’t want my kids to get shot. This is just a tragedy waiting to happen.”