The government wants to keep juries from seeing gruesome evidence of animals in distress — the very reason activists are going into farms. 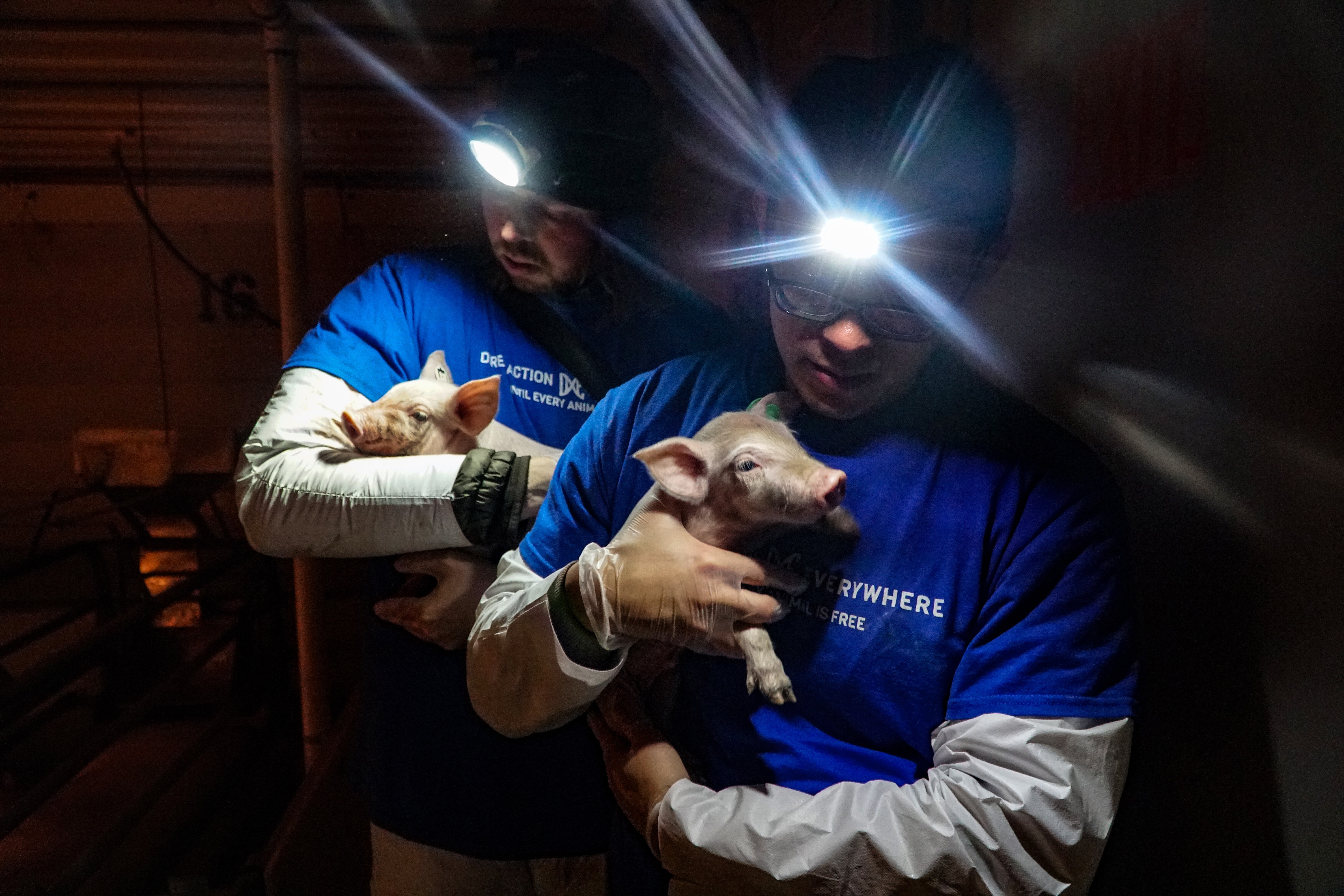 Wayne Hsiung, right, and Andrew Sharo of Direct Action Everywhere hold piglets during a filmed rescue of animals at Circle 4, a Smithfield Foods facility in Utah, in early 2017.

In criminal trials, judges routinely rule that certain evidence or testimony does not get presented to the jury. By and large, these rulings to exclude evidence benefit the defendant: Gruesome images of a murder victim, for example, are regularly kept out of the courtroom to mitigate unfair prejudice against the accused.

In a recent uptick of cases against animal rights activists, who face hefty charges for removing ailing animals from farms, the typical logic behind keeping evidence from a jury is flipped on its head. The prosecutors, rather than defendants, have sought — often successfully — to suppress all mention during trial of animal cruelty even though it is the very issue that should be at the core of these cases.

Next month, a Utah judge will hear pretrial motions on the exclusion of evidence in a case against two members of the animal liberation group Direct Action Everywhere, or DxE. The activists face charges of burglary and theft for removing two suffering piglets from a hog farm in 2017, for which they could be sentenced to more than a decade in prison. The Utah attorney general is seeking to exclude all evidence and testimony relating to the torturous treatment of animals, including a horrifying video filmed by the activists as they removed the pigs.

If the attorney general is successful, the ruling will kneecap the activists’ ability to robustly defend themselves and further entrench the failure of our current legal system to place the interests of nonhuman life and defendants’ rights over those of major agricultural businesses.

“I believe this is a highly unethical and unconstitutional practice. It gags activists and prevents them from telling a coherent narrative to a jury,” Jon Frohnmayer, a DxE activist and attorney, told me. “More troubling, it forestalls the analysis of animal cruelty evidence in a courtroom, which is precisely the forum where such evidence should be analyzed. It is, in short, institutional animal abuse by the very institution that should be protecting animals.”

U.S. courts have a perturbing history of excluding evidence of violence against animals in animal liberation cases. Without this essential context, the prosecution has framed defendants as senseless vandals, thieves, and even terrorists.

In the notorious mid-2000s federal case against Stop Huntingdon Animal Cruelty activists, the SHAC 7, as they are known, were sentenced on federal terror charges for what should have been First Amendment-protected activity. During the trial, the SHAC activists were not allowed to even mention the horrifying treatment of animals at the Huntingdon Life Sciences testing laboratories.

Last year I wrote about the felony charges brought against Wayne Hsiung, a co-founder of DxE, in North Carolina for rescuing a sick baby goat. Hsiung, who is also a co-defendant in the upcoming Utah trial, was convicted of larceny and breaking and entering. The prosecution successfully excluded evidence of animal cruelty related to a baby goat that Hsiung had previously removed from the same farm — evidence that would have spoken to Hsiung’s state of mind in his belief that the farm mistreated its animals.

The aggressive prosecutorial tactics are the legacy of the so-called Green Scare of the 1990s and 2000s, when the government targeted nonviolent animal rights activists as “eco-terrorists” in service of corporate agricultural and pharmaceutical interests.

At the height of the Green Scare, the Justice Department named environmental and animal rights “terrorists” as its greatest domestic terror concern, even though no humans or animals were ever killed by these movements. While animal liberationists may no longer be the state’s primary focus for paranoid repression, the more recent cases make clear that the Green Scare remains an open chapter in U.S. history.

The Utah attorney general’s motions to exclude evidence show how the letter of the law can sit at odds with its purported spirit. The defendants in the case, alongside other DxE members, carried out an “open rescue” — a tactic by which activists publicly rescue animals from factory farms and bring them to animal shelters. The motive to rescue animals, the attorney general argues, is “not a legally cognizable defense to either burglary, theft or pattern of unlawful activity.”

However, a so-called necessity defense, which could, for example, provide legal justification for a person to break into a stranger’s car to save a suffocating dog, could apply to open rescue cases. Without evidence of animal cruelty on the table, though, necessity defenses are stymied from the jump. Likewise, animal liberation activists aren’t given the opportunity to make arguments before a jury that might shift existing precedents around animals’ legal standing and rights.

“Courtroom gags on discussing violence against animals are part of the broader, perverse treatment of animals under the law,” Lauren Gazzola, a former SHAC activist who served 40 months in federal prison, told me. “Legally, animals are property. They are raw material to be turned into food or clothing or used as test tubes.”

The attorney general’s motions rely largely on case precedents in which defendants have successfully excluded evidence. One of the few examples cited in which the prosecution has had evidence excluded involves a Utah rule designed to protect victims and survivors of sexual assault, commonly known as a rape shield law. “There is significant precedent for excluding evidence which could confuse the issues by smearing the victim, as is the case here,” the attorney general wrote, quite literally comparing a powerful agricultural corporation — “the victim” — to a person who has been sexually assaulted.

The purpose of this rule of evidence, Bonnie Klapper, a former federal prosecutor who now assists animal rights activists as a criminal defense attorney, told me, “is to protect sexual assault victims from being further victimized in court. It was never meant to prevent the disclosure of evidence relating to animal cruelty.” She noted the irony of the prosecutor using a rape shield law to protect the reputation of the hog farm’s owner, the industrial meat giant Smithfield Foods, which engages in mass and repeated forced insemination of mother pigs and castration of male piglets without anesthesia.

“Under the law, animals are always anything and everything but what they actually are: sentient and often cognitively complex individuals with lives worth living.”

There’s irony, too, in the government seeking to exclude video evidence that shows a full and total account of the alleged crimes. The activists filmed themselves entering the pork facility; they turned the camera onto the pigs — mother pigs with bloody nipples, pigs with huge open sores, dead and dying piglets on the floor — and filmed themselves removing the piglets. The prosecution argues that, if presented in court, the activists’ commentary on the grim factory conditions and any mention of the company’s mistreatment of its animals would be unfairly prejudicial. That a prosecutor would move to preclude real-time footage of the alleged crime speaks to a frantic desire to foreclose any reckoning with the case’s crucial context.

“A crime so heinous a jury cannot possibly be permitted to see it… for fear it will cause them to decide it’s not a crime at all!” DxE member Matt Johnson told me by Twitter direct message. Johnson had faced charges in Iowa under the state’s so-called ag-gag laws, which criminalize filming inside an agricultural or industrial operation without permission. (Johnson recorded and released video of Iowa Select Farms mass-slaughtering pigs by shutting down ventilation in barns and letting them, in essence, be boiled to death from the inside out.)

Prosecutors in the case had also fought to exclude animal cruelty evidence, but Johnson’s charges were dropped last week, just days before trial was set to begin. Iowa Select Farms had reportedly asked that the case be dismissed after Johnson subpoenaed executives and employees to testify.

The government and industry would seemingly sooner drop a case than allow damning testimony to be aired in a courtroom and potentially shift legal precedents around the animal produce industry — not to mention the larger narrative around what the industry does.

The very reason animal liberationists take the risks they do is to shift legal and social paradigms around the treatment of nonhuman life; the courtroom would be a key stage for this struggle but for the state’s silencing prosecutorial tactics. As Gazzola, the former SHAC activist, said, “Under the law, animals are always anything and everything but what they actually are: sentient and often cognitively complex individuals with lives worth living.”