The level of PFOA in the blood of Merrimack residents was almost three times the 2015-2016 national average. 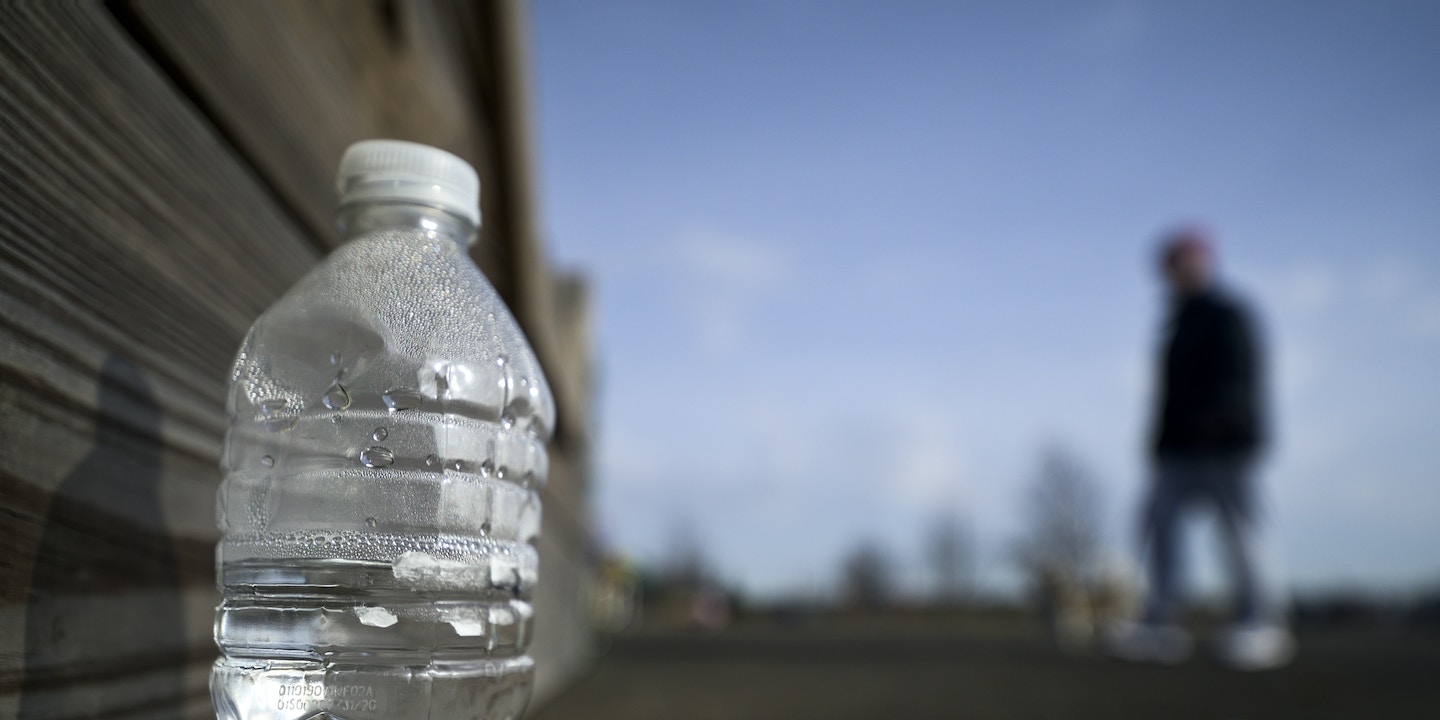 People living in Merrimack, in southern New Hampshire, had rates of thyroid cancer that were higher than the national average between 2005 and 2014. The authors also found that Merrimack residents had higher rates of thyroid, colon, and prostate cancer, when compared to several nearby towns that did not have high levels of PFAS contamination, as well as a higher risk of all cancers when compared to the relatively unexposed communities.

Merrimack is home to a Saint-Gobain factory that produces PFAS-lined glass and fabrics. Previously, the factory had been operated by the chemical company ChemFab, which Saint-Gobain acquired in 2000.

In 2016, two of Merrimack’s public drinking water wells were found to contain the toxic compound PFOA, a type of PFAS, in amounts above the Environmental Protection Agency’s 70 parts per trillion safety threshold. In 2019, the agency found 190 PFAS compounds in the air emissions coming out of the plant’s stack, most of which had never been identified before.

According to the new paper, the level of PFOA in the blood of Merrimack residents was almost three times the 2015-2016 national average — and higher for people who drank more water.

The EPA has recently taken several steps to limit exposure to PFOA, which has been shown to cause kidney cancer and other health problems, but the vast majority of PFAS compounds remain unregulated.

Nancy Murphy, a retired nurse who lives in Merrimack and whose family drank PFAS-contaminated water for years, has been asking for research on the health effects of the PFOA pollution since it was discovered in 2016. Murphy’s 36-year-old daughter is sick with a number of conditions, including hypothyroidism and polycystic ovarian syndrome, both of which have been linked to PFAS exposure. Her 32-year-old son, who runs marathons, has elevated cholesterol, which is also linked to PFAS, and her youngest son also has a serious thyroid condition. Both Murphy’s husband and brother-in-law, who also lived in Merrimack, have developed prostate cancer, which has also been linked to PFOA exposure — as did her father, who also had kidney cancer.

“Can I say that PFAS definitely caused these things? I certainly can’t,” said Murphy. “But, man, there’s an awful lot of things that make me wonder.”

Murphy, who helped found a local advocacy group to fight the pollution and now serves on the Merrimack town council, has spent years asking for more research on how the chemicals have affected her town. “The pushback was unbelievable,” said Murphy. “It was, ‘Oh, you’re fearmongers,’ or ‘You’re going to ruin the property values.’”

In contrast to the new findings, a 2018 cancer incidence report from the New Hampshire Department of Health and Human Service that compared Merrimack’s cancer rates to those of the state found that “none of the cancers in Merrimack, NH, occurred in significantly higher numbers than would be expected.” In December, the state released an updated report that found that the number of kidney cancers between 2009 and 2018 in Merrimack is higher than would be expected “in a town of similar size in New Hampshire” but warned there was insufficient evidence to link the cancers to any exposure.

“It shows how important picking a comparison group is,” toxicologist Linda Birnbaum said of the Environmental Health Insights study. “If you say, we’re going to pick another economically and socially matched community, well, that all sounds great. But if they’ve got the same exposures you do, you’re not going to be measuring anything.” Birnbaum, who retired as director of the National Institute for Environmental Health Sciences in 2019, has studied the toxicity of PFAS chemicals extensively and has noted that the EPA’s safety threshold for PFOA in drinking water did not reflect the evidence that extremely low levels of the chemical can cause cancer.

Mindi Messmer, who was serving in the New Hampshire state legislature when the state’s first study of cancer rates in Merrimack came out, had similar thoughts about the health department’s decision to compare Merrimack’s cancer rates with those of the entire state. “We suspected that using that as comparator group wasn’t really appropriate,” said Messmer. “The cancer rates of the state are really driven by the high population centers in southern New Hampshire, which also happen to be highly exposed to PFAS.” Indeed, PFAS contamination has been measured in a 65-square mile area around the Merrimack plant.

In 2020, Messmer and several health researchers decided to embark on a study that would compare the town’s cancer rates to those of the nation, as well as to those of comparable towns in New Hampshire, Vermont, and Maine that do not have notable PFAS contamination. The study also compares Merrimack’s cancer rates with those of Bennington, Vermont — another town where considerable levels of PFAS have been measured in drinking water.

In addition to identifying relatively high local rates of prostate and thyroid cancers, which researchers have previously linked to PFAS, their study also found elevated levels of bladder cancer, colon cancer, esophageal cancer, and mesothelioma, which are not known to be caused by the chemicals. Messmer said she did not know why those cancer rates were higher but added that the elevated bladder cancer numbers may reflect local arsenic contamination, which is naturally occurring in the area.

“I suspect that there’s a confluence of mixtures of chemicals and naturally occurring contaminants that are causing these high rates of cancers,” said Messmer, adding that the findings show the need for more research.

Birnbaum agrees. Although the new study shows clear differences in the cancer rates in certain towns, “All you know is what their exposure in the water is. You don’t have any blood levels from the people,” said Birnbaum. “But it could very well be that this would be the kind of point where people will say, OK, there’s enough data that we should go in and do another study.”

Voluminous research has already shown links between PFAS and a wide range of health effects, including weakened immune response, reproductive difficulties, hormonal imbalances, and obesity. The cancers that have been clearly linked to the chemicals include testicular cancer, kidney cancer, prostate cancer, and, in mice, pancreatic cancer.

Although it is now clear that thousands of sites in the U.S. have been contaminated, surprisingly few studies have looked at the cancer rates in these toxic hot spots. Studies of people who lived near a DuPont plant that released PFOA into the public water supply in West Virginia and Ohio, conducted between 2005 and 2013, showed that exposure to the chemical was “more probably than not” linked to elevated rates of testicular and kidney cancer, cholesterol, thyroid disease, preeclampsia, and ulcerative colitis, which can lead to rectal cancer.

“The more people they contaminate, the harder it is for those of us exposed to prove the harm from that exposure.”

Robert Bilott, the attorney who led the class-action litigation that led to the creation of the panel of epidemiologists who conducted the studies of the effects of PFOA near the West Virginia plant, expressed frustration at the ongoing challenges of demonstrating the health impacts of the chemicals, which have been used in firefighting foam, nonstick coatings, and hundreds of other products.

“It’s infuriating that the more these PFAS manufacturers contaminate the planet, the more difficult it is to do effective human health studies, as there are fewer and fewer ‘uncontaminated’ populations to compare to,” said Bilott. “It’s as if, the more people they contaminate, the harder it is for those of us exposed to prove the harm from that exposure.”

Messmer, who now runs the nonprofit group New Hampshire Science and Public Health and serves on a state commission on the public health impacts of PFAS, said that she and others focused on cleaning up and preventing PFAS pollution in the state have run into considerable resistance. “The opposition for certain comes from lawyers hired by Saint-Gobain,” said Messmer.

Saint-Gobain did not respond to inquiries for this story.

Messmer also pointed to a recent session of the State Senate’s Energy and Natural Resource Committee during which Jodi Grimbilas, a lobbyist representing the American Chemistry Council, compared PFAS to berries. While the legislators discussed the possibility of regulating the chemicals as a class, Grimbilas said that PFAS are like berries: While some are poisonous, others, like strawberries, blueberries, and raspberries, are “good.”

Murphy is pushing for more research to elucidate the precise relationship between the illnesses in her family members and the PFAS compounds in Merrimack’s air and water. “My kids grew up here. I have grandchildren who live here now. We’re talking about three generations of people who have been harmed by polluters here,” she said. “And [the polluters] don’t give a rat’s ass.”