O’Rourke, who died Tuesday, had a lot of worthwhile things to say. But he was always graded on a curve. 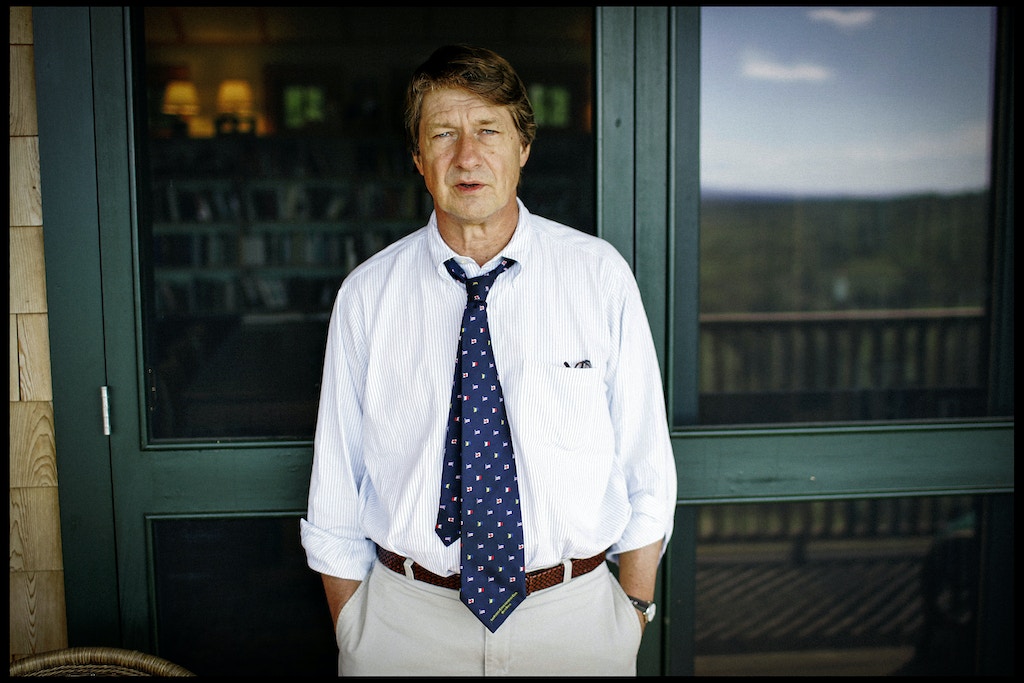 The conservative writer P.J. O’Rourke, author of 20 books, died on Tuesday at age 74. For decades O’Rourke appeared constantly on television and radio shows because they always needed someone both right-wing and funny, and he was the only such person available.

O’Rourke was, according to people who knew him, a fundamentally decent human being. Here you can read a letter that O’Rourke wrote to Peter Segal, the host of NPR’s “Wait Wait … Don’t Tell Me!,” when Segal’s mother died. O’Rourke was sometimes referred to as one of the founders of National Lampoon and would always humbly correct this; he was the magazine’s editor during part of the 1970s, but it had been created by others before he showed up.

As “60 Minutes” put it in a 1994 profile, O’Rourke was “the right wing’s favorite political satirist” and a huge influence on generations of Republican writers who hoped to achieve funniness themselves. As National Review said on the occasion of his death, “So many contemporary conservative and libertarian writers have aspired to be like him — whether they admitted it or not. None ever came close.” He was, according to John Podhoretz, the editor of Commentary magazine, “the only cool conservative writer” for many years. And here’s how Ben Shapiro feels about him:

PJ O'Rourke was an incredible wordsmith, perhaps the funniest writer of the last forty years, and a good person, too. RIP.

So while it might seem a little churlish and unkind today, it’s worth it — given O’Rourke’s dozens of metaphorical children on the right — to ask exactly how funny he was, and how penetrating his political insights were.

This has the structure and rhythm of a good joke. It might even make you laugh.

But try thinking about it for five seconds: Good comedy has to be true, and everything O’Rourke was expressing here was false.

Good governments absolutely can make people smarter, taller, and richer. Food stamps and other nutritional support for children have done that for untold millions of Americans. Government action to ban lead in paint and gasoline has prevented enormous amounts of brain damage. The internet, created and for years funded by the government, has been a gigantic economic boon to the world. The tallest people on Earth are the Dutch, which surely has something to do with the Netherlands’ extensive welfare state.

It’s also not true that Republicans prove the government can’t work. What GOP administrations demonstrate is that governments don’t work when it comes to things that the people running them don’t care about. For instance, it’s true that the Bush administration’s response to Hurricane Katrina was horrendous for the people of New Orleans, but that’s because it didn’t matter at all to Bush whether they lived or died.

But try manufacturing a drug patented by a huge pharmaceutical company, and you’ll quickly find out that the U.S. government can manage to stop you. When Wall Street set itself on fire in 2008, the Bush administration leapt into action and successfully saved it. Ask people living in Gaza whether the F-15s that America gifts Israel work, and they will answer in the affirmative. Governments often function well at anything that’s a priority for those at the top of the pyramid.

Another favorite O’Rourke aphorism was “If you think health care is expensive now, wait until you see what it costs when it’s free.” Again, that sounds exactly like a good joke, and certainly made many conservative audiences chortle during after-dinner O’Rourke speeches. But it likewise is exactly the opposite of reality. The U.S. currently spends almost 20 percent of its GDP on its health care system, about twice what countries do which provide health care for everyone for free, or close to it.

Or take O’Rourke’s 1993 speech at the opening of the Cato Institute’s headquarters on Massachusetts Avenue in Washington, D.C.:

We have no ideology, no agenda, no catechism, no dialectic, no plan for humanity.

This was absolutely preposterous self-flattery. The Cato Institute is one of the most ideological think tanks to have ever existed, both in bad ways and (in its principled anti-war stance) good.

In particular, consider Cato’s statement that “private property is the foundation not only of prosperity but of freedom itself.” A better satirist than O’Rourke might have noted the irony that he was speaking on a street named after a group of people called the Massachuset. Did they ever have any property? I wonder what happened to it.

O’Rourke was also given to startling eruptions of bile, as when he explained in his book “Give War a Chance”: “At the core of liberalism is the spoiled child — miserable, as all spoiled children are, unsatisfied, demanding, ill-disciplined, despotic and useless. Liberalism is a philosophy of sniveling brats.” It seems reasonable to say that spoiled children exist across the U.S. political spectrum; recently one was a Republican president. (In fairness, O’Rourke did vote against Donald Trump in 2016 and called him “unstable” and “dangerous.”)

None of this is to say that O’Rourke was never funny or had nothing worthwhile to say about politics. He was and he did, especially when his ire was directed at humanity in general, or America’s ridiculous Brahmin left.

But if we’re being honest — and O’Rourke would probably say we should be, even the day after he died — we should acknowledge that his prominence was fundamentally due to him being graded on a curve. Conservatism has never lent itself to being funny and never will. Saying “This is as good as humans can manage so let’s never change the structure of power” will generally only make the powerful laugh. But the “liberal” media had to book someone like him, and there he was.

Molly Ivins, O’Rourke’s contemporary and often presented as his liberal counterpart, once said, “Satire is traditionally the weapon of the powerless against the powerful. I only aim at the powerful. When satire is aimed at the powerless, it is not only cruel — it’s vulgar.” And now we are beset by dozens, hundreds, thousands of O’Rourke’s Mini-Mes, teeny copies of him without his talent. They want to be funny, and never will be. But they absolutely do manage to be extremely cruel and vulgar.