Marina Ovsyannikova, a Russian state television employee, burst onto the set of a live news show on Monday to denounce the invasion of Ukraine. 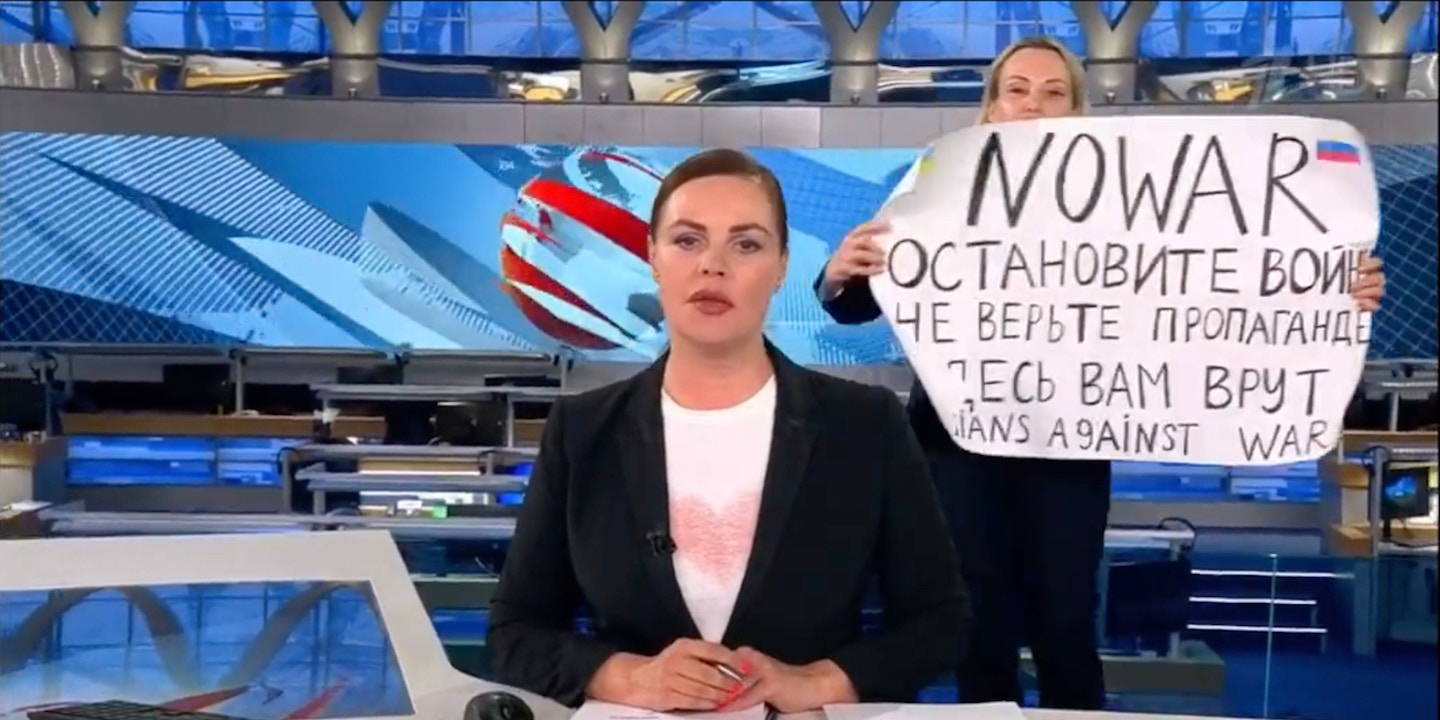 A new Russian law banning even the use of the word war to describe Russia’s invasion of Ukraine was dramatically broken on Monday by an employee of the state broadcaster, who burst onto the set of a live television news broadcast holding a sign that denounced the attack as she shouted: “Stop the war!” and “No war!”

Video of the protest, which lasted about 10 seconds before producers abruptly cut away from the studio to a taped report, was captured and shared on social networks by Russian journalists and opposition activists.

The sign, decorated with the Ukrainian and Russian flags, bore the phrases “No War” and “Russians against war” in English, and the Russian message: “Stop the war. Don’t believe the propaganda. They are lying to you here.”

Wow! A lady walked into a broadcast of Russian state 1channel. She started shouting "Stop the war, no to war". Her poster is saying "They lie to you here". She has then been detained. pic.twitter.com/Ri8TibwuQS

Millions of Russians are likely to have seen the anti-war message on their television screens.

Within minutes, Aleksei Venediktov, the editor of the recently shuttered independent radio station Echo of Moscow, reported on Telegram that the protester, “Marina, a mother of two children, has been arrested.”

She was identified as Marina Ovsyannikova, a producer at the state broadcaster’s Channel One, by Pavel Chikov, a human rights lawyer in Russia who tweeted that his legal defense foundation plans to defend her against the charge of violating military censorship and “discrediting the Russian armed forces.”

Tass, the Russian state news agency, confirmed that the Ovsyannikova had been arrested on those charges and works at Channel One.

Novaya Gazeta, an independent newspaper led by the 2021 Nobel Peace Prize winner Dmitry Muratov, blurred out the anti-war message on Ovsyannikova’s sign to avoid being charged with the same crime.

That led Maria Pevchikh, an investigative journalist who works with the jailed anti-corruption activist Alexey Navalny, to tweet bitterly that Muratov lacked the courage shown by Ovsyannikova.

As Kevin Rothrock of the Russian exile news site Meduza reported, Ovsyannikova recorded a video message before her protest, in which she said that her father is Ukrainian and her mother Russian, and expressed shame at working for a channel broadcasting government propaganda.

Couldn't find a version of Marina Ovsyannikova's statement with English subtitles yet, so here's one for now. Video via @KevinRothrock, translation via @meduza_en ?? pic.twitter.com/x18bQSNS0Y

“What’s happening in Ukraine right now is a crime and Russia is an aggressor country. The responsibility for this aggression is on the conscience of one man, and that man is Vladimir Putin,” Ovsyannikova said in the video, according to a translation posted on Twitter by Jane Lytvynenko, a Ukrainian Canadian journalist. Ovsyannikova added that she was ashamed to have helped broadcast lies and “ashamed that I allowed the zombification of the Russian people.”

Ovsyannikova concluded her video with the message: “Go to protests. Don’t be afraid of anything. They can’t imprison us all.”

As The Intercept has reported, Russian state television has largely downplayed or ignored the bombardment of major Ukrainian cities by Russian forces, and cast social media evidence of civilian casualties as unreliable or fake, in line with claims by the Russian government that it is engaged in a limited defensive operation, not a war of aggression against Ukraine. The suppression of independent media, the blocking of social networks, and the arrest of protesters for even hinting at their opposition to the war has imposed a near-total information blackout on the majority of Russians who rely on television for their news.

The extent of that crackdown on dissent in Russia today can be seen in video posted online this weekend by Activatica, an online news platform covering grassroots activism across Russia founded by the environmentalist Yevgenia Chirikova. The video showed that as soon as a woman standing in Moscow’s Manezhnaya Square held up a sign that simply said “two words” — a coded reference to the banned phrase “no war” — she was hauled off within seconds by police in riot gear.

Arrests at an anti-war demonstration in Moscow.
Watch to the end.
English subtitles pic.twitter.com/kSMS1YF4ij