The president’s immigration policies forced refugees into detention, where they faced “horrific abuse and mistreatment,” a rights group says. President Joe Biden’s immigration policies on the U.S.-Mexico border have fueled the prolonged detention of tens of thousands of asylum-seekers in the past year, according to a new report by a human rights group. Nearly all the immigrants apprehended by authorities during the period were taken into custody in a region where asylum access has been largely shuttered since March 2020 and where anyone who asks for asylum outside a port of entry — a right enshrined under domestic and international law — is considered a threat until proved otherwise.

Drawing from nearly 300 individual accounts, the 66-page report, published Thursday by Human Rights First, describes activists, dissidents, student organizers, and others fleeing persecution in dozens of countries, only to languish for months in U.S. detention centers.

The report documents dehumanizing conditions within those centers; heightened levels of racist and abusive treatment of Black and LGTBQ+ asylum-seekers; children held in adult facilities; massive legal and economic challenges for those in custody; and the ongoing separation of families across the U.S-Mexico divide.

“Detention is dehumanizing, dangerous, and cruel. It fuels family separation and re-traumatizes people.”

“Detention is dehumanizing, dangerous, and cruel,” Rebecca Gendelman, an associate attorney for refugee protection at Human Rights First and lead author of the report, told The Intercept. “It cuts off access to legal representation and information, preventing asylum-seekers from fairly representing their claims for protection. It inflicts physical and psychological harm. It fuels family separation and re-traumatizes people — including those who were detained, tortured, beaten, and threatened by the governments of the countries they fled — and it coerces people into giving up on their claims.”

The report comes just a month before the Biden administration is expected to lift Title 42. A Centers for Disease Control and Prevention rule issued by the Trump administration in March 2020 — over the objections of career public health professionals at the agency — Title 42 has been used to summarily expel or rebuff most migrants, including asylum-seekers, at and between official ports of entry. With the lifting of the order, advocates and law enforcement officials anticipate a significant increase in individuals attempting to cross the border and apprehensions to rise as a result.

Human Rights First’s report raises concerns that the Biden administration’s current enforcement priorities could mean that more asylum-seekers find themselves in U.S. detention centers in the months ahead.

“As the Biden administration ends the illegal Title 42 policy and restores compliance with refugee law, it should not jail asylum-seekers who it processes into the United States — it should welcome them with dignity,” Gendelman said. “The government should partner with NGOs to put in place a humanitarian reception system for asylum-seekers coming to the border.” 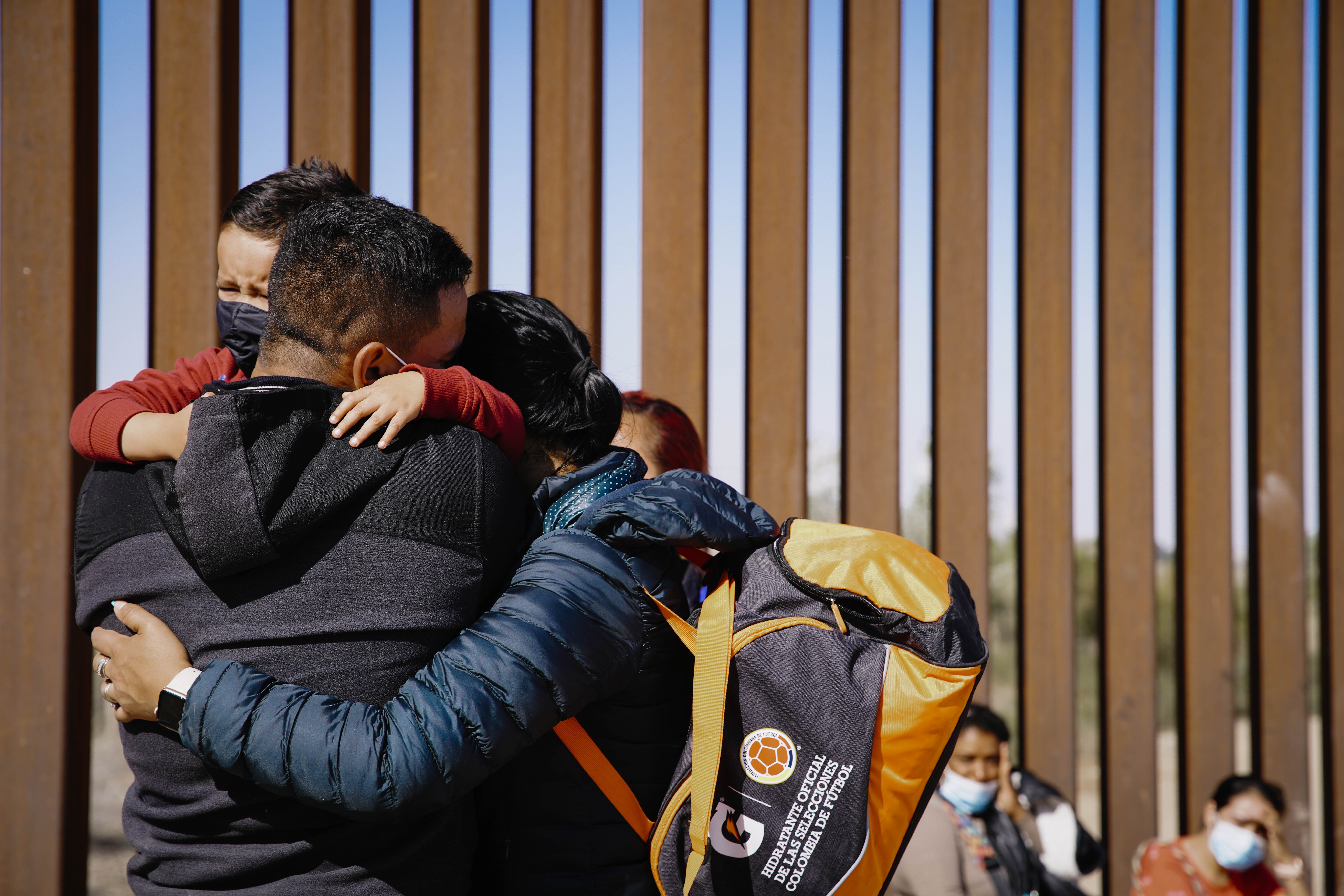 Asylum-seekers embrace next to the U.S. border wall while waiting to be processed by Customs and Border Protection in Yuma, Ariz., on Feb. 21, 2022.

The report scrutinizes the enforcement priorities that Biden first implemented as interim measures a month after taking office. In September, the priorities were made official in a memo that the head of U.S. Immigration and Customs Enforcement issued directing personnel to “use our discretion and focus our enforcement resources in a more targeted way.”

Biden had vowed to break with his predecessor on immigration matters, pointing to former President Donald Trump’s separation of families on the border as a “criminal” act that “violates every notion of who we are as a nation.” His shift in priorities did mark a change — Trump made nearly every undocumented immigrant in the country an equal priority for deportation — but it also contained an important caveat for the border itself: Any “noncitizen who poses a threat to border security” was still considered “a priority for apprehension and removal.”

Under this framework, “a threat to border security” has meant anyone arrested attempting to enter the country illegally at a port of entry or anyone apprehended on U.S. soil without authorization to be in the country after November 1, 2020. Though “there could be mitigating or extenuating facts and circumstances” and officials are encouraged to “evaluate the totality of the facts and circumstances and exercise their judgment accordingly,” Biden’s priorities do not include blanket exceptions for any groups.

According to Human Rights First, U.S. immigration officials have used the priority placed on border security to justify detaining asylum-seekers as a matter of course. “In December 2021, an ICE officer confirmed to Human Rights First that ICE jails people who come to the border pursuant to the enforcement priorities guidance,” the report said, adding that the priorities have also been used to deny asylum-seekers release from detention.

Exact figures on how many asylum-seekers the Biden administration has jailed are difficult to ascertain, the report noted, because ICE has for several years failed to produce data in a timely or consistent manner, despite being required to do so by law. Customs and Border Protection runs its own detention centers near the border.

People apprehended by CBP are generally paroled, expelled, or transferred to ICE’s nationwide jail network for further adjudication of their immigration case. If they are seeking asylum, those individuals are entitled to what’s known as a “credible fear interview” to make an initial assessment of their case. Human Rights First arrived at its conclusion of “tens of thousands” of asylum-seekers detained under Biden, with most taken into custody on the border, by extrapolating from the available data related to those interviews.

On average, the asylum-seekers Human Rights First spoke with experienced nearly four months of detention, though many were jailed for up to 10 months or more. They included “a Nicaraguan asylum seeker detained for three months and denied parole as a ‘border security’ enforcement priority; a Venezuelan asylum seeker living with HIV imprisoned for nearly five months; and an Angolan human rights defender detained for eight months even though his wife and children are living in the United States pursuing their asylum claims,” the report said.

Asylum-seekers jailed by the Biden administration have often remained in custody even after establishing a credible fear of persecution in their interviews with U.S. immigration officials, according to Human Rights First.

“While the total number of asylum seekers detained after receiving positive fear determinations has declined significantly in recent months, government data reveals that asylum seekers in ICE detention who established a fear of persecution have been jailed for an average of 10.75 months (326.8 days), as of late-March 2022,” the report said. “Erroneous negative determinations and months-long delays in conducting fear interviews have prolonged detention for many others.”

The report documented extensive financial hurdles for asylum-seekers in custody, with the average immigration bond in fiscal year 2021 set at nearly $10,000 and some set as high as $100,000. The report noted that the fact of being jailed, coupled with the lack of guaranteed access to a lawyer, greatly diminishes an asylum-seeker’s ability to meaningfully access the legal system to present their case. Asylum seekers board a bus to be transported to an immigration facility, after crossing the Mexico/U.S. border into Yuma, Ariz. on February 21, 2022.

Inside the detention centers themselves, Human Rights First found “horrific abuse and mistreatment,” including “an asylum seeker thrown into solitary confinement, without clothing, after a suicide attempt, and denied access to a shower, toilet paper, and a toothbrush for 21 days; a Mexican transgender asylum seeker who was sexually assaulted after ICE jailed him in a unit that did not correspond to his gender identity and, for his own safety was forced to request to be held in near 24-hour lockdown in solitary confinement; and a Brazilian asylum seeker who was verbally abused by a therapist when he sought mental healthcare.”

“Multiple minor children have been illegally held in adult detention facilities even though they presented documentation of their age.”

According to the report, “Multiple minor children have been illegally held in adult detention facilities even though they presented documentation of their age.”

Asylum-seekers from Black-majority countries received particularly bad treatment, spending 27 percent more time in jail and facing harsher release requirements than other people held in detention. “In one instance, ICE officers explicitly stated that they had been instructed to release Cubans, Nicaraguans, and Venezuelans to create additional detention bed space while ICE was simultaneously detaining large numbers of Haitian asylum seekers and migrants at the same facility,” the report said.

Human Rights First documented several individual cases of anti-Black abuse in immigration custody. According to the report, asylum-seekers had their braids or locks forcibly cut off by detention staff and racist comments were directed at Black asylum-seekers that included references to slavery and lynching.

In place of “border security threat” priorities for asylum-seekers, Human Rights First is pushing for “alternative to detention” programs that would link those individuals with legal counsel outside the jailhouse setting. Such programs have proved highly effective at ensuring that asylum-seekers attend their court hearings. A 2021 study by the American Immigration Council found that 96 percent of nondetained immigrants represented by a lawyer attended all of their hearings from 2008 to 2018. The “alternative to detention” programs are also vastly less expensive than the current model.

“Jailing asylum-seekers is not only cruel, but it’s also unnecessary and wasteful,” Gendelman said. “The Biden administration should instead use humane, proven, community-based case support to welcome asylum-seekers and allow them to pursue their cases while living in U.S. communities. It’s a cruel choice to detain them, and a costlier one as well.”