The Border Patrol Is Systemically Failing to Count Migrant Deaths

With record levels of migrants perishing in the desert, border agents are flouting a new law requiring tallies of the dead. 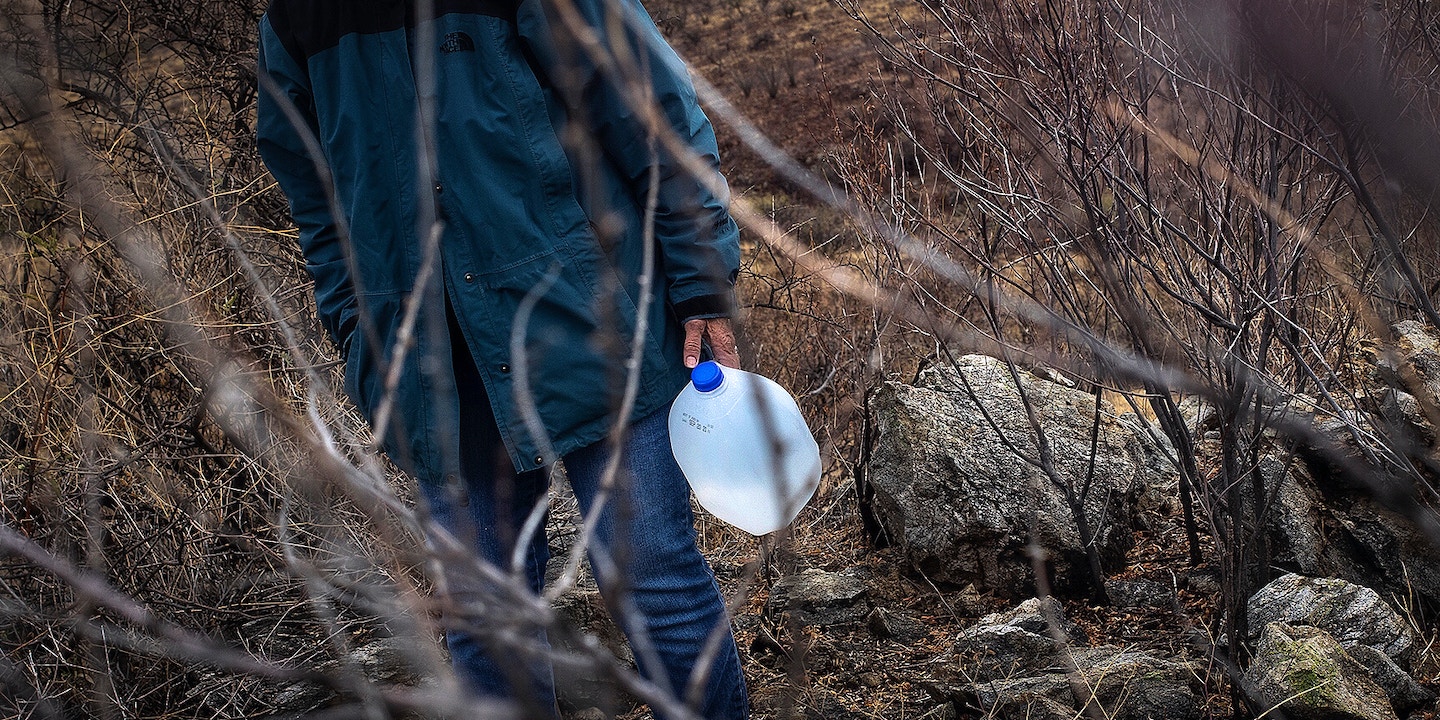 After decades of disappearances, thousands of lives lost, and a new law requiring greater accountability, the U.S. Border Patrol continues to fail at counting migrant deaths along the southern border, a recent report to Congress found.

The Government Accountability Office, in a little-noticed report released late last month, informed lawmakers that the Border Patrol “has not collected and recorded, or reported to Congress, complete data on migrant deaths.” The omission included data the Border Patrol was required to track and turn over under legislation passed last year. The law specifically obligates the agency to include data collected by entities other than the Border Patrol itself in its reports on migrant deaths. The failings mark the first public government assessment of the agency’s response to the new legal requirements.

“It confirms something that we suspected for a long time,” Daniel Martínez, an associate professor at the University of Arizona and one of the world’s leading experts on migrant deaths in the Sonoran Desert, told The Intercept. “We’ve known this for a while — that the Border Patrol is not doing an effective job of counting the dead.”

The report to Congress focused heavily on the Border Patrol’s Tucson Sector; in recent years, major discrepancies have emerged between the agency’s data and that of the local medical examiner’s office.

Martínez and his colleagues at the University of Arizona’s Binational Migration Institute highlighted those discrepancies in an extensive report published last spring. The academics’ report looked at three decades of migrant death data collected by the Tucson-based Pima County Office of the Medical Examiner — which has jurisdiction in five southern counties — and compared it against similar data collected by the local Border Patrol sector.

Overall, from fiscal years 2014 through 2020, the medical examiner’s office counted 855 suspected migrant remains recovered. The Border Patrol’s Tucson Sector counted 488. It was an indication that the Border Patrol had shifted to only tracking cases in which its own agents discovered migrant remains, while the medical examiner’s office counted Border Patrol recoveries in addition to those made by a wider group of actors in the Sonoran Desert, including local law enforcement agencies, humanitarian groups, and private citizens.

“As far as I’m concerned, Border Patrol data are not reliable. And that’s a huge problem, especially if policymakers are relying on their data to make decisions.”

The GAO found the medical examiner’s data “sufficiently reliable for reporting the number of migrant deaths in the Tucson sector” and interviewed local Border Patrol officials about the years of discrepancies. The officials blamed “confusion as to the definitions of deaths and rescues” and “supervisor turnover” for its gaps in record-keeping. Agents consult the medical examiner’s data for “overall situational awareness,” officials told the GAO, but they do not update their agency’s internal system for tracking migrant deaths when they are reported by the medical examiner’s office, as required by law. (Customs and Border Protection, the parent agency of the Border Patrol, did not respond to a detailed request for comment.)

The GAO’s report comes as spring is turning to summer, historically the most lethal months for migrants crossing the border — last year was Arizona’s deadliest on record.

“As far as I’m concerned, Border Patrol data are not reliable,” Martínez said. “And that’s a huge problem, especially if policymakers are relying on their data to make decisions.” Left/Top: Flowers, crosses and sugar skulls honoring dead migrants raise awareness on the numbers of migrants dead on the border on the Day of the Dead in Tijuana, Mexico, on November 2, 2021. Right/Bottom: U.S. Border Patrol discovers the remains of a deceased male migrant, Alfonso Nieto Valladares, 25, from Honduras in Encino, Tex, on June 3, 2021.Photos: Guillermo Arias/AFP and Gary Coronado/Los Angeles Times via Getty Images

Over the past two decades, an estimated 8,000 to 10,000 people have lost their lives crossing the southern border, though the true number is impossible to know due years of spotty record-keeping on the part of the nation’s premiere border enforcement agency and its local law enforcement partners. The Missing Persons and Unidentified Remains Act, a rare piece of bipartisan border legislation signed into law in the final days of the Trump administration, was supposed to change that.

Under the law, the Border Patrol’s legal obligations are clear: When a migrant’s body is found on the U.S.-Mexico divide, the agency is required to document the discovery, no matter who made the initial encounter. According to the GAO, that has not happened.

“Specifically, Border Patrol’s fiscal year 2020 report to Congress did not contain complete data because the agency did not record all available information on migrant deaths from external entities in its system of record, or describe these data limitations in the report,” the GAO report said. “In particular, Border Patrol is not recording all migrant deaths in instances where an external entity first discovers the remains.”

Funneling migrants into “hostile terrain” is the core feature of a Border Patrol enforcement strategy known as “prevention through deterrence.” Implemented in 1994 under the Clinton administration, the original idea was to push people into areas so rugged and deadly — while at the same time bolstering surveillance and interdiction infrastructure around major border cities — that they would not cross the border without authorization under fear of death.

Two and a half decades later, the strategy has fostered a flourishing human smuggling economy and transformed the U.S.-Mexico divide into the deadliest border in the Western Hemisphere. According to the GAO, “Border Patrol agents along the southwest border report that 9-1-1 calls from lost individuals have become a daily occurrence.”

The GAO had good reason to examine the Border Patrol’s Tucson Sector, Martínez explained, not because the area is uniquely better or worse than its counterparts, but because the medical examiner’s office in Tucson represents the “gold standard when it comes to investigating border-crosser deaths.”

Nearly all of Southern Arizona’s border runs through public lands, unlike South Texas, where the divide often cuts through vast private ranches. Additionally, Tucson is a large city, whereas the counties of South Texas include some of the most impoverished districts in the country. Borderwide, these local differences in access and resources directly inform how migrant bodies are found and accounted for. When it comes to tallying the dead, the GAO found, inconsistency reigns. What Martínez found most perplexing was why the Border Patrol’s Tucson Sector suddenly began undercounting migrant deaths in 2014. Bureaucratic breakdowns and confusion over the definition of migrant deaths fail to fully explain the shift, he argued, and they certainly do not excuse failure to meet legal obligations and provide reliable migrant death data to Congress.

The deadliest year that the medical examiner in Tucson ever recorded was in 2021, with 226 sets of human remains recovered. Border Patrol officials and news reports attributed the deaths to the state’s soaring temperatures and in some cases to the climate crisis.

The reasoning is understandable, Martínez said, but it obscures important truths about how and why migrants are dying in the desert.

In a paper published in the Geographical Journal in March, Martínez and his University of Arizona colleague Samuel Chambers showed how migrants are increasingly dying of exhaustion upon making it to “locations that are better suited to core temperature regulation, and therefore toward survival.”

High temperatures and the climate crisis, they argued, thus serve as a “moral alibi” for prevention through deterrence doing what it has always done. What’s really killing people in the desert, Martínez said, is an intentionally lethal policy colliding with an ongoing absence of political will and imagination to try something different.

“There are other alternatives besides just increased border enforcement, increased border militarization. There are solutions to undocumented immigration,” he said. “But I think the political will is not there in Washington, D.C. Immigration just becomes this political football that gets punted back and forth between the Democrats and Republicans every time you have a change in administration.”