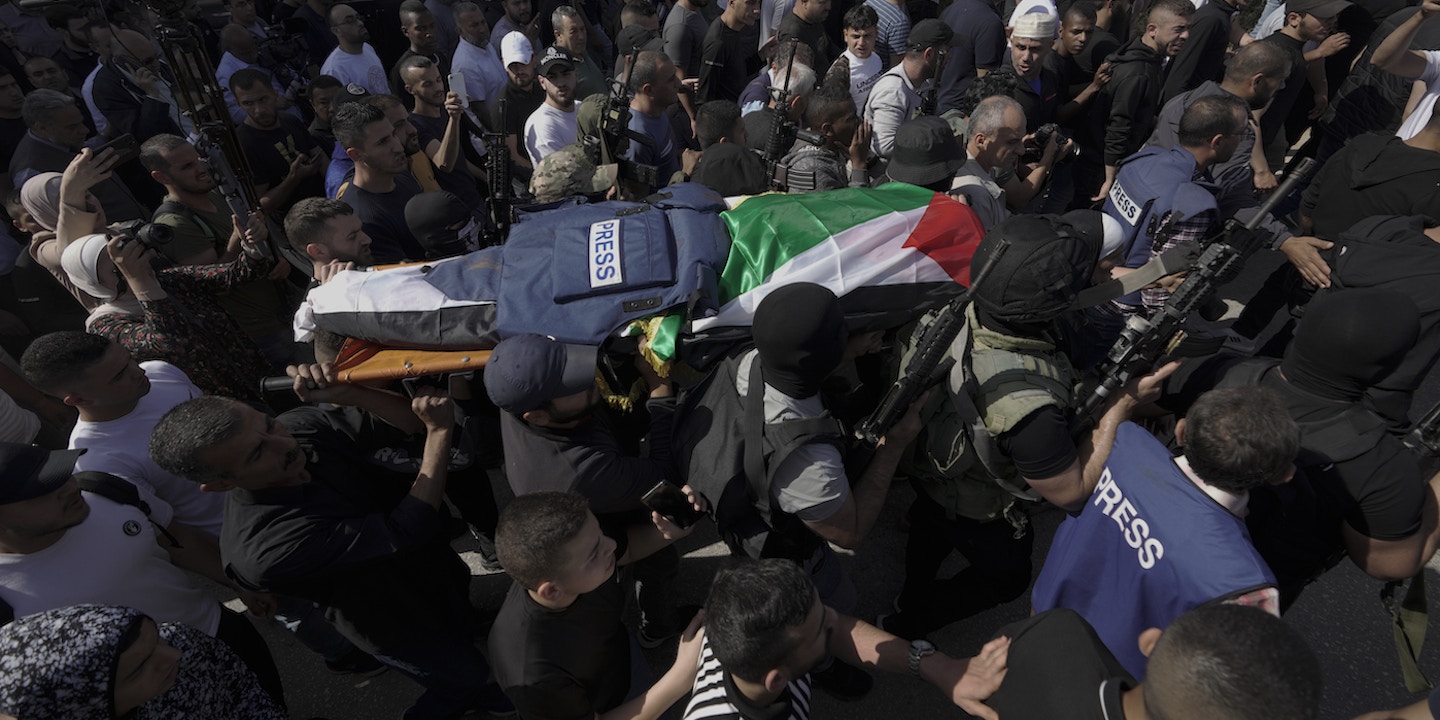 An effort by Israeli officials to use social media evidence to blame Palestinian militants for the fatal shooting of a journalist in the occupied West Bank on Wednesday unraveled within hours, as a close analysis of video shared by Israel showed that a Palestinian gunman was shooting in the direction of Israeli soldiers, not the reporter.

Immediately after the tragic killing of Shireen Abu Akleh, a renowned Palestinian American journalist who was gunned down while covering an Israeli raid on a refugee camp in Jenin, three other journalists who were with her, including one colleague who was shot and another who tried to save her, said that the group had come under fire from Israeli soldiers.

Clearly depicts continued Israeli firing after Shireen Abu Akleh went down. Screams of “Ambulance”. One man tries to retrieve Shireen, others scream at him to move back from Israeli sniper range.

Israel killed Al Jazeera journalist Shireen Abu Akleh this morning while she was reporting in Jenin. Shireen was among the finest Palestinian journalists. Her life and even her death are a testament to Israel’s crimes. Words cannot describe how devastated we are. #FreePalestine

In response, a chorus of senior Israeli officials insisted that it was “likely” the reporter had been killed by Palestinian militants, who exchanged fire with Israeli soldiers during the raid.

To support that case, Israeli Prime Minister Naftali Bennett, the Israeli Foreign Ministry, and the Israeli Embassy in Washington all shared video on social networks that showed a Palestinian gunman opening fire during the raid.

The edited and subtitled video, which was originally released by Palestinian militants, included a comment from an unseen person who said, in Arabic, that the militants had shot a soldier who was “laying on the ground.”

This morning, in Jenin, terrorists heard saying: "They've hit one, they've hit a soldier, he's laying on the ground"

But no IDF soldier was injured in Jenin

Israeli officials called this evidence that the Palestinian militants might have mistaken Abu Akleh, a well-known correspondent for Al Jazeera who was wearing a blue helmet and flak jacket labeled “press,” for an Israeli soldier.

However, an investigation of the video by a local researcher for the Israeli human rights group B’Tselem showed that the militant had been firing down an alley in the densely populated refugee camp that was nowhere near the entrance to the camp where Abu Akleh and other journalists had been pinned down by gunfire.

This morning, B’Tselem’s field researcher in Jenin documented the exact locations in which the Palestinian gunman depicted in a video distributed by the Israeli army, fired, as well as the exact location in which Journalist Shireen Abu Akleh was killed. pic.twitter.com/6VbEJJuF7z

Working with visual clues from the harrowing video of Abu Akleh’s colleagues and bystanders attempting to rescue her, and a tip from an Agence France-Presse correspondent on the scene, geolocation experts confirmed that the Al Jazeera correspondent was at the edge of the camp, about a six-minute walk away from where the militant was recorded firing down an alley.

A memorial at the site in Jenin camp where Shireeen Abu Aqleh was shot dead this morning pic.twitter.com/DizcX5sslV

B’Tselem confirmed the geolocation of Abu Akleh’s position, and that of the militant, and plotted them on a map of the camp. Together with the video recorded by the B’Tselem researcher, the map shows that it was impossible for the bullets fired by that gunman to have struck the journalist, since he fired into an alley in a built-up area of the camp that was around two corners from the street where Abu Akleh was standing when she was shot. The relative positions of a Palestinian gunman and the journalist Shireen Abu Akleh in Jenin, plotted on a map by B’Tselem, an Israel human rights group that works with Palestinian researchers to document abuses in the Israeli-occupied territories.

Israeli govt has circulated a video of a gunman firing down an alley. @btselem geolocated the footage. This is the route that the bullet would have had to travel to hit Shireen Abu Akleh: https://t.co/EVmcX2iwJx pic.twitter.com/DOHqCjEDMC

As the Al Jazeera English producer Linah Alsaafin noted, video clip of the effort to rescue Abu Akleh seemed to show that anyone who approached her was fired on, which suggests that the group of journalists was under deliberate attack and not just subject to indiscriminate fire.

Later on Wednesday, after the B’Tselem investigation showed that the bullets fired by the Palestinian militant in the video Israel circulated could not have struck Abu Akleh, the Israel Defense Forces chief of staff, Gen. Aviv Kochavi, said in a statement that it was not yet possible to be sure who had shot Abu Akleh, expressed regret for her death, and ordered an investigation. That, several activists noted, was quite different from an earlier statement from an Israeli military spokesperson who said that the journalists who were shot had been “armed with cameras.”

The Israeli army later released body camera footage shot during the raid, apparently to illustrate that its forces had come under fire from Palestinian militants in the camp.

IDF publishes a video of troops operating in Jenin earlier this morning, under heavy gunfire. The IDF says it is continuing to investigate the death of Al Jazeera reporter Shireen Abu Aqleh. pic.twitter.com/0FhJvUfe6B

But when that body camera video, recorded during the raid, is compared to the video recorded by the B’Tselem researcher later in the day, the Israeli footage also serves to confirm that Israeli soldiers were at the end of the alley the Palestinian militant had been filmed firing down. Looking at the two clips side-by-side also reveals that when the Israeli soldiers retreated from that alley, they emerged onto the very same street that Abu Akleh was standing on when she was shot.

Update: May 13, 2022
This article was updated to add a map and a side-by-side video comparison of footage recorded by an Israeli soldier during a raid on a refugee camp in Jenin on May 11 and footage recorded just after the raid by a human rights activist.