Racist “Replacement” Conspiracy Is Undergirded by a Real Resource Scarcity

It would be folly to ignore the inequality, resource scarcity, and ecological calamity that lurk behind the Buffalo shooter’s racist conspiracy theories. 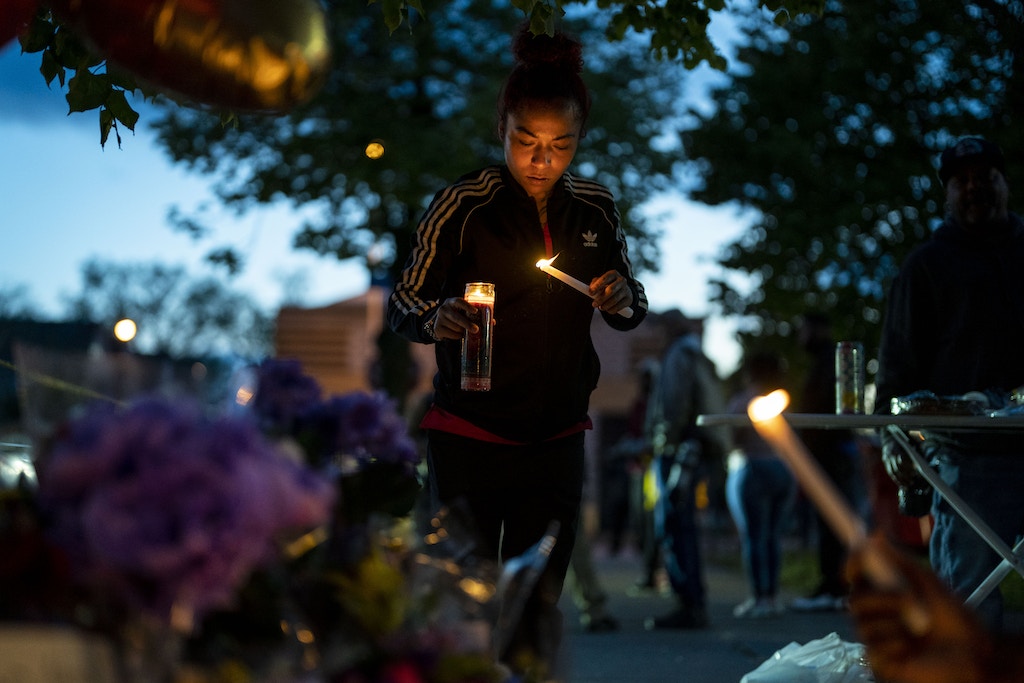 Alexis Rodriguez, of Buffalo, lights candles as people gather at the scene of a racist mass shooting at Tops Friendly Market in a historically Black neighborhood of Buffalo, N.Y., on May 16, 2022.

Before he walked into the Tops Friendly Market in Buffalo, New York, on a mission to murder as many innocent Black shoppers as he could, 18-year-old Payton Gendron posted a rambling manifesto online outlining his motives.

His reasoning was familiar from other far-right shooters: This country isn’t going to be resource-rich enough for everyone in the future, so a race war over what is left is necessary today. However heinous, this vision of a bleak, impoverished future, in which there is not enough wealth to go around and the environment is near collapse, is motivating an ever-growing number of young men like him to carry out racist massacres across the West.

Addressing this violence requires considering the role of scarcity — not a conspiracy theory, but a very real system of extreme inequality and ecological destruction.

People who commit acts of terrorism tend to act for more than one reason. The racist hatred of Gendron toward Black Americans, Jews, and immigrants was ultimately what made his murders possible. For that, many are to blame, including far-right politicians and talking heads who have continued to wink at the “great replacement” as being the true source of white Westerners’ troubles.

Addressing this violence, though, also requires considering the role of scarcity — not a conspiracy theory, but a very real system of extreme inequality and ecological destruction. It is a system in which the most wealthy and powerful continue to see their wealth and power grow — at the expense of the masses. Faced with actual strained resources and environmental calamity, some of these forsaken people are turning to dark fantasies like the “great replacement theory” to make sense of it all.

This is not just about a toxic media ecosystem, but the larger way we have organized our lives in the West. This organizational structure could go by many names — neoliberalism, consumer capitalism, exploitation — but there can be little doubt that the pessimism it engenders is leading many young people into nihilism.

Faced with a shrinking economic pie and disastrous climate situation, many young people are now convinced that the world they become adults in will be poorer, more polluted, and less hopeful than that enjoyed by their parents and grandparents. It should not be surprising, then, that the appeal of apocalyptic ideologies is taking hold. The problems of economics and the environment are real, but the scapegoating is where the conspiracies come in: It doesn’t take much to convince those already gloomy about their futures that the real culprits are immigrants and minorities.

That Gendron is a racist barely needs stating. His manifesto shows no concern for the humanity of nonwhite people, describing them as a pestilence to be eradicated from Western countries. He even advocates killing nonwhite children, arguing that if they are allowed to live, they will simply spawn more “replacers” — a nod to the “great replacement theory” of demographic change promoted by other far-right shooters, which claims that white people are being inflicted with a “genocide” caused by low birthrates and immigration.

If there is a major theme besides racism that runs through Gendron’s manifesto, it is simple pessimism about the future. In his writings, he concluded that the future of the U.S. will be one of economic decay and environmental collapse. With such a dire perspective, along with a belief that other races and ethnic groups are both inferior to white people and their natural enemies, his actions followed naturally from his worldview.

We should all be disturbed that he is clearly not alone in believing what he does. Bullet holes are seen in the window of Tops Friendly Market at Jefferson Avenue and Riley Street, as federal investigators work the scene of a mass shooting on May 16, 2022 in Buffalo, NY..

People who would never dream of carrying out such a crime — and who have no sense of hatred for other races — feel similarly bleak about the future. A recent study by UNICEF found that a majority of 15- to 24-year-olds in high-income countries had concluded that with wage stagnation, they will be worse off economically than their parents were.

It’s not that there aren’t enough resources to go around in the U.S., but it feels that way to many when a relatively small number of people have been hoarding the wealth. At this point, it’s almost cliché to point out that in the U.S. the 1st percentile of earners have seen their wealth explode over the past several decades, while that of the bottom 50 percent of the country has remained completely stagnant.

Then there’s the alarming state of the natural environment. The total failure of political elites and the wealthy to combat the climate crisis is fueling despair among the young about whether they will even have a future at all. Although environmentalism is usually associated with the left today, the right has a long history of using concerns about ecological destruction as a recruiting tool. The politics of fear could easily leverage this as a major issue again, making it into a mass appeal to the disaffected; in the mass shooters, we are already seeing it happen on the fringes.

If we really want to see fewer tragedies like the racist murders in Buffalo, we need to combat the nihilism at the core of the shooter’s worldview.

A recent global survey found that over three-quarters of young people felt that the future would be frightening because of climate change, while fully 56 percent said that they thought humanity was “doomed.” The conviction that our political choices have doomed us to a future apocalypse is leading to a mental health crisis among young people in the U.S. and beyond.

At the same time, even liberal politicians who pay lip service to the issue seem unwilling or unable to do anything to deliver a plausible picture of a better environmental future. In his manifesto, Gendron went on about the “continued destruction of the natural environment” while concluding that racist murder was an acceptable way to help stop it.

If we really want to see fewer tragedies like the racist murders in Buffalo, we need to combat the nihilism at the core of the shooter’s worldview. Fighting racism itself is going to be a part of that effort. If wealth was not so concentrated, however, or if politicians acted as though the climate crisis really mattered, there would be a smaller reservoir of nihilistic youths for right-wing extremists to recruit from in the first place.

The people with power in the U.S. today — whose wealth has skyrocketed even as their fellow citizens’ prospects darken — have the power to do a lot to change that mindset. An end to the class warfare that has enriched the wealthiest sliver of Americans while the rest suffer the ravages of stagnant wages, addiction, and family breakdown would be a good start. If the outlook for the future for young people doesn’t get brighter, with more wealth to share and a climate capable of supporting life, we are going to see many more acts of mass murder in the future — accompanied by the release of pitiful, imitative manifestos like that Gendron posted before wasting his life to take others’.