The dangerous, restricted unmanned fighter planes would be a major step up in the arms the U.S. is giving to Ukraine. 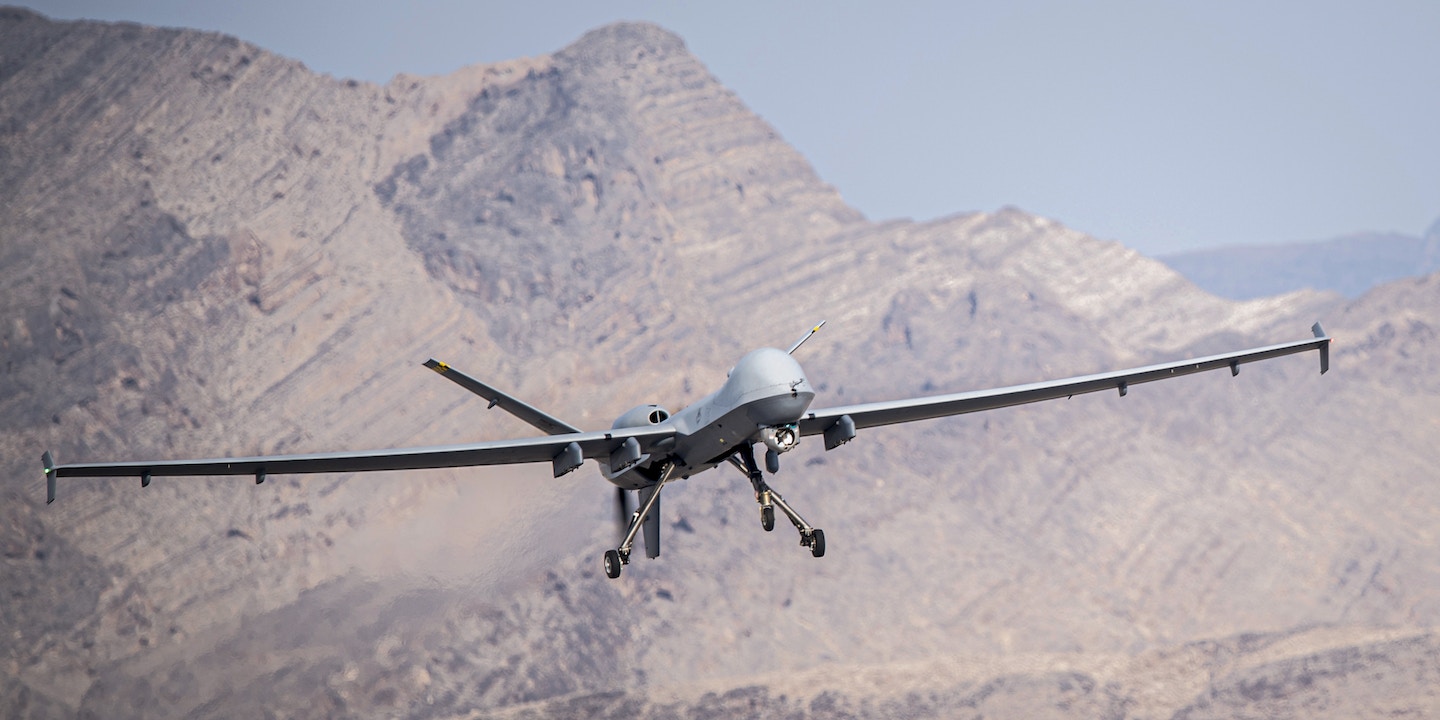 After failing to convince the Biden administration to ship NATO fighter jets to Ukraine, the military-industrial complex is now trying to coax the White House into sending what are, essentially, unmanned fighter jets to counter Russia’s invasion. Kyiv reportedly met with the major defense contractor General Atomics about obtaining the “Hunter-Killer” MQ-9 Reaper drone, armed with Hellfire missiles, which the U.S. has infamously used in botched airstrikes that killed and maimed civilians in Afghanistan, Somalia, and other countries around the world. The company and Kyiv’s allies in Washington are appealing to policymakers to greenlight the export, despite the high risk of escalation that could turn the devastating war nuclear.

Take retired Air Force Lt. Gen. David Deptula, dean of the influential and General Atomics-funded Mitchell Institute for Aerospace Studies, who penned an op-ed in Forbes advocating for the U.S. to give Ukraine Reapers in March, before Kyiv’s interest was publicly known. He blasted skeptics who voiced concern about offering Poland’s MiG-29 fighter jets to Ukraine, saying they’re “being cowed by Putin,” the Russian president.

In a phone call with The Intercept, Deptula reiterated his hawkish stance, arguing concern about conflict escalation “is being fed by the Russians through a very sophisticated information operations campaign to deter U.S. and NATO actions to assist the Ukrainians. Anything’s fair up to, but not including, the use of NATO forces in the conduct of hostile operations against the Russians.”

“Approve this, US Govt.,” Rep. Adam Kinzinger, R-Ill., tweeted last month when the Washington Post reported that Ukraine’s ambassador to the U.S. met with General Atomics. Notorious for calling on the U.S. to enforce a dangerous no-fly zone over Ukraine, Kinzinger, along with Reps. Ted Lieu, D-Calif., and Chrissy Houlahan, D-Penn., also asked the Defense Department to report on how long it would take to train a Ukrainian pilot to fly the MQ-9. This week, senior fellows from the General Atomics-funded Hudson Institute wrote an op-ed in The Dispatch endorsing sending Ukraine Reapers as well. And General Atomics sends lobbyists to Washington specifically to influence the strict export policy that the U.S. has enforced to limit the global proliferation of such dangerous drones.

The White House has shown an increased willingness to give Ukraine weapons as the war in Ukraine has dragged on and U.S. aims shift toward seeing a “weakened” Russia. Initially, it was only willing to give shoulder-fired missiles; backpack-sized drones called Switchblades strapped with grenades; and encrypted communications equipment. More recently, the administration has greenlighted heavy artillery weapons, armored personnel carriers, and longer-flying experimental drones called Phoenix Ghosts. Last week, President Joe Biden signed into law the first “lend-lease” program to accelerate military shipments since World War II, and this week, Democrats are trying to fast-track $40 billion to supply Ukraine with more arms and replenish the U.S.’s depleted stockpiles, at the expense of new Covid-19 relief spending.

Along the way, Kyiv and the U.S. defense industry have had a strong ally in the American media, which is constantly asking the administration why it’s not getting more involved. After the Washington Post reported on Ukraine’s discussions with General Atomics, Politico beckoned: “Ukraine wants armed drones. Is the U.S. ready to deliver?”

“It’s not every day that the United States approves the sale or transfer of armed drones to a foreign country — but Ukraine is hoping the Biden administration will heed the call of soldiers on the ground to do just that,” the story led.

If the government approves a deal, Ukraine would be one of only a few countries to receive Gray Eagles or Reapers. Unlike fighter jets such as the F-16, the U.S. hasn’t widely provided them because of an international agreement known as the Missile Technology Control Regime. Aiming to curb the spread of weapons of mass destruction, the nonbinding regime calls on exporters to use a “strong presumption of denial” standard when considering giving advanced drones like the MQ-9 to other countries.

However, following pressure from the defense industry, former President Donald Trump eased that burden in July 2020 as part of a broader effort to expand U.S. arms sales globally, opening the door for the State Department to authorize Reaper exports to the United Arab Emirates and Taiwan. The policy shift drew strong rebuke from members of Congress, who may now be tested with a transfer to Ukraine.

Describing the Trump administration’s policy shift, Sen. Bob Menendez, D-N.J., now chair of the Senate Foreign Relations Committee, said at the time, “This reckless decision once again makes it more likely that we will export some of our most deadly weaponry to human rights abusers around the world.” Sen. Chris Murphy, D-Conn., quickly teamed up with Sen. Rand Paul, R-Ky., and other Democratic and Republican senators on legislation to ban exports of advanced drones, except to NATO members and a handful of other close allies. Ukraine was not on the list.

Asked their positions on giving Ukraine the Reaper now, both Menendez and Murphy said they’d have to review the proposed deal first before taking a position.

General Atomics has already tried to clear up such questions. A company spokesperson told Forbes last month that motivated Ukrainian forces could undergo an expedited training period much shorter than the U.S. Air Force’s mandatory one-year lessons for drone pilots.

Paul, the Senate’s strongest critic of U.S. military assistance to Ukraine, warned about the risk of NATO getting drawn in further. “I do understand that there is a danger, and I haven’t fully concluded where I am on this, but you know, there is always the danger of escalation,” he said in an interview. (He added that he would be more comfortable if Ukraine paid for the weapons, but since MQ-9s cost tens of millions of dollars each, that is not likely.)

Bill Hartung, senior research fellow at the Quincy Institute for Responsible Statecraft, warned in an email to The Intercept that giving Ukraine armed Reapers would be a major step up from what the U.S. has already supplied. “In my view, Ukraine has the right to defend itself, and some weapons supplies are warranted on that basis,” Hartung wrote. “But supplying large, long-range drones would be a significant escalation in the types of systems supplied to Ukraine, and as such shouldn’t go forward without significant scrutiny by Congress.”

Members of Congress do have the authority to block an export, like when Paul introduced a motion to halt a missile sale to Saudi Arabia in November, which was voted down in the Senate. He distinguished that case from Ukraine, though. “Most of the battles that I’ve chosen on selling arms have been to countries where there’s a lot of people … who’ve talked about their human rights abuses,” Paul said, noting he hasn’t objected to deals with NATO allies. “Ukraine’s not NATO and I’m not a supporter of them being in NATO, but at the same time, I am sympathetic to their plight.”

Meanwhile, Ukrainian forces have reportedly used internationally banned cluster munitions during the current war, and have a sizable neo-Nazi faction. Ukraine is also home to one of the largest arms trafficking markets in Europe, meaning weapons sent to Kyiv could end up with unintended militias or in other conflicts abroad.

It’s not clear whether the State Department has made any formal moves toward a possible Reaper deal. Reporter Michael Peck, writing about the meeting between Ukraine and General Atomics, speculated in Forbes: “[I]t is unlikely that such talks between Ukraine and a U.S. defense contractor would have happened without a green light from the Biden administration.” A State Department official who requested anonymity said the agency cannot comment on possible arms transfers before formal notification to Congress. General Atomics spokesperson C. Mark Brinkley told The Intercept Tuesday that the company remains in close contact with Ukraine and U.S. government representatives.

Hartung warned that giving Reapers to Ukraine in service of weakening Russia, as stated by Defense Secretary Lloyd Austin, can especially be dangerous.

“A policy of trying to weaken Russia risks pushing Putin into a corner and increasing the risks of escalation of the conflict to a direct U.S.-Russia war, with all the risks that entails, including the possibility of the use of nuclear weapons,” he said.