The Republican governors claimed tenants no longer need aid to cover back rent accrued during the pandemic. But requests for funds remain high as residents struggle to stay housed. 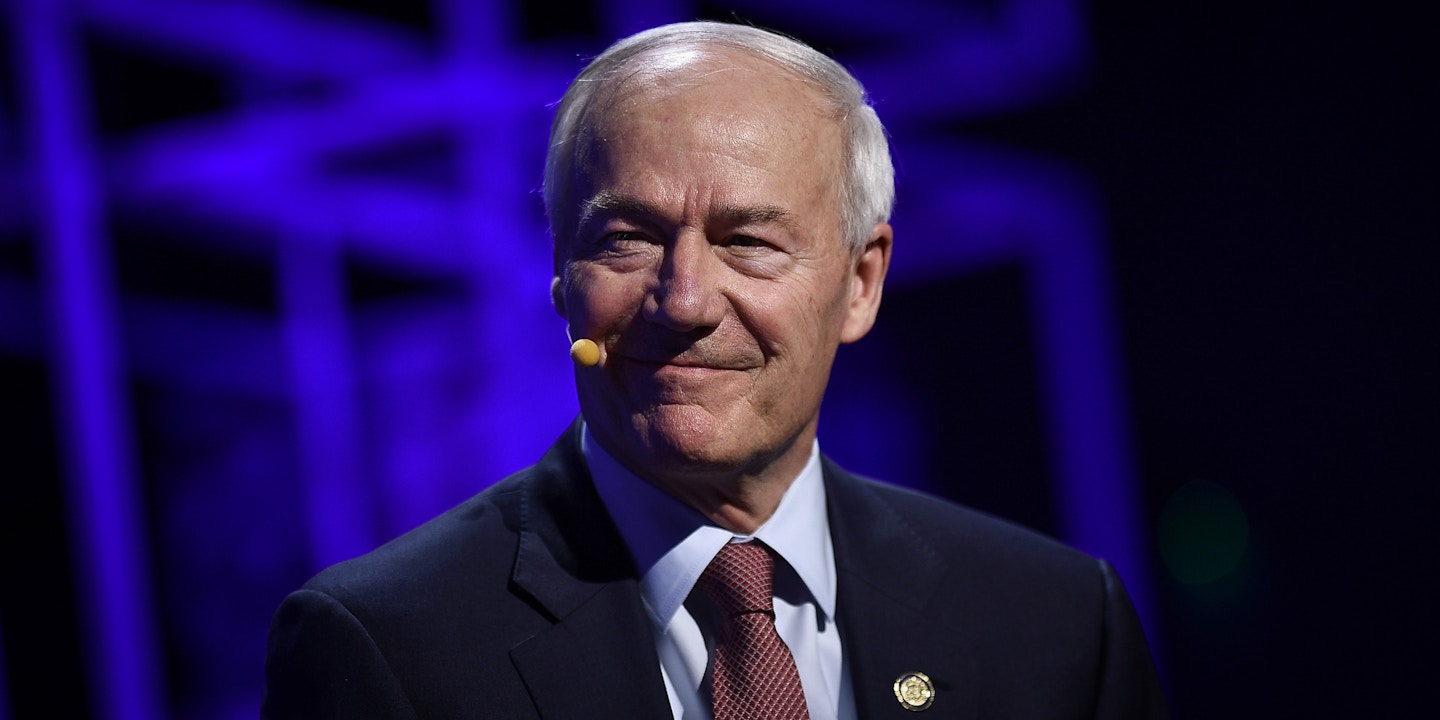 Earlier this year, Samantha Schilling and her fiancé fell behind by about $1,900 on rent for their home in North Little Rock, Arkansas. Schilling herself can’t work due to a serious back injury. Then, in March, her fiancé’s hours at a Dollar General store got cut back from a full-time schedule to two days a week.

So Schilling applied to receive federal rental assistance through her state. When they owed nearly $3,000 last year, the couple applied and received rental assistance to get caught up, so she assumed that she could do it again. If they had been able to get what they owed the second time around, their landlord would have let them stay. This time, though, the assistance did not come through. “There was none,” she said. Their landlord moved to evict them.

In May 2021, the Treasury Department announced that states would get another $21.6 billion in federal rental assistance. It was the second tranche of money made possible by the American Rescue Plan, intended to cover the back rent tenants owe after suffering financial hardship during the pandemic.

Two states, Arkansas and Nebraska, outright refused to accept that second round of money, leaving struggling renters without any help to stay housed.

Both Republican governors said that the help wasn’t necessary in their states. But their statements stood in sharp contrast to conditions on the ground. Arkansas and Nebraska residents were still struggling to make rent — and continue to do so, with no more federal help on the horizon.

“We definitely needed it,” said Mike Hornacek, the CEO of Together Omaha, an organization that was subcontracted by Nebraska to distribute federal rental assistance. “People are going to lose their housing, evictions are going to go up, which means the rate of homelessness is going to go up.”

In March, Nebraska Gov. Pete Ricketts announced that his state would turn down its share of the money. “[A]t a certain point, we must acknowledge that the storm has passed and get back to the Nebraska Way,” he said in a statement at the time. “We must guard against becoming a welfare state where people are incentivized not to work and encouraged to rely on government handouts well after an emergency is over.”

A month later, Arkansas Gov. Asa Hutchinson followed suit, claiming that the state had $6.7 million in remaining funds from the first round of rental assistance. Community activists, however, haven’t been able to tap the remaining funds, if they do still exist, and the state Department of Human Services stopped taking applications in April. “No one new can apply,” said Neil Sealy, executive director of the Arkansas Community Institute. “There’s just a lot of stuff that they said was there that just isn’t there.”

In the absence of rental assistance, evictions have been shooting up in Arkansas. By May, they had reached the highest rate in five years. As of June 30, there were 3,832 unlawful detainer evictions filed in the state this year, which doesn’t account for evictions filed under the state’s criminal statute or in small claims court. Sealy said, “It’s higher than it’s ever been.” And cases are moving forward.

In Pulaski County, which includes Little Rock, tenants only have five days to respond to an eviction summons to stave it off, so many people end up losing their housing quickly.

Samantha Schilling was one such fast-moving case. Schilling got the eviction summons only about three days before she had to file a response; she turned it in late, and the eviction moved forward. Four weeks later, the couple was locked out. They were told that the sheriff would arrive at 11 a.m., but a team of three was at her door at 9:30. Her family only got about 10 or 15 minutes to gather their belongings before they were forced to leave, grabbing necessities like a few outfits and medications, leaving behind most of their clothes and all of their furniture and appliances.

“It all happened really fast,” she said. After they left, the house was broken into and over $3,000 worth of their belongings were stolen, including her son’s brand-new set of bagpipes. They were given one day after that to go back, but they had to leave many of their belongings behind because they had nowhere to take them.

Instead of living in her family’s home of the last four years, Schilling, her fiancé, and their two sons, ages 10 and 11, are now living out of a Motel 6. Her family is getting some help from the American Legion to pay for the hotel room, but it’s still difficult to live there. The family cat is staying with a friend. Her sons both have mental health issues, including ADHD, and sometimes struggle to get along. “Keeping them occupied has been a real task,” Schilling said. One of her sons becomes destructive when bored. “It’s hard. It weighs on me greatly.” They sold their car to try to cover rent, and now her fiancé can’t get to his job at Dollar General. He’s trying to get a new job with a car dealership down the road.

“Last year we had to rely on the funds to get caught up. And this year we just don’t have them because [the governor] is not accepting them,” Schilling said. “It’s made me so mad that honestly I really just want to go over to the governor’s mansion and just post up.”

In explaining his decision to reject the federal money, Hutchinson cited Arkansas’s economic recovery. “Our economy has returned. There are jobs aplenty out there, and we have existing programs in place for rental assistance that were pre-pandemic,” he said. “We are back working to the same extent pre-pandemic, and we have the same opportunity moving up the economic ladder, so we need to move back to the same rental assistance we had before.”

Adrian Toston, a resident of Jacksonville, a suburb of Little Rock, just spent months out of work when orders for the home goods she was delivering dried up. Losing her income meant losing her car, and she had to file for Chapter 13 bankruptcy. “It’s been very, very tough,” she said. She’s been single parenting her two daughters, ages 12 and 5, since getting divorced in 2020.

She tried desperately to find another job and even got an offer at Amazon, only to find out that when the company ran a background check, a long-ago arrest for misdemeanor unauthorized use of a vehicle was incorrectly categorized on her record as property theft. “They see property theft, they’re not going to hire you,” she said. It wasn’t until another employer ran a background check and told her about the issue that she was able to file the paperwork and get it fixed. “It’s just been one thing after another,” she said.

When her previous work started to dry up in January, Toston applied for rental assistance, but she was declined despite her and her landlord sending in all the requested paperwork. She had to submit a second application, but despite calling every week for months to find out what was happening, she was declined again for supposedly failing to respond to an email she says she never got. “By then the government had already declined the rent relief,” she said. When she called to try to explain how much she needed help, she was told that the funds had run dry. “I was so devastated.”

Her landlord began the process of evicting her as soon as her second application was denied. She owes $3,500 in back rent, although she has been able to scrape together $1,500. She’s hoping that her landlord might let her work out an arrangement in which she can work toward paying it off. Her rent is $526 a month, and she worries that with rents rising so quickly she won’t be able to find anything else that affordable in her area. Not to mention that her daughters love their apartment, where they have their own bedrooms.

“It’s not that I’m not trying to work or anything,” she said, but without some help, she knows she may very well lose her apartment. She’s started moving her things out so she and her daughters can stay with her mother in her two-bedroom apartment until Toston can find another place. “My girls, they are not ready for that,” she said. “It’s going to be tough.” There are many more like Toston in Arkansas, Sealy, of the Arkansas Community Institute, said. “We’ve had two years of pandemic economic problems,” he said. People who lost jobs early on are still in a financial hole, as are people who have gotten Covid-19 and had to quarantine without pay. “Even if you are working, you still have a huge debt burden.” Now, rising costs are burdening families too.

“The requests for help and the amount of funds that we’re still distributing is at a level that’s equal to or potentially higher than what we’ve seen during the peak of the pandemic.”

“If the trend continues, we’ll have just a huge number of people who will have that eviction mark,” Sealy said. That will make it harder for them to find housing, which is already challenging with rising rents, little availability, and high application fees. “Every day that goes by that we don’t have [more rental assistance], the number of people without stable housing increases.”

The need for rental assistance is just as high in Nebraska. “The requests for help and the amount of funds that we’re still distributing is at a level that’s equal to or potentially higher than what we’ve seen during the peak of the pandemic,” said Together Omaha’s Hornacek. “It hasn’t slowed down at all.” In fact, his organization distributed over three times as much rental assistance in the second quarter of this year than it did in the first, helping over 800 people in those three months alone. Low-income people were hit especially hard by the pandemic, he noted, and many haven’t recovered yet. And just as some were getting back on their feet, they’ve had to deal with soaring inflation.

Since January, Together Omaha has distributed over $5 million in aid from the first round of federal assistance, and all five of the organizations handing it out in Omaha gave about $8 million in May alone. But the first round of money is only available through September 30 — Hornacek doubted it would last that long.

“Not having access to those extra funds, in my opinion, is going to do a lot of harm to our community and those we serve,” he said. “We’re still going to be asked to do what we’ve been doing,” helping people who can’t afford their rent, “yet there’s no funding for us to be able to do it.”

Ricketts’s rejection of the funds, he said, felt like “a slap in the face.”