The injunction against a law banning gender-affirming medical care for trans children holds lessons for the moderates who have enabled GOP bigotry. 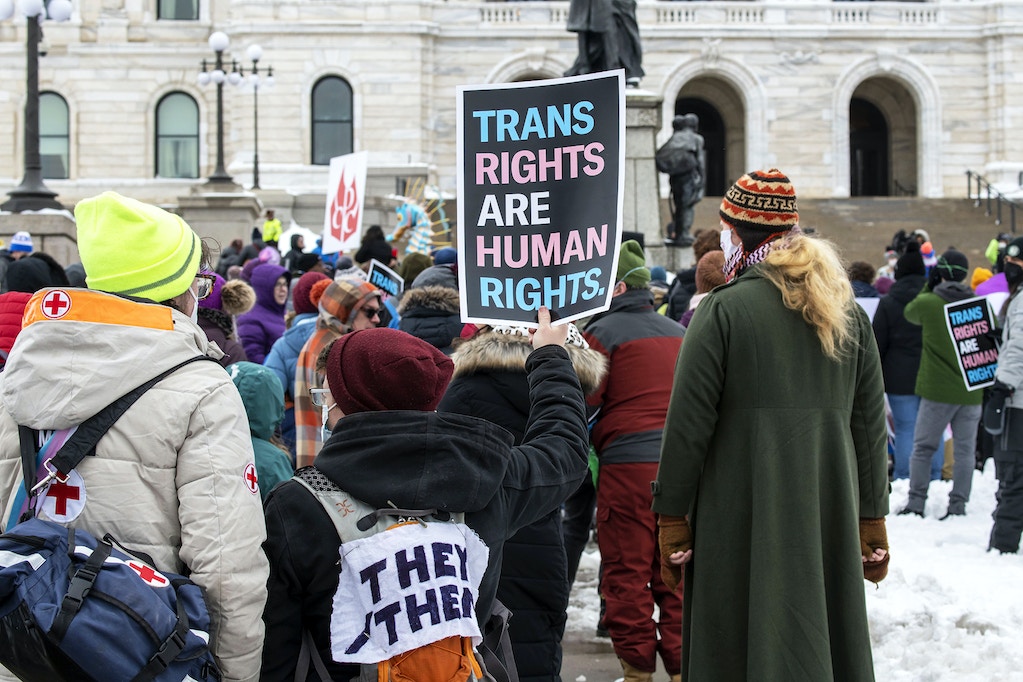 A three-judge panel of the 8th Circuit Court of Appeals — considered one of the most conservative, least diverse federal courts in the country — upheld a district court’s injunction blocking enforcement of the law. The court held in its decision that, if enforced, Arkansas’s ban would cause “irreparable harm” to trans young people and their loved ones and would prohibit “medical treatment that conforms with the recognized standard of care.”

In the fight for trans rights, the 8th Circuit decision is a victory, but it is a small one.

In the fight for trans rights, the 8th Circuit decision is a victory, but it is a small one — serving only as a reminder of the struggle that lies ahead. Trans adults and children nationwide remain at grave risk from Republicans’ furious eliminationist assault. In the last year, over 200 hundred anti-trans bills were introduced in over 30 states, which are passing through legislatures at a frightening pace, many taking aim at children’s health care. These bills have, of course, never been about protecting children: They constitute a national movement attacking the very existence of all trans people.

Amid this landscape, last week’s ruling — the first of its kind in a federal appeals court — is significant. As an injunction, though, it is temporary, offering only short-term reprieve and only in one state. Nonetheless, the relief it provides will be very real. For one, the ruling permits trans kids in Arkansas to continue or begin their crucial treatment while legal challenges to the ban proceed. (The state is seeking a review of the injunction, and the case against the ban — brought by four trans youths, their parents, and two doctors — is scheduled for trial in October.)

Beyond this necessary temporary protection, the decision — from a conservative court no less — offers a formal rebuke to the GOP’s bad-faith justifications for its crusade against trans lives.

Republicans and their far-right base will not stop aggressively pushing anti-trans laws, regardless of their unconstitutionality or illegality. As we have seen with the GOP’s successful — and related — decimation of reproductive freedoms, the right is more than happy to wield its power to forge new legal realities.

If the right cannot be convinced, it is so-called moderates and trans-exclusionary feminists parroting right-wing talking points who should take note: Even conservative courts are recognizing such efforts as harmful, discriminatory, misaligned with scientific consensus, and — notably — organized around right-wing aims to create a specific type of exclusionary body politic.

The Arkansas ban, Act 626, seeks to prohibit all trans-affirming health care for minors, defined as “any medical or surgical service” — the latter being exceedingly rare in the case of children — “including without limitation physician’s services, inpatient and outpatient hospital services, or prescribed drugs.” It would also mean that trans young people currently taking hormone treatment in the state would have to stop. The state’s Republican governor, Asa Hutchinson, vetoed the bill, calling it a “vast government overreach,” but a fervid Republican-led legislature overrode the veto.

Before the ban could go into effect, the American Civil Liberties Union filed a lawsuit on behalf of the plaintiffs, arguing that the law violates the equal protection clause of the 14th Amendment and discriminates based on sex. Now both a federal district court and an appeals court have deemed that the plaintiffs have demonstrated “a likelihood of success on the merits of their equal protection claim.”

This should be obvious: Act 626 denies certain health care treatments on the basis of sex assigned at birth.

It should be clear, too, as the appeals court recognized, that the Arkansas government’s claim of “compelling government interest” in “protecting children from experimental medical treatment and regulating ethics in the medical profession” is specious. As has been repeated ad nauseam, gender-affirming medical care for trans minors is supported by every major pediatric medical association — a point highlighted in the appeals court ruling.

“This is hugely important as a practical matter and doctrinally,” wrote Chase Strangio, an ACLU attorney representing the plaintiffs in this case, on Twitter. He noted that “the court (as all courts to consider the issue have) finds that the purported justifications for banning this care are without merit.”

As Strangio noted, the 8th Circuit ruling is not an outlier; lower courts in Alabama and Texas have placed injunctions on anti-trans laws against children’s health care. This should not, however, suggest that we can rely on the courts alone to stop the extraordinary number of anti-trans legislative attacks: There are an immense number of cases to fight, and the far-right Supreme Court remains a terrifying site for the judicial buck to stop.

Yet every legal victory is a lifesaving necessity for trans children and adults. With hope, the framing of the Arkansas injunction sets a broader precedent. In its original ruling to halt the ban, the district court made the important determination that the purpose of Act 626 is “not to ban a treatment [but] to ban an outcome that the State deems undesirable” — a conclusion cited verbatim by the appeals court.

This should not be overlooked: It is a tacit recognition by the courts that Republicans deem the existence flourishing trans people — the outcome of gender-affirming treatment — to be undesirable. The fact that numerous new anti-trans laws aim to also ban gender-affirming care for adults gives the lie to the purported motives of these bills’ supporters.

It is the desire for the elimination of trans people that informs the right-wing focus on trans kids. Calling on that most conservative figuration — the imperiled cis, white child — the right targets living, breathing trans children, a demographic with the fewest capacities and resources with which to fight back. The trans kids fighting this onslaught in courts, in classrooms, and in the streets continue to show immense resilience; they deserve fierce, mass public support, and it is no less than shameful that their struggle is sidelined by certain leftists as a culture-war distraction.

If even conservative courts can see the ideological grounding and harmful consequences of this Republican effort, there can be no excuses made for the complicit liberals.