Federal Reserve Chair Jerome Powell insists he won’t cause a deep recession but that “pain” is necessary to fight inflation. 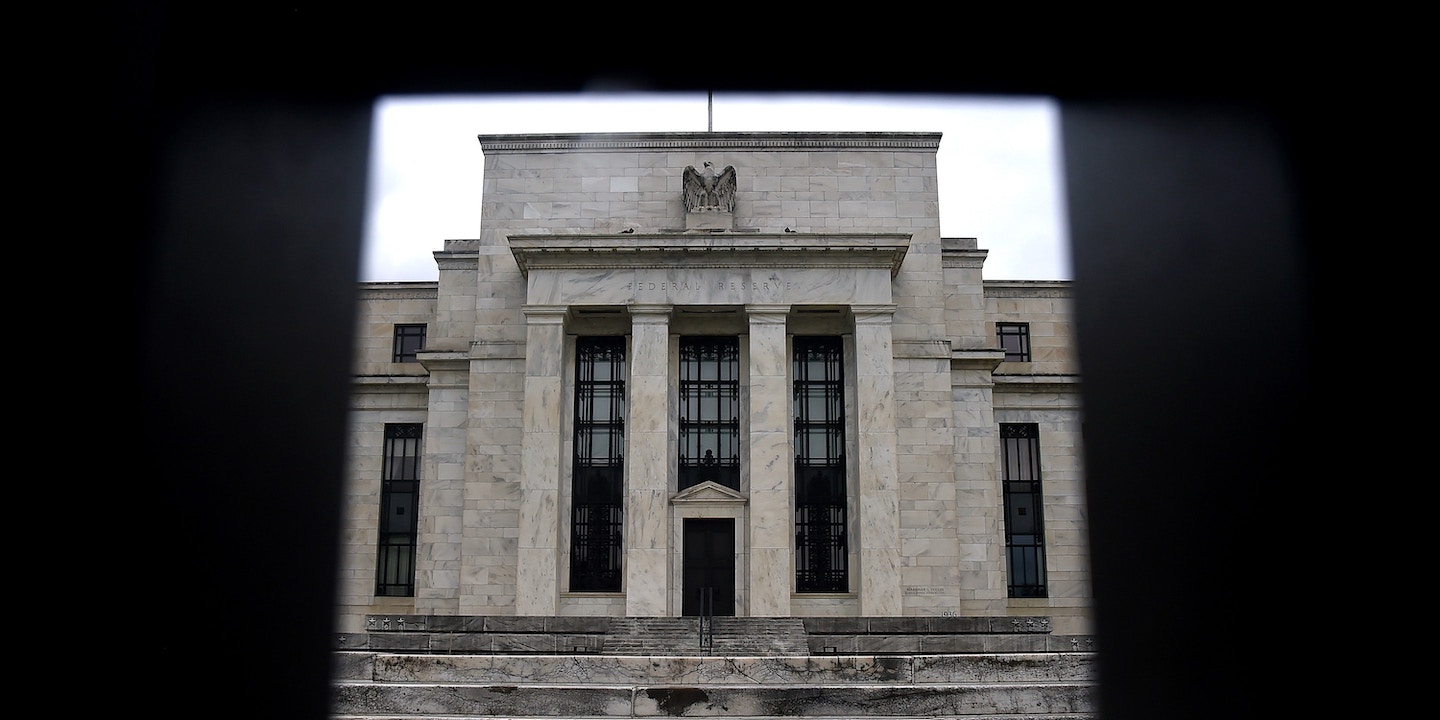 On Thursday, following reports that the Federal Reserve would likely soon jack up the federal interest rate again — this time by 0.75 percentage points — Chair Jerome Powell tried to allay fears that the Fed’s strategy would cause an economic downturn, insisting that another rate hike was unlikely to cause a deep recession.

The interest rate hikes, which nominally serve as a way for the Federal Reserve to tamp down inflation, are also a way to put economic power back in the hands of the very rich by driving up unemployment, since higher interest rates make it more expensive for banks to loan people money, leading to scarcer investment and therefore fewer jobs.

Powell downplayed the effect the Federal Reserve’s moves were likely to have on working people. “We think we can avoid the very high social costs that Paul Volcker and the Fed had to bring into play to get inflation back down,” Powell said, referring to the period in the 1980s when the Fed similarly hiked interest rates and engineered a recession.

The Fed’s own research suggests otherwise. Powell’s remarks reflect an attitude common among financial elites that the Fed can execute a “soft landing” in which enough pain can be inflicted on the economy to reduce inflation but not so much that the economy slides into recession. But an extraordinary yet little-noticed Federal Reserve study undercuts the exact case Powell is trying to make — published while he was making it. The study warns that the Fed’s aggressive interest rate hikes this year echo a strategy it undertook a century ago that led to a depression because the Fed did not account for how quickly unemployment can spike in response to rate hikes.

“Strong (tight) labor markets can become weak (slack) faster than policymakers may anticipate,” the authors write. “Indeed, our results demonstrate that labor demand reacted sharply and quickly to the tightening of monetary policy, at a speed which can outpace policymakers’ abilities to track current economic conditions.”

The study, published July 27 by the Federal Reserve Board of Governors, looks at the depression of 1920, the circumstances of which are eerily similar to today. The Federal Reserve Board, the main governing body of the Fed, has over 400 economists who conduct research for consideration by other economists, a board spokesperson, Joseph Pavel, explained.

The U.S. had just come out of a pandemic — the Spanish flu — that killed 657,000 Americans. Since many of those who died were workers, this meant that there were more job openings than workers to fill them, granting the surviving workers more bargaining power. “A tight labor market naturally led to high employment and rising real wages,” the study notes. (Though the study doesn’t mention it, labor strikes were also proliferating, spurred by the low unemployment rate.)

Like today, consumer spending was also recovering — then because World War I had ended; now because the disruptive effects of the coronavirus pandemic are wearing off. Despite the strong job market, inflation was also relatively high, and for similar reasons. “At the end of World War I, the United States was experiencing strong growth and unruly inflation, driven in part by an expansionary fiscal policy and an accommodative monetary policy,” the study observes.

In March 2020, the U.S. government likewise responded to the plunging economy brought on by the pandemic with an unprecedented financial stimulus package in the form of the $2 trillion Coronavirus Aid, Relief, and Economic Security Act — “expansionary fiscal policy,” to borrow the study’s words — while the Fed kept interest rates at historic lows — “accomodative monetary policy.” Together, these policies averted an economic downturn.

While the Fed’s aggressive policy in 1920 did succeed in tamping down inflation, the study found that it also had a devastating effect on workers. “In 1920, the Federal Reserve Banks hiked their discount rates to tame inflation, and the U.S. economy entered a severe recession, now known as the Depression of 1920,” the study says, drawing on labor market data that was only systematically assembled in recent years. The result was that “labor demand sharply contracted, with manufacturing and other industrial sectors leading the way with large reductions in job vacancies.”

Asked how the Fed squares its rate hikes with the contrary findings of its own study, Pavel, the spokesperson for the Fed Board of Governors, pointed to a disclaimer on the study that states, “The analysis and conclusions set forth are those of the authors and do not indicate concurrence by other members of the research staff or the Board of Governors.” The study’s authors, Jin Wook B. Chang, a Federal Reserve Board of Governors senior economist, and Haelim Anderson, a Federal Deposit Insurance Corporation economist, did not respond to requests for comment.

Though the authors of the study aren’t opposed to Fed interest rate hikes wholesale, they caution against using rate hikes in rapid succession — as the Fed is currently doing — due to the delay it takes for the economic effects of rate hikes to register.

In December 1919, the Federal Reserve Bank of New York hiked interest rates from 4 percent to 4.75 percent and then, in June 1920, all the way up to 7 percent. The study explains what happened next: “As the Federal Reserve Banks were increasing rates, a sharp, deep recession began in 1920 lasting until 1921,” the study says. “Up to that point, the recession was one of the deepest measured and is still often referred to as the Depression of 1920. Manufacturing production declined by 22 percent, and unemployment rate rose by 11 percent, from 5.2 percent to 11.3 percent.”

The warning seems prudent in light of the fact that the U.S. gross domestic product just contracted for a second consecutive quarter — the traditional definition of a recession.

The Federal Reserve has hiked rates four times this year so far: in March, May, June, and July, cumulatively bringing the federal interest rate from 0.25 percent to between 2.25 percent and 2.5 percent. These represent the first rate increases since 2018; the hike in June was the largest rate hike since 1994. During his closely watched annual address at the Jackson Hole Economic Symposium late last month, Powell indicated that the rate hikes would continue. “Reducing inflation is likely to require a sustained period of below-trend growth. Moreover, there will very likely be some softening of labor market conditions,” the Fed chair said. “While higher interest rates, slower growth, and softer labor market conditions will bring down inflation, they will also bring some pain to households and businesses. These are the unfortunate costs of reducing inflation.”

By contrast, the Federal Reserve hiked rates in smaller increments of 0.25 percent on seven occasions between 2017 and 2018, reaching 2.25-2.5 percent by December 2018 — the same rate levels we’re at today. Then-President Donald Trump responded by launching a relentless pressure campaign to get the Fed to lower rates, going so far as threatening to fire Powell. By August 2019, the Fed began to reverse course, gradually slashing interest rates until March 2020, when it rapidly dropped the rate to nearly zero, where it remained until earlier this year.

Powell has been plenty candid about his intentions, declaring his desire “to get wages down and then get inflation down.”

President Joe Biden has shown no such willingness to publicly criticize the Fed, an institution that, much like the Supreme Court, has historically styled itself as above the political fray. In May, Biden vowed “never interfere with the Fed’s judgments, decisions, or tell them what they have to do.” Biden came under criticism by progressives for reappointing Powell, a registered Republican first appointed Fed chair by Trump. Sen. Elizabeth Warren, D-Mass., opposed Powell’s renomination, calling him “a dangerous man to head up the Fed.”

“Renominating you means gambling that for the next five years, a Republican majority at the Federal Reserve, with a Republican chair who has regularly voted to deregulate Wall Street, won’t drive this economy over a financial cliff again,” Warren told Powell while he testified before the Senate Banking Committee in September 2021.

Powell has been plenty candid about his intentions, declaring his desire “to get wages down and then get inflation down” at a press conference in May. As Powell sees it, worker pay is too high. “Wages are running high, the highest they’ve run in quite some time,” Powell said. “And they are one good example of — or good illustration, really — of how tight the labor market really is, the fact that wages are running at the highest level in many decades.”

Anxiety among financial elites about the tight labor market — i.e., workers having some relative leverage — has scarcely been concealed. Also on Thursday, Larry Summers, a top economist in both the Obama and Clinton administrations, said that tackling inflation “will likely require a significant recession.” In recent months, Summers has also called for a 10 percent unemployment rate — a figure that would mean putting millions of Americans out of work.

In a corporate earnings call last month, the CEO of the multibillion-dollar real estate company Douglas Emmett remarked that a recession could be “good” for the commercial real estate business “if it comes with a level of unemployment that puts employers back in the driver seat,” as The Intercept reported. Though recessions can be bad for business in many ways, they’re great for crushing growing labor power.

While it’s true that inflation hurts workers by making consumer goods more expensive, inflation disproportionately hurts the rich and benefits debtors. The effects of inflation are not evenly felt across the board. For example, wage hikes are outpacing inflation in some of the lowest-paid jobs, like leisure and hospitality workers. What’s more, the minimum wage hasn’t kept pace with inflation for decades.

This summer, Warren again raised alarm about Powell, this time over the risks of the Fed’s rate hikes, warning that the decision to increase rates “risks triggering a devastating recession.”

According to the Fed’s own research, Warren is correct.