The coronavirus pandemic relief bill passed by the House of Representatives this week would raise the federal minimum wage in steps until it reached $15 an hour in 2025. But an increase in the minimum wage has been removed from the Senate’s legislation. At least for now, it is stuck at $7.25.

This is bad enough in itself, but even worse is that almost no Americans understand how low we’ve allowed our aspirations to become. Our country’s productivity gains in recent decades should have translated into a minimum wage today of $24 an hour — and by 2025, it should be almost $30.

This may sound preposterous. But in fact, U.S. society was once on a path to this destination. We simply chose to step off that path.

From both a moral and practical perspective, the minimum wage should go up in step with the productivity of the U.S. economy — that is, our ever-increasing ability to create more wealth with the same amount of work. Morally, as a country grows richer, everyone should share in the increased wealth. Practically, companies that sell things need lots of people with the money to buy them.

We know that this can work because it already did. During the 30 years from the establishment of a minimum wage in 1938 to 1968, Congress repeatedly upped the minimum wage so that it did in fact go up hand in hand with U.S. productivity. By the end of that period, it was worth the equivalent of $12 per hour today.

Since 1968, American productivity has substantially increased. Dean Baker, senior economist at the Center for Economic and Policy Research, points out that if the minimum wage had gone up at the same rate, it would now be over $24. At that level, as Baker says, a couple who both worked full time at minimum-wage jobs would take home $96,000 a year. Baker also calculates that by 2025, rising productivity would bring the minimum wage close to $30 an hour.

But instead we’ve gone in the other direction. After the late 1960s, Congress stopped raising the minimum wage in step with productivity. Instead, over the past 50 years, Congress has allowed the minimum wage to plummet in real terms. That is, minimum-wage workers of the past were actually paid more than minimum-wage workers make today — even though today’s workers live in a much richer society.

Indeed, since 1950, the hourly minimum wage has almost never been lower than it is now. Of course, 1950 is literally a lifetime ago, and the U.S. is now a completely different country. Our per capita gross domestic product is now four times greater. A UNIVAC computer of the time was 38 feet long, weighed eight tons, and had about 1/1,000,000 of the memory of today’s cheapest iPhone. 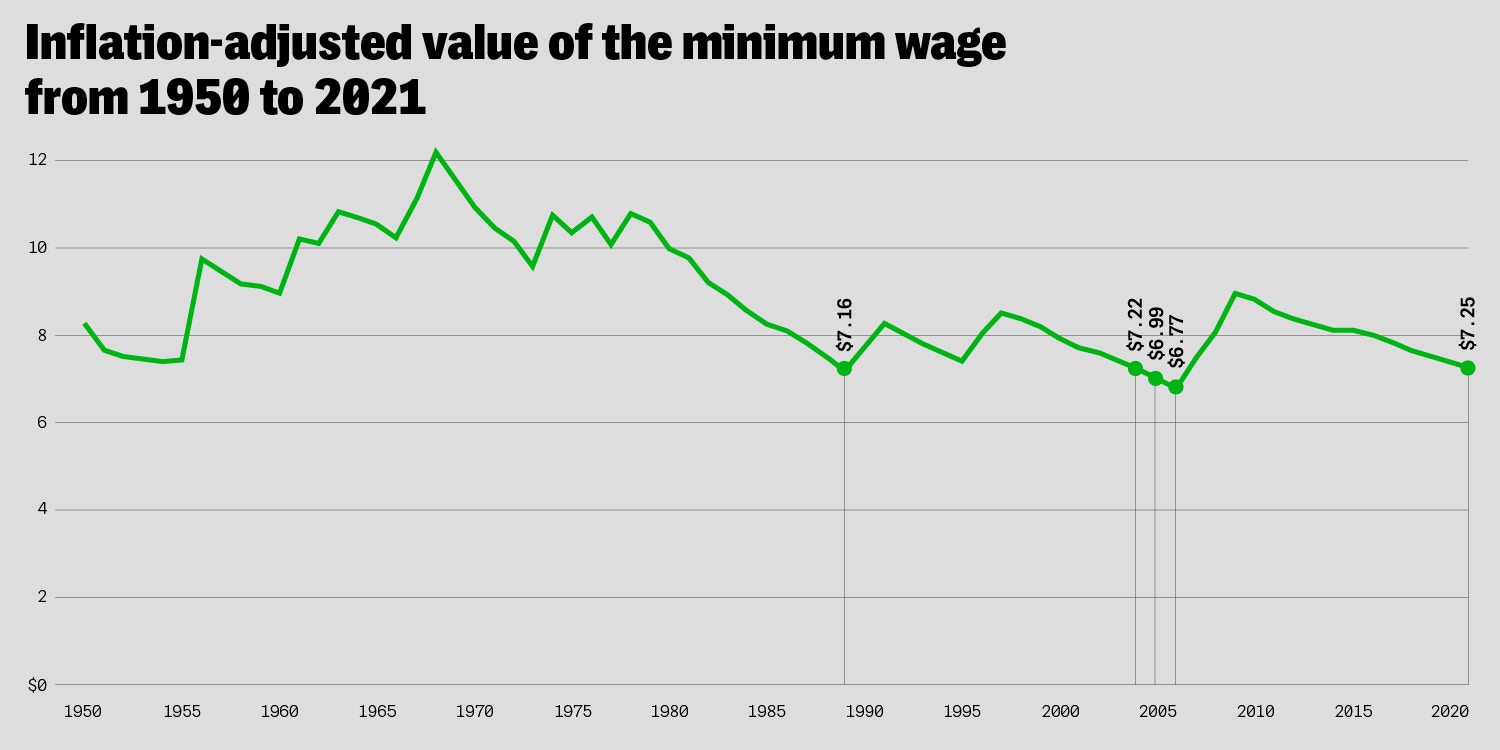 The real value of the congressionally mandated federal minimum wage has fluctuated over the past 71 years. Source: Center for Economic and Policy Research.

The first federal minimum wage was established in 1933 with the passage of the New Deal’s National Industrial Recovery Act. It was soon struck down as unconstitutional by the era’s ultra-right Supreme Court. President Franklin D. Roosevelt then ran for reelection in 1936 promising to keep fighting for a federal minimum wage. By contrast, that year’s Republican platform conspicuously did not call for one, although it did piously allow that it might be okay if individual states created minimum wages for women and children.

Roosevelt’s landslide victory intimidated conservative Justice Owen Roberts enough that he reread the Constitution and realized that in fact it does allow the federal government to set a minimum wage. He switched sides in a 1937 minimum-wage case, clearing the way for the passage of the Fair Labor Standards Act in 1938.

The Fair Labor Standards Act set the minimum wage at 25 cents per hour. Adjusted for inflation, that’s about $4.60 today. Tellingly, this was a compromise with Southern senators: The original version of the bill would have established a minimum wage of 40 cents per hour, the equivalent of about $7.37 now.

The minimum wage only made it to 40 cents by 1945. It then was almost doubled when President Harry Truman signed a bill at the start of 1950 increasing it to 75 cents, worth $8.25 today after adjusting for inflation.

What happens now is unclear, but certainly the situation doesn’t look good for any significant minimum-wage changes. The Senate parliamentarian ruled that minimum-wage provisions cannot be passed via the budget reconciliation process, which only requires 50 votes, and the Biden administration has refused to use its power to ignore the parliamentarian. And House Speaker Nancy Pelosi, D-Calif., has said that the two versions will not go to conference committee to be reconciled. Instead, the House will simply pass the Senate bill and send it to President Joe Biden for his signature.

Democrats can now try to pass a stand-alone increase in regular order over a GOP filibuster, but that would require all of the Democratic senators and 10 Republicans, which is difficult to imagine. They could also change Senate rules to eliminate the filibuster, something that seems equally unlikely.

So for the moment, it appears that America’s worst-paid workers have been abandoned yet again by the federal government. But let’s not pretend this isn’t a choice we’re making. Any time we want, we can choose to get back on the path to a different, fairer, better country.