Backers of a war powers resolution say that a strong vote in the Senate will send a signal to Saudi Arabia that it does not have a free hand to restart hostilities. 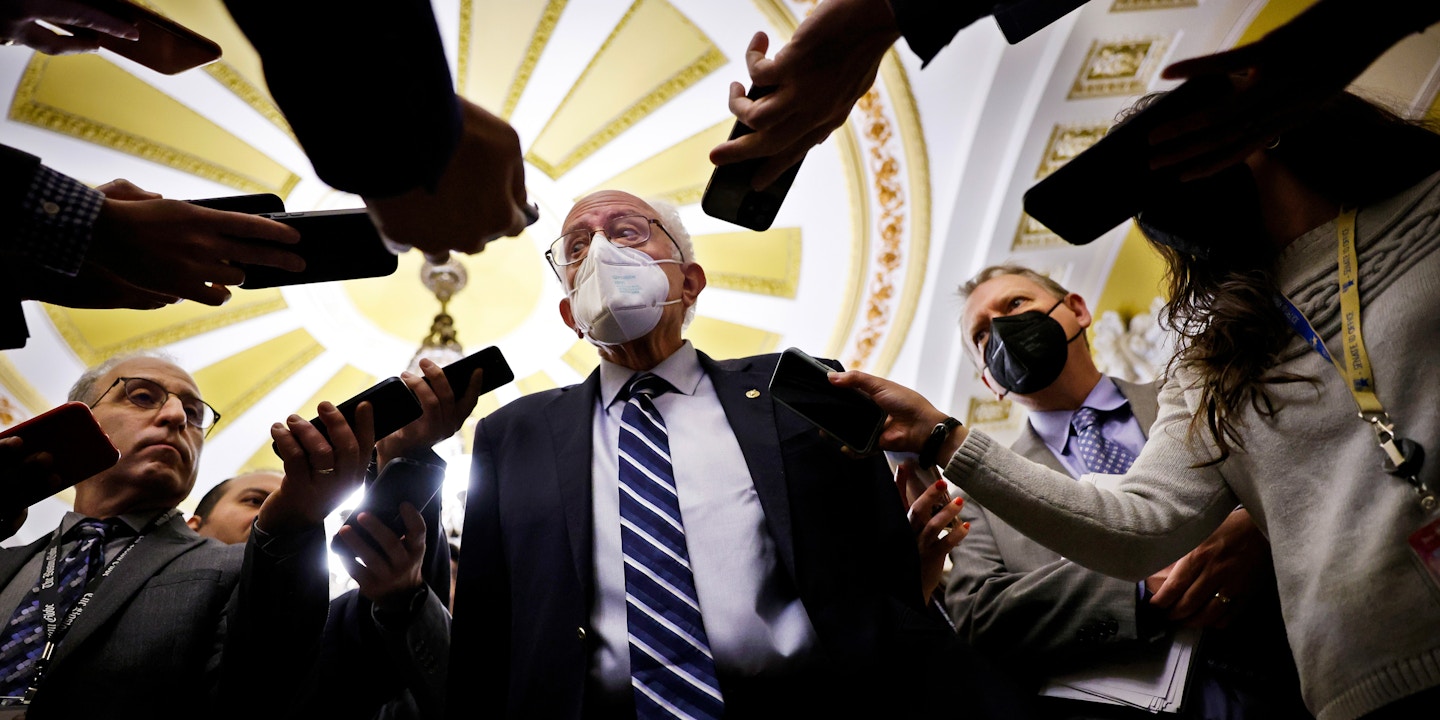 Sen. Bernie Sanders is moving toward a vote “hopefully next week” on a war powers resolution aimed at blocking U.S. support for the Saudi-led war in Yemen, the Vermont senator told The Intercept on Monday.

An agreement for a ceasefire in Yemen between the Saudi-led alliance and the Houthis, who are backed by Iran, has expired, though both sides have tenuously maintained the peace. Backers of a war powers resolution say that a strong vote in the Senate in the lame duck will send a signal to Saudi Arabia that it does not have a free hand to restart hostilities, despite the Biden administration’s more placating posture amid its hunt for lower oil prices.

A war powers resolution is “privileged” in the Senate, which means that the sponsor of it can bring it to the floor for a vote without the need for approval by the chamber’s leadership once a certain amount of time has elapsed. At that point, the resolution has “ripened,” and the one sponsored by Sanders is now ripe.

Asked whether Sanders expected to have the votes to pass the resolution, Sanders said, “I think we do, yes.”

In 2019, Congress advanced a bipartisan version of the current Yemen war powers resolution, only to see it vetoed by President Donald Trump.

Sens. Bob Menendez, D-N.J., and Lisa Murkowski, R-Alaska, who both supported earlier versions of the bill, said they hadn’t seen draft text of the latest version of the resolution, and wouldn’t commit to how they would vote if Sanders brings the resolution to the floor. “I was not aware that it was on the docket next week,” Murkowski told The Intercept. (It’s not officially on the docket yet.)  “I hadn’t heard that, I guess we’ll find out. I’m going to take a look at it.” Sen. Jon Ossoff, D-Ga., also said he would “review it in full” before a vote.

Menendez, chair of the Foreign Relations Committee, has previously called for a “freeze” in U.S. military support for Saudi Arabia. “The United States must immediately freeze all aspects of our cooperation with Saudi Arabia, including any arms sales and security cooperation beyond what is absolutely necessary to defend U.S. personnel and interests,” he said in October. “As Chairman of the Senate Foreign Relations Committee, I will not green-light any cooperation with Riyadh until the Kingdom reassesses its position with respect to the war in Ukraine. Enough is enough.”

Also in October, John Kirby, the White House national security spokesperson, responded to Saudi Arabia’s effort to jack up gas prices by questioning the solidity of the relationship between the two countries, saying the administration was prepared work with Congress “to think through what that relationship ought to look like going forward.”

President Biden, he said, is “going to be willing to start to have those conversations right away. I don’t think this is anything that’s going to have to wait or should wait, quite frankly, for much longer.” The resolution gives Biden a post-fist-bump opportunity to have that conversation.

On Wednesday, a coalition of groups pushing to end the war in Yemen plan to release a letter to Congress calling for a WPR vote during the lame duck. On Tuesday, the House Foreign Affairs Committee holds a hearing on the issue. The House version is sponsored by outgoing Rep. Peter DeFazio, D-Ore., and needs the support of Rep. Jim McGovern, D-Mass., to get through the Rules Committee. McGovern is a co-sponsor of the resolution, as is Rep. Adam Schiff, D-Calif., chair of the House Intelligence Committee. In the Senate, it’s co-sponsored by Sen. Dick Durbin, D-Ill., who is not just the chamber’s No. 2, but also serves as chair of the Appropriations subcommittee that doles out Pentagon funding.

Next Wednesday, the House will be holding a public briefing, chaired by Rep. David Cicilline, a Democrat of Rhode Island, titled “Public Members Briefing on Navigating the Political and Humanitarian Landscape in Yemen: A Conversation with Civil Society on Paths Forward for Congress.” The primary path forward for Congress is a war powers resolution, though advocates are also pushing for restrictions on war-making in the National Defense Authorization Act, which must pass by the end of the calendar year.

The resolution will also be put forward at a complicated moment for Biden’s relationship with Saudi Arabia. Though Saudi Arabia has used its oil exports as a cudgel to attack the current administration which it views as opposed to its own economic interests and human rights record, relations began to thaw last month. The Biden administration moved to grant sovereign immunity to Crown Prince Mohammed bin Salman in the lawsuit over journalist Jamal Khashoggi’s death, angering advocates.

“No amount of U.S. support for Saudi and UAE’s war on Yemen should be acceptable.”

Hassan El-Tayyab, legislative director for Middle East policy at Friends Committee on National Legislation, said the war powers resolution could pressure Saudi Arabia. “By removing the possibility of more U.S. support for Riyadh and its partners to renew airstrikes in Yemen, Congress can play a constructive role to keep the pressure on the Saudis to negotiate an extension of the truce,” said El-Tayyab.

The war between Russia and Ukraine, in which the U.S. has been supporting Ukraine without a declaration of war, may complicate the politics of the resolution. Some of the language as applied to Yemen could arguably apply equally to the war in Ukraine — though the resolution specifies that only Yemen-related activity is covered, Congress is under no obligation to be consistent in their interpretation, and U.S. support of Ukraine is restricted to defensive operations inside the country’s borders, whereas Saudi Arabia has been conducting its war inside Yemen.

The resolution defines “hostilities” in a number of ways, including “sharing intelligence for the purpose of enabling offensive coalition strikes” and “providing logistical support for offensive coalition strikes, including by providing maintenance or transferring spare parts to coalition members flying warplanes engaged in anti-Houthi bombings in Yemen.” That definition is legally safe in Ukraine, as there is no evidence the U.S. is helping Ukraine target Russia inside Russia’s own borders, and any strikes of occupying forces can reasonably be deemed defensive. Saudi Arabia, meanwhile, has waged a relentless — though now paused — bombing campaign inside Yemen, one which is impossible to call defensive because it long predated the Houthis more recent returning of fire into Saudi Arabia.

The second definition of hostilities reads:

The assignment of United States Armed Forces, including any civilian or military personnel of the Department of Defense, to command, coordinate, participate in the movement of, or accompany the regular or irregular military forces of the Saudi-led coalition forces in hostilities against the Houthis in Yemen or in situations in which there exists an imminent threat that such coalition forces become engaged in such hostilities, unless and until the President has obtained specific statutory authorization, in accordance with section 8(a) of the War Powers Resolution.

As The Intercept has reported, U.S. special operations personnel have played an active role in Ukraine under a presidential covert action finding, though such covert action has long been understood not to trigger Congress’s war powers jurisdiction, for better or for worse. Some of the most vocal supporters of U.S. support for Ukraine — such as Schiff and Sens. Richard Blumenthal, D-Conn., and Sheldon Whitehouse, D-R.I. — are also cosponsors of the Yemen war powers resolution.

Despite the ceasefire lapsing in October, the Saudis have yet to resume bombing. Anti-war advocates believe the Saudi hesitation flows from a concern that opponents of the war in Washington would get an upper hand at the first report of civilian casualties from a renewed campaign of bombing in a war that has stretched on for some seven years. The Saudis continue to maintain a blockade of Yemen, strangling the country’s economy and producing a humanitarian crisis of biblical proportions.

“While the situation in Yemen remains volatile, no amount of U.S. support for Saudi and UAE’s war on Yemen should be acceptable,” said Shireen Al-Adeimi, a Yemeni American academic who has been active against the war. “Whether a truce is re-negotiated or not, Congress needs to assert its constitutional authority over war-making under the Biden administration just as they did when Trump was assisting the Saudi-led coalition.”

Sanders called for a vote to be held Tuesday evening, December 13. The White House, according to sources involved in the fight over the resolution, is urging senators to vote against the resolution. The White House is arguing that a vote in favor is unnecessary because, despite the lapse of the ceasefire, significant hostilities have not yet resumed, and the vote will complicate diplomacy. They are also arguing that Biden has made significant progress in reducing violence and re-opening ports and airports, so his judgment should be respected and the resolution rejected. And finally, the White House has warned that some of the arguments being made could complicate the effort to back Ukraine in its war against Russia. A White House spokesperson did not immediately respond to a request for comment.

Sen. Chris Murphy, D-Conn., chair of the Senate Foreign Relations subcommittee with jurisdiction over U.S. support for the war, denounced the conflict in a series of statements posted online Thursday.

Today the Senate will vote on a resolution to curtail further U.S. support for the war in Yemen.

The war has been a total national security disaster for America, and it's time to send the strongest signals to Saudi Arabia and UAE that this war must end.https://t.co/bOLUOAQwkk