After being shut down by local protesters, Ducey told a federal judge he would remove the shipping container wall. 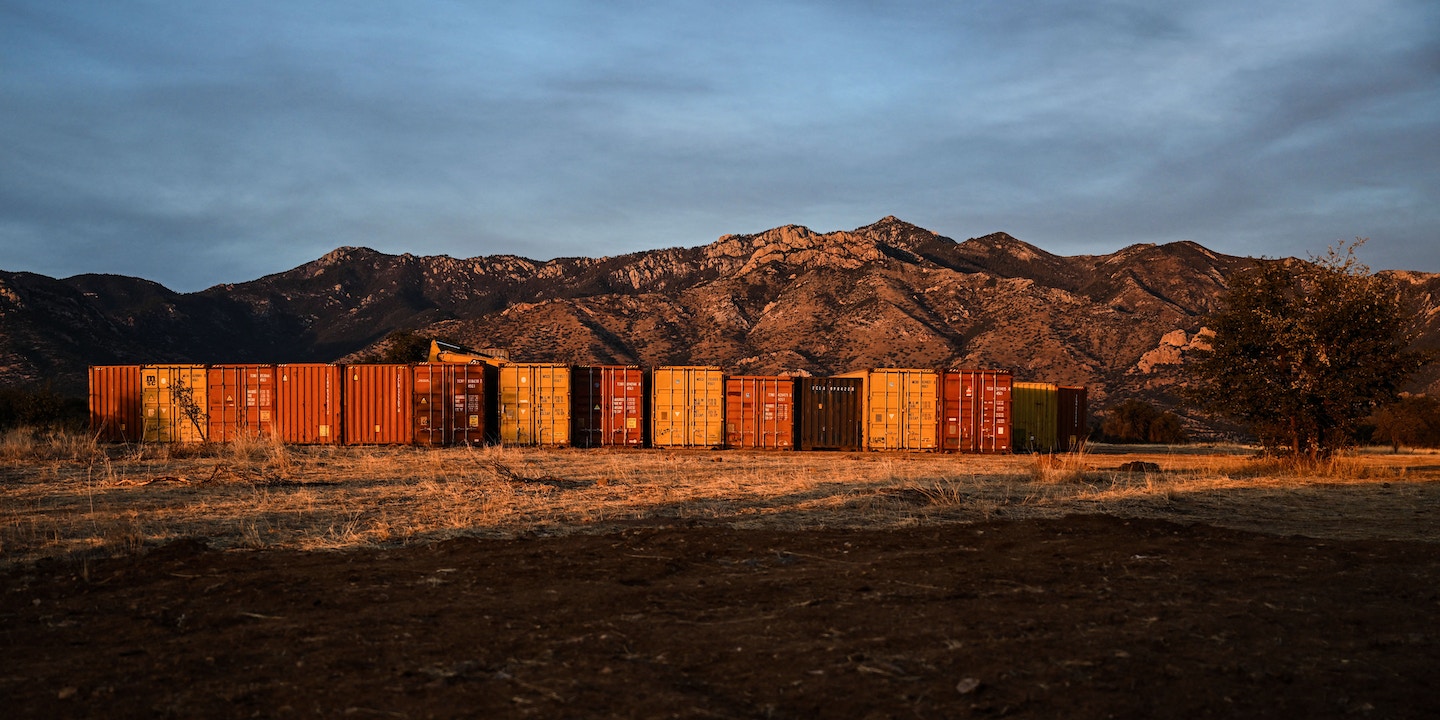 Arizona Gov. Doug Ducey agreed to remove hundreds of shipping containers that he illegally installed on federal land along the southern border, marking an unprecedented victory for borderland residents who successfully fought to stop the project.

State and federal officials, in a joint filing this week, informed a judge in Arizona’s U.S. district court that a process to dismantle the governor’s unlawful barrier would soon begin. Following weeks of fierce local resistance on the ground, the agreement will ironically make Ducey — a Republican who declared his state under invasion — the first U.S. lawmaker to initiate a large-scale border wall removal in modern American history.

Andy Kayner and Jennifer Wrenn, who live just north of the container wall, tempered their reactions to the news. The couple has been at the center of the battle to halt the governor’s project, fueled by outrage over the harm that was done to a landscape they treasure and the endless convoys of trailer-pulling trucks rumbling past their home day and night.

“Obviously, we’d love to see the wall totally gone,” Kayner told The Intercept. “Open that space back up for a wildlife corridor.”

On the one hand, Wrenn said, the agreement was clearly a win for the local residents who protested, as well as their wider network of supporters. On the other, she worried that Ducey, who leaves office at the end of the year, will slow-roll his deinstallation effort, leaving his Democratic successor, Gov.-elect Katie Hobbs, to clean up the mess. “How much can he remove before January 5?” Wrenn asked, referring to Hobbs’s inauguration date.

“Taxpayers shouldn’t have to pay for putting it in, then taking it out, and then restoring the land and restoring all the roads.”

Precisely how much Ducey’s entire endeavor has — and will — cost Arizonans remains to be seen. In October, the governor’s office told The Intercept the installation of the wall in Coronado National Forest, south of Tucson, would cost $95 million. Combined with a separate, smaller, equally unlawful project in Yuma, total contracted costs for container wall installation in Arizona over the past year has been $123.6 million. Removal and remediation costs associated with taking the containers down could drive the overall total up even further.

Ducey should be the one footing the bill, Wrenn argued. “Taxpayers shouldn’t have to pay for putting it in, then taking it out,” she said, “and then restoring the land and restoring all the roads.”

Ducey first began stacking multi-ton shipping containers along the border in Coronado National Forest, in Cochise County, in late October despite being informed multiple times by federal officials in the U.S. Forest Service that his project was unauthorized and thus illegal.

In a lawsuit targeting the Biden administration’s top land management agencies, Ducey argued that a century’s worth of legal agreement that the border in Southern Arizona is federal property was wrong. The state had jurisdiction over the land, he contended, and because he declared a state of emergency resulting from a purported “invasion,” he was within his rights to disregard federal laws and authorization requirements surrounding construction in the national forest. (The litigation is ongoing).

In a span of a month and a half, Ducey placed nearly 4 miles of shipping containers across federally protected jaguar habitat entirely unimpeded. By all indications, he was on track to complete a 10-mile wall through the stunning San Rafael Valley when his march was halted by a network of local residents frustrated with the absence of a federal response. Kayner and Wrenn were among them, parking their pop-up camper near the contractors’ vehicles and spending several nights at the site with other local activists and allies.

Beginning on December 5, the demonstrators’ continued presence ended construction at the site. The week after the shutdown began, the Department of Justice filed a lawsuit against Ducey and Arizona’s Department of Emergency and Military Affairs over the container wall. In order to avoid the injunction that the suit called for, Ducey and the state entered into the agreement that was laid out in federal court this week.

The brief, two-page stipulation says that by January 3, Arizona “to the extent feasible” will remove all containers and equipment related to the much smaller installation in Yuma. The agreement calls for the same removal process for the much larger Coronado National Forest installation, though it does not include a target end date for those efforts.

In comments to the New York Times on Wednesday, Ducey’s press secretary, C.J. Karamargin, implied that the governor’s project had achieved its objective in pressuring the Biden administration to fill gaps in the border wall more quickly. “We’ll happily remove them if the federal government gets serious and does what they’re supposed to do, which is secure the border,” Karamargin said of the governor’s containers. “We now have indications that they’re moving closer, that they’re more serious.”

In a briefing in late July, Customs and Border Protection officials said that the Biden administration was beginning a “remediation” process along the border that would include filling “small” gaps in the border wall in select areas, in addition to various road and environmental repair projects. Contrary to Karamargin’s suggestion this week, a Customs and Border Protection public affairs officer John Mennell told The Intercept that the agency has made no changes to its plans because of Ducey’s Coronado project. Those plans, available online, do not describe erecting a border wall where the governor placed the containers.

For Kayner and Wrenn, the story of Ducey’s containers — how they came to cross Coronado National Forest and what stopped them from going any further — are linked to issues that go beyond the border and immigration. It’s the way in which the governor’s illegal wall, cleaving a vital desert ecosystem in half as it did, created yet another threat to biodiversity in an era of mass extinction. “We’d love to see dialogue about what we’re going to do with that area long term,” Kayner said. “Let’s just talk about being a little kinder to the wildlife, who’ve got no seat at the table.”

“This was the politicians violating the rule of law, and ordinary citizens — being peaceful, lawful, and legal — taking it into their own hands.”

Wrenn, meanwhile, linked the container wall to events in Washington. “This was a perfect counterpoint to the insurrection and the January 6 Committee,” she said. “This was the politicians violating the rule of law, and ordinary citizens — being peaceful, lawful, and legal — taking it into their own hands and helping preserve democracy in our country.”

Ducey’s sudden reversal on the project raises a series of questions. What if the Department of Justice had sought an injunction sooner? How much money could have been saved? And how much damage to the environment — and the credibility of the U.S. Forest Service and the laws it’s meant to enforce — could have been prevented?

One thing that is clear, Wrenn said, is that Ducey’s wall became the catalyst for something unforgettable. “When we realized that this wasn’t just a protest, that we could actually sit down in the road and stop it, it was the biggest eureka moment,” she said. “After hundreds and hundreds of protests I’ve been to in my life, I’ve never felt that — that this was real, that this had direct positive impact.”