The Moazzam Begg Arrest: Part of the Effort to Criminalize Muslim Political Dissent 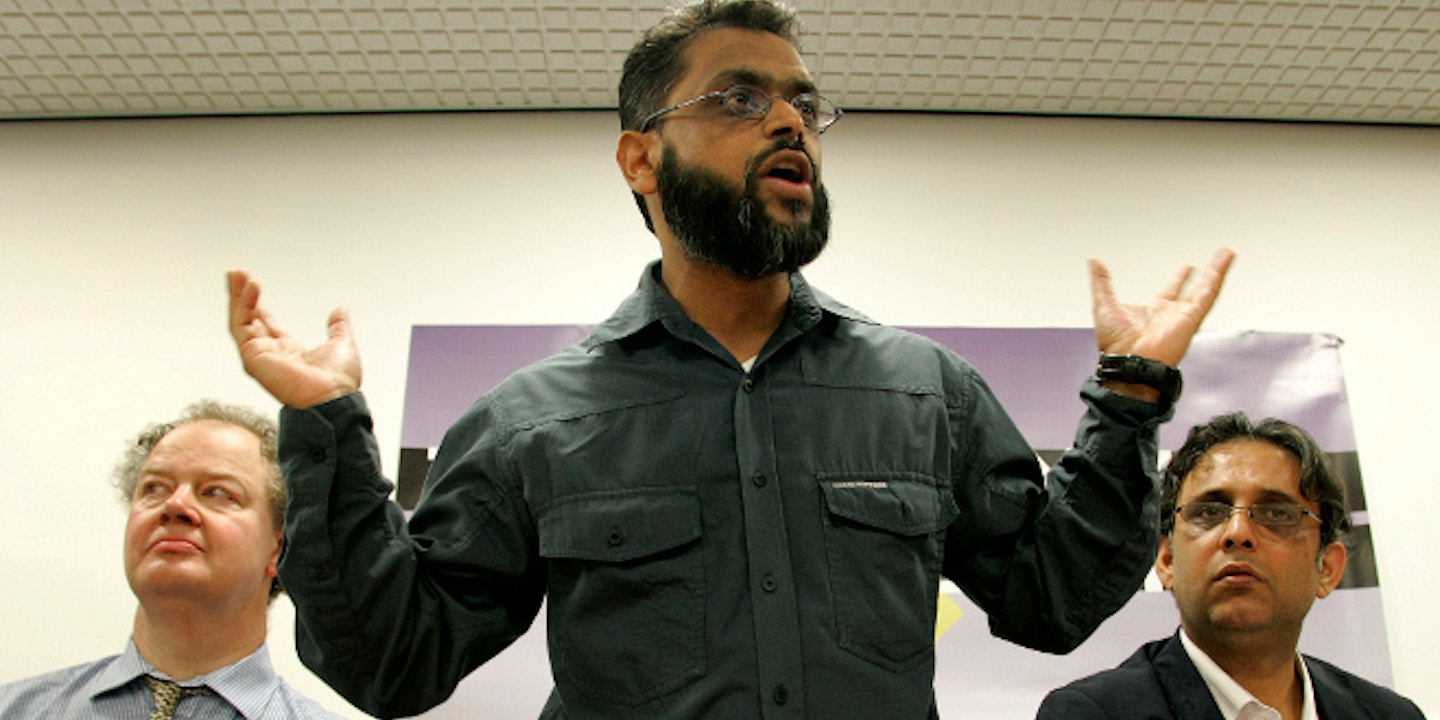 Arrested in Pakistan in 2002, he was transferred to Bagram Air Force Base in Afghanistan, where he suffered torture and witnessed U.S. interrogators beat an innocent taxi driver to death, and then onwards to Guantanamo Bay where he would be detained for the next three years in conditions he’d describe as “torturous”.

Throughout this time Begg, now 45, was repeatedly deprived of legal counsel and was prohibited from even viewing the alleged evidence against him. After public outcry in his home country resulted in his repatriation to England in 2005, Begg went on to become a human rights activist — writing books, and advocating for other post-9/11 detainees through his organization Cageprisoners, whose self-described mission is: “working to empower communities impacted by the War on Terror”; “campaigning against the War on Terror”; and “working with survivors of abuse and mistreatment across the globe.”

Much of this work has included investigating the claims of others who were tortured with the complicity of the British government. It is in retaliation for this activism, he says, that he has been repeatedly harassed, including repeated interrogations and the confiscation of his passport last December at Heathrow Airport, when agents told him it was “not in the public interest” for him to retain it. In an article he published about that incident, Begg two weeks ago wrote: “I am certain that the only reason I am being continually harassed….[is because of] investigations and assertions based on hard evidence that British governments, past and present, have been wilfully complicit in torture.”

On Tuesday, Begg was arrested in an “anti-terror raid” on his home outside Birmingham, charged with “terrorism” offenses for having allegedly traveled to Syria to assist Syrian rebels. He was among four other people arrested that day, all due to Syria-related offences.

Curiously, however, Begg’s last visit to Syria was in the relatively distant past. He visited the country last in December 2012 — for what he said were advocacy purposes and to continue his investigation on torture victims renditioned to the country by Western intelligence agencies. Several individuals of Syrian descent were notoriously renditioned to the Assad regime by the U.S. for interrogation and torture, including the Canadian citizen Maher Arar, whose treatment resulted in a formal apology from the Canadian government and compensation of close to $10 million.

Crucially, it appears that Begg was given explicit permission to take this trip to Syria by Britain’s MI5. In his last article, he described:

[I]n October 2012, I was called by an MI5 officer who said they wanted to talk to me about my views on the situation in Syria…I agreed to speak to them and meet at a hotel in East London. Both MI5 and I had our lawyers present. At the end of the meeting I was assured by MI5 that my proposed return to Syria to continue my work would not be hindered, and it wasn’t.

This raises the obvious question: if the British government had concerns about his involvement with militant groups in Syria, why did it specifically meet with him to green-light his trip there? Furthermore, if his arrest was related to his December 2012 trip, why would the government wait more than a year to arrest him for it?

That’s all independent of the bizarre spectacle of charging someone with “terrorism” offenses for allegedly helping rebels which the U.S. government itself is aiding and for whom intervention was advocated by the U.S. president as recently as last year. Indeed, in 2012, the year Begg made his trip, the widespread view in the West of Syrian rebels was that they were noble freedom-fighters who deserved as much help as possible, not “terrorists” whom the law made it a crime to assist. In the same year another major visiting supporter to the opposition movement was John McCain — an indication of how much mainstream Western support the uprising enjoyed at the time.

While the timing of his arrest makes little evident sense from a national security perspective, it does appear to correspond remarkably to his advocacy work. Cageprisoners’s media officer, Cerie Bullivant, yesterday noted: “Moazzam has been very open about his international travel and his objectives, including importantly exposing British complicity in rendition and torture. …[T]he timing [of his arrest] coincides with the planned release of a CAGE report on Syria and a major news piece that was due to be televised soon.”

In his last, seemingly prescient Facebook post, published just hours before his arrest, Begg wrote: “Sometimes knowing too much can be a curse.” UK-based human rights investigator Nawaz Hanif told The Intercept that the charges against Begg are a transparent attempt at silencing political dissent:

The arrest of Moazzam Begg under British anti-terror laws is eerily similar to the detention of David Miranda a few months ago – both utilizing vague terror allegations to stifle investigations into abuses of power….It is pertinent to ask British authorities why Moazzam is being arrested a day before his report on torture and rendition is to be released, and over a year since he last stepped foot in Syria.”

This explanation is all the more credible given the exploitation of terrorism charges by both the U.S. and UK governments throughout the post-9/11 era. There has been a consistent attempt by government authorities to stifle political activism among those criticizing civil rights abuses as well as foreign military expansionism. Predominantly, the brunt of this suppression has focused on Muslim minority communities in the West.

The No Separate Justice campaign, along with the National Coalition to Protect Civil Freedoms, have documented numerous cases of Muslim political activists who have been arrested and detained for their public criticisms of the conduct of the War on Terror — usually under the guise of highly-tendentious terrorism charges. Individuals such as Tarek Mehanna, Fahad Hashmi, Jubair Ahmad, Emerson Winfield Begolly, and others have come to the attention of authorities for their highly public expressions of dissent, charged with terrorism, and then handed long prison sentences under extreme circumstances of incarceration rivaling those at Guantanamo.

The largest civil rights organization in the U.S., CAIR, was smeared by the DOJ in 2003 as “an unindicted co-conspirator” in a terrorism case (but given no opportunity to contest the innuendo), while the nation’s largest Muslim charity was prosecuted on terrorism charges for the crime of sending money to Palestinians deemed terrorists by the U.S. Government. Federal courts in the U.S., and to a lesser extent in the UK, have been subservient in the extreme to national security claims by the government, all but ensuring that accused Muslims are convicted even when the evidence is at its flimsiest. All of this, coupled with widespread community surveillance, has sent a message that aggressive political dissent among Muslims will not be tolerated and can easily be criminalized as “terrorism”.

For his part — and despite his horrific experiences — Begg has always maintained that whatever animosity he has felt has not been towards America but to the government which abused him, saying in a 2006 interview: “I’m absolutely clear in my mind that there are a great number of American soldiers who are good, decent people. … Do I hate Americans? No. Do I hate the administration? I think unreservedly.”

While government suppression of activists usually begins by targeting unpopular minority groups such as Muslims, it is clear that the dragnet is already beginning to expand, as exemplified by the recent threats and detentions of journalists, whistleblowers and other activist groups under terrorism laws.

The arrest of one of the West’s most prominent Muslim war on terror critics is almost certain to further stifle political activism within the Muslim community and more broadly as well.  Utilizing extremely dubious terrorism charges against domestic dissidents has been a hallmark of the national security state in the post-9/11 era. That such tactics are commonly condemned when implemented by authoritarian governments such as China, Egypt and Russia – and yet enthusiastically implemented at home with little objection – exemplifies the corrosive measures and accompanying mentality which are undermining the foundations of Western freedoms.