The outrageous whitewash issued Wednesday by the CIA panel John Brennan hand-picked to lead the investigation into his agency’s spying on Senate staffers is being taken seriously by the elite Washington media. But it’s just the latest element in a long string of cover-ups and deceptions. 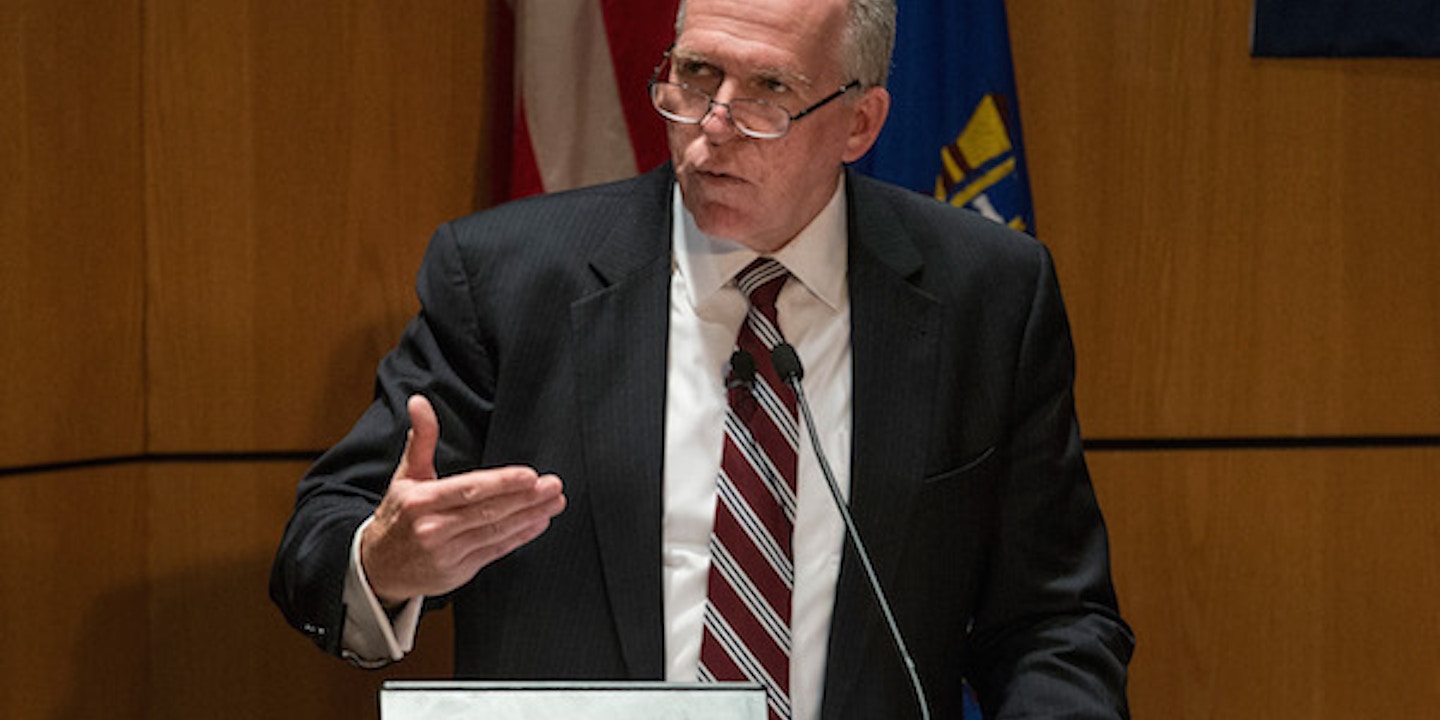 The outrageous whitewash issued Wednesday by the CIA panel John Brennan hand-picked to lead the investigation into his agency’s spying on Senate staffers is being taken seriously by the elite Washington media, which is solemnly reporting that officials have been “cleared” of any “wrongdoing“.

But what the report really does is provide yet more evidence of Brennan’s extraordinary impunity.

The panel concluded that CIA officials acted reasonably by scouring Senate computer drives in early 2014 when faced with a “potential security breach”. (That “breach” had allowed Senate staffers investigating CIA torture to access, more than three years earlier, a handful of documents Brennan didn’t want them to see.)

But the CIA also released a redacted version of the full report of an earlier investigation by the CIA’s somewhat more independent inspector general’s office. And between the two reports, it is now more clear than ever that Brennan was the prime mover behind a hugely inappropriate assault on the constitutional separation of powers, and continues to get away with it.

Most notably, the official who ran the CIA facility where the Senate staffers had been allowed to set up shop wrote in a memo to the inspector general that Brennan, after speaking with White House Chief of Staff Denis McDonough about the errant documents, called him and “emphasized that I was to use whatever means necessary to answer the question of how the documents arrived on the SSCI side of the system.”

SSCI – pronounced “sissy”— is how the CIA refers to the Senate Select Committee on Intelligence. And “whatever means necessary” quickly turned into a foray into the Senate’s private workspace.

And it was Brennan who made the paramount error in judgement here, when he decided that finding out how a series of embarrassing, revelatory CIA documents found their way into the hands of congressional overseers – really not such a bad thing – was somehow more of a threat to national security than respecting the independence of a separate branch of government, recognizing whose job it is to provide oversight over who, or honoring the spirit of an agreement between the agency and the Senate.

The whitewash was very much by design. Brennan stocked the panel with three CIA staffers and two of the most easily manipulated, consummate Washington insiders you could possibly imagine: former senator Evan Bayh, whose reputation as an unprincipled opportunist is legend; and Bob Bauer, whose lifelong mission has been to raise money for Democrats, not take stands. Then, with in-your-face chutzpah, Brennan called it an “accountability board”.

Far from “clearing” anyone of anything, the panel’s report is just the latest element in a long string of cover-ups and deceptions orchestrated by Brennan.

At issue, of course, is the same intrusion into Senate computers that Brennan initially tried to make people think was a figment of then-Senate Intelligence Committee Chair Dianne Feinstein’s warped imagination. “Nothing could be further from the truth,” Brennan said when confronted with Feinstein’s allegations. “That’s just beyond the — you know, the scope of reason in terms of what we would do.”

But he obviously knew that what he called “spurious allegations… wholly unsupported by facts” were largely true. And while could have argued his real position, he chose instead to deceive.

And behind it all, of course, lies the horrible truth neither Brennan nor the CIA want to admit: That they tortured detainees, many of them innocent, and lied to make people think it was worth it.

Indeed, when Brennan made his first public appearance after the Senate torture report came out, he was unbowed – in fact, actually appeared emboldened. (He also validated the worst fears of torture opponents by saying that the return of torture tactics was a matter for “future policymakers”.)

Senator Ron Wyden, the Democrat from Oregon who has led what little push there is in Congress for accountability in the intelligence community, issued a statement in response to the newly released documents yesterday, saying that “Brennan either needs to reprimand the individuals involved or take responsibility himself. So far he has done neither.”

This episode further illustrates the cumulative corrosive effects of the CIA’s torture program. First, agency officers and contractors went far beyond the limits set out even in the Justice Department’s torture memos. Then, top officials spent a decade making inaccurate statements about torture’s effectiveness to Congress, the White House and the American people. Next, instead of acknowledging these years of misrepresentations, the CIA’s current leadership decided to double down on denial. And when CIA officials were worried that the Intelligence Committee had found a document that contradicted their claims, they secretly searched Senate computer files to find out if Senate investigators had obtained it.

The Brennan panel’s report is well worth a read as a prime example of Washington hair-splitting, obfuscation and sucking up.

For instance, the report argues that Senate staffers had to be aware that the system painstakingly set up for their exclusive use was nevertheless “non-inviolable” (great addition to the Washington lexicon, by the way). Why? Because CIA contractors sometimes helped them with tech support; because they had to click on the CIA’s standard disclaimer warning that the system was for authorized use only and was subject to monitoring; and because the CIA had previously (and scandalously) gotten away with unilaterally removing hundreds of documents from the Senate computer drives, after deciding they were released in error.

Brennan’s “accountability” panel respectfully accepted the position, as stated by one official, that the CIA had a “legal duty to search the SSCI side of the RDINet for the presence of Agency documents to which SSCI staff should not have access.” (The RDINet is what they called the special network the CIA insisted be set up for the Senate staffers; RDI stands for rendition, detention and interrogation.)

Indeed, the panel even swallowed the astonishing argument that the sensitivity of the matter made further action essential — rather than, say, deference to constitutionally significant boundaries:

The fact that the potential security breach involved a co-equal branch of the United States Government added substantially to the complexity and sensitivity of the situation. Great certitude was understandably desired before raising it with the Senate and pursuing formal allegations of wrongdoing.

And the panel concluded that any mistakes made were innocent. For instance, it described how a “misunderstanding” between Brennan and an official whose name was redacted “arose because the former did not appreciate what forensic techniques were necessary to answer his question and the latter did not understand the D/CIA’s expectations that no intrusive methods be employed.” (The D/CIA is the director of the CIA.) (And why is the CIA redacting the names of senior CIA officials, anyway? Most of them, like acting general counsel Robert Eatinger, are hardly undercover.)

CIA officials ended up reading five Senate emails CIA, but “none were of any consequence or involving discussions of substantive matters,” the panel concluded.

The panel’s report can also be seen as Brennan’s total assault on David B. Buckley, the CIA inspector general who wrote the first, highly critical report on the incident – and who suddenly resigned a few days ago and is “out this week” according to his office. The report didn’t just bat down the inspector general’s conclusions as “unsupported”; it belittled them. In a recommendation that simply dripped with contempt, the panel concluded that “it would be better” if the inspector general’s office “kept more complete records of interviews.”

Meanwhile, the full (though redacted) inspector general’s report fleshes out a lot of the details of the previously-released executive summary, which generally concluded that the CIA had improperly accessed the Senate computers.

Now we learn that the documents at the heart of the matter — that have been widely referred to as the Panetta Review — were actually a collection of weekly reports written by the CIA officials who were working with the Senate staffers, keeping then-CIA director Leon Panetta apprised of the information they were turning over. The summaries, reflecting the same information upon which the blistering Senate report was ultimately based, evidently didn’t cast the CIA behavior in a good light.

Feinstein has said the documents were first discovered by committee staff using CIA-provided search tools in 2010. But they evidently didn’t become important to the CIA until years later, when the agency was pushing back against the Senate report’s harrowing conclusions, and realized how the documents were, as Feinstein put it, a “unique and interesting… acknowledgement of significant CIA wrongdoing.”

(The reports conclude that the Google search software the CIA installed at the facility initially gave staffers results from network drives they weren’t supposed to be able to see; and that with the file paths listed, the staffers were then able to poke around the directories. Fine operational security.)

One thing both reports expose is the odd inability of Brennan or other top officials to consistently recall exactly what they had done.

“There is some confusion as to who in Senior Leadership authorized what action and when they issued these directives,” Brennan’s panel acknowledged.

Due to conflicting information obtained by OIG through the course of the investigation, OIG could not determine whether any of D/CIA Brennan’s senior staff, much less the D/CIA himself, approved any of the taskings.

It’s a particularly odd inability to recall given how Brennan and others were obviously aware of the potential widespread interest in what they were about to do.

At one planning meeting, Brennan clearly demonstrated a concern about how it would look. According to a subordinate’s memo, when Brennan found members of his Counterintelligence Center had become part of the team looking into the issue, he “expressed irritation that CIC was involved in the effort, stating that the ‘optic’ of CIC performing the [REDACTED] work was poor. Several attendees attempted to explain that [REDACTED] but the Director continued to focus on the ‘optics’.”