A “dirty tricks” unit helped with covert cyberoperations to prevent Argentina from taking the islands. Faced with mounting international pressure over the Falkland Islands territorial dispute, the British government enlisted its spy service, including a highly secretive unit known for using “dirty tricks,” to covertly launch offensive cyberoperations to prevent Argentina from taking the islands.

At the heart of this operation was the Joint Threat Research and Intelligence Group, known by the acronym JTRIG, a secretive unit that has been involved in spreading misinformation.

The British government, which has continuously administered the Falkland Islands — also known as the Malvinas — since 1833, has rejected Argentine and international calls to open negotiations on territorial sovereignty. Worried that Argentina, emboldened by international opinion, may attempt to retake the islands diplomatically or militarily, JTRIG and other GCHQ divisions were tasked “to support FCO’s [Foreign and Commonwealth Office’s] goals relating to Argentina and the Falkland Islands.” A subsequent document suggests the main FCO goal was to “[prevent] Argentina from taking over the Falkland Islands” and that new offensive cyberoperations were underway in 2011 to further that end.

Tensions between the two nations, which fought a war over the small archipelago in the South Atlantic Ocean in 1982, reached a boil in 2010 with the British discovery of large, offshore oil and gas reserves potentially worth billions of dollars.

The British government frames the issue as one of residents’ self-determination. Prime Minister David Cameron maintains that the islands will remain British as long as that was the will of their inhabitants, “full stop, end of story.”

Argentine President Cristina Kirchner, known for her provocative, left-leaning foreign policy since taking office in 2007, rallied regional and international leaders to pass resolutions in international bodies supportive of Argentina’s claim to the islands and stand against what she called the U.K.’s “downright colonialism.”

Even the United States, Britain’s closest ally, declined to support the U.K. position, instead offering to mediate a resolution between the two sides in 2010. Prime Minister Cameron rejected the proposal, calling it “disappointing.”

GCHQ’s efforts on Argentina and the Falklands between 2008 and 2011, the time period the documents cover, were broad and not limited solely to JTRIG. Surveillance of Argentine “military and Leadership” communications on various platforms was a “high priority” task. Despite the Obama administration’s unwillingness to publicly back their ally, NSA assistance was ongoing as of 2010. According to an NSA “Extended Enterprise Report” dated June 2008, based on NSA officials’ meetings with GCHQ representatives, Argentina was “GCHQ’s primary interest in the region.” 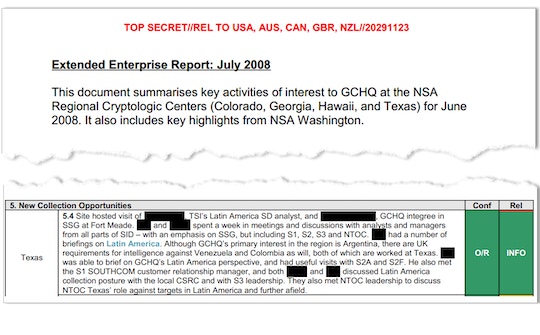 While the full extent of JTRIG’s tactics used in the Falklands mission is unclear, the scope of JTRIG’s approved capabilities offers an idea of what may have been done. The group, first revealed last year by NBC News and The Intercept, has developed various techniques — including “false flag” operations, sexual “honey traps,” and implanting computer viruses — to collect intelligence, plant propaganda and diminish or discredit opponents. As reported in The Intercept last year, JTRIG “has developed covert tools to seed the internet with false information, including the ability to manipulate the results of online polls, artificially inflate pageview counts on web sites, ‘amplif[y]’ sanctioned messages on YouTube,” and plant false Facebook wall posts for “entire countries.” According to a study of the group by the U.K.’s Defence Science and Technology Laboratory (DSTL), “the language of JTRIG’s operations is characterized by terms such as ‘discredit,’ promote ‘distrust,’ ‘dissuade,’ ‘deceive,’ ‘disrupt,’ ‘delay,’ ‘deny,’ ‘denigrate/degrade,’ and ‘deter.’”

The unit’s activities generally break down into two symbiotic categories: online Human Intelligence, or HUMINT, and “effects operations.” Online HUMINT is the collection of information on human targets through passive tracking or overt interaction with a target through an alias. These operations may sometimes be in support of, or in conjunction with, covert MI-6 agents on the ground.

Effects operations are used to disseminate deception and disruption online. A full catalog of JTRIG’s capabilities as of 2012 can be seen here.

Operation QUITO, the group’s operation to support the Foreign Office’s “goals relating to Argentina and the Falkland Islands” is called a “pioneering effects operation.” That operation, still in the planning stages, had undergone “a significant amount of prep work” and was “almost complete” as of 2009. 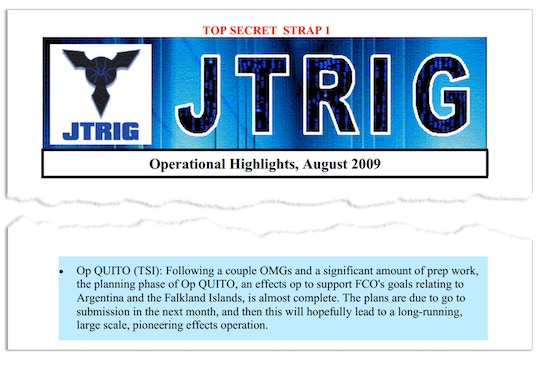 The DSTL study of JTRIG, published in March 2011, states that one of the unit’s aims was “preventing Argentina from taking over the Falkland Islands by conducting online HUMINT.” The study, which provides anecdotal references to missions, is by no means a comprehensive list of the group’s activities. It makes no mention of the scope of online HUMINT or of any related effects operations.

A GCHQ Network Analysis Centre document from later that year boasts that “Network Analysis in support of Offensive Cyber operations” in Argentina has progressed from “RED” to “GREEN” — or inactive to active — during that quarter, providing clear evidence of ongoing operational development in Argentina as of late 2011.

GCHQ’s mission regarding the Falkland Islands also appears to extend beyond just Argentina and involve regional leaders and attitudes. A November 2011 workshop on “Mission Driven Access” gathered staff to “build on pioneering work already done” and tried to develop new ideas for real world scenarios. One such scenario: “GCHQ has consistently underperformed on Brazil, with growing concerns that [South] American attitudes on the Falklands are swinging behind Argentina. A forthcoming Ministerial visit to Chile provides an opportunity to counter the trend. The Foreign Office are looking for advice.” In February 2012, Mercopress reported that Chile had received official notification of a possible visit by British Foreign Secretary William Hague. The visit eventually took place in November of 2012.

In 2013, with an eye to international opinion, the British government carried out a self-determination referendum in the Falklands in which all but four Falklands inhabitants voted to retain “their status as an Overseas Territory of the United Kingdom.”

The dispute between the U.K. and Argentina remains unresolved and relations have worsened recently. Last week, British Defense Secretary Michael Fallon announced a £280m ($414m) plan to bolster the islands’ military presence after allegations emerged that Argentina was in negotiations with Russia to lease 12 Soviet-era long-range bombers. Speaking to the BBC, Fallon said the move was to protect Falkland residents’ “right to remain British.” Senior Argentine and Russian officials have both denied that any discussions have taken place. Argentina’s Defense Minister called the idea of an Argentine military assault on the Falklands “crazy.”

Argentine officials from the offices of the president, the minister of foreign relations, and the secretary of state for Malvinas affairs refused to comment unless they were first provided with copies of the documents.

Asked to describe their role in British policy in the South Atlantic, GCHQ told The Intercept, “It is long standing policy that we do not comment on intelligence matters.” The NSA did not respond to a request for comment.