Retiring NYPD Commissioner William Bratton Claims Police Will Reform From Within. Why Haven’t They?

On his last day, NYPD Commissioner William Bratton ended his 46 years as a police officer with a demonstrably false assertion. 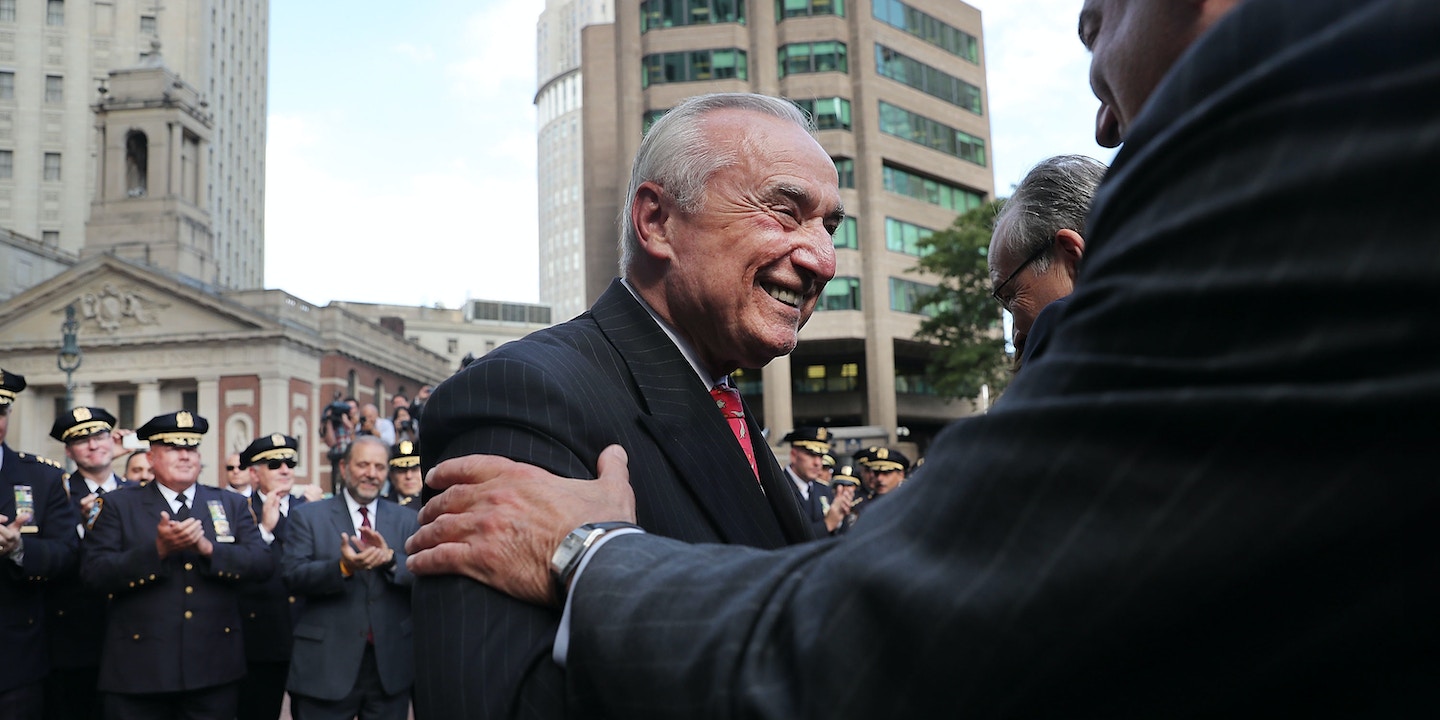 On his last day at the helm of the largest police force in the country, Commissioner William Bratton ended his 46 years as a police officer with a parting thought: Police reform will happen from within.

His words, coming at a time when the public’s confidence in the police officers sworn to protect them is at a historic low and advocates in New York and across the country are demanding faster, more radical transformations to police departments, couldn’t have sounded more tone-deaf and reactionary.

In a New York Times op-ed he opened by billing himself a “reformer,” Bratton shut down the growing chorus of critics demanding more police regulation and oversight:

There are police reformers from outside the profession who think that changing police culture is a matter of passing regulations, establishing oversight bodies and more or less legislating a new order. It is not. Such oversight usually has only marginal impact. What changes police culture is leadership from within.

In other words, only cops can change cops. Except so far they haven’t.

“If police departments could reform themselves from within, we wouldn’t be in a national crisis of police abuse and lack of accountability of which New York is ground zero,” Monifa Bandele, a member of the New York-based Communities United for Police Reform, wrote in a statement to The Intercept. “He is no reformer but is part of the problem because of his inability to acknowledge the harm done by his policies and under his leadership, or have any perspective on experiences outside of his own.”

In New York City, the “leave police alone” approach has long been the operating principle, as police leaders have successfully fought off legislation aiming to regulate the department’s practices, or even just make them more transparent and accountable to the public.

As Bratton leaves office, New York is home to one of the most restrictive police secrecy laws in the country, making it nearly impossible to access officers’ disciplinary records — or identify where and how often the department has failed to do anything about misconduct.

A court-ordered body-camera program has been delayed since 2013.

And earlier this summer, the New York City Council declined to consider a legislative proposal that could have made it mandatory for police officers to do something as basic as identify themselves and explain the reasons for a stop. The proposal, known as the Right to Know Act, was endorsed by some 200 community organizations — the police reformers Bratton thinks should let cops be cops.

In a backroom deal, Council Speaker Melissa Mark-Viverito reached a compromise with the NYPD to adopt some reforms as a matter of department policy rather than law. That’s also what happened with a proposal to decriminalize some petty offenses — object of the “broken windows policing” that’s been the signature of Bratton’s second mandate in New York. That, too, was reduced to a matter of police discretion rather than regulation, essentially leaving it up to cops to decide whether or not to “reform.”

As The Intercept has reported, reform that is not legislated is essentially as good as no reform. The police chokehold that killed Eric Garner two summers ago was against the department’s policy — not against the law. And that wasn’t enough to keep Officer Daniel Pantaleo from “walking around free as a bird today,” said Lumumba Bandele, another member of Communities United for Police Reform. (In fact, Pantaleo got a raise.)

In his op-ed, Bratton boasted of the reforms passed under his watch: new training, smarter technology, and a move toward community policing that critics have slammed as a feel-good term that’s just “smoke and mirrors” if it doesn’t come with exactly what Bratton doesn’t want: civilian oversight and real accountability.

Where more substantial reform did happen in recent years — most notably in a plunge in the NYPD’s hugely controversial “stop and frisk” practice — it did so on the orders of a federal judge and with the appointment of an independent monitor.

Certainly not from within.