The video, used by the Joint Special Operations University, states that megacities will be breeding grounds for “adversaries and hybrid threats,” and that the U.S. Army is unprepared. 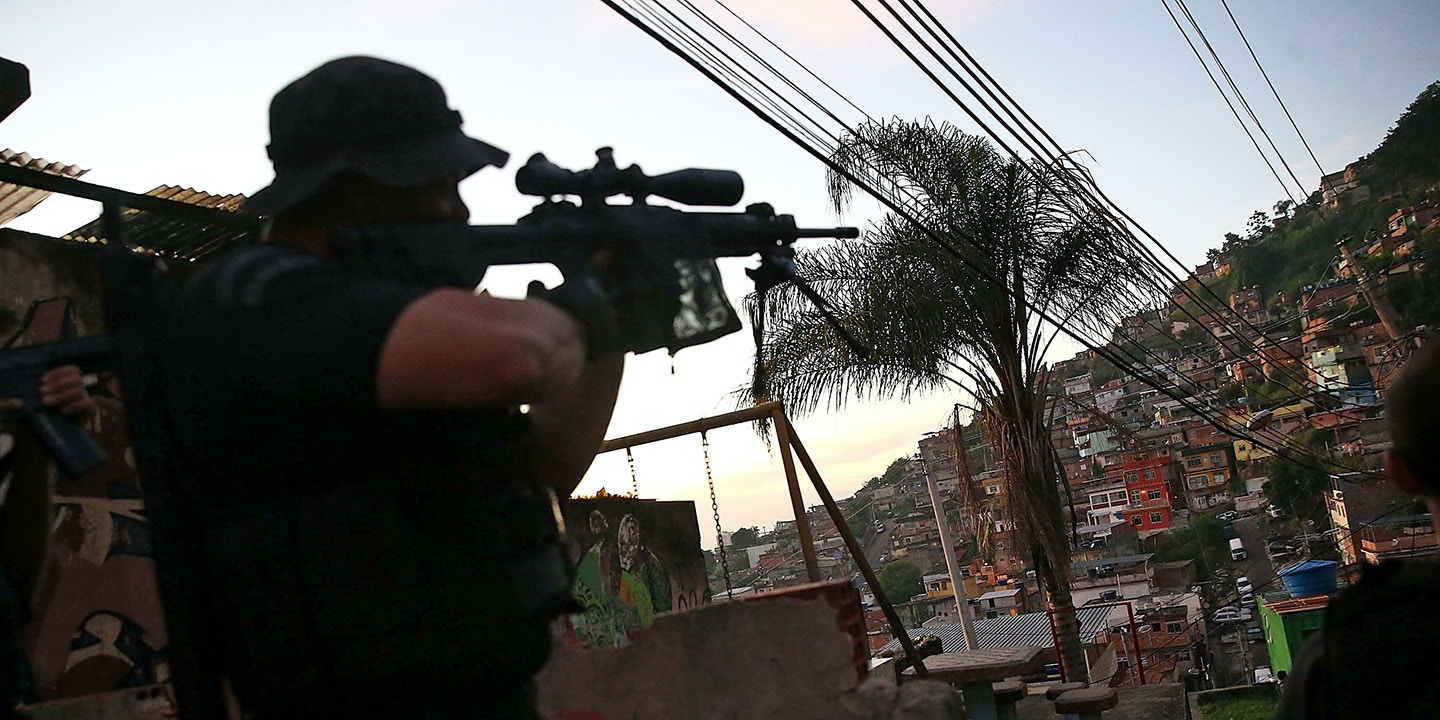 The year is 2030. Forget about the flying cars, robot maids, and moving sidewalks we were promised. They’re not happening. But that doesn’t mean the future is a total unknown.

According to a startling Pentagon video obtained by The Intercept, the future of global cities will be an amalgam of the settings of “Escape from New York” and “Robocop” — with dashes of the “Warriors” and “Divergent” thrown in. It will be a world of Robert Kaplan-esque urban hellscapes — brutal and anarchic supercities filled with gangs of youth-gone-wild, a restive underclass, criminal syndicates, and bands of malicious hackers.

At least that’s the scenario outlined in “Megacities: Urban Future, the Emerging Complexity,” a five-minute video that has been used at the Pentagon’s Joint Special Operations University. All that stands between the coming chaos and the good people of Lagos and Dhaka (or maybe even New York City) is the U.S. Army, according to the video, which The Intercept obtained via the Freedom of Information Act.

“Megacities: Urban Future, the Emerging Complexity,” a video created by the Army and used at the Pentagon’s Joint Special Operations University.

The video is nothing if not an instant dystopian classic: melancholy music, an ominous voiceover, and cascading images of sprawling slums and urban conflict. “Megacities are complex systems where people and structures are compressed together in ways that defy both our understanding of city planning and military doctrine,” says a disembodied voice. “These are the future breeding grounds, incubators, and launching pads for adversaries and hybrid threats.”

The video was used as part of an “Advanced Special Operations Combating Terrorism” course offered at JSOU earlier this year, for a lesson on “The Emerging Terrorism Threat.” JSOU is operated by U.S. Special Operations Command, the umbrella organization for America’s most elite troops. JSOU describes itself as geared toward preparing special operations forces “to shape the future strategic environment by providing specialized joint professional military education, developing SOF specific undergraduate and graduate level academic programs and by fostering special operations research.”

Megacities are, by definition, urban areas with a population of 10 million or more, and they have been a recent source of worry and research for the U.S. military. A 2014 Army report, titled “Megacities and the United States Army,” warned that “the Army is currently unprepared. Although the Army has a long history of urban fighting, it has never dealt with an environment so complex and beyond the scope of its resources.” A separate Army study published this year bemoans the fact that the “U.S. Army is incapable of operating within the megacity.”

These fears are reflected in the hyperbolic “Megacities” video.

As the film unfolds, we’re bombarded with an apocalyptic list of ills endemic to this new urban environment: “criminal networks,” “substandard infrastructure,” “religious and ethnic tensions,” “impoverishment, slums,” “open landfills, over-burdened sewers,” and a “growing mass of unemployed.” The list, as long as it is grim, accompanies photos of garbage-choked streets, masked rock throwers, and riot cops battling protesters in the developing world. “Growth will magnify the increasing separation between rich and poor,” the narrator warns as the scene shifts to New York City. Looking down from a high vantage point on Third Avenue, we’re left to ponder if the Army will one day find itself defending the lunchtime crowd dining on $57 “NY Cut Sirloin” steaks at (the plainly visible) Smith and Wollensky.

Lacking opening and closing credits, the provenance of “Megacities” was initially unclear, with SOCOM claiming the video was produced by JSOU, before indicating it was actually created by the Army. “It was made for an internal military audience to illuminate the challenges of operating in megacity environments,” Army spokesperson William Layer told The Intercept in an email. “The video was privately produced pro-bono in spring of 2014 based on ‘Megacities and the United States Army.’… The producer of the film wishes to remain anonymous.”

According to the video, tomorrow’s vast urban jungles will be replete with “subterranean labyrinths” governed by their “own social code and rule of law.” They’ll also enable a proliferation of “digital domains” that facilitate “sophisticated illicit economies and decentralized syndicates of crime to give adversaries global reach at an unprecedented level.” If the photo montage in the video is to be believed, hackers will use outdoor electrical outlets to do grave digital damage, such as donning Guy Fawkes masks and filming segments of “Anonymous News.” This, we’re told, will somehow “add to the complexities of human targeting as a proportionally smaller number of adversaries intermingle with the larger and increasing number of citizens.”

“Megacities” posits that despite the lessons learned from the ur-urban battle at Aachen, Germany, in 1944, and the city-busting in Hue, South Vietnam, in 1968, the U.S. military is fundamentally ill-equipped for future battles in Lagos or Dhaka.

“Even our counterinsurgency doctrine, honed in the cities of Iraq and the mountains of Afghanistan, is inadequate to address the sheer scale of population in the future urban reality,” the film notes, as if the results of two futile forever wars might possibly hold the keys to future success. “We are facing environments that the masters of war never foresaw,” warns the narrator. “We are facing a threat that requires us to redefine doctrine and the force in radically new and different ways.”

Mike Davis, author of “Planet of Slums” and “Buda’s Wagon: A Brief History of the Car Bomb,” was not impressed by the video.

“This is a fantasy, the idea that there is a special military science of megacities,” he said. “It’s simply not the case. … They seem to envision large cities with slum peripheries governed by antagonistic gangs, militias, or guerrilla movements that you can somehow fight using special ops methods. In truth, that’s pretty far-fetched. … You only have to watch ‘Black Hawk Down’ and scale that up to the kind of problems you would have if you were in Karachi, for example. You can do special ops on a small-scale basis, but it’s absurd to imagine it being effective as any kind of strategy for control of a megacity.”

The U.S. military appears unlikely to heed Davis’s advice, however.

“This is the world of our future,” warns the narrator of “Megacities.” “It is one we are not prepared to effectively operate within and it is unavoidable. The threat is clear. Our direction remains to be defined. The future is urban.”

Top photo: An officer from the CORE police special forces aims his weapon during an operation to search for fugitives in the Complexo do Alemao favela on May 13, 2014, in Rio de Janeiro, Brazil, one of the world’s megacities. A Pentagon video forecasting the future of the world’s urban populations suggests that the U.S. military is fundamentally ill-equipped for future battles in megacities.