The U.S. Senate will soon decide whether Rex Tillerson, the longtime leader of the world’s largest oil and gas company, Exxon Mobil, is qualified to serve as the U.S. secretary of state.

His confirmation hearings this week came at a moment of climate emergency, when scientific studies indicate that dramatic international action is required to avoid massive deterioration of coastlines, intensification of drought, increased frequency of big storms, acidification of oceans, and all the other problems associated with climate change: mass migrations, violent conflicts, loss of languages, and species extinctions.

Although Tillerson faced a few tough questions from members of the Senate Foreign Relations Committee about his climate change record on Wednesday, he was also shown deference for his allegedly scientific views on climate, with senators particularly praising his perspective on the issue as that of an engineer.

And news stories favorably juxtaposed Tillerson’s acknowledgment of climate change with Trump’s 2012 tweet that the whole thing is a Chinese hoax.

But climate denial takes on many forms these days, some considerably more subtle than others, and at Wednesday’s hearing Tillerson displayed a mastery of obfuscation that only a son of Exxon Mobil, a chief benefactor of climate denial, could have achieved — ostensibly acknowledging climate change while still denying the need to actually do anything about it that might significantly slow the burning of fossil fuels. “Years of outright denial has lowered the bar to where someone says, as Tillerson does, ‘Yes I recognize greenhouse gases are causing a change in the atmosphere,’ and people are like, ‘Oh yay, he’s not a denier,’” said Stephen Kretzmann, head of the advocacy group Oil Change International. “I actually think Rex Tillerson is the worst case scenario for secretary of state on climate.”

Those listening to the hearing could be forgiven if they left believing Tillerson had committed to remaining a party to the Paris climate agreement, with its moderate goal of keeping the rise in earth temperature below 3.6 degrees. But his leaky language left plenty of space for promises to fall through. Tillerson said repeatedly that he would push for the U.S. to retain a “seat at the table.” Yet he noted President-elect Trump’s commitment to “America first,” and said that funding for international climate agreements would be reviewed from the “bottom-up.”

Asked by committee chair Sen. Bob Corker, R-Tenn., to succinctly state his “personal position” on climate change, Tillerson replied, “The increase in the greenhouse gas concentrations in the atmosphere are having an effect. Our ability to predict that effect is very limited.”

When Sen. Jeff Merkley, D-Ore., asked him to acknowledge the scientific finding that climate change increases the odds that certain types of extreme weather events will occur. Tillerson replied, “There’s some literature out there that suggests that; there’s other literature that says it’s inconclusive.”

Such obtuse answers are a hallmark of the contemporary denial movement and reveal a suspicious lack of enthusiasm about heeding what the most definitive studies say. Tillerson is right that we can’t predict exactly how deeply climate change will unravel us, but the range of possibilities laid out in innumerable studies warn against a wait-and-see attitude.

Despite Exxon Mobil’s promise under Tillerson to stop donating to some organizations that promote climate denial, the practice has continued. The company donated a reported $6.5 million to such groups from 2008 to 2015.

And while Tillerson in 2009 came out in support of a carbon tax, a policy that could reduce carbon emissions, he made that announcement at a moment when it conflicted with a major push for a bill that, had it passed, would have enshrined a totally different carbon reduction approach, called cap-and-trade.

The simple truth is that as Tillerson was shifting his corporation’s rhetoric away from climate doubt, he was also pushing forward a program of oil and gas extraction that, if it continues apace, would prevent nations from achieving the Paris agreement temperature goal.

The issue that senators focused on the most by far on Wednesday was Tillerson’s close relationship with Russia and his efforts with Exxon to convince the U.S. to end sanctions against the country, which stalled oil and gas deals reportedly worth billions.

But lost in that story has been the nature of the project Exxon Mobil had planned. In September 2014, Exxon and the Russian state oil company Rosneft discovered oil in the Russian Arctic Kara Sea only a week before U.S. sanctions went into effect against Russia for its annexation of Crimea.

According to Exxon, the Kara Sea licenses occupy an area “equivalent to all the leases in the Gulf of Mexico combined.” Arctic oil extraction is a long-term project — getting to the point where the oil is making it to market can take decades of work and an incredible investment of resources that, to be worthwhile, requires high crude prices. Because of this, a study published in Nature in 2015 stated that to achieve the 3.6 degrees emission scenario, no Arctic oil should be extracted. In fact, last May the oil company Total declared that it would not pursue Arctic exploration, because “the [3.6 degree] scenario highlights the fact that a part of the world’s fossil fuel resources cannot be developed.”

Meanwhile, Obama has banned drilling in large portions of the U.S. Arctic because of extreme conditions that make drilling difficult and cleaning up a spill even harder. Tillerson, for his part, pushed the U.S. government to embrace Arctic drilling. In 2015 he led an Arctic research group for the National Petroleum Council, an Energy Department advisory committee whose members mostly work for the industry, that published a report encouraging the Obama administration to expand Arctic opportunities in the U.S.

In an interview about that report with the Associated Press, Tillerson described a vision of long-term reliance on fossil fuels. “There will come a time when all the resources that are supplying the world’s economies today are going to go in decline. [Arctic oil reserves] will be what’s needed next. If we start today it’ll take 20, 30, 40 years for those to come on,” he said. “It’s back to that insatiable appetite that the world has for energy. Oil demand is going to continue to grow.”

Tillerson’s understanding of climate science and his stance on the Paris climate agreement could have major consequences for the planet. As secretary of state, he would become the agreement’s steward, playing a key role in determining how quickly countries decarbonize their economies and in holding the U.S. to its emissions pledges.

Failure to meet the Paris goal would likely have dire consequences for global populations. But the possibility of success is already spelling trouble for Exxon Mobil, because an agreement to burn fewer fossil fuels inevitably reduces the value of the vast oil and gas reserves currently held by the major oil companies.

In fact,the SEC in August began investigating whether the company was overvaluing the reserves that it plans to sell in the future. Similar probes have been launched by Attorneys General Eric Schneiderman of New York and Maura Healey of Massachussetts. A key aspect of those investigations is the question of whether Exxon Mobil deceived shareholders by failing to disclose its own decades of research, exposed by Inside Climate News and the Los Angeles Times, indicating climate change regulations could eventually prevent its product from going to market.

“Tillerson spent his career at a company whose current business model hinges on the failure of international efforts to address climate change, so that is really core to his entire working career and the DNA that he would bring to the role of secretary of state,” said Kathy Mulvey, corporate accountability campaigns director for Union of Concerned Scientists.

As secretary of state, Tillerson would be able to launch technology sharing programs like the Global Shale Initiative, launched under Hillary Clinton’s State Department, which involved teaching other countries to frack. He could help start electrification programs in energy-poor nations, like the State Department’s Power Africa program — although perhaps not with the current emphasis on renewables that has angered the coal industry. And in his tricky diplomatic negotiations he’d be able to use energy as a bargaining chip.

“You have a situation internationally where the big part of the climate problem that’s not being faced is the expansion of the fossil fuel industry. That is the part that Tillerson won’t touch,” Kretzmann said. “If you had a classic, full-on climate denier, the world would be that much more clear that they had to take leadership on their own. … People are going to say, ‘Well, we can talk to him on climate.’ And that’s going to be a problem.”

In fact, Tillerson repeatedly urged approval of the Keystone XL pipeline, which would have shipped tar sands oil out of the Kearl project, one of three Canadian oil sands projects that currently comprise more than a third of Exxon’s liquid reserves. Secretary of State John Kerry denied the pipeline a permit, a decision that will be up for reconsideration with Trump in the White House. Tillerson has downplayed the fact that oil sands release around 17 percent more greenhouse gases than conventional crude and would likely be unprofitable in a climate-safe energy market, stating that “despite what some claim, the greenhouse gas emissions from oil sands development are similar to many other heavy crudes.” 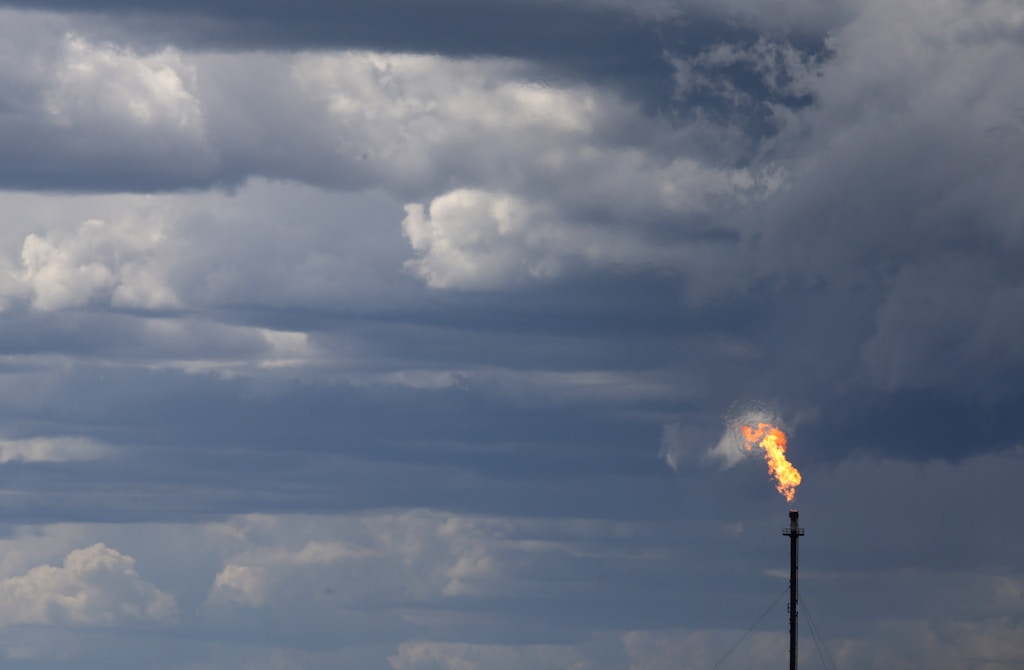 Tillerson ducked, “The question would have to be put to Exxon Mobil.”

“A little of both,” Tillerson replied.