James Comey, a Washington Operator, Knows How to Play the Game

Former FBI Director James Comey wrote memos about his meetings with Trump — and leaked them to prompt a special investigation. 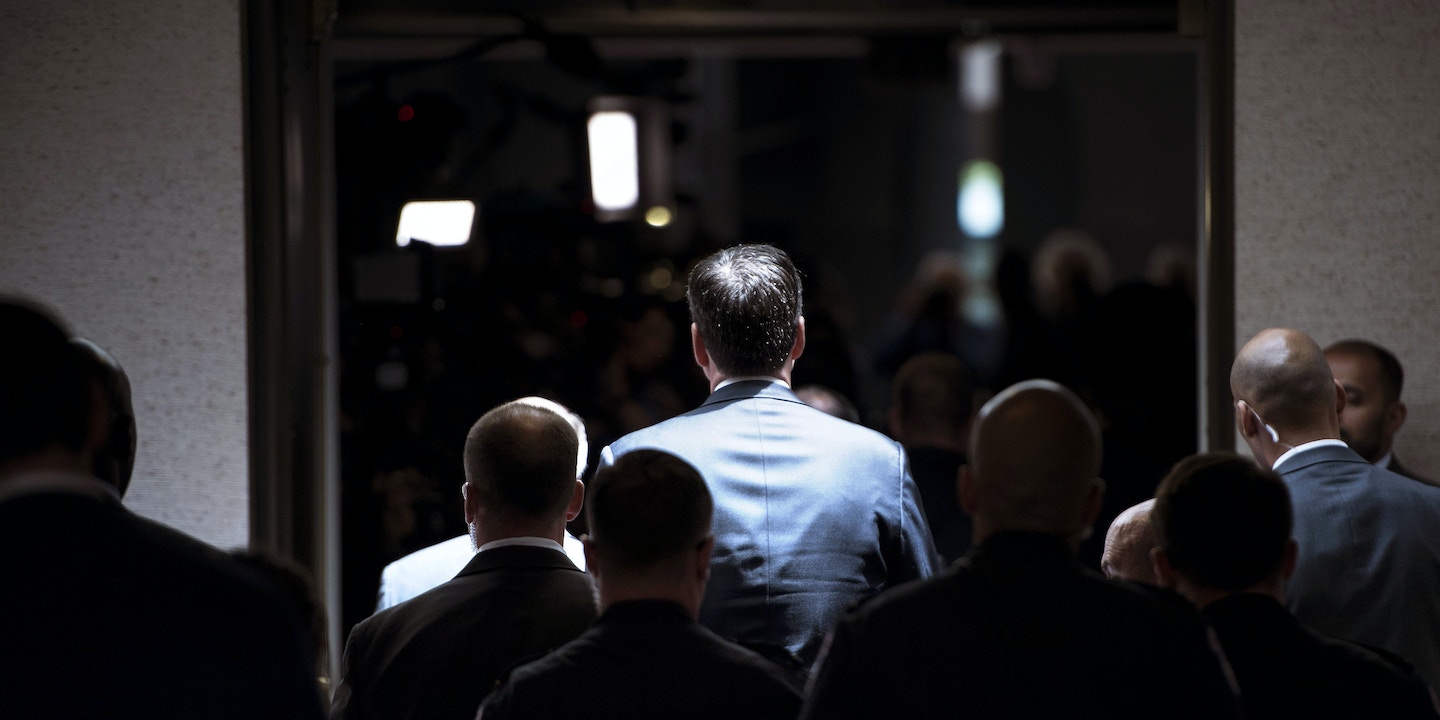 Former FBI Director James Comey cut an impressive figure during his sworn testimony before the Senate Intelligence Committee on Thursday. His presentation was poised, low-key, and almost cold-blooded as he laid out what amounted to a meticulously constructed case against President Donald Trump. Two overflow rooms and multiple live network broadcasts suggested that Comey’s mastery of public relations and the theater of government rivaled that of his former boss. The image of a decent government man dutifully saying his piece stood in defiant contrast to the atmosphere of vulgarity and naked self-interest that Trump has brought to the Oval Office.

But the character who appears in Comey’s written accounts of his meetings with Trump — the James Comey who the former FBI director asked the committee to believe — was a far humbler man than the one who showed up for the hearing. Despite Comey’s self-reported concerns that Trump’s pattern of inappropriate and possibly illegal conduct was a threat to the independence of the FBI, he never fully voiced those concerns to Trump’s face while he was among the nation’s top law enforcement officials. Instead, he wrote them down.

Today, Comey revealed that his release of details from his conversations with Trump was carefully timed to trigger the appointment of a special counsel, a development that could bring about the end of Trump’s presidency. Beneath the mask of the by-the-book, duty-driven Comey was a more cunning man, an operator who quickly identified a dangerous adversary and plotted several moves ahead in order to get the best of him.

Comey’s private accounting began on January 6, when he met Trump for the first time in a conference room at Trump Tower. Gen. James Clapper, the director of national intelligence at the time, asked Comey to stay behind and brief Trump on a dossier of salacious allegations that had been circulating in the media. Comey wrote, “I felt compelled to document my first conversation with the president-elect in a memo.” Today, he offered the committee a more detailed account of his motives. It was “a combination of things,” Comey said. “I think the circumstances, the subject matter, and the person I was interacting with.”

“Circumstances: First, I was alone with the president of the United States, or the president-elect, soon to be president,” Comey went on. “The subject matter: I was talking about matters that touch on the FBI’s core responsibility and that relate to the president-elect personally. And then the nature of the person. I was honestly concerned that he might lie about the nature of our meeting, and so I thought it really important to document. That combination of things I had never experienced before, but it led me to believe I got to write it down, and I got to write it down in a very detailed way.”

Comey said that he began chronicling the first meeting immediately upon getting back to his car, on a classified laptop. (Comey’s personal memos on Trump, he said on Thursday, were written in such a way as to avoid containing classified information.) His initial instincts about Trump’s integrity were correct. Trump fired Comey, offered a shifting and contradictory series of explanations, and claimed in a tweet that his meetings with Comey had been taped.

“Lordy, I hope there are tapes,” Comey said on Thursday. He said that Trump’s claim about tapes offered the prospect that his account of Trump’s conduct — including an explicit demand that Comey pledge his loyalty to Trump — could be corroborated. “Holy cow, there might be tapes!” is how Comey put it. “And if there are tapes, it’s not just my word against his.” 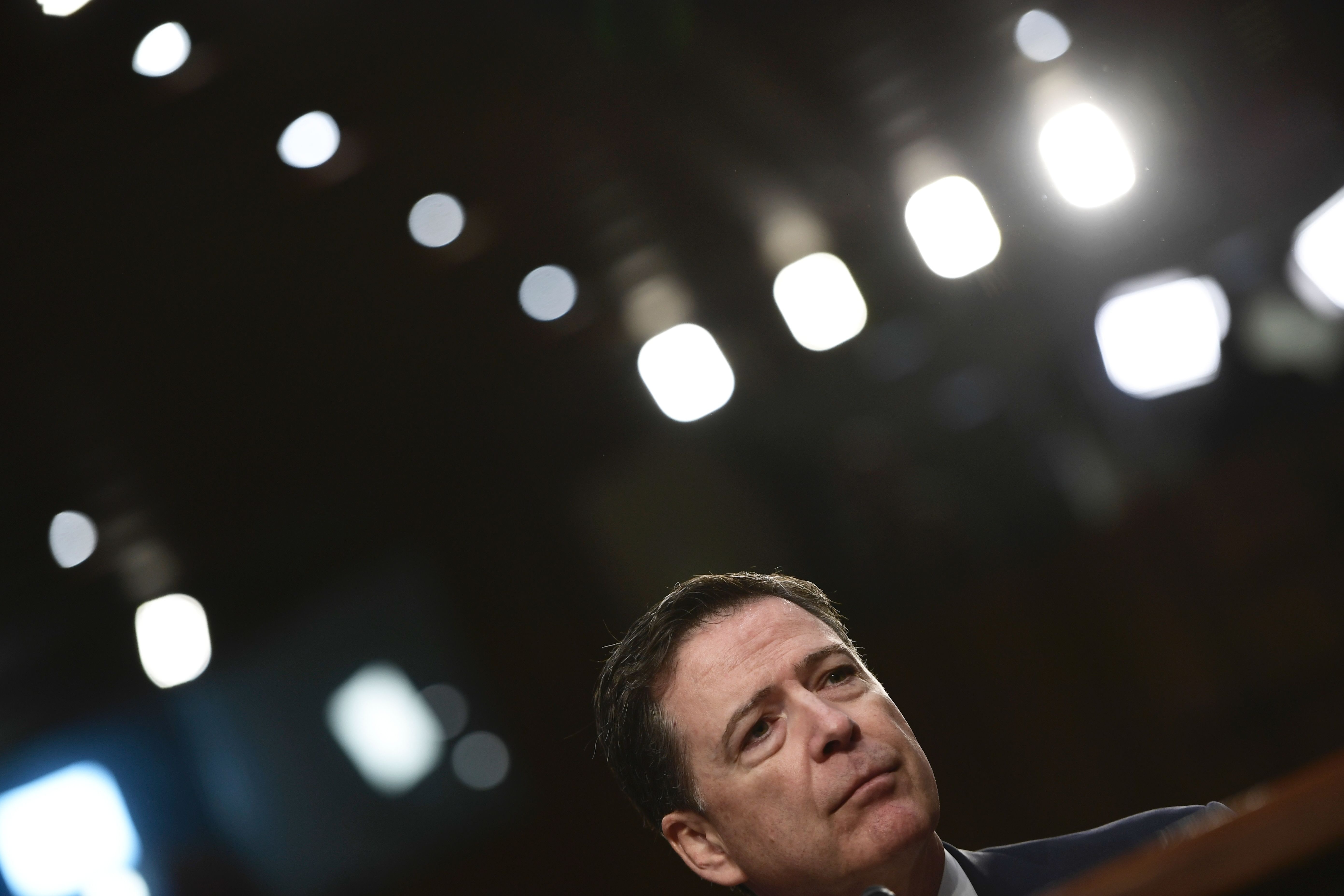 Former FBI Director James Comey speaks during a hearing before the Senate Intelligence Committee on Capitol Hill, June 8, 2017, in Washington.

Comey, who led an FBI that investigated multiple leakers of classified information under President Barack Obama, awoke in the middle of the night and decided to leak against the president. He gave portions of his records to a friend, whom he described as a law professor at Columbia University, who passed portions of them on to the media. “My judgment was that I needed to get that out into the public square,” Comey said. (A Washington Post reporter confirmed that the professor was Dan Richman.)

Comey knew exactly what would happen if he leaked the memo. “Didn’t do it myself for a variety of reasons,” he said, “but I asked him to because I thought that might prompt the appointment of a special counsel. So I asked a close friend of mine to do it.” When news of the memo — which recalled Trump’s request to back off investigating then-National Security Adviser Michael Flynn’s Russia ties — emerged in the New York Times in mid-May, it quickly became the loudest drumbeat toward a special investigation. A day later, Rod Rosenstein, the acting attorney general for the investigation into Trump’s Russia ties, appointed former FBI Director Robert Mueller to the special counsel position. Comey’s plan worked to a tee.

Comey said that he did try, at times, to educate the new president about the role of the FBI. “I also tried to explain to him why the FBI should be apart,” he said, speaking of the January 27 meeting, where, by Comey’s account, Trump asked for loyalty. “It got very awkward.” Comey’s statement said he told Trump that “blurring those boundaries” between the White House and the FBI “ultimately makes [White House] problems worse by undermining public trust in the institutions and their work.” Nevertheless, Comey wrote, Trump persisted in complaining to him about the FBI’s investigation of Flynn. Trump repeatedly called it “a cloud” over the White House.

Comey vigorously defended the intelligence community’s assessment that Russia attempted to interfere in the 2016 election. “It was an active measures campaign driven by the top of that government,” he said. “That happened. It is not a close call. That is about as unfake as you can possibly get.” He said he had seen no evidence that the Russians had succeeded in changing the actual vote. (Earlier this week, The Intercept released a top-secret NSA document describing Russian attempts to penetrate a private company that supplies voting software and the accounts of more than 100 local election officials.) Nor did Comey say whether the ongoing investigation of links between the Trump campaign and the Russian government had produced evidence of collusion.

Throughout the hearing, Comey was repeatedly asked about the role Attorney General Jeff Sessions played in the Russia-Trump saga. Comey and other senior officials at the FBI had decided to withhold Trump’s alleged pressure regarding the Flynn investigation from Sessions, their boss by virtue of his position atop the Department of Justice. In both his prepared remarks and his testimony, Comey maintained that Trump requested Sessions to leave the room during the February 14 meeting at the Oval Office in which the president asked the former FBI director to let go of the investigation into Flynn. “My impression was something big is about to happen,” Comey said of the moment Sessions was reportedly asked to step out. “My sense was the attorney general knew he shouldn’t be leaving.”

Comey claims to have shared the details of his conversations with the president with a circle of senior officials at the FBI. He said the group included “the deputy director, my chief of staff, the general counsel, the deputy director’s chief counsel, and I think in a number of circumstances, the No. 3 in the FBI, and a few of the conversations included the head of the national security branch.”

“I think they were as shocked and troubled by it as I was,” Comey said of Trump’s comments on Flynn. The question, Comey testified, then became, “Should we share this with any senior officials at the Justice Department?” He added that the FBI’s first priority was to ensure that the president’s comments were not shared with the FBI agents working the investigation into Flynn. Beyond that, Comey said, the plan was to keep the details of Trump’s comments close, to “hold it, keep it in a box.” He explained, “It was our word against the president’s.” Comey testified that he “specifically did not” tell Sessions about Trump’s comments on Flynn. “He was very close to and inevitably going to recuse himself for a variety of reasons” from the FBI’s Russia investigation, Comey said, which he described as “touching” but “separate” from the government’s investigation into Flynn.

How exactly Comey and his colleagues at the FBI knew that Sessions’s recusal was imminent is not entirely clear, though Comey did testify that there were additional facts regarding the decision not to inform Sessions that could not be described in open session. Following the February 14 conversation with Trump regarding Flynn, Comey claims to have asked Sessions to never again be left alone with Trump. “I report to you, it’s very important that you be between me and the White House,” Comey said of the message he conveyed to the attorney general. Comey testified that his request was met with silence, and that Sessions’s “body language gave me the sense, like, ‘What am I gonna do?’”

Did Trump’s conduct amount to obstruction of justice? “I don’t think it’s for me to say,” Comey replied when asked by Sen. Richard Burr, R-N.C., the committee’s chair. But Comey’s language could be interpreted to suggest that he now believes Trump committed a crime. A person committing obstruction of justice is defined by law as “whoever corruptly, or by threats or force, or by any threatening letter of communication, endeavors to influence” court proceedings, or “the administration of justice,” which could include the Flynn investigation. Comey used the word “endeavor” toward the end of his testimony. “I was fired because of the Russia investigation,” he said. “The endeavor was to change the way the Russia investigation was being conducted.” And Sen. Mark Warner, D-Va., said that Trump’s conduct on January 27 was a “threat.” “The president appears to have threatened the director’s job,” Warner said, “while saying, ‘I expect loyalty.’”