Memo to Democrats: You Need A Clear Message for Universal Health Care

To defeat Trumpcare for good, the Democrats need to find “words that work” with voters. And they need to embrace the left’s idea of health care for all.

In 2009, the noted Republican strategist Frank Luntz wrote a memo to GOP members of Congress, advising them on how to resist the Democrats’ health care reform bill that would go on to become Obamacare. “Stop talking economic theory,” he said, use “words that work,” and offer a viable conservative alternative. “It’s not enough to just say what you’re against,” instructed Luntz. “You have to tell them what you’re for.”

Fast forward eight years. The tables have turned and Democrats have spent the past few weeks trying to resist Trumpcare — in the form of a now-postponed health care bill from Senate Republicans that was supposed to “repeal and replace” Obamacare. The bill was condemned by a wide array of nonpartisan health care groups, including the American Medical Association (AMA) and the American Academy of Pediatrics (AAP), and, according to the independent Congressional Budget Office (CBO), would strip 22 million people of health insurance by 2026.

How did we get to this point? A point where Harvard researchers are warning of 217,000 additional deaths over the next decade from a loss of health coverage? Part of the blame has to lie with the Democrats, who failed to heed Luntz’s advice to the Republicans.

First, in defending Obamacare, they lacked “words that work.” For instance, how many people know, understand or even care what an “individual mandate” is? How about insurance “exchanges”? Or the “public option”? These technical terms and phrases have obscured more than they have clarified. They have also played into the hands of the Republicans, who have worked hard to ensure that the public view health care only through a partisan lens.

Remember: around one in three Americans is unaware of the fact that there is no difference between Obamacare and the Affordable Care Act (ACA) — they are one and the same. Many of these people tell pollsters that they like the ACA but dislike Obamacare. (Isn’t it odd how so many Americans’ view of a health care system changes when you put the foreign-sounding name of a black man in front of it?)

Second, Democrats have turned down opportunity after opportunity to offer a comprehensive health care alternative that guarantees coverage to all Americans (unlike Obamacare, which leaves around 27 million Americans uninsured.) During the Democratic primaries, Hillary Clinton said a single-payer “health care for all” system would “never, ever come to pass.” Inspiring, huh?

As for those on the left like Bernie Sanders and — belatedly — Elizabeth Warren, who are keen to offer a progressive alternative to both Trumpcare and Obamacare in the form of guaranteed, government-funded health care for all, they may have a clear and inspiring policy alternative but whether they have a clear and inspiring message for it remains to be seen. For example, according to a February 2016 poll by the Kaiser Family Foundation, “nearly two thirds (64%) of Americans say they have a positive reaction to the term ‘Medicare-for-all,’ and most (57%) say the same about ‘guaranteed universal health coverage.’ Fewer have a positive reaction to ‘single payer health insurance system’ (44%) or ‘socialized medicine’ (38%).”

The words don’t work and, as a result, ignorance abounds.

“About half (53%) of Democrats say they have a very positive reaction to ‘Medicare-for-all’ compared with 21 percent who say the same for ‘single payer health insurance system,’” according to the Kaiser poll. But to be clear: “Medicare-for-all” and “single payer” refer to… the same exact thing.

So then “Medicare-for-all” must be the way to go, right? Rather than the bureaucratic-sounding and yawn-inducing “single payer”? Perhaps. Invoking Medicare to make the case for a system in which the government covers the cost of all health care claims, however, may not be the silver bullet that some on the left seem to think it is. Not everyone associates Medicare with the government. Remember the anti-Obamacare town halls in the summer of 2009, where attendees carried placards that read “Keep government out of my Medicare”? An August 2009 poll found that 39% of Americans said they wanted government to “stay out of Medicare” — which is, of course, impossible.

Why don’t progressives go with the simpler option of calling their single-payer proposal “universal health care”? Or “health care for all”? In San Francisco, a single payer system called “Healthy San Francisco” was launched a decade ago and has had very high approval ratings. How about Sanders, Warren et al push for a federal version called “Healthy America”?

Names and phrases matter. Why should conservatives have all the best tunes? As a Briton living in the United States, I can’t help but miss the UK’s National Health Service, the NHS, which is more popular with the British public than both the Royal Family and the armed forces. 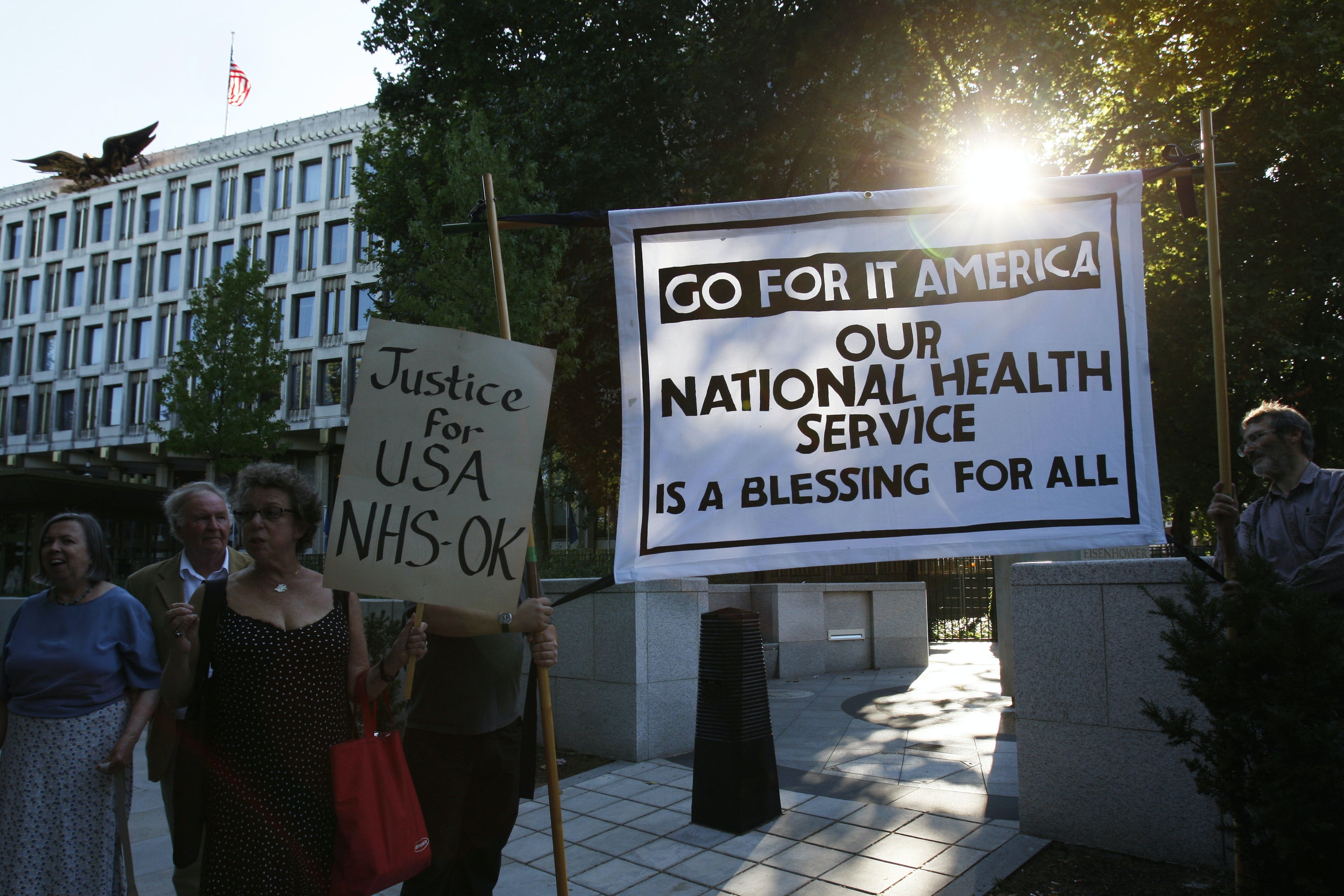 Why? Not only because “international comparisons show that the NHS outperforms other countries, including the U.S., in terms of quality of care, efficiency, access and equity,” to quote health economist Andrew Street. It has always been clear what the NHS is and what it stands for. There is no need for “individual mandates”; no concept of “pre-existing conditions.” The NHS was founded, the legendary Labour health secretary and proud socialist Aneurin Bevan explained in 1948, on three core principles: that it “meet the needs of everyone,” that it “be free at the point of delivery,” and that it be based on “need, not ability to pay.”

UK governments of both right and left have signed up to these core principles. Almost 70 years after Bevan’s launch of the health service, it was Conservative Prime Minister David Cameron who, referring to the “magic” of the NHS, said: “You don’t have to produce your wallet or your credit card, you get great treatment because it’s a birthright of being British that we have a National Health Service that is free at the point of use and available to all who need it.”

Can you imagine a leading Republican describing free health care as a “birthright” for Americans? Where is the pressure on them to do so? Democrats should take a leaf out of Britain’s book. The NHS is a third rail of British politics because it is based on simple and popular principles. Complexity is the enemy of progress.

Back in February, President Trump was mocked for telling a meeting of governors at the White House that health care reform is “an unbelievably complex subject. Nobody knew that health care could be so complicated.”

These are the very simple and direct questions that Democrats should be asking of their Republican opponents — and of the American people.

Top photo: Protesters gather across from Trump Tower to rally against the repeal of the Affordable Care Act March 24, 2017, in Chicago.