Born in the United States, Learning to Live in Mexico Alexandra, a 13-year-old with long hair and a wry smile, misses her school in Sacramento. Now that she lives in Tijuana, Mexico, her mother is stricter, always worried about her safety, and won’t let her go to the movies alone. She hates wearing a uniform and is struggling in school.

“Sometimes you just think about it and you’re like what am I doing here?” she said. “I was born over there and so why am I here?”

Alexandra was among a group of young Mexican-American teenagers gathered in the courtyard of Sindicato Alba Roja secondary school in Tijuana in June. They are the children of families that represent the border city’s multinational identity. Many of them were born in the United States and are U.S. citizens, but their parents are not, and their lives are shaped by conflicting realities of family obligation and the opportunities of dual citizenship. 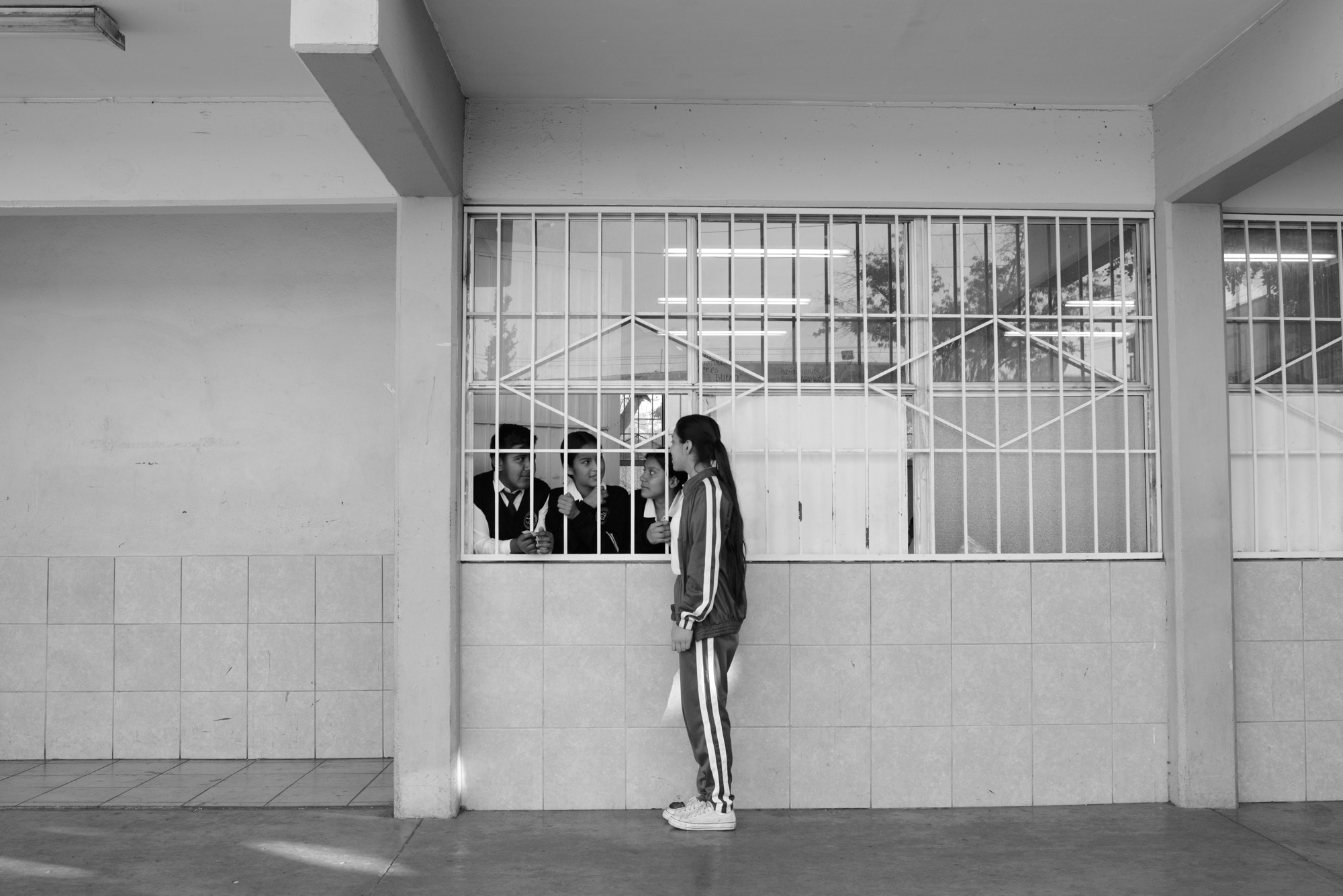 Alexandra, 13, talks to classmates at Escuela Secundaria Sindicato Alba Roja, on June 15, 2017. She came to Tijuana from Sacramento, Calif. in 2015. She and her siblings are U.S. citizens, but her mother is from Guatemala and has no legal status in either the United States or Mexico. The border wall where it tapers into the Pacific ocean in Playas de Tijuana.

Some of the children’s families were forced back to Mexico because their parents were deported. Others came to Tijuana because of family emergencies or other obligations and got stuck, with undocumented relatives unable to cross back.

Nery Tepeque lived her entire adult life in the desert town of Banning, in southern California, but never regularized her immigration status. When her mother died in 2012, she rushed home to Tijuana, and then was caught by U.S. authorities trying to cross back with a fake passport. So she brought her two young teenagers to Tijuana to live with her in her mother’s old house, which hasn’t been easy. The kids don’t have Mexican citizenship, so they have had problems getting access to social programs and healthcare. She says that education costs in Tijuana add up – there are no school breakfasts or lunches, and they have to buy their own books and uniforms, and pay a yearly security fee.

But, Nery said, “I told the kids, don’t feel bad, when you’re older you can choose where you want to live.” 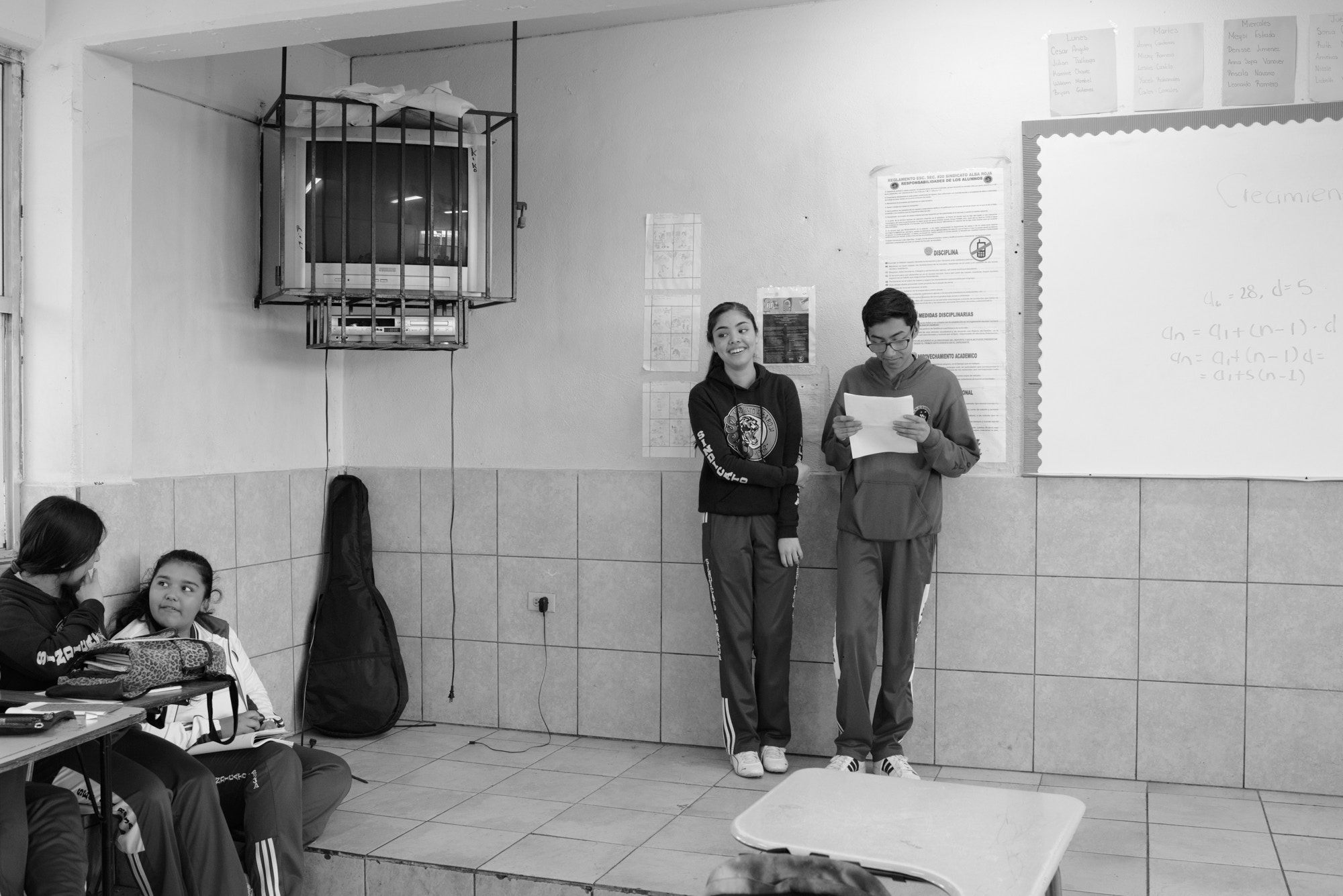 Students work on a math problem at Escuela Secundaria Sindicato Alba Roja. Alexei, a 14-year-old student at the school who used to live in Los Angeles, said he when he first came to Tijuana, he “didn’t know how to speak Spanish, didn’t know nothing about Mexico.” A sign showing the way to the pedestrian border crossing at the San Ysidro port of entry. Many of the children said that when they are old enough to cross without an adult, they’ll go to school or work in San Diego. Fifteen-year-old Pricilla said she looked forward to when “I’ll be old enough to cross on my own to do shopping for my mom.”

There are about 9,300 students who came from the United States in the state of Baja California, according to statistics provided by state education authorities — a higher percentage of the student population than any other state in Mexico, and a testament to the long history of families coming and going across the border. Schools are bracing for the promised spike in deportations under the Trump administration, though it’s still too soon to see an effect in school enrollment. A new policy enacted this spring is supposed to make it easier for children raised abroad to get the documents they need to access state services in Mexico, which was a persistent issue for the U.S.-born students we spoke with.

Some students struggle with Spanish when they first arrive — Mexican public school curriculum is set at the national level, there are no bilingual schools, and language support is limited — but Adrián Flores Ledesma, representative for the state education system in Tijuana, said that, “the primary problem is emotional, not educational.” And so, for about a decade, Baja California has run support groups in schools to help kids who come from the United States to adjust and connect with one another.

Left photo: Jennifer Arellano Hernández, 14, walks in the schoolyard at Escuela Secundaria Sindicato Alba Roja. Jennifer’s father was deported, and she joined her parents in Tijuana four months ago. Right photo: the wall marking the border between the United States and Mexico in Playas de Tijuana. A fence marking the border between Mexico and the United States, seen through a larger fence on the Mexican side in Playas de Tijuana. Uriel González, director of Casa YMCA, a shelter for migrant youth, said he mostly encounters Mexican kids who were caught trying to cross the border and quickly removed, not so many children who were deported with their families after long stays in the United States. “We are waiting to see how effective Trump’s deportations are,” he said. “The best ally that his campaign had was the media – putting a lot of attention to his hate speech, putting fear in the migrant community.”

Left photo: Robert Tepeque Jr., 14 and Pricilla Tepeque, 15, in their living room. Robert said, “I don’t really feel stuck because I know I can go back.” He plans to cross the border daily to San Diego when it comes time for high school, so that he can play sports.

The support groups aim to create “a space for catharsis,” Ledesma said, particularly for teens whose first impulse when thrown into an unfamiliar school system may be to give up and drop out.

“Generally these kids left everything behind, because from one day to the next it was an emergency situation,” he said, “They left their clothes, their personal things, everything, and the next day they arrive in Tijuana. They get to a relative’s house, where they don’t fit, they don’t have a room, maybe they’re in the living room, no private bathroom. And all these things make them feel resentful of their parents, and think, why are they in Mexico, if they are Americans? So we also work with the parents, so they don’t feel that sense of guilt.” Jennifer, 14, embraces her mother, Maricela, at pickup after school. Maricela grew up undocumented in the United States and now earns low wages in a call center, speaking English with Avis and Metro PCS customers.

Ledesma said the groups are mandatory for new students from the United States, but not all the children at Alba Roja had been through them. Instead, they found their own ways of coping.

Jennifer Arellano Hernández, a bubbly 14-year-old, lived in Las Vegas, Nevada until a few months ago. After her father was picked up for driving without a license and then deported, she stayed with her aunt and uncle in for a few months before her parents insisted she come to Tijuana. At first she was furious at them for taking her away, and “got really depressed.” 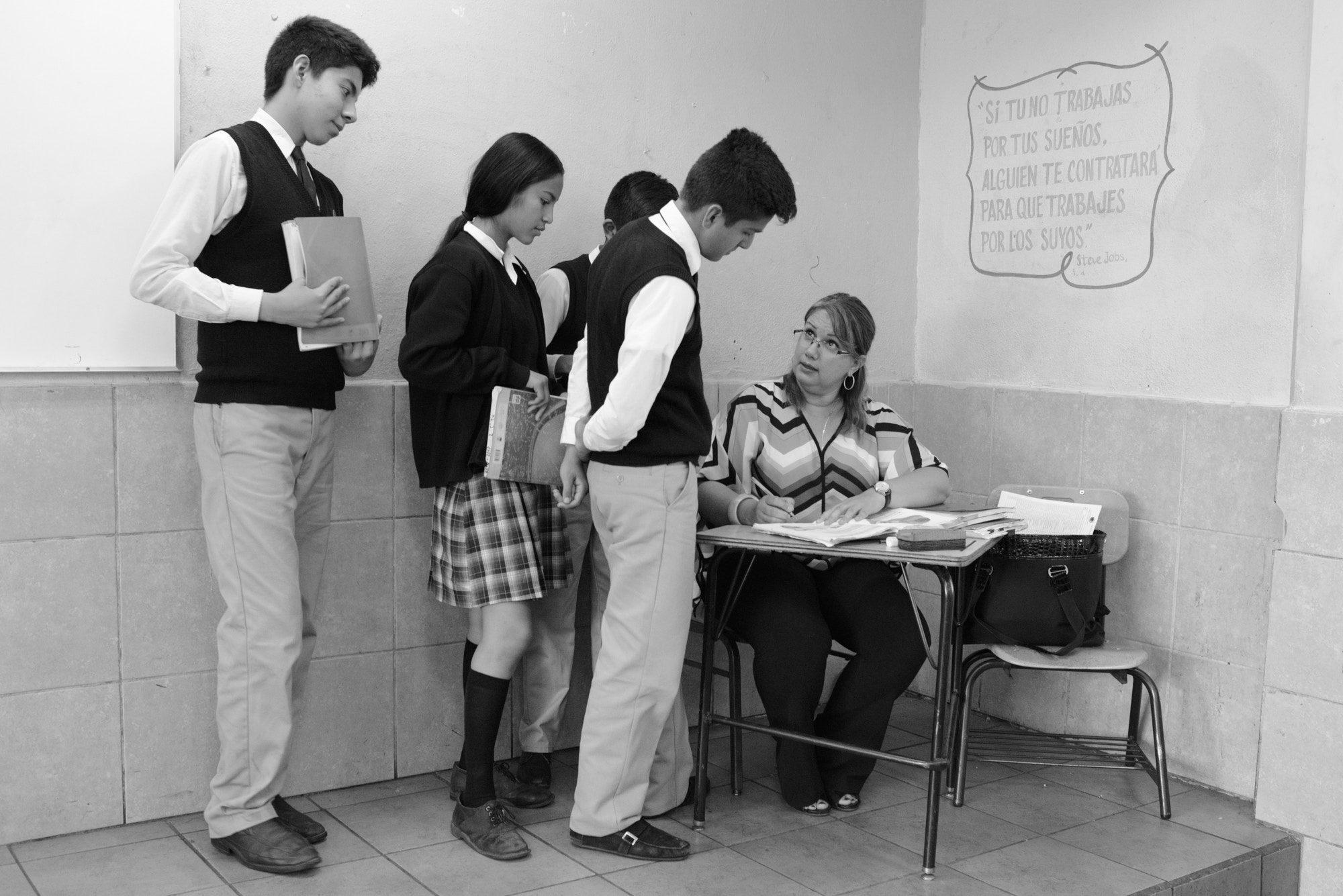 An English teacher checks student work at Escuela Secundaria Sindicato Alba Roja. The painting on the wall is a translation of a quote attributed to Steve Jobs: “If you don’t build your dreams, someone will hire you to help build theirs.” A poster shows students competing for class king and queen in the schoolyard at Escuela Secundaria Sindicato Alba Roja. A school administrator admitted that “the schools here are very different – over there they have gyms, fields, technology. So the kids feel that they are going backwards.” But, he said, “kids adapt very quickly.”

Jennifer now lives with her mother and two younger siblings in a few sparse rooms in a tough apartment complex; her mother, Maricela, works in a call center doing customer support for Avis rental car and Metro PCS (“it’s full of people who have been deported,” Maricela said.) But Jennifer’s father just got a work visa for France, and wants to bring the family there to start over.

“My dad once asked me what I wanted to be when I grew up, and I told him I want to be a therapist, because they get paid a lot and they help people. And he said, ‘just imagine a therapist that can speak two languages,’ and I was like, he’s right! It’s way better, you can understand both people.” Alexander, 13, in Spanish class at Escuela Secundaria Sindicato Alba Roja. After his parents were deported, Alexander stayed with his grandmother in southern California for three years. But he came back to Tijuana he said, because “I felt lonely most of the time. My grandma worked a lot so I was feeling loneliness, so I came over here to be with my parents.” Students play in the schoolyard of the Jardin de Niños Xochimilli. Sometimes families up and leave Tijuana schools without warning, the school director said. “We do have children who leave school,” because their parents migrate, she said. “They don’t always tell us. The other children ask and ask and ask where they are, and then after a while they understand.”

Top photo: Students play in the schoolyard of the Jardin de Niños Xochimilli.