The U.S. has provided record levels of fuel for Saudi coalition jets this year, but Congress passed on a vote to increase accountability for civilian harm. 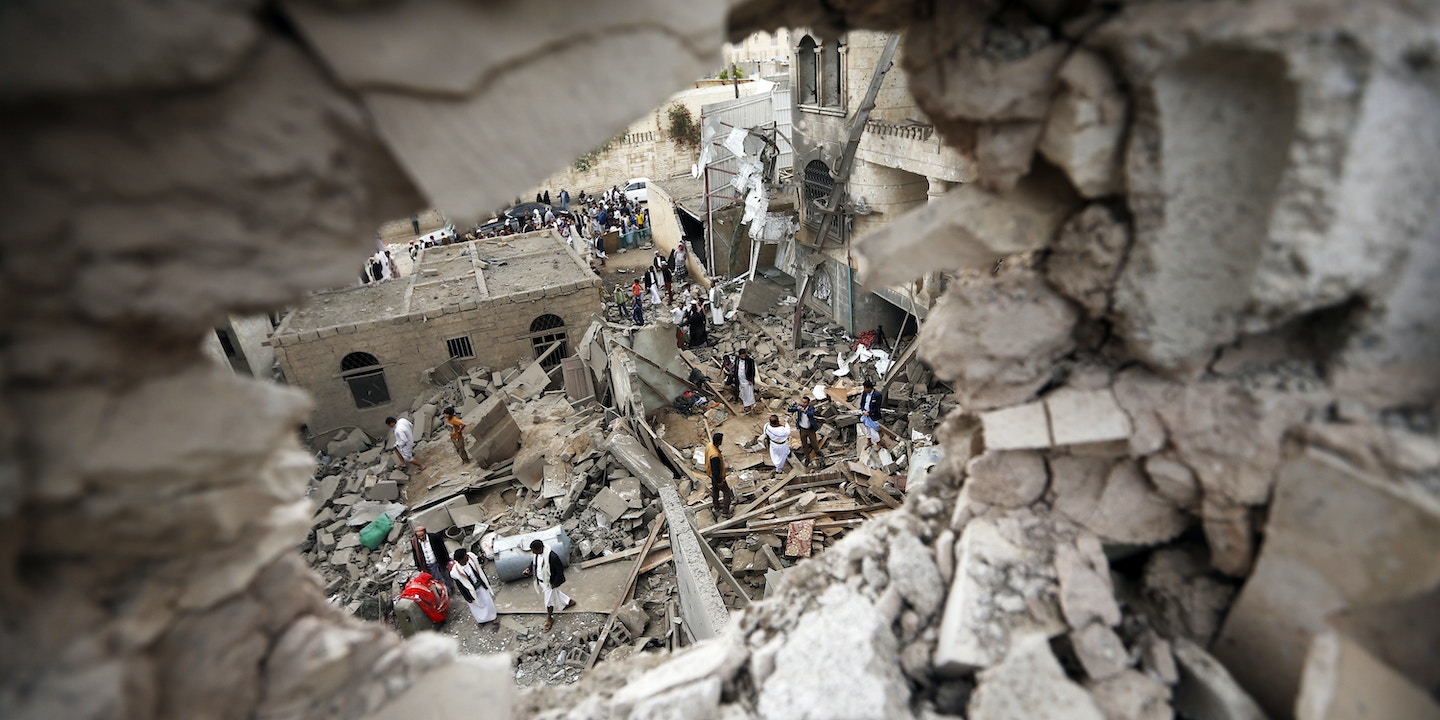 Update: September 18, 2017, 12:15 p.m.
For this piece, the U.S. military provided, as it has to many other outlets, figures that it represented as refueling for the Saudi coalition. Subsequent reporting by The Intercept has uncovered that these figures are for a number of operations in the “Horn of Africa” area. That new reporting also showed apparent inconsistencies plaguing a refueling database maintained by the Air Force.

Last October, an airstrike in Yemen by the Saudi-led coalition hit a funeral, killing more than 130 people and drawing global condemnation. Yet in the months following that strike, the United States doubled the amount of fuel it provided to coalition jets, according to figures obtained from the U.S. military. The numbers underline the fact that U.S. support for the campaign has continued and even increased despite growing attention to civilian casualties and alleged war crimes by the coalition.

But the House of Representatives just passed over the chance to vote on legislation that would have tracked the fuel the Pentagon gives to the Saudi coalition and prohibited refueling of coalition aircraft unless the Pentagon could assure Congress that subsequent missions wouldn’t hit civilians or targets contained on no-strike lists.

An amendment to the National Defense Authorization Act, filed by Democratic Rep. Ro Khanna of California with bipartisan support, failed to pass the Rules Committee last night, and so it won’t be up for a vote. Khanna’s amendment would have “at the very least require[d] reporting to Congress about exactly how many flights are being refueled, where the location is and verification that they aren’t involved in civilian deaths,” the congressman told The Intercept.

“I am disappointed that the House will not vote on amendments that would enforce greater oversight of U.S. operations in Yemen,” said Khanna. “Congress is doing a disservice in not acknowledging the civilian impact of our military operations in the Middle East. We must instill measures to prevent further atrocities in Yemen.”

On March 25, 2015, the Obama administration announced support for Saudi Arabia’s campaign against Houthi rebels and allied forces, who had seized swaths of the country, including the capital, Sana. The next day, CENTCOM commander Gen. Lloyd Austin told senators that he didn’t know “the specific goals and objectives of the Saudi campaign.” The U.S. has since offloaded more than 67 million pounds of fuel to coalition jets — refueling aircraft more than 9,000 times — according to Air Force figures provided to The Intercept.

According to conservative United Nations estimates, the Saudi coalition is responsible for at least 3,133 civilian deaths in Yemen since the U.S. support began. That represents more than 60 percent of all civilians confirmed killed in hostilities since 2015. The Houthis and forces loyal to former President Ali Abdullah Saleh have also been documented firing indiscriminately into civilian areas, planting land mines, and obstructing aid convoys.

The Yemen Data Project, which monitors open source reports of airstrikes in Yemen, has recorded more than 13,081 coalition raids through June 2. Roughly a third hit non-military targets, the group found.

Two months after the October “double tap” funeral strikes in Sana, the Obama White House blocked the sale of precision guided munitions to Saudi Arabia — a sign of protest against a campaign it had backed for 18 months, and against a country for which the administration had already approved weapons sales surpassing $100 billion.

Though CENTCOM said the United States hadn’t refueled any planes on the day of the funeral attack, refueling shot up afterward — from 2.02 million pounds in October to 3.69 million in December. It hit a record of 4.2 million pounds in January — a month split between the Obama and Trump administrations. Refueling stayed at near-record levels through March (4.03 million) before falling in May and June. During 2017 average monthly totals are up by nearly a third compared to 2015 and 2016.

Khanna says Congress remains largely in the dark about the refueling and can only assume it is abetting civilian deaths.

“From a strategic perspective, it makes no sense,” he told The Intercept. “From a moral perspective, we ought not to be contributing to refueling to flights that are causing civilian deaths and are devastating the infrastructure of a society.”

But who exactly is getting the fuel to begin with? The answer, in the vast majority of cases, isn’t Saudi Arabia.

“Most of the refueling does not actually go to specifically Saudi air force aircraft,” said Pentagon spokesperson Maj. Adrian Rankine-Galloway. “The Emirati air force are the primary air force that we help refuel.”

The United Arab Emirates has taken on an increasingly active role in Yemen, running ground campaigns along the western coast and against Al Qaeda targets in the South. Operations along the coast include troops from Sudan, a country that the U.S. currently sanctions. The Pentagon has weighed how deeply to back a proposed UAE-led operation to capture Yemen’s largest port, Hodeidah, from the Houthis.

The U.N. has warned such a move against Yemen’s largest port could spell catastrophe amid what is already one of the world’s most dire humanitarian crises.  Some 7 million Yemenis are on the brink of famine, including 500,000 severely malnourished children. A cholera outbreak has spun out of control, likely infecting more than 320,000 people and killing more than 1,740. A coalition-imposed flight ban on Sana has left the entire north of the country cut off, and prevented journalists and human rights workers from entering the country.

The UAE has also worked closely with the United States to fight Al Qaeda’s affiliate in Yemen, Al Qaeda in the Arabian Peninsula, or AQAP. In April of last year, Emirati forces captured the southern city of Mukalla from AQAP. This January, just days after President Trump took office, Emirati forces were reportedly involved in a controversial U.S. raid that claimed the lives of dozens of civilians and killed a Navy Seal. In June, the Associated Press revealed that the UAE is running a network of detention centers in southern Yemen were torture was employed. The Pentagon admitted that U.S. personnel interrogated prisoners held by the UAE, though they denied any knowledge of abuses.

“They are the United States’ favorite fixer in the region at the moment,” said Al-Muslimi. “They are more trusted and flexible than the Saudis, and a ‘lighter’ Sunni ally in counterterrorism that gives the United States a freer hand in Yemen.”

Neither the Saudi coalition nor the Emirati Embassy in Washington, D.C., responded to questions about their activities in Yemen.

Other amendments to the NDAA could also have an impact on U.S. assistance. One filed by Democratic Rep. Ted Lieu of California would require the Pentagon and State Department to report on the actions of the Saudi coalition in Yemen, did pass the rules committee, and will be voted on. Though it requests information on U.S. military support, the amendment doesn’t contain the same restrictions or detailed reporting requirements as Khanna’s.

“We know the United States is refueling coalition aircraft on bombing missions, but the United States has not disclosed whether aircraft refueled have gone on to strike markets, hospitals, or homes,” said Kristine Beckerle, Yemen researcher at Human Rights Watch. “The Pentagon should be disclosing this information to the public, and if it won’t, Congress should demand it.”