U.S. presidents before Trump have rarely cared about international law, but at least they generally pretended like they did. 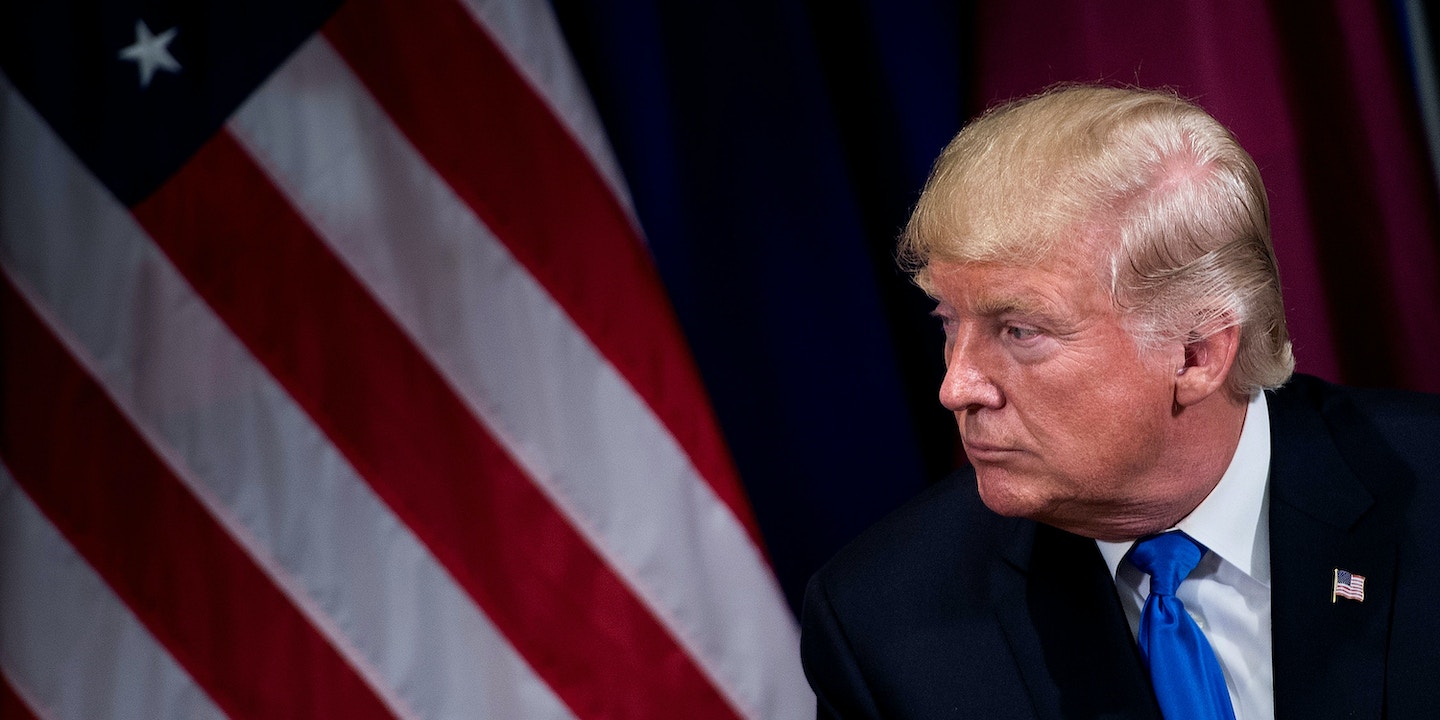 The United States has never cared much about international law. But most U.S. presidents had at least made an effort to pretend that they did. Based on President Donald Trump’s speech Tuesday to the United Nations General Assembly, this is yet another American tradition that he’s discarding.

Trump’s overturning of this American norm came during his blusterous threats against North Korea:

The United States has great strength and patience, but if it is forced to defend itself or its allies, we will have no choice but to totally destroy North Korea. Rocket Man is on a suicide mission for himself and for his regime. The United States is ready, willing and able, but hopefully this will not be necessary. That’s what the United Nations is all about; that’s what the United Nations is for. Let’s see how they do.

To clarify the legal significance of Trump’s words, here’s a quick explanation of the rules that purportedly govern the U.S.’s use of force.

The U.S. was one of the original 26 signatories to the U.N. Charter in June 1945. The U.S. Constitution states that “all Treaties made, or which shall be made, under the Authority of the United States, shall be the supreme Law of the Land.” The U.N. Charter is a treaty, so it therefore is the “supreme law” of the U.S.

Chapter I, Article 2 of the charter states, “All Members shall refrain in their international relations from the threat or use of force against the territorial integrity or political independence of any state, or in any other manner inconsistent with the Purposes of the United Nations.”

However, Chapter VII, Article 51 says, “Nothing in the present Charter shall impair the inherent right of individual or collective self-defence if an armed attack occurs against a Member of the United Nations, until the Security Council has taken measures necessary to maintain international peace and security.”

Moreover, prior to the establishment of the U.N., it was customary international law that nations had the right to attack others first in preemptive self-defense under narrow conditions. Those conditions were based on a formulation in an 1841 letter by then-U.S. Secretary of State Daniel Webster. According to Webster, an attack was only legitimate preemption if the need for it was “instant, overwhelming, leaving no choice of means, and no moment for deliberation,” and the attack itself was “limited by that necessity, and kept clearly within it.” This has generally been boiled down to two requirements: A threat must be clearly imminent, and any military action must be proportional to the threat.

The right to preemptive self-defense is still generally accepted today — despite the fact that, as Henry Shue and David Rodin, two prominent academic experts on international law, point out, “A literal reading of the Charter … appears to rule out the justified use of force prior to attack.”

So what does all this mean for Trump and the “Law of the Land”?

Certainly there’s an argument that Trump’s diatribe violated the U.N. Charter, given its prohibition against even the “threat … of force against the territorial integrity or political independence of any state.” (Political journalist Tim Shorrock, among others, pointed this out on Twitter.)

This is particularly true given the vagueness of Trump’s statement about the U.S. being “forced to defend itself or its allies.” This could mean anything from an actual first-strike nuclear attack by North Korea on the U.S. or South Korea, to Kim Jong-un making fun of the ratings for “Celebrity Apprentice.”

So a president who wanted to be sure he was acting in accordance with the U.N. Charter would have said something like, “If North Korea attacks the U.S. or its allies, we are prepared to respond immediately with all necessary force until the U.N. can take charge of restoring peace and security.” Even former President George W. Bush, whose administration despised and subverted the U.N., was willing to mouth words like this. In his September 2002 speech to the General Assembly laying the groundwork for war with Iraq, Bush proclaimed, “My nation will work with the U.N. Security Council to meet our common challenge. If Iraq’s regime defies us again, the world must move deliberately, decisively to hold Iraq to account.”

On the other hand, if Trump administration lawyers could be bothered to address this question, they would certainly claim that Trump was making a legitimate, if strongly worded, statement of deterrence.

Where there can be little argument, however, is whether Trump was threatening to shatter the rules about preemptive war.

Jonathan Horowitz, a senior legal officer at the Open Society Foundations, points out that the required “proportionality and necessity are nowhere to be found” in Trump’s words.

Again, this is notably different from Bush’s case for the Iraq war. Faced with the fact that international law demanded that a threat be “imminent” to justify preemptive war, the Bush administration simply redefined the meaning of the word in its 2002 National Security Strategy. “We must adapt the concept of imminent threat to the capacities and objectives of today’s adversaries,” the document read, in a world where weapons of mass destruction can be “used without warning.”

According to Marko Milanovic, associate professor at the University of Nottingham School of Law and vice president of the European Society of International Law, the Bush standards “are not accepted even by the closest U.S. allies, such as the U.K.” And, given that Trump has not made even Bush’s desultory nod at the standard of imminence, “he might not necessarily have in mind what the overwhelming majority of international lawyers or states would recognize as self-defense.”

“The starting point shouldn’t be total destruction,” said Horowitz, pointing to norms governing proportionality. “We’re talking about a country that spans over 45,000 square miles with a population of 25 million.” Milanovic agreed, calling Trump “morally repugnant for treating the 25 million people of North Korea as something to be extinguished at will” and adding that “it is impossible to imagine an attack that North Korea could mount that would justify totally destroying the whole country.” So where Daniel Webster demanded that any preemptive military action be “kept clearly within” necessity, Trump casually committed to the obliteration of an entire nation based on some amorphous criteria known only to himself.