White men who carry out mass shootings are primarily described as “lone wolves,” but Muslims are called “terrorists.”

Last night, the United States experienced the deadliest mass shooting in modern American history. At least 58 people are dead and over 500 more wounded. No, that’s not a typo: More than 500 people were injured in one single incident.

As tens of thousands enjoyed a music festival on the streets of Las Vegas, 64-year-old Stephen Paddock of Mesquite, Nevada, was perched 32 floors above them in his Mandalay Bay hotel room. Paddock had 19 rifles and hundreds of rounds of ammo — supplies that are plentiful in a nation that has more guns than people. A few minutes after 10 p.m., Paddock opened fire on the unsuspecting crowd. They were sitting ducks.

No expensive wall along the Mexican border would’ve prevented this. No Muslim ban stopping immigrants and refugees from a few randomly selected countries from reaching our shores would’ve slowed this down.

Paddock, like the majority of mass shooters in this country, was a white American. And that simple fact changes absolutely everything about the way this horrible moment gets discussed in the media and the national discourse: Whiteness, somehow, protects men from being labeled terrorists.

The privilege here is that the ultimate conclusion about shootings committed by people from commonly nonwhite groups often leads to determinations about the corrosive or destructive nature of the group itself. When an individual claiming to be Muslim commits a horrible act, many on the right will tell us Islam is the problem. For centuries, when an act of violence has been committed by an African-American, racist tropes follow — and eventually, the criminalization and dehumanization of an entire ethnic group. 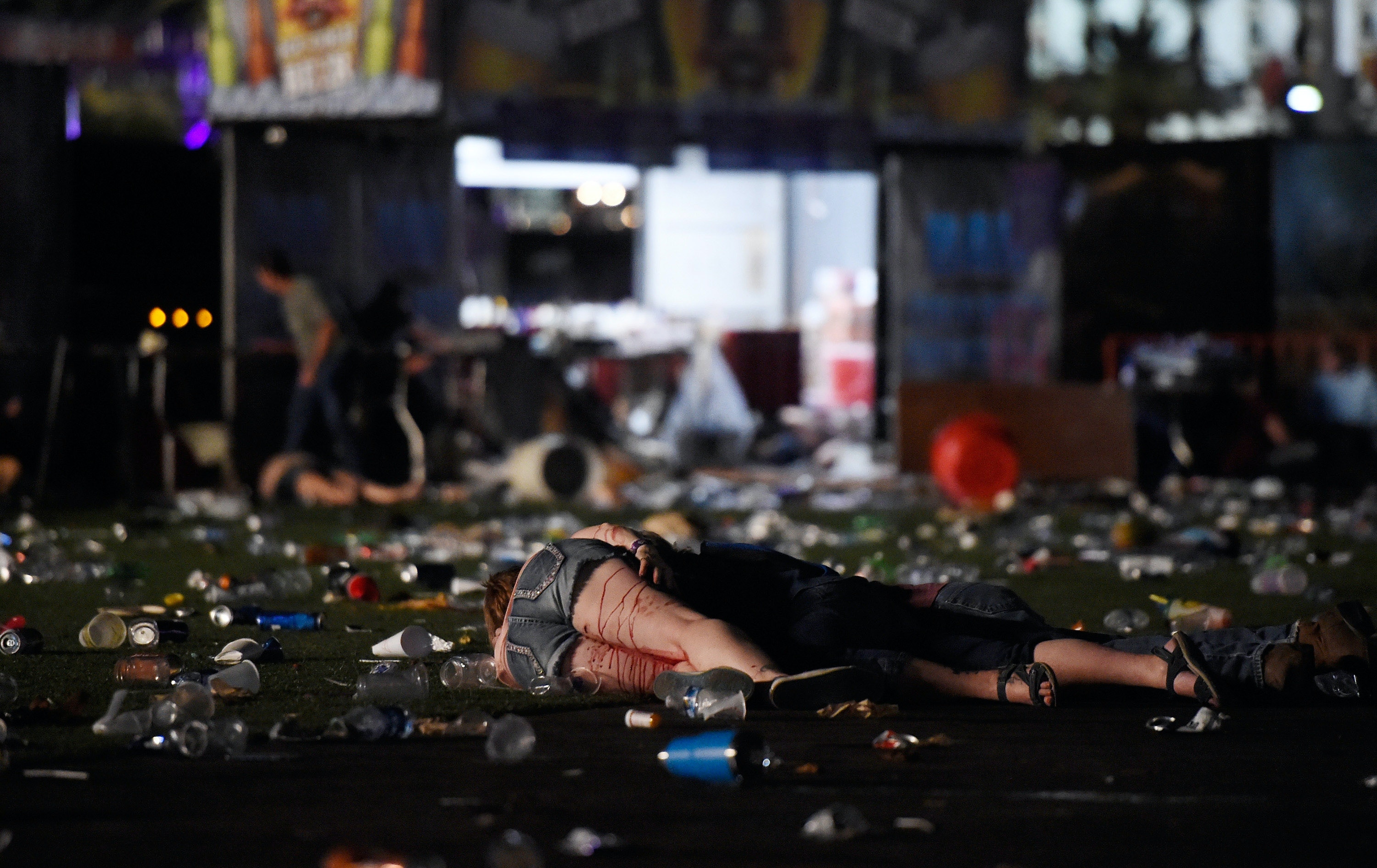 A bloodied victim lies on the ground during a mass shooting at the Route 91 Harvest country music festival on Oct. 1, 2017, in Las Vegas.

Privilege always stands in contrast to how others are treated, and it’s true in this case, too: White men who resort to mass violence are consistently characterized primarily as isolated “lone wolves” — in no way connected to one another — while the most problematic aspects of being white in America are given a pass that nobody else receives.

Stephen Paddock’s whiteness has already afforded him many outrageous protections in the media.

While the blood was still congealing on the streets of Las Vegas, USA Today declared in a headline that Paddock was a “lone wolf.” And yet an investigation into his motivations and background had only just started. Police were only beginning to move to search his home and computers. His travel history had not yet been evaluated. No one had yet thoroughly scrutinized his family, friends, and social networks.

Paddock was declared a “lone wolf” before analysts even started their day, not because an exhaustive investigation produced such a conclusion, but because it is the only available conclusion for a white man in America who commits a mass shooting.

“Lone wolf” is how Americans designate many white suspects in mass shootings. James Holmes was called a “lone wolf” when he shot and killed 12 people at a movie theater in Aurora, Colorado. And Dylann Roof, the white supremacist who walked into a church in Charleston, South Carolina, and shot and killed the pastor and eight other parishioners, was quickly declared a “lone wolf.”

For people of color, and especially for Muslims, the treatment is often different. Muslims often get labeled as “terrorists” before all the facts have come out.

Just consider President Donald Trump. This morning, Trump tweeted, “My warmest condolences and sympathies to the victims and families of the terrible Las Vegas shooting. God bless you!” That’s fine, but Trump doesn’t even seem angry. It’s peculiar that he didn’t call the shooter a “son of a bitch,” like he did the NFL players who took a knee during the national anthem. He didn’t create an insulting nickname for Paddock or make an immediate push for a policy proposal.

Compare that to how Trump treats incidents where he believes the assailants are Muslims. After a bomb exploded in the London subway, Trump tweeted that the attackers were “loser terrorists” — before British authorities had even named a suspect. He went on to immediately use the attack to push his Muslim ban.

We must ask ourselves: Why do certain acts of violence absolutely incense Trump and his base while others only elicit warm thoughts and prayers? This is the deadliest mass shooting in American history! Where is the outrage? Where are the policy proposals?

What we are witnessing is the blatant fact that white privilege protects even Stephen Paddock, an alleged mass murderer, not just from being called a terrorist, but from the anger, rage, hellfire, and fury that would surely rain down if he were almost anyone other than a white man. His skin protects him. It also prevents our nation from having an honest conversation about why so many white men do what he did, and why this nation seems absolutely determined to do next to nothing about it.

I spoke to two people this morning, one black and the other Muslim. Both of them said that, when they heard about this awful shooting in Las Vegas, they immediately began hoping that the shooter was not black or Muslim. Why? Because they knew that the blowback on all African-Americans or Muslims would be fierce if the shooter hailed from one of those communities.

Something is deeply wrong when people feel a sense of relief that the shooter is white because they know that means they won’t suffer as a result. White people, on the other hand, had no such feeling this morning, because 400 years of American history tells them that no such consequences will exist for them today as a result of Paddock’s actions.

It is an exemplar of white privilege: not just being given a headstart in society, but also the freedom from certain consequences of individual and group actions.

Top photo: People run from the scene of a mass shooting at the Route 91 Harvest country music festival on Oct. 1, 2017, in Las Vegas.