Deregulating exports of American small arms could increase gun manufacturers’ sales by as much as 20 percent. 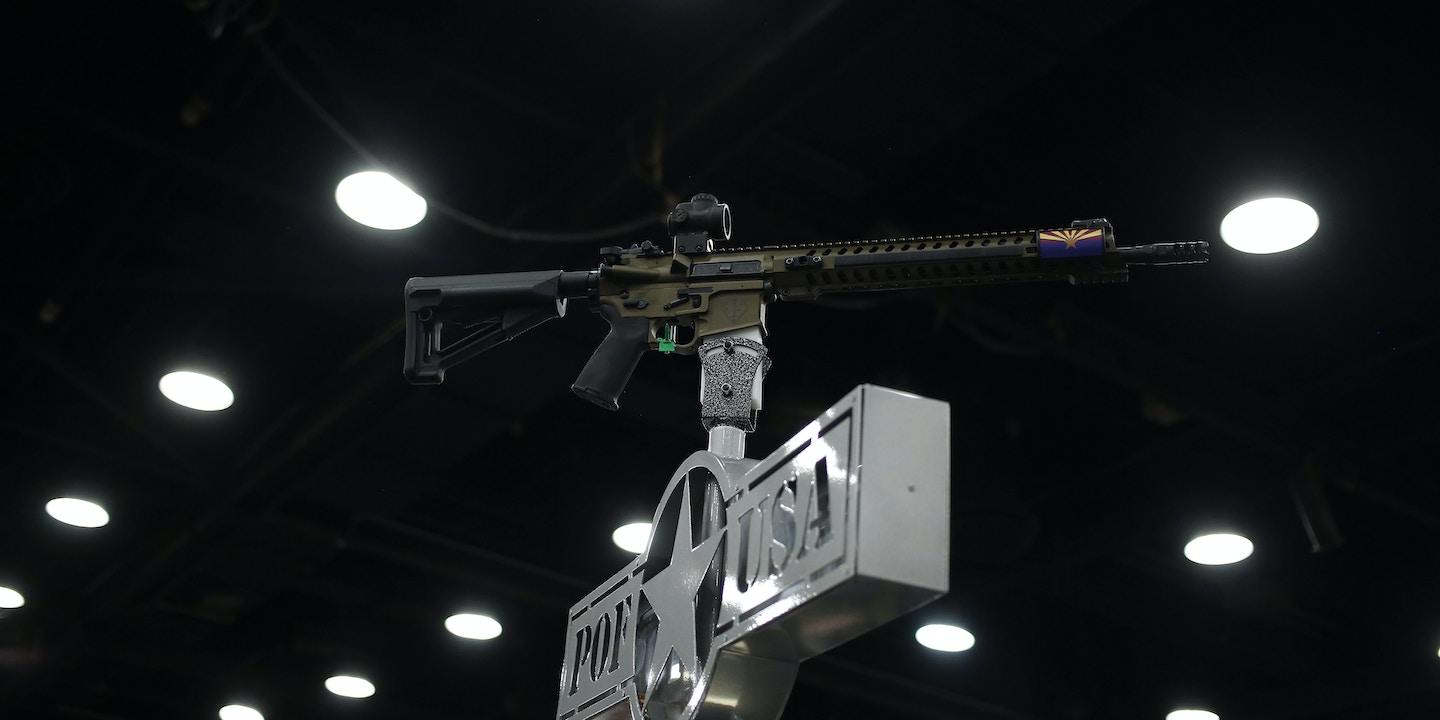 On Sunday, when 26-year-old Devin Patrick Kelley entered the First Baptist Church in Sutherland Springs, Texas, he carried a version of what the National Rifle Association has proudly called “America’s rifle.” Kelley used his Ruger AR-556, a variant on the enormously popular AR-15, to kill more than two dozen churchgoers.

AR-15 variants are perennial favorites for those who perpetrate America’s notorious mass shootings. An AR-15-style rifle similar to the one used by Kelley was the weapon of choice for Adam Lanza, who killed 27 people at Sandy Hook Elementary School in 2012. James Holmes, who shot almost 100 people in a Colorado movie theater the same year, used one, too. And Syed Farook and Tashfeen Malik, who massacred attendees of an office party in San Bernardino, California, less than two years ago, also did so with AR-15 variants.

Thanks to the Trump administration, “America’s rifle” is poised to go global.

In September, senior U.S. officials confirmed that the administration plans to diminish State Department oversight of non-military international firearms sales. Instead, it will give the Department of Commerce jurisdiction over this activity, with the explicit goal of easing regulation and boosting international arms sales.

“This will allow us to get in the (small arms sales) game for the first time ever,” an administration official told Reuters, which broke the story.

The plan promises to be a boon for American gun manufacturers. Shares of Sturm, Ruger & Co., which produces the rifle used in Sunday’s mass shooting, surged by nearly 15 percent following the September news. Exports currently account for only about 5 percent of the company’s sales.

The AR-15 gained its reputation among gun enthusiasts because it is a portable, lightweight, accurate, and customizable semiautomatic weapon — the civilian version of the M-16, the military’s longtime standard-issue rifle. The AR-15 typically carries a 30-round magazine, though 75- to 100-round magazines are available for sale in the U.S. In the aftermath of Sunday’s shooting in Sutherland Springs, dozens of emptied 30-round clips were found littered throughout the First Baptist Church sanctuary.

The rifle became commercially available in the U.S. when Congress allowed the Federal Assault Weapons Ban — which singled out the AR-15 specifically — to expire in 2004. In less than 15 years, millions of AR-15 variants have been sold to the American public. Kelley purchased his model in a San Antonio sporting goods store in 2016.

The AR-15 became commercially available in the U.S. when Congress allowed the Federal Assault Weapons Ban to expire in 2004.

The Trump administration’s plan to foster these kinds of sales the world over could increase annual firearm sales by 15 to 20 percent, according to Lawrence Keane, senior vice president of industry group the National Shooting Sports Foundation.

A government effort to open international markets to American gunmakers could be interpreted as a show of gratitude by the Trump White House. “You could really turn the spigot on if you do it the right way,” a senior administration official said of the plan.

The firearm lobby spent lavishly to elect Trump. Sturm Ruger donated $4 million to the NRA last year, and the NRA, in turn, spent more than $30 million to support Trump’s campaign.

Trump’s election, however, seems to have inadvertently suppressed domestic gun sales, reversing year-over-year growth under former President Barack Obama. Sturm Ruger was hit particularly hard; its profits shrank by half earlier this year. “I think there was a big hangover coming out of the election cycle that had to be worked off,” Ruger CEO Christopher Killoy said on an analysts call earlier this year.

The Trump administration’s plan to boost international gun sales does not require congressional approval, and officials told Reuters that it could be implemented during the first six months of 2018. A State Department official reached by The Intercept would not respond to queries about the proposed policy, except to express the administration’s commitment to easing regulation. “This administration is committed to reducing regulatory burden and encouraging U.S. exports. We are reviewing all possible steps that could help us achieve those goals while protecting America’s national security,” the official said. “All arms transfers are made in accordance with U.S. law and are reviewed under the conventional arms transfer policy, which includes consideration of end use and human rights.”

Three Democratic senators cautioned Secretary of State Rex Tillerson against the proposed change in a September letter, noting that small arms are the “primary means of injury and destruction in civil and military conflicts throughout the world.”

The government’s effort to simplify export controls on small arms began under Obama in 2009, but the plan lost momentum as deadly mass shootings on U.S. soil captured headlines throughout the past decade. It’s unclear yet if the Trump administration has any such scruples.

Top photo: An AR-15 rifle is displayed on top of a booth on the exhibit floor during the National Rifle Association annual meeting in Louisville, Ky., on May 20, 2016.