Saudi Arabia has all the advantages in its rivalry with Iran — and still falters at every step. 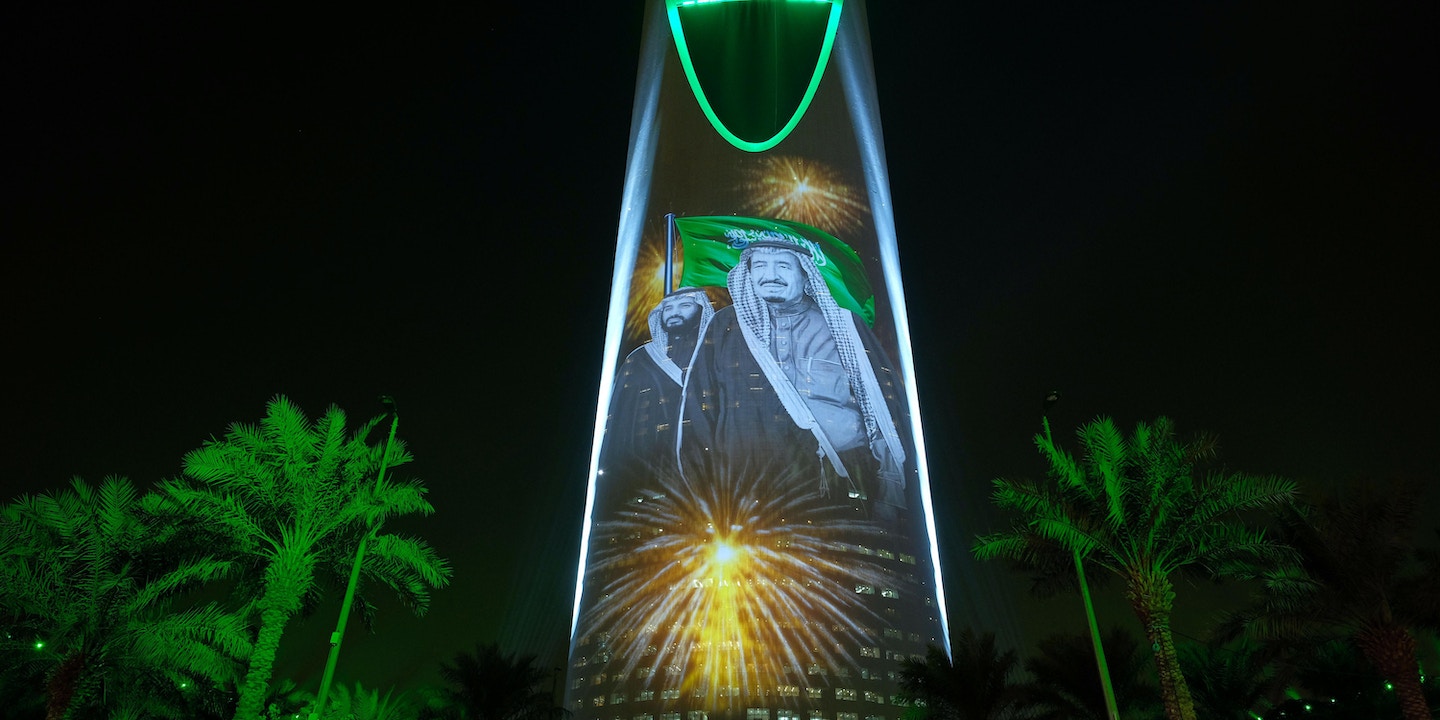 Saudi Arabia should be a very powerful country. Endowed with one-fifth of the world’s proven oil reserves, close ties with powerful Western states, access to endless amounts of U.S. weaponry, the support of global corporate interests, and the religio-cultural cachet afforded by stewardship of Muslim holy sites, the kingdom should by all accounts be an undisputed regional powerhouse.

Suffice to say, this is not the case, as a quick glance at the Middle East today reveals.

Saudi foreign policy is floundering in a way that would be comical if it didn’t involve so much human devastation. Under the newly minted leadership of Mohammed bin Salman, the Saudi government is stuck losing every proxy war that it is involved in. It has failed to bring their diminutive Gulf rival Qatar to heel and most recently humiliated its own ally, the Lebanese Prime Minister Saad Hariri, in what appears to be a tragicomic attempt to destabilize the Lebanese government.

Saudi Arabia is often criticized for being the seedbed for radical Islam, but this might be just a symptom of a deeper problem: the radical incompetence of its leadership. Since the 1975 assassination of King Faisal bin Abdulaziz — the last ruler widely seen to have promoted a positive image of the country — Saudi Arabia’s foreign policy has been catastrophically adrift. Despite spending exorbitant sums of money to spread its influence, the kingdom’s leaders appear more and more besieged — at war not just with Iran and its allies, but with Qatar, the Muslim Brotherhood, and internal rivals.

It’s worth comparing Saudi Arabia to another country in its region that it actually has a lot in common with: the Islamic Republic of Iran. Despite their sectarian and ethnic differences, in many ways the two rivals are more similar to each other than the rest of their neighbors. Both are repressive petro-states that employ state religion as a tool for keeping their people in line. Both try to use sectarian identity as a way to cultivate their influence abroad. And both are seeking to establish themselves as regional hegemons, heedless of the destruction that their efforts cause.

There are real differences, of course: Iran is an international pariah, commands a fraction of Saudi Arabia’s resources, and seems to be permanently on the brink of being bombed into oblivion by an unremittingly hostile United States.

Yet Saudi Arabia, despite its innumerable advantages, has proven to be infinitely worse than Iran at the sordid game to win power in the region.

Although the rivalry between the two countries is sometimes portrayed as the continuation of a supposed primordial conflict between Sunni and Shia Muslims, the actual roots can be found in a more recent history: the upheavals of 1979. 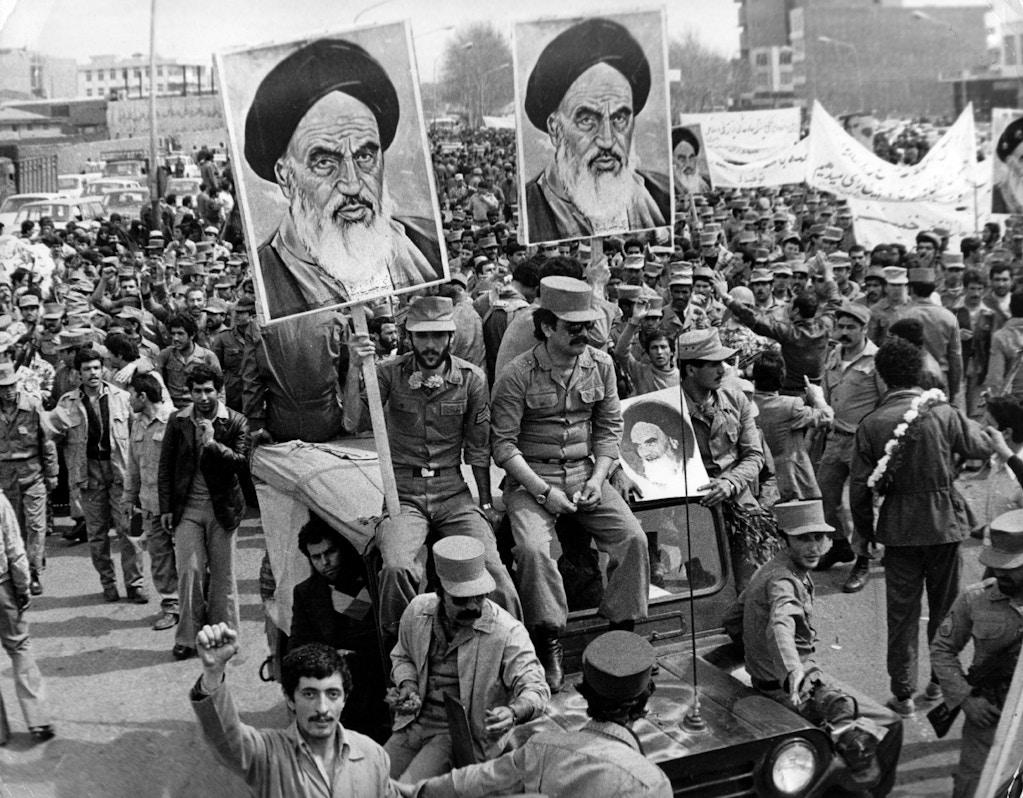 The Iranian Islamic Republic Army demonstrates in solidarity with people in the street during the Iranian revolution in 1979. They are carrying posters of the Ayatollah Khomeini, the Iranian religious and political leader.

In 1979, Iran underwent its Islamic Revolution and began zealously exporting its revolutionary ideology throughout the Muslim world; the new Islamic Republic pushed a politicized version of Shia Islam developed by Ayatollah Khomeini during his long years in exile. Saudi Arabia, meanwhile, was spooked by the demise of a fellow monarch, the revolutionary sentiments of the new Iranian leaders, and by an ill-fated millenarian uprising in Mecca that year. Saudi Arabia’s response to the uprising was to ramp up an effort parallel to the Iranians attempts to export the revolution, with the aim of promoting a fundamentalist version of Sunni Islam at home and abroad; the ostensible purpose was for Saudi Arabia to win influence in the region and in the wider world.

While Iran is looked to by many Shia political groups around the world as a model and source of support, Saudi Arabia is openly loathed by Sunni Muslims across the ideological spectrum, with the handful of exceptions made up by those directly on its payroll. Iran can count on the support of loyal Shia militias in Lebanon and Iraq, and yet many of the Sunni militant groups spawned by Saudi Arabia’s extremist proselytizing routinely declare war on Saudi leaders for being insufficiently extremist.

The contrast of Sunni disunity and Shia coalescence can be chalked up in part to how Saudi Arabia and Iran treat their respective sectarian communities. Iran’s alliances have allowed for independent political structures that the Islamic Republic does not directly control and command; it supports Shia groups like Hezbollah in Lebanon, Shia Iraqi militias, and the Houthis in Yemen, which all maintain some degree of autonomy in their decision-making. Iran even allows for groups and actors with heterodox Shia beliefs to come into its fold and is glad to co-opt some Sunni groups and religious minorities that are willing to work under its leadership.

Saudi Arabia, on the other hand, worked in concert with its ultra-conservative clerics, to wage an ideological war against local forms of Sunni Islam and Sufism, extending the battle to grassroots populist Islamist movements like the Muslim Brotherhood. These crackdowns created untold numbers of enemies, yet Saudi Arabia’s friends remain unclear, beyond a handful of clients and tiny, neighboring sheikdoms. With a few exceptions, Saudi Arabia’s engagement in outright sectarian hostility has also prevented it from coopting dissident Shia movements and helped push them instead into Iran’s orbit.

For all its largesse, for all the cultural cachet granted by controlling the holy cities of Mecca and Medina, Saudi Arabia has proven unable to use soft power to improve its image in the Muslim world, let alone create powerful proxies like Iran’s allies in Hezbollah. Beyond transactional relationships with other countries and nonstate actors, Saudi Arabia seems unable to accept allies that don’t march in complete lockstep not only with the regime’s particular religious beliefs, but also its absolute authority.

Iran’s leaders have committed many crimes since the revolution, and the international community — led by Iran’s chief antagonist, the United States — has let the world know about it. Yet Saudi policies continue to bring down international condemnation in a measure that rivals the Islamic Republic — despite the frequent shield of U.S. backing. For a brief moment, it seemed like the Saudis could claim the moral high-ground when the Iranians found themselves in the unpopular position of supporting a mass-murdering dictator in Syria. But Crown Prince Mohammed bin Salman ceded whatever relative moral authority the kingdom might have claimed by engineering what may be an even larger humanitarian catastrophe in Yemen, where a U.S.-backed, Saudi-led coalition wages a brutal, ongoing war.

Lacking popular support or reliable allies in the Muslim world, Saudi leaders have begun to touch the third rail of Middle Eastern politics by publicly embracing Israel. Even in the U.S., where the Saudis have spent considerable resources on lobbying and public relations, they have singularly failed at improving their country’s image. While the kingdom has managed to utilize the culture of institutionalized corruption in D.C. to build elite relationships, its soft power with the U.S. public is close to nil. Even Iran, to which American political and media structures are ceaselessly hostile, has its tactful foreign minister Javad Zarif and smiling president Hassan Rouhani in public seeking to revitalize the county’s image. Saudi Arabia has no comparable presence — and indeed no comparable figures who could pull it off.

Even a country so blessed with resources and advantages cannot endure forever under such catastrophically incompetent and wasteful leadership. As some U.S. elites fawn over the kingdom’s announcements of piecemeal reforms and bizarre plans to build robot-cities in the desert, a slow but inexorable unraveling lurks in the background. A century after it was first created, Saudi Arabia is recklessly adrift in a world that is suffering for it.

Top photo: This photo released by the Saudi Culture and Information Ministry shows the image of King Salman and Crown Prince Mohammed bin Salman projected on the Kingdom Tower during National Day ceremonies in Riyadh, Saudi Arabia, on Sept. 24, 2017.

The Crisis of Care