Nebraska approved the Keystone XL pipeline Monday, eliminating a major hurdle to construction of a project that galvanized opposition across the country. 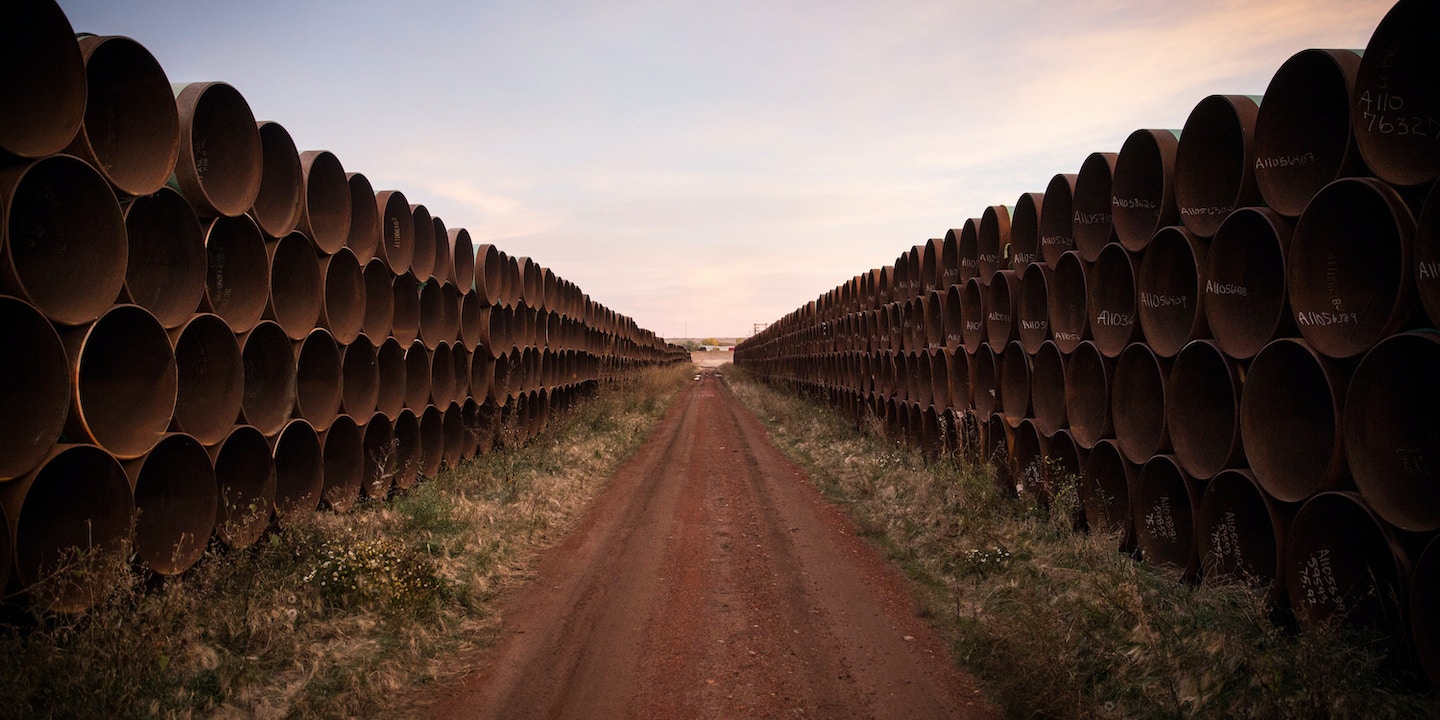 Nebraska’s Public Service Commission approved the Keystone XL pipeline Monday, eliminating a major regulatory hurdle to construction of a project that galvanized people across the U.S. into opposition. The decision comes days after the existing Keystone pipeline, to which the KXL will connect, spilled an estimated 210,000 gallons of oil onto agricultural land in South Dakota. To many pipeline opponents motivated by the inevitability of a spill, the contaminated land proves their point.

Those who have been fighting the pipeline for more than five years, and many more drawn into opposition via last year’s dramatic confrontation at Standing Rock, say the approval of KXL marks the beginning of the next phase of the pipeline battles. Opponents in Nebraska will have 30 days to appeal the decision and have promised lawsuits. “We have to do everything we can in order to make sure that this pipeline never gets built,” said Bold Nebraska founder Jane Kleeb in a press conference after the decision.

Meanwhile, organizers are preparing to stand in the way of construction. A coalition including several tribes, native-led organizations, and environmental nonprofits released a call to action, asking people to sign up to “commit to creative peaceful resistance along the pipeline route when construction begins on KXL, likely next spring.” The statement asserts that anyone traveling to resist must undergo a training and remain peaceful.

Monday also marked the one-year anniversary of one of the most aggressive police actions against Dakota Access pipeline opponents, when police sprayed protesters with water cannons in freezing temperatures. Indeed, the new Keystone XL fight will take place in a climate where anti-pipeline organizing has become increasingly criminalized.

Last month, 84 members of Congress — including four Democrats from Texas — signed a letter to Attorney General Jeff Sessions asking whether domestic terrorism laws could be used to prosecute individuals shutting down oil pipelines. In response to queries about the letter, the Department of Justice told Reuters earlier this month that it would aggressively prosecute anyone who damages “critical energy infrastructure in violation of federal law.”

In anticipation of the Keystone XL’s construction, legislation was passed in South Dakota in March that allows the governor or a local sheriff to prohibit groups numbering more than 20 from gathering on public land or in schools, and also allows the Department of Transportation to limit access to highways by prohibiting stopping or parking in designated areas. 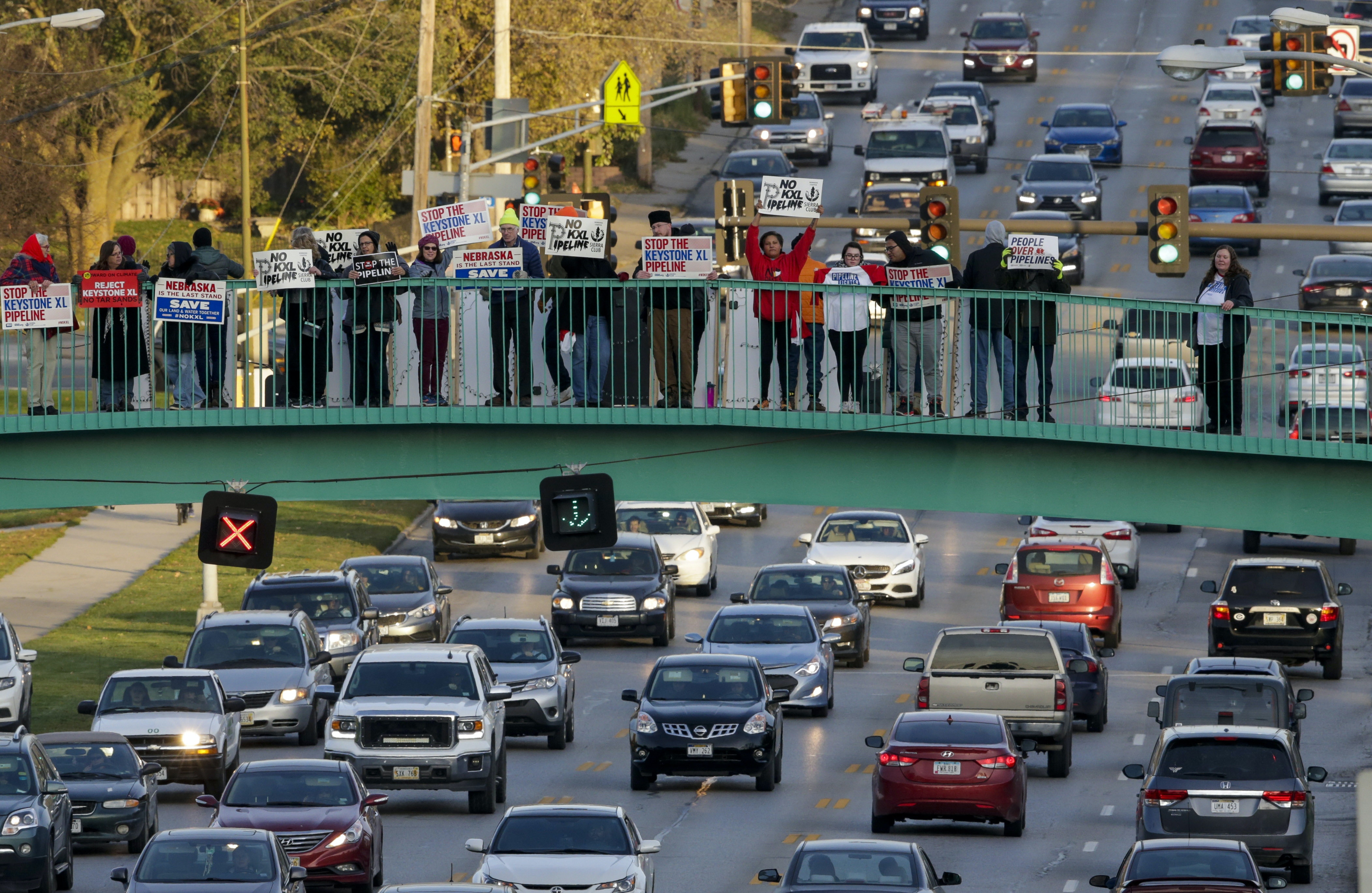 Opponents of the Keystone XL pipeline demonstrate on the Dodge Street pedestrian bridge during rush hour in Omaha, Neb., Nov. 1, 2017.

Law enforcement officials in Nebraska and other states have meanwhile been studying the policing of the Dakota Access pipeline protests. Morton County Sheriff Kyle Kirchmeier, who led the law enforcement response at Standing Rock, told the Omaha World-Herald that South Dakota officials had asked him to discuss with them the lessons he learned policing the movement, adding that he also intended to meet with Nebraska officials.

Construction cannot begin immediately. The approved route would require the TransCanada pipeline company to obtain easement agreements with an estimated 40 new property owners who were not previously part of the process.

Also standing in the way of the pipeline’s completion is a market that has become less inviting to tar sands oil development, with crude prices dropping dramatically over the past five years. TransCanada has not yet confirmed that it will go ahead with the project, though the company suggested in a recent statement that it had received sufficient interest from oil producers to move forward.

TransCanada’s president and CEO, Russ Girling, issued a lukewarm statement Monday: “As a result of today’s decision, we will conduct a careful review of the Public Service Commission’s ruling while assessing how the decision would impact the cost and schedule of the project.”

Another controversial TransCanada tar sands pipeline, Energy East, which would have carried 1.1 million barrels of tar sands oil per day from Alberta to Canada’s Atlantic coast, was canceled by TransCanada in early October. Although the decision was celebrated by environmentalists and indigenous opponents, it created an opening in the market for Keystone XL, which would pump 830,000 barrels of oil per day from Alberta through Montana, South Dakota, and Nebraska.

Before President Donald Trump’s election last November, Keystone XL was dead. In 2015, the U.S. State Department denied TransCanada a key border-crossing permit, with President Barack Obama declaring that the pipeline’s approval would have undercut the nation’s global leadership on climate change action. But days after his inauguration, Trump issued a memorandum encouraging expedited approval of the pipeline — an early confirmation of his administration’s abandonment of U.S. climate leadership.

Organizers have been preparing for the possibility of construction ever since. Until Monday, Nebraska stood in the way. The state’s Public Service Commission was tasked with determining if the pipeline was in the state’s public interest, although it was bizarrely not allowed to consider the possibility of oil spills or the issue of pipeline safety in its decision-making process. Landowners whose property would be taken by TransCanada via eminent domain have promised to continue to fight the pipeline.

Meanwhile, Keystone XL opposition in South Dakota, which has long been led by Lakota, Nakota, and Dakota tribal members, has been re-shaped by what happened at Standing Rock. According to Remi Bald Eagle, the intergovernmental affairs coordinator for the Cheyenne River Sioux tribe, the pipeline violates the same 1851 and 1868 treaties that were in question with the Dakota Access pipeline. “The Cheyenne River Sioux tribe will fight the Keystone XL pipeline by any means necessary,” he said. The pipeline cuts right past the southern border of the tribe’s reservation.

Small anti-KXL camps in South Dakota were precursors to the massive anti-Dakota Access camps in North Dakota. Now the movement returns to its roots. New indigenous-led KXL opposition camps opened as soon as the NoDAPL camps were forcibly shut down last February.

But the Keystone XL fight, organizers say, will not be another Standing Rock. In fact, repeating what happened there is exactly what some of the most ardent pipeline fighters intend to avoid.

Joye Braun is helping run a small KXL resistance camp on the Cheyenne River Sioux reservation in Eagle Butte, South Dakota, supported by the tribal government. Braun predicts campers will eventually move closer to the pipeline’s route, in order to be well-positioned for direct action protests. “We are still working with my tribe and with our spiritual leaders to determine the best use for the campers at that point.”

Some of the rethinking has to do with a sharpened conception of the risk of surveillance. Documents published by The Intercept confirmed that contractors working for TigerSwan, the private security firm hired by Energy Transfer Partners to monitor the pipeline protests, posed as protesters inside the DAPL resistance camps, apparently in an effort to gather intelligence and sow discord.

Although it’s unclear whether TigerSwan personnel visited Eagle Butte, the camp is mentioned in multiple daily reports from March and April that were leaked to The Intercept by a TigerSwan contractor. A report from April 8 describes in detail the layout of the camp and the number of people there, calling it the “sustainment hub and central coordination point for protestor activities against Keystone XL.” Braun is mentioned by name in the documents. There is no evidence TigerSwan has worked for TransCanada.

This time, any front-line camp will be smaller, more native, and more controlled, Braun said, with visitors vetted. “If we can vet that person and prove them, yeah, we’ll let them in.”

A second anti-Keystone XL camp is in place on the Lower Brule Sioux reservation. “We want to have that security culture, but at the same time, we’re not really doing anything,” said Manape Lamere, who has been involved with the camp since May. Lamere said campers are working on developing a renewable energy system that he hopes could be replicated across Sioux reservations. “It’s more than a revolution, we’re building a country,” he said. Pipeline organizing has spurred a renewed interest in the fulfillment of treaty rights and native nation-building, especially among younger generations of Lakota, Dakota, and Nakota people. The Lower Brule camp was playing host to a gathering focused on treaties as the Keystone XL decision came through.

Members of that camp have also noticed that they have been subject to surveillance. For example, Lamere said an FBI agent questioned his friends and associates after Lamere posted on Facebook suggesting opponents attack the Dakota Access pipeline. “I meant attack as in protest, but the FBI took it as an actual attack, so they were going around asking my friends if I’m capable of blowing up a pipeline,” he said. Lamere was questioned and ultimately took the post down, concerned that friends who had liked or commented on it would be pressured into developing relationships with law enforcement.

Responding to a request for comment, FBI spokesperson Nora Scheland stated, “I have no comment, as it is our policy to neither confirm nor deny the existence of an FBI investigation.”

An earlier version of this story incorrectly stated that two Democrats from Texas signed the letter to Sessions. There were four Texas Democrats who signed.

Top photo: Miles of unused pipe, prepared for the proposed Keystone XL pipeline, sit in a lot on Oct. 14, 2014, outside Gascoyne, N.D.