In the immediate aftermath of the failed terrorist attack in New York’s Port Authority transit hub on Monday, there was a notable absence of panic. 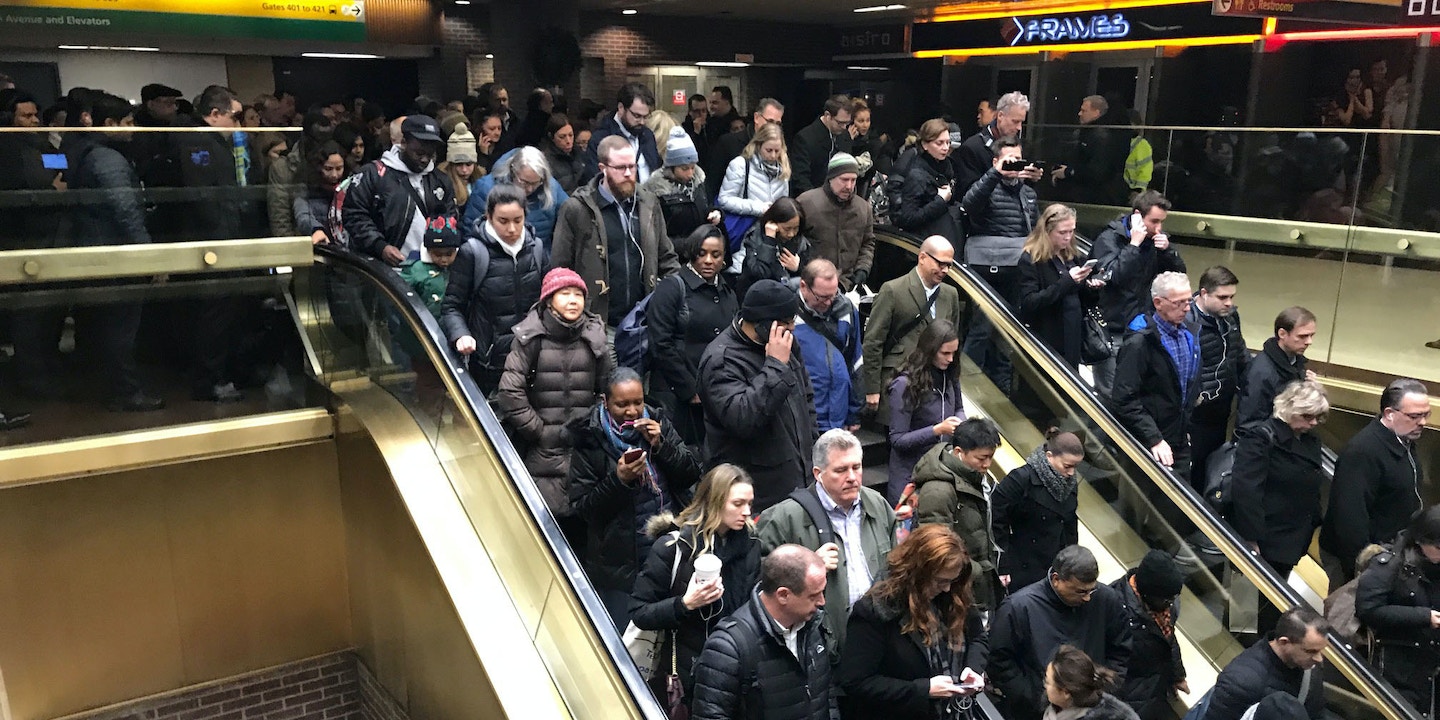 In the immediate aftermath of the failed terrorist attack in New York’s Port Authority Bus Terminal on Monday, there was a notable absence of panic, as New Yorkers absorbed the news that no one had been killed and quickly moved on to grumbling about the inconvenience of a subway station being closed at rush hour.

Jamie describing the “ripple effect” of delays across the city as a result of the Port Authority closures pic.twitter.com/ER2BXo8jNJ

Witnesses inside the station said that about half a dozen people in the immediate vicinity ran for safety when a man, identified by police as a 27-year-old immigrant from Bangladesh, Akayed Ullah, set off a small bomb, seriously injuring only himself. However, there was scant evidence of what the far-right Drudge Report, aggregating British tabloid reports from afar, described as a “stampede” of passengers fleeing the station. Instead, news photographs and video showed a calm, orderly evacuation.

In one particularly striking image shared by Reuters online, dozens of commuters, many absorbed in checking their phones, rode escalators that slowly transported them out of the Port Authority onto Ninth Avenue.

Video recorded on the other side of the station showed a placid scene there, too, as tourists craned their necks for a view of police gathered outside.

The tangible calm on the streets of New York contrasted sharply with the frenzied reaction of far-right bloggers living far from the city, like Jayda Fransen, a fringe British activist whose anti-Muslim rage tweets have been amplified by the president of the United States.

New York’s leaders, meanwhile, encouraged city residents to get on with their lives. Gov. Andrew Cuomo argued that by refusing to be terrorized, New Yorkers were denying terrorists a victory.

Let’s get back to our daily business. We will never allow them to disrupt us. That’s exactly what they want.

As Mayor Bill de Blasio noted, the relative calm on Monday echoed that of the city just over a month ago, in the wake of a deadly terror attack in which a young immigrant killed eight people on the bicycle path along the West Side Highway. “This is the most resilient place on Earth,” the mayor said outside the station. “We’ve proven it time and time again: We proved it just over a month ago; we proved it on 9/11; we’re going to prove it again today. The terrorists will not win, we are going to keep being New Yorkers. Let’s get back to work.”

Those words of reassurance, and the acknowledgement that terrorist attacks can be limited but never entirely prevented, were similar to statements made in June by London’s mayor, Sadiq Khan. President Donald Trump, who was strangely silent about the attack in his native city on Monday morning, had taken the mayor of London to task at the time for supposedly minimizing the importance of terrorism by urging Londoners to keep calm and carry on after attackers had killed eight people.

Trump’s criticism of Khan was condemned across the political spectrum in Britain, not just because it came as the city’s leader was coordinating the response to a deadly attack, but also because Londoners take pride in their unwillingness to be cowed by terrorists. That attitude of stoicism and defiance has roots in the British capital’s response to Nazi air raids during the Second World War intended to terrorize the civilian population and was later reinforced by decades during which Irish Republican Army bombings became almost routine.

On the evidence of Monday, New Yorkers appear to be developing a stiff upper lip of their own by refusing to panic in the face of ongoing terrorism. To appreciate what a potentially seismic shift in American political discourse this might be, it is useful to recall that the Democratic nominee for the presidency in 2004, John Kerry, was widely ridiculed for advocating just such a response to terrorism. “We have to get back to the place we were, where terrorists are not the focus of our lives, but they’re a nuisance,” Kerry told The New York Times Magazine a month before that year’s election. “As a former law-enforcement person, I know we’re never going to end prostitution. We’re never going to end illegal gambling. But we’re going to reduce it, organized crime, to a level where it isn’t on the rise. It isn’t threatening people’s lives every day, and fundamentally, it’s something that you continue to fight, but it’s not threatening the fabric of your life.”

Kerry’s remarks, an implicit criticism of the “war on terror” mentality that had led to the disastrous invasion of Iraq, were criticized at the time by President George W. Bush, who accused his rival of failing to embrace his determination “to defeat terror by staying on the offensive, destroying terrorists, and spreading freedom and liberty around the world.”

There is a danger, of course, of tilting too far in the other direction and treating terrorist attacks as no different than fatal car accidents or natural disasters, random occurrences with no connection to history, politics, or government policies. That tendency can be glimpsed in places like Israel, where outbursts of violence by Palestinians living under military occupation for five decades are understood by large swathes of the population as entirely unconnected to any actions taken by them or their government.

In the same way, Americans who ignore the role their government plays in the turmoil and injustice of the Middle East might well think that there is no need to understand the roots of terrorism, and simply sign off on mass surveillance and targeted assassination campaigns, which in turn could provoke more hatred and despair.

Top photo: After a bombing at New York’s Port Authority station on Monday, commuters rode escalators out of the transit hub.